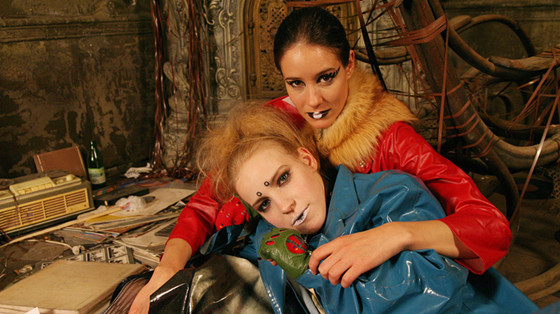 Igor Voloshin’s feature-length debut could be summarized as a new wave-techno-glam-goth-punk melodrama which speaks of the healing/lifesaving power of friendship, as well as of the numbness of a contemporary man’s soul. It focuses on a “powerful” female duet of Alisa and Vel who roam the land of the “living dead” and try in vain to extinguish the flame of suffering.

The feminist-oriented screenplay of Olga Larionova thematizes loneliness as the main motive for skipping reality and the loss of identity in a society gone haywire. Trapped in the cage of deceits and bogus passions, the blinded characters whose extravagant appearances reflect their spiritual emptiness forget that the bars won’t protect them from death.

Although the dialogues are far from being the best this film has to offer, Voloshin directs solidly, whereby Olga Sutulova (Alisa) and Mariya Shalayeva (Val) handle their parts with competence. However, the show stealers are the boisterous makeup and shockingly fabulous costume design by Nadezhda Vasileva and Anna Esmont, respectively.

DP Dmitriy Yashonkov gives each color, whether it comes from a neon sign or a printed dress, a symbolic value, while glorifying the beauty of eccentric heroines in compositions which give the impression of the fashion magazine clippings. 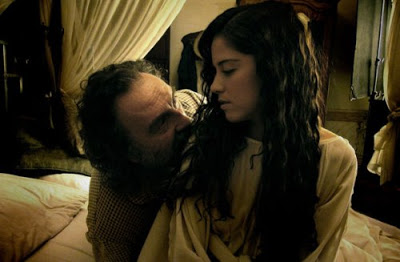 “That which is purgatory for humans is only the soul’s prison through the body.” – Juan Rulfo

Based on the writings of Mexican literate Juan Rulfo, an arthouse drama anthology Purgatory (Purgatorio) is divided in three parts, each revolving around the suffering of “ordinary people” an each with the smell of death.

Northern Passage (Paso del norte) is the first chapter which takes us back to the forties of the 20th century and deals with the themes of emigration (i.e. searching for a better life) and destruction of a family.

Following is A Piece of Night (Un pedazo de noche) that introduces an unusual and tragic romance between a gravedigger and a prostitute. The last, but not the least is the longest story with a slightly incestuous subtext. Titled Cleotilde after a young orphan girl who marries an elderly and wealthy land owner, Don Julio, it spins a tight web of memories, lies, sex, jealousy and murder.

The first two “episodes” possess the charm of old photographs tinted by hand, whereby the third one brims with a dreamy, nostalgic atmosphere of earthy tones complemented by the piano-heavy score. And their classy aesthetic is not their only quality…

Ermek Tursunov’s feature debut Kelin (which literally translates as daughter-in-law) is a marvelous historical (melo)drama. The tragic, universal story of love, passion, jealousy and revenge is bound by the chains of tradition (i.e. shamanistic rituals) and set in the far past of Kazakhstan, on the slopes of the Altai Mountains.

Contrary to our expectations based on the bride-buying prologue, Kelin’s nature is of the feminist kind – it is a woman who procreates and preserves a family even after a man’s departure.

Told without a single dialogue (only a few spells are spoken), it is an excellent example of “show, don’t tell” technique. Relying upon the breathtaking environment and its “voices”, the intoxicating music of Edil Husainov and the hypnotizing cinematography of Murat Aliyev, the author goes beyond the simplicity of the narrative and delivers a distinct work of art.

His efforts wouldn’t have resulted in success, if the ensemble of non-professionals hadn’t been so amazingly good in crying, laughing, growling, screeching, whispering and gesticulating a wide range of emotions. 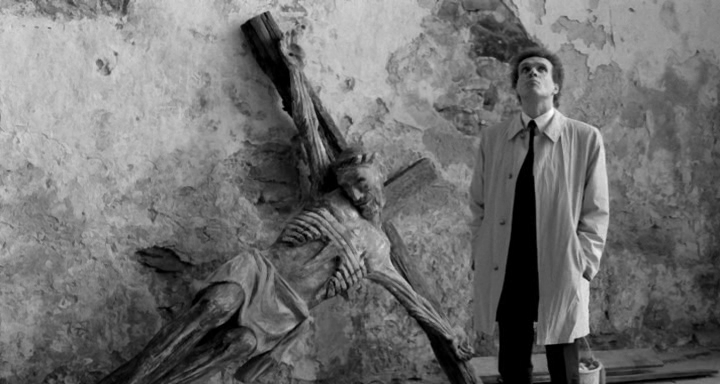 The quoted question, repeated one more time, exposes the film’s existentialist (or is it nihilistic?) nature. A middle aged factory manager, Tõnu (Taavi Eelmaa in a career-defining role), attempts to determine if he’s really good as everybody else says (or thinks) and if that (goddamn!) goodness keeps him from living to the fullest.

After returning from his father’s funeral interrupted by a bizarre car crash, Tõnu is (willingly?) thrown into a desolate alternative world ruled by nightmare logic and rife with derelict buildings, mud and bare forests. On a meandering road, surrounded by the people who are no longer humans, he gets lost between reality and fantasy, almost constantly stuck in a surreal situation.

Rich with (ambiguous) metaphors, The Temptation of St. Tony (Püha Tõnu kiusamine) never ceases to surprise its viewers, presenting them with a lot of challenges. Veiko Õunpuu maintains complete control over the helm, as he applies what he learned from the masters – Buñuel, Bergman, Kubrick, Tarkovsky and Lynch. 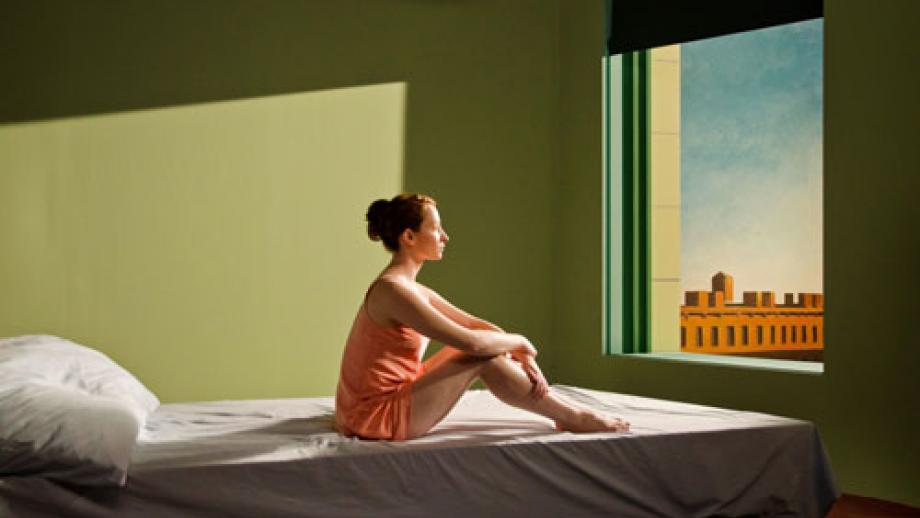 The famous Charles Caleb Colton’s quote is redefined by the Austrian multidisciplinary artist Gustav Deutsch – in his latest film, imitation becomes a powerful tool for reviewing the (American) past. His sincerest admiration of Edward Hopper’s art is demonstrated through the live-action reproductions of thirteen paintings transformed into the episodes from the life of a fictitious (and immortal?) actress.

According to the official synopsis, Shirley is an attractive, charismatic, committed and emancipated woman who desires to change the course of history with her personal, professional and socio-political engagement. She does not accept the reality of numerous turbulent periods as given but rather as adaptable. Her attitudes are expressed via the monologues of the unconventional narrative which takes us back to the 30s, 40s, 50s and early 60s of the 20th century.

From the first to the last shot, both in the Chair Car, Deutsch remains consistent in his approach to mimicking his idol’s succinct, immersive compositions. Even when he deviates from the original works – whether by highlighting a detail or changing the position of human figures – he stays true to Hopper’s colors, geometry and the use of light and shadows. 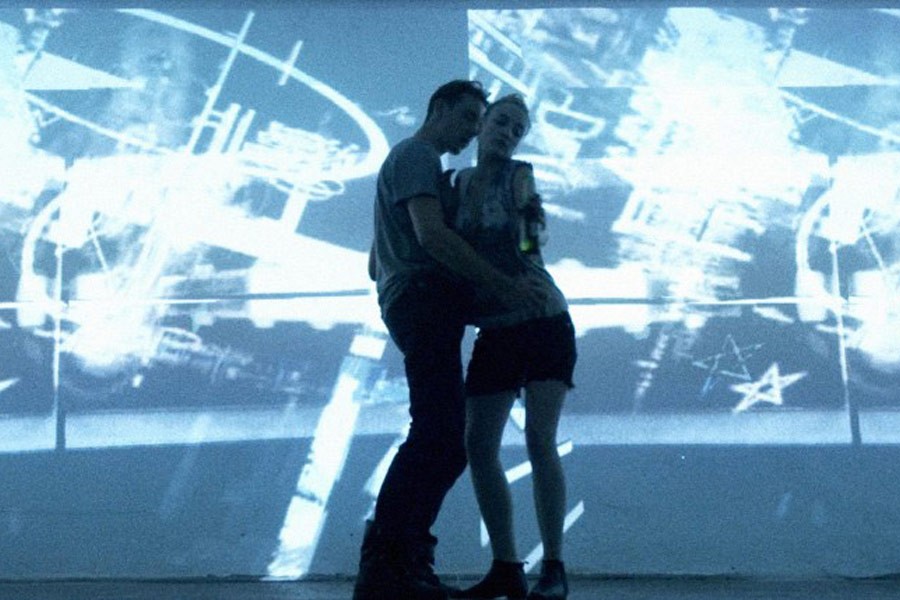 In his directorial feature debut, Krzysztof Skonieczny who’s famous for authoring music videos in his native Poland, paints a bleak portrait of today’s generation, disoriented or maybe lost forever. Inspired by Greek three-act tragedy, he spins a provocative and enigmatic story about “a desperate search for identity”, as well as of “guilt, impossible love, revenge and punishment” (as stated on the official webpage).

Skonieczny and his DP Kacper Fertacz combine long takes with dynamically edited shots, quasi-documentary and music video aesthetics to create a visually unsettling film whose quiet surface conceals the smoldering of anger. With drab grays and bluish tones, they depict the world that progressively disappears in the hands of those “who would rather burn than freeze to death”, like an (anti)hero Marcin.

Silent, morose, handsomely mysterious, rebelliously charming and ostensibly restrained, he may be “just” a sociopath or the embodiment of some wrathful higher force – Borgman junior or even the antithesis of Pasolini’s The Visitor from Teorema.

We can not know for sure who or what he is, because his motives are not clear, but we can assume that he is a product of a self-destructive consumerist society which ignores the real problems and sinks deeper into the abyss of hedonism and pretending.

Whether it’s the negative criticism for his S for Sex, S for Secrets or something else at stake, Jill Wong (aka Wong Pak-Kei) turns over a new leaf and shoots a hyper-stylized, (anti)romantic drama with the elements of a (bloody) thriller. While exploring self-loathing, loneliness and the impact of childhood traumas, he claims that love is akin to sickness and delivers the story of a marginalized couple’s degenerate and turbulent relationship.

Because of his badly disfigured face, Kit is forced to languish in the shadows of a dilapidated hut, though his job as a contract killer is well-paid. But, when he meets Ting Ting who is also “marked” he decides to save her from the demimonde of prostitution, without even imagining that his life will become even more miserable.

Pak-ho Chau and Liddy Li, both models-turned-actors, are excellent as the fucked-up protagonists whose psychological scars are much bigger than the visible ones. As he slowly wins over the viewer’s sympathies, she transforms from a wounded doe into a sadistic and vengeful she-wolf. The threads that barely hold their kinky micro-family together are torn by their secrets revealed in the twist ending.

Wong’s pacing is not always precisely measured, but he delivers plenty of eye-candy with “acidic” yellows and greens which dominate glossy visuals, utilizing the edgy electronic score to intensify the mood of discomfort.