In a time when more and more American films are derivative and formulaic, cult films are a light at the end of the tunnel: bizarre, mysterious, and all-around unconventional, the world of cult film is hugely diverse but unified by one common attribute: diehard fanbases that see the worth in movies too unusual and uncommercial for mainstream acceptance.

The list of surreal cult films is seemingly endless and there’s no way to cover even just the highlights in one article, but this list provides a brief introduction to some of the strangest and most worthwhile cult films kept alive by niche but impassioned audiences worldwide.

House is what happens when a major studio in Japan hires an experimental filmmaker to direct the Japanese response to Jaws. What came out of that ill-conceived idea is arguably the oddest film to be restored, remastered, and released by the esteemed Criterion Collection: a laugh-out-loud psychedelic nightmare disguised as a haunted house B-movie, all based on ideas from the director’s 11-year-old daughter.

The plot starts off simply enough with a group of seven high school girls venturing off to an estranged aunt’s home for the weekend – not an unusual start for a horror movie.

The outrageous, pop-art visual style makes clear that the film has far stranger things in store for the audience, and as soon as the seven teenagers reach the mansion the film descends into campy anarchy. A cuddly yet sinister cat, a carnivorous piano, and an exceptional suspicious elderly woman are only a few of the perils that the girls face in the seemingly idyllic mansion.

Not even that summary can prepare you for the madness that is House though; this is a movie so bizarre, so hilarious, so consistently inventive that it attains some loftier place in cinema history than a typical midnight movie; it’s a truly indescribable cult oddity that, in terms of sheer ridiculousness, can’t and won’t ever be topped. 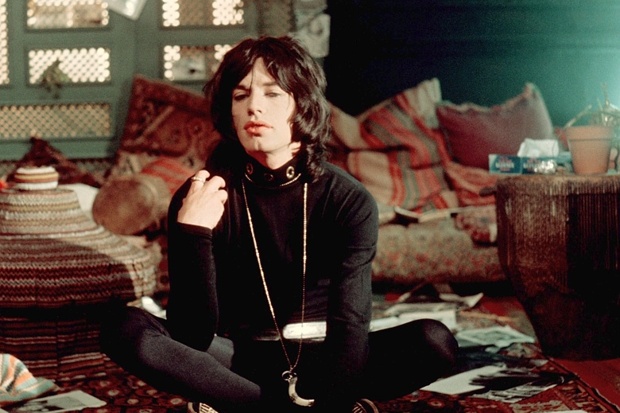 Nic Roeg is one of the foremost auteurs of European cinema, technically belonging to the British New Wave but rarely confining himself to such dismal and hyper-realistic territory. His films are instead marked by flourishes of psychedelia, innovative editing techniques, and, in many cases, musicians in lead roles. All of this is embodied in his directorial debut Performance, a crime thriller that seems ordinary enough until Mick Jagger pops his head into the story.

James Fox stars as Chas, a gangster on the run after he impulsively murders a friend of his boss. Chas ends up fleeing to the English countryside and winds up in the home of former rockstar Turner (Jagger, in his debut film role) who practices free love with his two housemates, experiments with drugs on the regular, and wears traditionally feminine clothing: a far cry from Chas’ brand of inflexible masculinity.

As Chas’ stay in the Turner residence drags on, he is gradually drawn into Turner’s freewheeling lifestyle until an unexpected dose of mushrooms changes everything, triggering one of the greatest psychedelic freakouts in all of cinema.

Unsurprisingly given its production at the tail end of the hippie era, the film features an abundance of unsimulated sex and drug use, yet all that excess and libertinism is matched by an air of intellectualism imbued by Roeg: beneath the (very literal) sex, drugs, and rock and roll, the film is ultimately a study of identity as well as a critique of masculinity and traditional gender roles – masculinity and identity can thus each by read as the “performance” of the title.

The result is a fascinating concoction that blurs the line between high art and hedonism, a strange and often bewitching film that could have only been produced in its particular time and place.

Alejandro Jodorowsky’s most famous work by far is his psychedelic opus The Holy Mountain – and, naturally, that makes it the most obvious choice for a list like this – but his previous film El Topo is just as deeply surreal and arresting.

Jodorowsky and his son co-star as an unforgiving gunfighter nicknamed El Topo and his perpetually naked son who travel across a vast desert on horseback to track down and kill the four greatest gunmen in the world; once the four are killed, El Topo is told, he will finally be named the best gunfighter.

Each of the men, in typical Jodorowsky fashion, embodies a different religion or school of thought, and they all preface their (outrageously violent) respective duels by engaging in thoughtful discussion with El Topo. The film takes a sharp turn halfway in, however, and goes from acid western to bizarre religious parable; but even before this shift though the film is heavily allegorical and filled with innumerable references to religion and Eastern philosophy.

It lies somewhere at the crossroads between a carnivalesque stoner film and a deeply spiritual art film, which surely isn’t for everyone, but its manic genius is nonetheless hypnotic for those who can appreciate it.

Describing Andrzej Zulawski’s horror-drama masterpiece Possession as disturbing is like calling the ocean big; it’s not incorrect, but it doesn’t quite say enough. Possession is disturbing to be sure – extraordinarily disturbing, actually – but it’s also visceral, thoughtful, tense, provocative, philosophical, and, above all, emotionally draining; a psychodrama, a creature feature, a political protest, and a lurid exploitation movie all merged into one unholy behemoth of an art film.

The film defies summarization, as the wild unpredictability and shock value of its narrative is what makes it so thrilling to watch, but in essence it follows the rapid disintegration of a seemingly idyllic marriage in West Germany after a wife (Isabelle Adjani) suddenly and unexpectedly asks her husband (Sam Neill) for a divorce.

Even from the start it’s made crystal-clear that the film is far more intense and high-strung than its traditionally melodramatic plot would suggest, and soon, in the immortal words of John Green, the narrative begins to fly off the rails “slowly, then all at once” in deeply grotesque and shocking ways.

Think Ken Russell’s The Devils married to Derek Cianfrance’s Blue Valentine, with John Carpenter’s The Thing acting as best man and Friedrich Nietzsche as the flower girl: dark, unpleasant, but ultimately insightful and intelligent. File this one under ‘Movies That Will Give You Vivid Nightmares For Weeks.’

Until very recently this was the most obscure and difficult-to-acquire film on this list, but thanks to a lavish 4K restoration by Cinelicious Pics and an imminent Blu-ray release Belladonna of Sadness will soon reach the hands of cinephiles everywhere, which is exactly where this oddity belongs.

A Japanese film directed by half of the team behind Astroboy and animated entirely by hand with gorgeous, vibrant watercolors, Belladonna is an occult psychosexual odyssey too artful to be condemned as pornographic yet just provocative enough to keep things interesting.

It’s a familiar Faustian tale with a vaguely feminist slant: a medieval peasant woman, after being violently raped by the people of her village, sells her soul to the devil – who is depicted with enough phallic imagery to make Freud faint – in exchange for power and, ultimately, revenge against those that committed and enabled the sexual violence against her.

On a visual level alone, the film is undeniably stunning – the art direction is indebted to a variety of disparate sources that run the gamut from Egon Schiele and Gustav Klimt to tarot cards and anime – but beyond that it’s simply a perfect clash of arthouse ambition and midnight movie vulgarity.

Fantastic Planet is like few other animated films released in the seventies or really, for that matter, released ever. Sure, it’s often described as trippy and mind-bending, but that doesn’t give it nearly enough credit; beyond the jazzy psychedelic soundtrack and brilliantly strange visuals, it’s a relatively political, more-than-relatively imaginative science-fiction film that communicates themes of pacifism and anti-racism without ever talking down to its audience.

The fantastic planet of the title is one of the moons of Ygam, which is the actual planet where the story takes place. On Ygam, humans, known on this planet as Oms, are not at the top of the food chain but are instead treated as pets, vermin, or slaves by the comparatively massive blue aliens known as Draags. The film chronicles the Oms’ revolt against the violent cruelty of the Draags as well as their attempts to establish a separate Om colony off-planet and in doing so restore peace between the species.

Their journey also doubles as a cross-planetary tour of Ygam as we are introduced to the many monstrous creatures and surreal landscapes of the planet along the way. It’s a complex, deeply immersive world, and one that is unlikely to be found in many other science-fiction films.

Ken Russell isn’t known for his subtlety or restraint, and Altered States ranks among his most unhinged works. Essentially a bad acid trip set to celluloid, the film uses disorienting visual effects and immersive sound design to transport the viewer to a bizarre psychedelic hellscape.

Although the real highlight of the film is the array of unsettling hallucination sequences, there is actually a rather conventional “scientist takes experiment too far” narrative buried beneath the psychedelia: William Hurt plays a scientist who enters a sensory deprivation chamber and take hallucinogenic drugs as part of an experiment in order to study the unconscious mind.

This being a sci-fi/horror film, things don’t go quite that smoothly and the film follows him down the rabbit hole as he first experiences disturbing visions during his experiments and eventually outside of the experiments as the effects of the experiment bleed into reality.

Although it does feel a little dated at times – namely during a stunningly misguided sequence with a caveman that is much more likely to elicit laughs than terror – it’s still a bizarre and wildly imaginative trip worth taking into the darker recesses of human consciousness.