Arguably the pinnacle of the Czech New Wave and without a doubt the most purely fun film of the movement, Daisies manages the perfect fusion of the accessible and avant-garde.

The film follows two teenage girls, both named Marie, who decide on a whim to start being bad; they start playing pranks that disrupt their rigid communist society, ranging from going on dates with elderly men to eating all the food at a private communist banquet before anyone arrives. The film becomes increasingly surreal and transgressive as the girls tear apart both Czech society and the film itself: there’s a scene in which they get in a fight and literally cut the screen into pieces with scissors.

All the chaos is organized by the unifying theme of female empowerment and an air of feminism that was hugely controversial at the time – the numerous anti-phallic visual gags and scenes in which the two protagonists mock men and the patriarchal establishment got director Vera Chytilova in trouble with the Czech authorities and the film was quickly banned in the country for “depicting the wanton.”

When viewed today, however, it’s easy to see how far ahead of its time the film is: Chytilova’s unrepentant commitment to social criticism at a time when that was considered a crime is admirable to say the least, and her gleefully anarchic approach to filmmaking is wholly intoxicating.

It’s impossible to write any kind of list on surreal films without bringing up the quintessential creepy midnight movie: David Lynch’s inscrutable and inimitable early-career masterpiece Eraserhead is one of the strangest films in his canon, which is saying something considering that he once made a 40-minute pseudo-sitcom about creepy anthropomorphic rabbits.

The film, although enigmatic through and through and lacking in any exposition of any sort, can be read as being about male anxieties about commitment and fatherhood; it follows Henry (Jack Nance, who went on to play Pete in Lynch’s cult TV series Twin Peaks), a soft-spoken young man who lives in a bleak industrial wasteland.

When Henry goes to meet his girlfriend Mary X’s family, he finds out that Mary recently gave birth to what is assumed to be his child. This being a David Lynch film, it’s no ordinary child: but rather a deformed little creature that more closely resembles a stillborn cow than a human.

It only becomes stranger and stranger as the narrative becomes increasingly to become irrelevant and the suffocating, unnerving atmosphere becomes the primary driving force of the film. The film set a clear precedent of nightmarish surrealism for Lynch’s later, somewhat more coherent work, but it still stands alone as a haunting, unsettling behemoth of low-budget filmmaking. 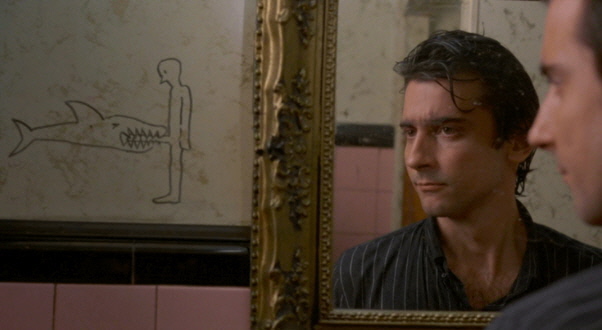 There are only two or three comedies in Martin Scorsese’s formidable filmography, yet, despite only dipping his toes into the genre a couple of times, he crafted what is arguably one of the most odd and original comedies of the 1980s in After Hours. “Original” may actually be the wrong word, as it’s loosely based on an NPR Playhouse monologue from 1982 and wears a number of other influences on its sleeve, but nonetheless few other comedies have such a joyful, free-wheeling kineticism to them.

Griffin Dunne plays the unfortunate protagonist, a word processor named Paul, who embarks on the strangest night of his life after getting stuck in SoHo, the Manhattan neighborhood across the city from his apartment.

One surreal event bleeds into the next as Paul is variously trapped with an obsessive waitress/amateur painter, accused of stealing bagel-shaped paperweight sculptures from an artist’s apartment, and lost in a hectic punk nightclub. The film’s paranoid sense of humor echoes the work of Franz Kafka, which is only fitting considering that at least one scene features dialogue adapted from Kafka’s Before The Law.

The incredible (and intentional) absurdity of the film’s rambling plot will surely frustrate some, but the joke-after-joke-after-joke screenplay – featuring an unforgettable, iconic exchange about The Wizard of Oz and orgasms – and consistently brilliant direction are more than enough to make this a hugely underrated highlight of Scorsese’s career.

Czech director Jan Svankmajer’s idiosyncratic stop-motion films are always slightly askew and unsettling, and no other film of his embodies that vague sense of unease like his first feature-length film, a loose adaptation of Alice in Wonderland titled simply Alice.

The film is widely considered to be nightmare fuel for many people who caught a glimpse of it on late-night TV as children, and they’re not entirely wrong: Svankmajer surely strips away the innocence and sweetness of the original story to expose a slightly darker, creepier undercurrent.

It’s more uncanny than frightening though, and the unexpectedly dark tone is often overshadowed by the ample artistry behind the film; the masterful stop-motion animation is a wonder to watch, and the time and effort put into even the most minute details is clearly visible from the start. It’s an imaginative, dream-like work often misinterpreted as a creepy children’s film, when it could more aptly be described as an animated film more designed for adults.

French New Wave director Alain Resnais and Nouveau Roman author Alain Robbe-Grillet brought both of their unique sensibilities together to craft what is indisputably the most enigmatic film of the New Wave, and maybe even of all-time. Last Year At Marienbad is very literally not supposed to make sense; it’s incomprehensible by design, intended to provoke audiences into considering the nature of fact and fiction.

The dreamlike narrative is broadly about a man who spots a woman at a hotel and is convinced that they met and had an affair at the same hotel the previous year; the woman disputes it and doesn’t even seem to recognize the man, and the audience is left to ponder in vain what actually happened between them, if anything.

It’s not a spoiler to say that the film never bothers to answer the central question of the narrative, and just about everything is left open to interpretation. Is it a romance? A time travel movie? A ghost story? All three?

Scouring the story for answers is beside the point entirely: the film is all dreamy atmosphere, unbelievably beautiful cinematography, and thought-provoking philosophical dialogue, a late surrealist masterpiece for the French New Wave generation.

David Cronenberg had already established himself as an auteur of the gruesome and grotesque by the early-‘80s, but Videodrome took his obsession with viscera to new heights.

Max Renn (James Woods) is desperately searching for provocative new programming for his obscure TV channel, and he finds just that when he stumbles upon a broadcast of Videodrome, a Malaysian TV show that broadcasts snuff films; people are violently tortured and murdered in an orange room, all in front of the camera and without any explanation.

Renn soon finds himself at the center of a bizarre conspiracy surrounding Videodrome after his girlfriend (Debbie Harry, of Blondie fame) becomes obsessed with the program and he begins to experience violent and disturbing hallucinations (or are they?).

Few films are able to disgust and captivate in equal measure, but Videodrome seems to pull it off seamlessly. The darker-than-dark narrative, truly horrifying special effects – including a blatantly vagina-like abdominal wound that has surely inspired countless nightmares over the years –, and sociological musings on the dangers of technology all come together to make Videodrome one of the most uncompromising and challenging films in Cronenberg’s canon.

Louis Malle is one of the most important directors of the French New Wave as well as an important figure in 20th century film history in general, but from his beginnings in the New Wave to his late critical peak with an assortment of more stylistically restrained films, nothing he ever made approaches the fairytale mystique of his 1975 film Black Moon, a bizarre outlier in his filmography.

While most of his films are grounded heavily in reality and often deal explicitly with intimate emotional topics, he bursts out of the gates in an explosion of fantastical imagery and dream logic with this, his most surreal and enigmatic film by far.

In escaping the battlegrounds of a war between men and women that has broken out across Europe, a teenage girl named Lily seeks refuge in a mysterious country estate where three bizarre characters reside: a brother and sister both also named Lily and an older woman who spends all her time in bed, talking to her pet rat and listening to the radio.

While she’s dealing with the increasingly outlandish events that transpire between these three characters, Lily is also preoccupied with chasing down an elusive black unicorn that roams the estate.

The wildly absurd narrative takes inspiration from Lewis Carrol’s Alice In Wonderland to be sure, but it’s largely inspired by the director’s own dreams and as such Malle has described it as his most intimate film. While it can be difficult to connect to it on a personal level like Malle does, none of his other films are quite as delightfully offbeat and eerily beautiful as this one.

3 Women is yet another film inspired by a director’s dreams, and it shows; to watch the film is to drift through an increasingly eerie dreamscape, always slightly off-kilter and unreal even in the more realistic early scenes. Haunting performances from Sissy Spacek and Shelley Duvall take it even further into uncanny territory; Spacek plays Pinky, a timid and naïve woman who moves into a small California desert town and befriends Millie (Duvall), a far more outgoing and assertive co-worker.

Pinky grows increasingly attached to and dependent on Millie after they move into an apartment together, and the two gradually begin to experience slow but drastic personality changes.

Although it’s clearly indebted to other surreal identity crisis films like Persona and Performance, 3 Women is without a doubt its own strange beast: built upon improvisation and featuring a third act that can only be described as unnerving, the film eludes interpretation and is all Altman’s own.

It’s the rare film that worms its way into your subconscious without you realizing it and lingers there long after it’s over: complex, impenetrable, and ultimately unforgettable.