The German filmmaker, an expert documentarian, is able to treat extreme subjects with extreme formal rigor, and knows that most of the time, the deep dark truth is impossible to see from the surface, and the façade of the everyday is arid, cold, and stiff, but the signs of the horror are still visible in minor details.

The film is extenuating, divided into 59 chapters, showing the life of the family in incredibly aseptic style. The explosions of violence are extremely rare, sometimes only implied by other elements, like bruises or a tremble in the voice.

The film was described as very difficult to sit through, mainly because of its length and chosen style of filming. Life goes on in the film, apparently unfazed; lunch, Sundays, dinners, sleep, fade-outs that take forever and give the film an impressionistic feel, blur the timeline, and distort perception.

Groning comes face to face with a monster with a mundane face, a dark well, that was initially hidden. He envisions the everyday not only in the dimension of time, but also as “effort”, and as the more the film goes on in its apparent equilibrium, the more the suffering of the mother takes her close to her breaking point.

Life is both acrobatic, a constant challenge of balance above an abyss, and sisyphic in its endless, fruitless, demanding nature that frustrates human beings until they are barely able to suffer anymore. 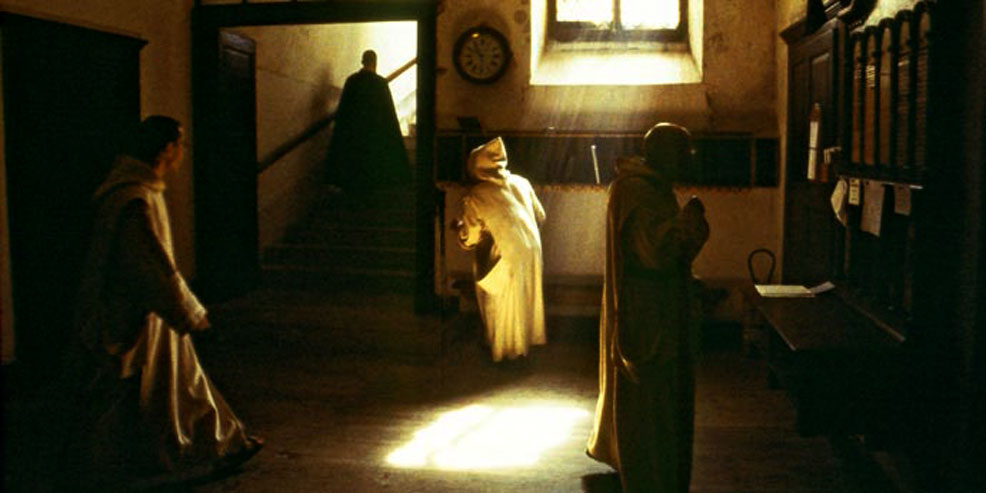 Sometimes you don’t need many words, you just need a camera and a subject, as is this case with the life of monks in a French monastery, and the astonishing and mysterious splendor of the world.

Capturing the everyday on camera is all about pace, about the use of long takes to blur the boundaries between fiction and reality, about tactile cinematography that brings the spectator’s senses into the film. Groning focuses on religion, the way in which deeply religious individuals observe the world, both as a simulacrum for the future paradise, and as a testimony of the power of God.

To understand the core of the film, we have to listen to what Groning said about the film, as he said that it’s comparable to a meditation. Every meditative state has to do with silence, radical Buddhism and Christianity alike.

The audience is invited to reach a meditative state where the film can be watched and listened to in a way that is profoundly elevating; every corner of the frame has to be observed, cherished, and evaluated, everything natural and artificial that is kissed by the camera is part of the experience, part of the art, the impressive and the unimpressive, the immediately notable and the subtle.

“Into Great Silence” is a deep dive into the state of mind that cinema creates, starting from the most basic elements of reality. 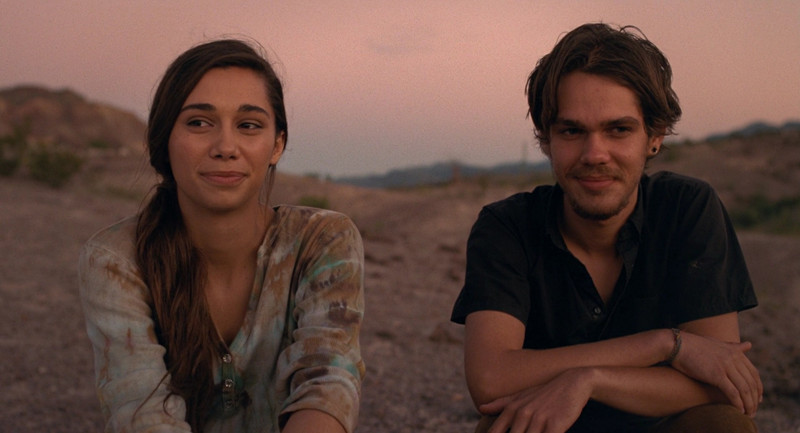 Maybe the mainstream crowds weren’t ready for Richard Linklater’s masterpiece. The exposure of “Boyhood” to a larger crowd brought on a large amount of criticism, accusations of navel gazing, of nothing happening. In truth, “Boyhood” is an extremely rarefied film; the narrative is almost non-existent, the conversations very mundane although profound through Linklater’s ear for dialogue and gentle existential sensibility, there are no major twists, nothing in the way of melodrama, nothing over the top. But guess what – that’s life.

Despite the fact that the shooting of the film was actually very rigorous, Linklater still managed to retain his almost improvisational style with dialogue and situations (the dialogue in Linklater’s films is rarely improvised and carefully rehearsed).

The stark realism of “Boyhood” quickly lets us know that it is a film about life and about time; not just about the character’s life, but the life of everyone.

It is a very democratic film, avoids intellectualism, and has affection for the pop culture of the new millennium. “Boyhood” is about those meaningless but ultimately unavoidable milestones that our life is full of, the first love, the first day of school, the first day of college, leaving home.

The way the song “Hero” by Family of the Year, which plays when Mason finally leaves for college, resonates deeply with everyone, as it is a universal tribute to the end of youth and the passing into adulthood. The last scene is the ultimate reflection about the moment, the notion of carpe diem, as Mason is sitting on a rock, enjoying the soft breeze and life, an ordinarily special life.

Robert Bresson was a master of essential cinema, of simple tales about simple people, and “Diary of a Country Priest” is one of his most celebrated works.

By depicting a priest’s experience in a village in Northern France, and the small tribulations of the soul that believes that God is with him, but is challenged with the harsh realities of life, Bresson shows the struggle that every human has to endure in trying to go down a path of light.

The fact that the priest writes in a journal adds to the sensation of watching a life unfold on screen without barriers, and the result, according to the most enthusiastic film critics, is the achievement of pure emotion.

As the priest observes life around him, he is torn between faith and despair, as expressed in key lines like “All is grace” and “God’s not a torturer” when he is trying to believe in a world that is fundamentally built and created by love, despite appearances. The hands, the faces, and the gestures add to a delicate and detailed anthropological portrait. 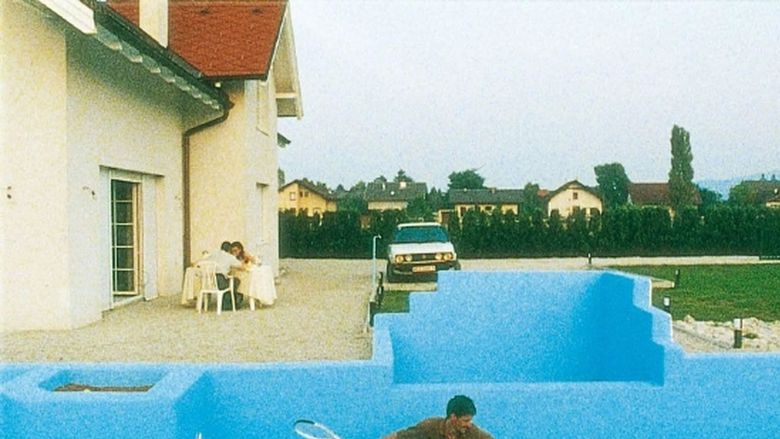 Sometimes, the truth hurts. Ulrich Seidl’s film takes place during the hottest summer weekend in Vienna, and is about six interwoven stories with a very simple setup and mundane events.

The film is poetic in a way, but it’s a drunken, nihilistic, and sick poem about the disgusting nature of the human being and the swamp-like staleness of existence.

Watching the film is like staring into the soulless void, and it’s disturbing; the shots of overweight people lying outside their houses in the blazing sun, like carcasses in the desert, and other brutally honest imageries are incredibly raw.

Seidl’s obsession with body parts, food, and sex is meant to uncover what he believes is the essence of the everyday, the stinking mixture of fluids, the perversions of the psyche, the interiors of the buildings avoiding every modernist feel and becoming naked walls of blankness and horror.

To Seidl, there is no tale to be told, no joy to be found in simplicity. He is comparable to radical writers like Emile Cioran and Bernhard, demolishers of pleasure and hope. No one has ever filmed the suburbs with such anger, with a hardcore punk sensibility trapped in the body of a radical pessimist.

This is life, and it hurts; this is the truth, it’s all rotting, it’s all dying, the veil is lifted. The film has a strange home video sensibility that makes it look like a cross between an amateurish recording of random moments and pornography. 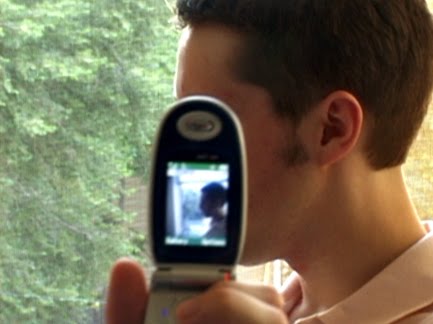 The mumblecore genre is based on free-flowing improvisational sequences with middle-class characters dealing with mundane problems. Joe Swanberg, one of the masters of the genre, shot “LOL” focusing on the coexistence of two elements in our everyday life: love and technology.

The result is not overly moralistic or patronizing, but it translates into a series of relaxed vignettes where the characters live through naturalistic performances from the actors. It was also one of the first films for actress Greta Gerwig.

The whole point of the mumblecore genre is being low budget, contemplative, and natural in the narrative development, so the emotion has to come from the way the film can draw the spectator into the closely observed lives of the characters.

Mumblecore sacrifices many things on the altar of simplicity; it enjoys the company of the characters, their expressions, their skins, and the spaces they inhabit, in the hope of finding true affection in the most basic elements of their lives. Where Seidl sees a rotting corpse, Swanberg finds a tender heart. 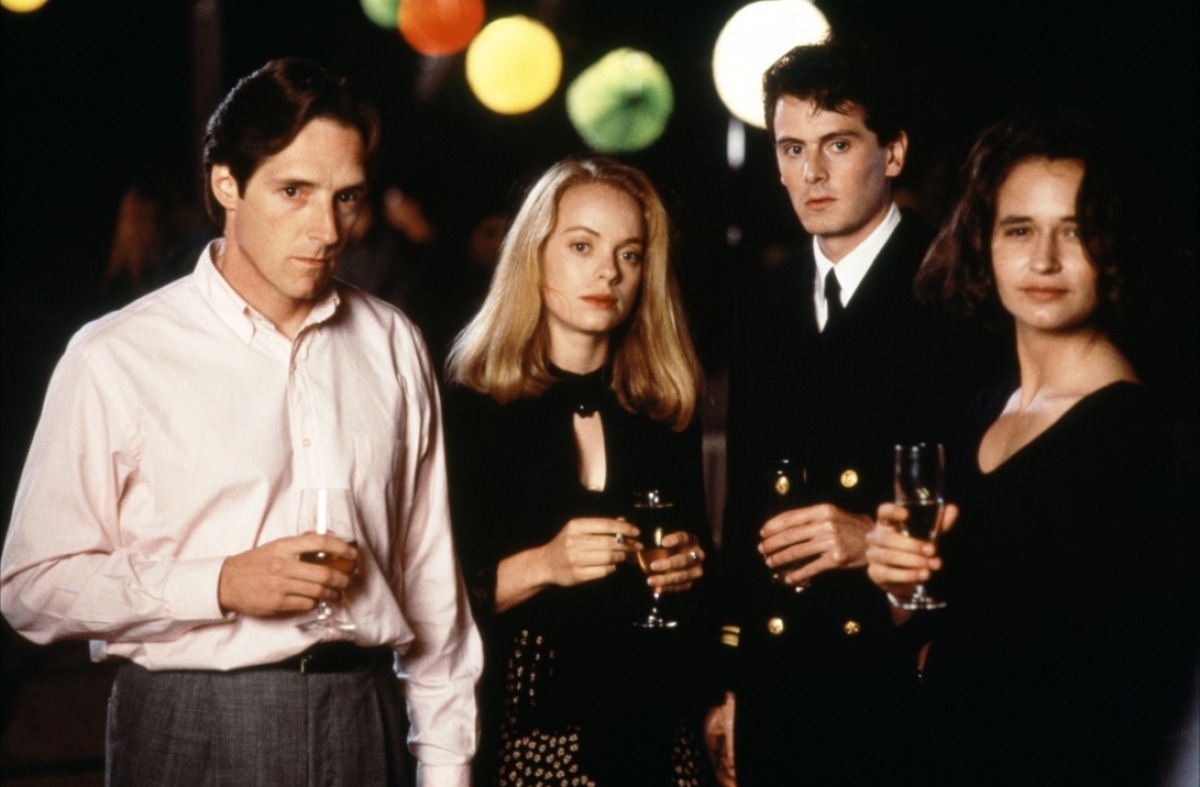 Whit Stillman genuinely loves his characters, so he can appreciate their experiences, enjoy their company, and shine a light on their everyday challenges, ramblings, heartbreaks, conversations, aspirations, disappointments, feelings of being lost, and being unfinished and doubtful about life.

The film itself is a depiction of their aimlessness, their nights out, and their conversations, and everything moves with the pace of a Jane Austen novel.

Just like the audience figures out the film, the characters, as we all do, figure out their life, day by day, mundane event after mundane event, meaningless conversation after meaningless joke. The truth in those moments is that the only truth is the moment. 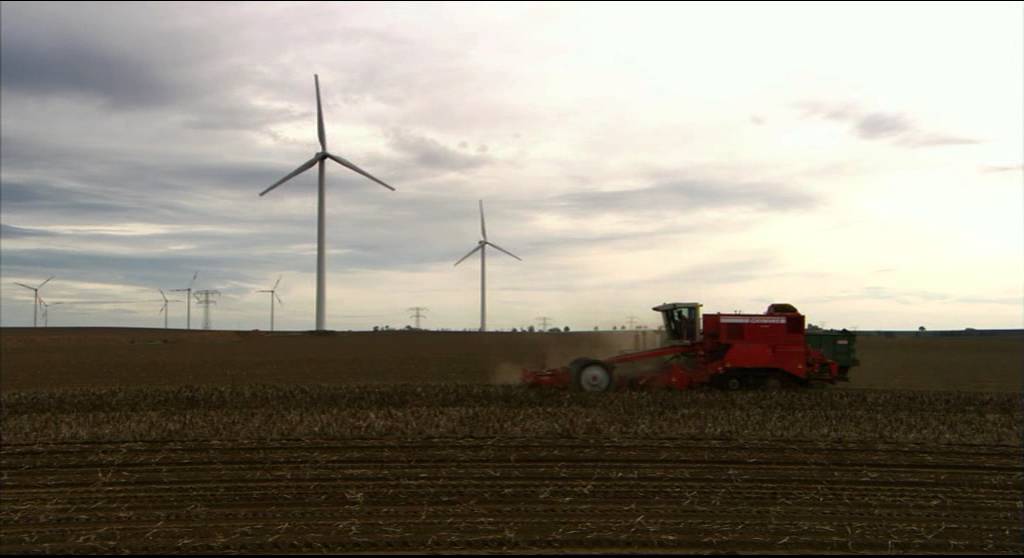 There is more weirdness in our daily life that we can ever imagine. When we think about the concept of eating, nothing that we put in our stomach can prepare us for the dystopian feeling of the large-scale production of food.

Nikolaus Geyrhalter’s documentary explores the sinister process of food production with a postmodern eye that reminds us of the novels of Don DeLillo or Thomas Pynchon. He plants his camera and lets the passive repetition of the process penetrate the mind of the audience, the idea that this is happening every day, an almost automatic machine of production, senseless and perfectly immersed in a familiar context.