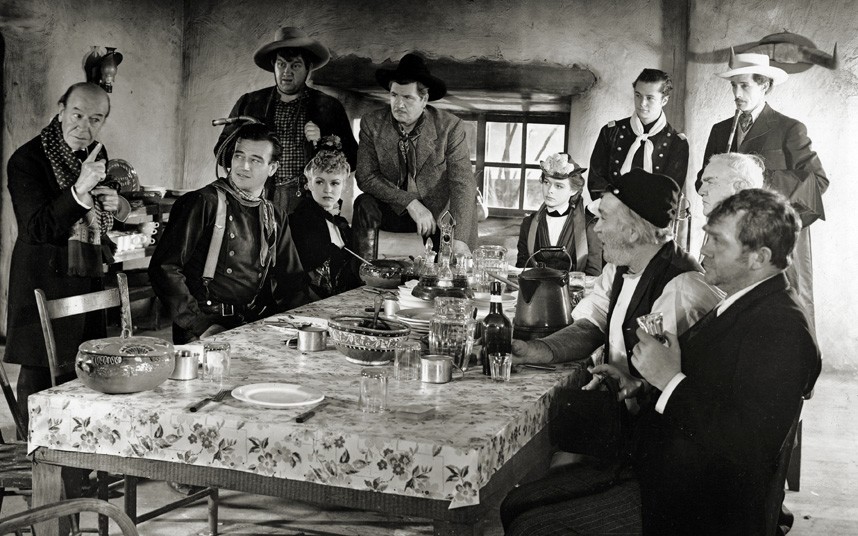 How big of a deal was Stagecoach? Well, reputedly Orson Welles considered it to be such a model of filmmaking brilliance that he watched it more than 40 times during the making of Citizen Kane. Stagecoach may or may not have been the director’s first great film but it feels like the moment where all of the elements of the John Ford universe fully clicked into place, resulting in a picture that is widely recognized to this day as holding the unofficial title of ‘First Modern Western’.

Tight in its construction but expansive in its themes, Stagecoach uses its eponymous vehicle as an instrument for social commentary, seeing various facets of society cooped up in a single space, at the mercy of surrounding dangers and dwarfed by the towering structures of Monument Valley (the first of many Ford westerns to use this tremendous location).

The danger waiting for them – a group of murderous Apaches – is established from the very first scene but the tribe’s lack of screen time turns them into a more abstract threat that hangs over the lives of the central cast, creating a constant sense of dread and adding thunderous resonance to every moment of doubt, humor and affection.

The primary mode here is philosophical. As the notorious drunk Doc Boone puts it, “Somewhere, sometime, there may be the right bullet or the wrong bottle waiting for Josiah Boone. Why worry when or where?” Such fatalist speculations add to the fury of the inevitable clash with the Apaches and to the somber gravity of the film’s final showdown. This isn’t just America. This is life. We’re all in it together and it’s frightening and demanding enough without us getting bogged down in petty social divisions.

With its grand insights, rapturous set pieces and tonal acuteness, Stagecoach rescued the western from B-movie irrelevance and changed American cinema for the better. All that and the film also practically invented John Wayne.

Blending the personal, the political and the spiritual in a grand illustration of the rootless existence of the Dust Bowl refugees, John Ford’s best non-western may have been based on one of the most revered American novels of the 20th century but the film’s vision belongs to its director and maybe a few of his talented collaborators.

Granted, John Steinbeck’s writing provides Ford with a sturdier backbone than the more typically ‘Hollywood’ screenplays that the filmmaker would often be stuck with (even if Nunnally Johnson’s script downplays some of the more provocative elements of the source material). But the hauntingly expressionistic imagery composed by Ford and cinematographer Gregg Toland create a potent narrative of death, dignity, persistence and interconnectivity that’s similar but separate to Steinbeck’s.

Ford is famously quoted as saying that the main trick to directing is to ‘photograph the people’s eyes’ and the likes of Henry Fonda and Jane Darwell reward this notion with some heartrending performances. Nonetheless, the beauty and evil of the human soul are expressed just as vividly in the film’s ghostly and challenging landscapes.

While Ford’s artistic sensibilities would become more refined and distinct over the years, The Grapes of Wrath remains one of his best works thanks to the passion that courses through its every scene. The picture was evidently Oscar-friendly in its sentimentality but it was far from phony.

Its anger towards the apathetic, corrupt and greedy authorities is as genuine as its reverence towards the persistent Okies struggling for a next meal and the few good Samaritans they meet along the way. If only every award-hungry ‘message movie’ about some ‘triumph of the human spirit’ followed through on its pretenses with such grace, skill and sincerity. 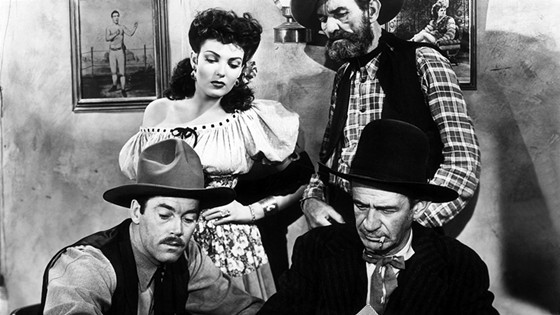 Ford’s adaptation of the famous OK Corral gunfight stands as a testament to the maturity which the director had developed in his craft by the second half of the 1940s. My Darling Clementine just might be the best western of that whole decade and its genius lies in its details. It’s in the rude, anti-social manner of Wyatt Earp upon arrival in the unruly town of Tombstone and in the surprise of his two brothers at seeing Wyatt dancing at a church gathering.

It was around this time that Ford learned to give rich symbolic potency to his characters not just through their occupations (as in Stagecoach) or their circumstances (as in How Green Was My Valley) but through the nuances of their behavior and their changing worldviews.

The church itself – along with the arrival of a dedicated marshal in Wyatt Earp and the suggestion of a school being established – is presented as one of Tombstone’s small steps to being a safer, more structured community but the true disorder to be overcome in My Darling Clementine is found in the mind. The legendary Doc Holliday particularly embodies this inner struggle, always visibly at war with his own bitterness, self-loathing, shame and regret.

That Wyatt seems to have some personal hang-ups of his own gives inspired to confusion to an already engrossingly complex central relationship. The first scene between a white-hatted Wyatt and a black-hatted doc is an intricately tense exchange of sympathy, camaraderie and antagonism as the two cautiously test each other’s waters.

It was also around this time that Ford started to find value in the unspoken, tapping into the essence of those quiet and despondent moments where no words feel quite sufficient. Characters constantly look like they’re feeling a whole lot less than they’re saying or doing, aided by some of the best cinematography of any of Ford’s works. But despite (or because of) this restraint, the death, chaos and cruelty of the environment – and the lyrical beauty and romance found regardless – have rarely felt so vivid and consequential.

Ignoring that this is the film where John Wayne says ‘pilgrim’ a bunch of times, the most frequently quoted line in The Man Who Liberty Valance is one that is generally employed as a reverent justification and summation of John Ford’s career: “This is the West, sir. When the legend becomes fact, print the legend.” With its liberal employment of many of the old genre quirks, the film itself is more legend than fact but it uses its artificiality to deconstructive ends, mixing our romanticized perceptions of the past with a more sober outlook.

Thematically, the film could be considered a more elegiac relative to The Searchers, filled with deadening silence and somber shadows where the 1956 film would find furious action and expansive landscapes. John Wayne again plays a rowdy gunslinger whose violent means of problem solving make him the product of an era now moving into its twilight years.

Wayne’s Tom Doniphon may be the only man capable of making ruthless outlaw Liberty Valance tense up but his traditional masculinity finds opposition in the humility of James Stewart’s Ransom “Ranse” Stoddard, a man who refuses to even carry a gun. To the small anarchic town of Shinbone, Ranse brings education, literacy, democracy and a free press, all of which turn out to be more effective tools of defense and progress in the new society than any gun.

Ford was purportedly forced by the studio to cast Wayne in the film but, whether intentional or not, as the final full western the two would make together, Doniphon’s story serves as a fittingly melancholic conclusion to a long-running relationship between Ford, Wayne and the old west that began twenty-three years back with Stagecoach.

Speaking of which, The Man Who Liberty Valance shares too many parallels with that game-changing 1939 film to be considered purely incidental, including the return of John Carradine and Andy Devine, Ford’s first use of black and white in years and, most tellingly, the cobweb-covered stagecoach now lying in a gloomy old shed.

Ford is going back to the roots of the mythology he helped create and finding himself mournfully disillusioned. From its pensive opening minutes to its sad whimper of a final shootout, the last pre-Leone masterpiece of the western genre is an anti-climax of the most achingly beautiful kind. 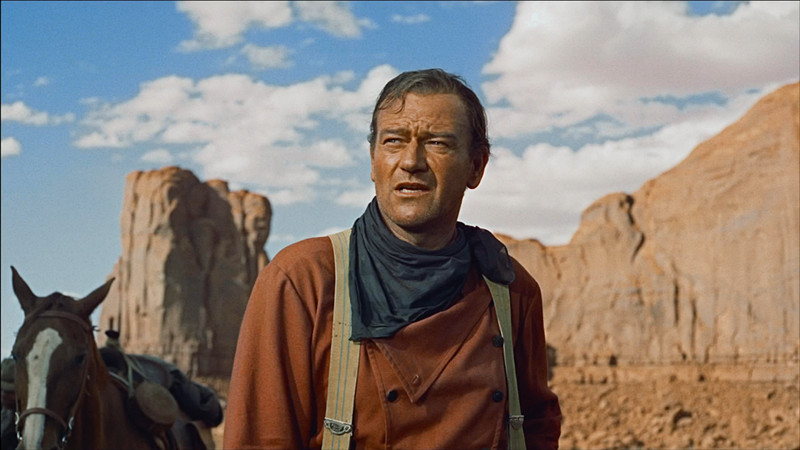 The John Ford film most frequently hailed as the director’s magnum opus, The Searchers could easily be viewed as a creative culmination point for his career, taking the lessons learned from his looser, more structurally playful and psychologically astute pictures of the late ‘40s and early ‘50s and imbuing these discoveries with greater narrative tension and operatic emotions.

By turns thrilling, comical, romantic and downright sinister, the film is a cacophonous mix of the many faces of civilization and human nature. The eponymous search is as much for the true spirit of America as it is a quest to find the young Debbie and reap vicious, racially charged vengeance upon her Comanche captors.

Much of what makes The Searchers great can and has been said of many of this list’s other entries (the vast and expressive landscapes, the thoughtful details that reveal hidden nuances in characters…) but what brings this film to the top of the pile is the raging center of its drama that is John Wayne’s Ethan Edwards, a man still fighting the Civil War in his own mind years after Confederate surrender.

A natural loner most at ease within the barren wilderness, Ethan is an intensely single-minded gunman with a disturbingly encyclopedic knowledge of Native American customs and behavior but his violent, rugged individualism and wandering spirit place him outside of the norms of the new society – or perhaps any form of society. His unsettled and bitter soul keeps him stuck in the past, unchanging, and yet always on the move.

By this point, John Wayne had developed the depth and the subtlety to back up his charisma as a screen star, allowing for a performance that’s perfectly in sync with Ford’s larger vision. The distress in Wayne’s eyes upon Ethan’s realization that it’s too late to save his family from attackers hauntingly sets up a presence of death that expands in the horrifying scenes that follow.

It’s a presence that lingers for the rest of the picture, found in the brutality of the land and in the self-destructive, restless drive of the film’s protagonist. There’s joy and beauty to be found in The Searchers but it’s Ethan’s inability to see anything beyond the grimness of the world that makes him one of cinema’s great anti-heroes, inspiring great filmmakers ever since to probe the uglier and more lonely facets of modern America.

Author Bio: David Pountain is a writer, editor and obsessive culture junkie who currently runs the blog section of FilmDoo.com, a UK-based streaming platform which specializes in international and independent cinema.