Half the mentions that How Green Was My Valley gets these days are in relation to Citizen Kane – specifically how this turn-of-the-century drama set in a Welsh mining village beat the (at least until recently) official best film ever for the Best Picture Oscar. And sure, it’s not as good as Citizen Kane – which is about as light a putdown as you can lay on any film – but this cinematic hymn still just about trumps any recipient of the award in recent years.

Coming one year after The Grapes of Wrath, How Green Was My Valley serves as another heartfelt tribute to the working class and their perseverance. But this time around, Ford taps more profoundly into the power of memory, creating a blue collar picture that radiates with heavenly wistfulness.

It’s not that the picture is entirely stuck in the past. The film serves as one of Ford’s stronger representations of the conflict between tradition and progress. Philip Dunne’s script is critical of those who decry unions as ‘socialism’ and wary of any stubborn rejection of the changing times.

If there is one group that the film ridicules unsparingly (other than snooty, sadistic teachers), it is the stuffy, vindictive religious zealots, with the film opting instead for a more balanced perspective of the respective roles of spiritual reliance and practical action. Nonetheless, from its angelic summer light to its beautiful winter snowscapes, How Green Was My Valley stands primarily in reverence to a bygone era for the salt of the earth, celebrating – rather than mourning – all that is lost to time. 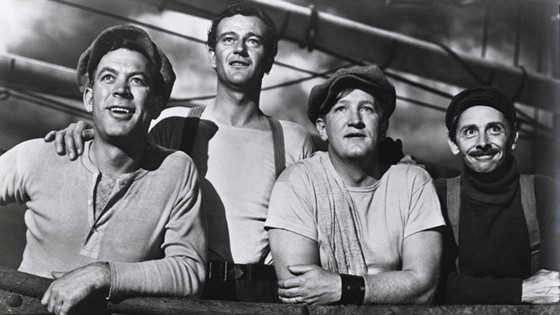 Section by section, The Long Voyage Home is a more narratively focused film than later Ford works like The Quiet Man and She Wore a Yellow Ribbon. Nonetheless, as an adaptation of four different Eugene O’Neill plays, this dark seafaring drama manages to go to a lot of different places in its running time, amounting to a both vivid depiction of life on a British steamer and a sorrowful representation of life on the periphery of an ever encroaching and inescapable war.

The film spends much of its run within the gloomy confines of the SS Glencairn. Whereas Ford would often film the natural landscapes of America as an endless expanse, here he all but ignores the limitless ocean itself to focus on the claustrophobic mass of rope and steel that the men find themselves limited to. The raging emotions facilitated by the setting evoke a national anxiety and paranoia as anyone remotely suspicious is treated as a spy for the enemy.

Working with legendary cinematographer Gregg Toland (experimenting with deep focus one year before his work on Citizen Kane), Ford wrings this setting’s visual potential for all its worth, overcoming any threats of staginess through expressive light and shadows, ominous skies and thrillingly edited set pieces.

The Glencairn is a lonely boat for any man to die in but the film’s tragic final stretch suggests that the land is hardly more welcoming. When The Long Voyage Home reaches the end of its journey, not even John Wayne’s questionable Swedish accent can ruin the impact of its startlingly sad conclusion. 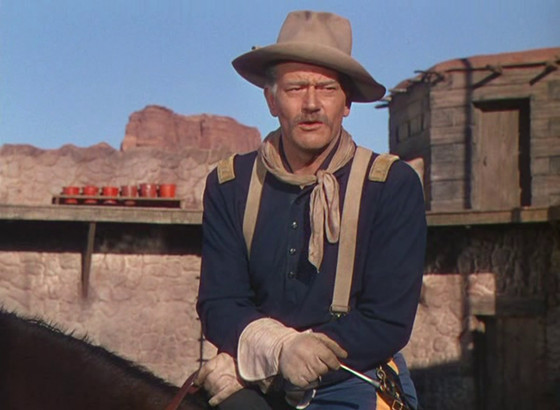 Up to around the mid-’40s, Ford was in a comfortable groove of making artistically rich, personal works that still managed to appeal to narrow-minded Academy Award sensibilities (hence How Green Was My Valley beating Citizen Kane for Best Picture, with the latter film being regarded as highly esoteric in its time).

If there were ever a point where Ford’s art started to diverge from Hollywood interests, it may well have been with his so-called ‘Cavalry Trilogy’ that started with 1948’s Fort Apache and concluded with 1950’s Rio Grande. That’s not to say that these three films are a challenge to like. The middle piece, She Wore a Yellow Ribbon, proves particularly inviting with its distinct and lively visual palette. Between the film’s prevalent yellows and blues and the intense reds of the twilight hours, Ford was rarely this exact in his coloring.

But the free form plotting nonetheless poses a challenge to the conventions catered to in Ford’s earlier, more narratively focused westerns. She Wore a Yellow Ribbon is not a linear journey but a crowded panoramic view of a period and place, and a week in the ongoing existence of one cavalry post. Every moment feels vivid and full of life, imbued with a here-we-go-again sense of briskness.

Tying together the various episodes is John Wayne’s Captain Nathan Brittles, an experienced leader committed to his troops even in his final few days before retirement. Perhaps wary of his own encroaching status as an old timer, Ford enriches his scenes with a melancholic sense of history that melds thoughtfully with the film’s perpetual feeling of freshness.

Story-wise, She Wore a Yellow Ribbon feels like the snippet of a larger tale, as though the film could just as easily have started and ended at any two moments in its timeline – and that’s the point. Time keeps pressing on for the cavalry whether Brittles there or not. The best he can do is stick around and help them for as long as he can, honoring the past by remaining loyal to the present in order to keep the proverbial plates spinning into the future. 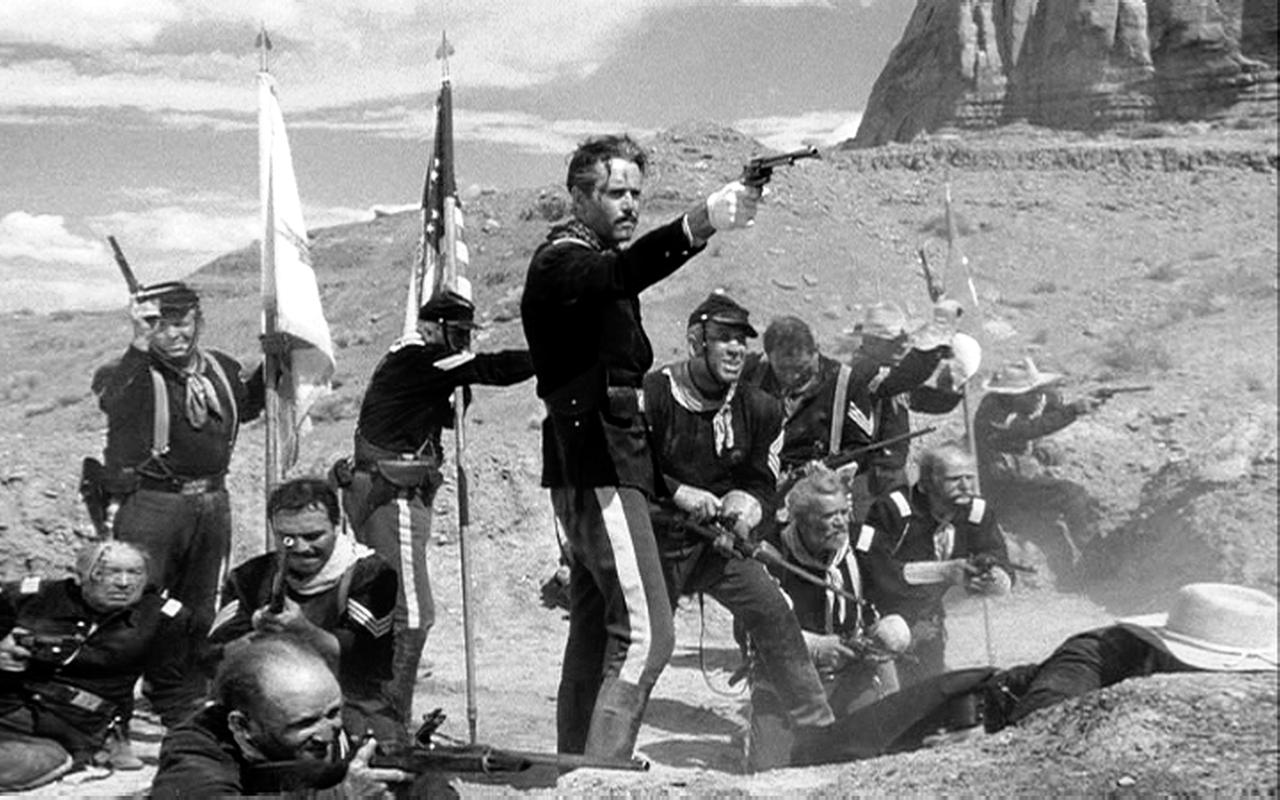 The earliest instalment in Ford’s cavalry trilogy marked the first (but not the last) time that Ford regulars John Wayne and Henry Fonda would share the screen. As if to highlight the contrasting personalities that the two stars bring to the table, the film’s central conflict comes from the two incompatible styles of leadership favored by their respective well-matched characters.

While Wayne’s Captain Kirby York commands his troops with an informal practical-mindedness, Fonda’s Lieutenant Colonel Thursday is staunchly authoritarian, impersonal and by-the-book. It’s the latter individual who has the final say on how to handle the Apaches of the area and, while the film presents him as a brave, well-intentioned man, his stubbornness and reluctance to compromise with either his fellow soldiers or his enemies proves to be his undoing.

Ford’s own mixed feelings about authority figures comes through hard in this melancholic work, showing a distrust towards out of touch leaders who refuse so much as a rational discussion with the very people whose lives they’re risking. The film’s promotion of a more cooperative, human approach to governing comes through in its unconstrained structure. From this point onwards, Ford’s films would flow a little more freely than before and it is the assortment of tangents and side-plots that gives Fort Apache much of its character.

Thursday’s stiff leadership is persistently defied as humor, love and general warmth are shown to gleefully undermine militaristic self-seriousness at every turn. Even the romantic subplot is one of the most affecting and tenderly executed of any Ford film, thanks in no small part to the charm of a nineteen-year-old Shirley Temple.

That the film takes the time to get to know these people and explore their world makes it all the sadder to see them led by a foolhardy leader into a pointless and unwinnable battle. But rather than wallowing in grief-stricken fatalism, Fort Apache remains lively, reverent and forgiving, amounting to a western inclusive enough to sympathize with the misguided Lieutenant Thursday and the mistreated Apache alike. 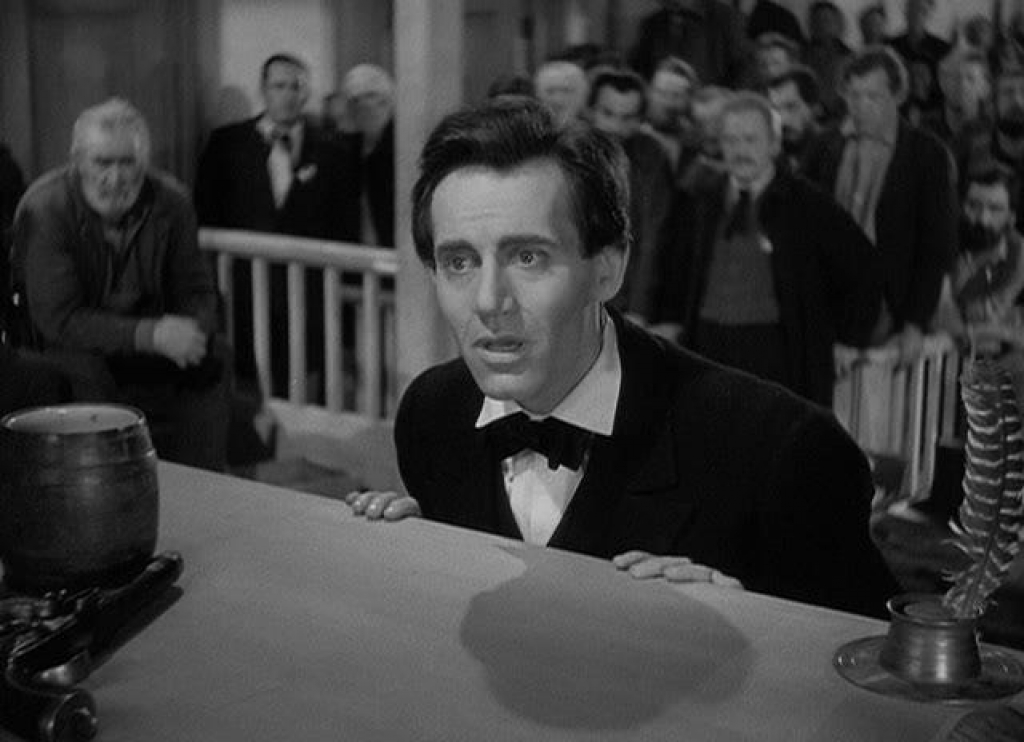 In the same year that Stagecoach gave John Wayne his breakthrough, Ford released his first collaboration with his other favorite leading man, Henry Fonda. Whereas Wayne was the rowdy, rebellious everyman, Fonda tended to embody a gentler side of the American identity, regularly applying nuanced performances to diligent workers who stood on firm principles in their struggles for order and justice (see Fort Apache for a more critical take on this type of character).

In Young Mr. Lincoln, the star provides both mythic gravity and humble humanity to the early lawyering days of the 16th president. The film is a work of hagiography through and through but the tender details in Fonda’s performance keep the characterizations sufficiently grounded, presenting a sincere and unpretentious soul who’s simply looking to do the right thing.

Paralleling the taming of the old west that Ford depicts elsewhere, Young Mr. Lincoln presents the due process of law as a necessary alternative to emotionally driven mob rule, with the latter manifested here as another one of Ford’s condemnations of small town moral hypocrisy. Given international tensions at the time, the picture held clear thematic relevance upon release but it’s the purity of the film’s reverence towards its central figure that truly preserves the film’s potency.

Untouched by revisionist cynicism, Ford weaves history with fiction to form a tribute to the goodness he saw in the hearts of men and in the bones of a nation. Perhaps this isn’t the real Lincoln or the real America but, since the patriotic fantasy is being guided by the talents of Ford and Fonda, the results are sublime.