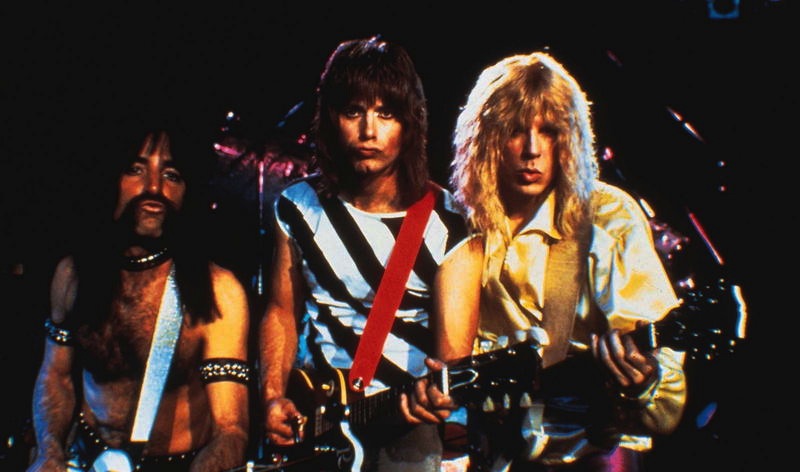 If I had a dollar for every local band version of “Living After Midnight” I’ve heard in my life… I’d have about $15.30. Ba-dum-pum (spelling?) Almost every teenager with a dream and a pick (or a drumstick) has wanted to be in a band. That is why movies depicting dreams not deferred, but realized, are so incredibly appealing.

So break out your denim vest, set a fan to blow through your hair in slow motion, and crank your amp up to 11. Here are 14 fictional movie bands you wish you could join. 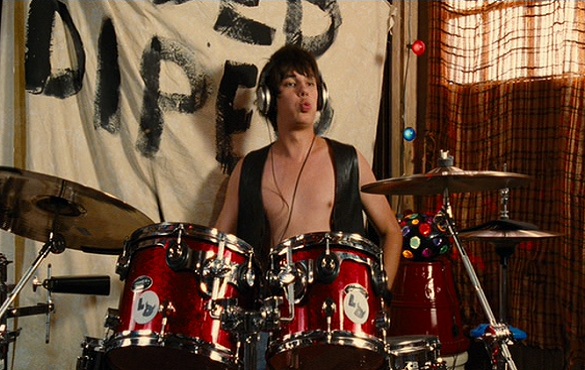 Synopsis: The second movie in the franchise, it continues the story of Greg Heffley’s trials and tribulations of middle school. In this one, mom decides that Greg and his brother Rodrick need to bond so she tries and fails. When Greg kinda covers for Rodrick’s “parents are away” party, they end up really bonding. Rodrick gives Greg his rules (hence the movie name) and they have fun pranking people together.

That soon falls apart when Rodrick realizes Greg did not cover him as much as he thought he did. Greg redeems himself by agreeing to be best friend Rowley’s magic assistant, donning tights and a cape in order to get his parents to allow Rodrick’s band to play in the talent show.

Wanna Join the Band? I know, I know. This band? This band would not be on many lists, but this movie is super fun and Rodrick is a big reason. His thick black eyeliner, his screamy outrage, and the utter belief that he has the greatest band that would be famous if he could just get the right exposure, embodies that feeling a teen has when he learns the 1st few notes of “Iron Man” on electric guitar. The talent show scene where the mom does a crazy Elaine dance and accidentally hypes up the crowd is fantastic. 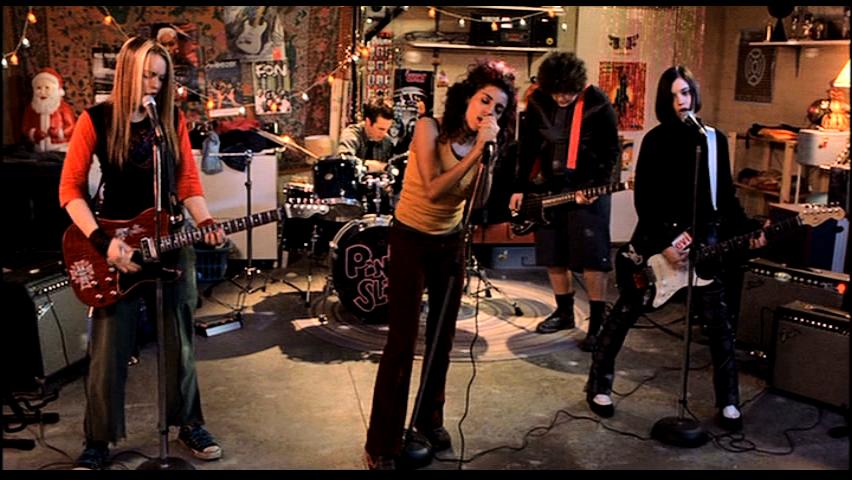 Song: “Take Me Away”

Synopsis: A teen and her mom just don’t understand each other and argue constantly-about her band, boys, and the new man in mom’s life. The owner of the Chinese restaurant they frequent puts a spell on them where they switch bodies. Lohan’s Anna has to go to work and be a psychologist while ducking the advances of her soon-to-be husband Mark Harmon.

Mom Tess in Anna’s body, tries to follow her own advice to her daughter and ends up failing miserably. Anna’s crush ends up liking Anna in Tess’s body (it’s way less confusing when you see it-I promise), showing that cute boys can like a girl for her personality more than her looks (although Jaime Lee Curtis does look great). Tess comes through for Anna by filling in during the Battle of the Bands and the moment they finally are selfless towards each other, they switch back.

Wanna Join the Band? These girls freakin rock! Ok-there’s 2 boys in the band too but you can’t even notice them. Their song “Take Me Away” has the angsty girl rock vibe that hooks women of all ages as it calls to the inner 16-year old. A second song at the end, “Ultimate You” where she’s ½ singing to her mom because they now totally understand each other and ½ singing to Chad Michael Murray (sigh-who wouldn’t), is fun and makes you wanna jump up and sing along.

12. Barry Jive and the Uptown Five 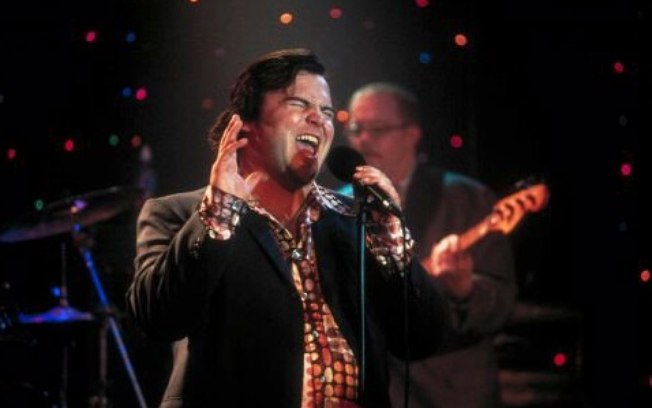 Synopsis: Record store owner Rob (John Cusack) goes through his past 5 relationships through the use of the 4th wall and Top 5 lists. He, along with Barry (Jack Black) and Dick, his workers and fellow listmakers, practice musical snobbery and social ineptness with equal fervor.

The loss of his latest girlfriend, Laura, is tearing him apart, resulting a fun imaginary sex scene with Ian/Ray (Tim Robbins). She keeps finding reasons to linger and eventually Rob realizes that his romantic snobbery has kept him from really committing to Laura, giving her no reason but to have left.

Wanna Join the Band? “C’mon man you had that flyer up for 17,000 years.” That’s what John Cusack tells Jack Black when a grungy guy comes into the invite Black to “jam”. “I can sing!” he proclaims when he is mocked by Rob and co-worker Dick after he botches a simple goodbye pound.

Later in the film we find out that Black was not lying about his singing credentials. He shocks the crowd at Rob’s album opening by tossing aside their Sonic Death Monkey name, and announcing themselves as Barry Jive and the Uptown Five and bringing the house down to Marvin Gaye’s “Let’s Get It On.” 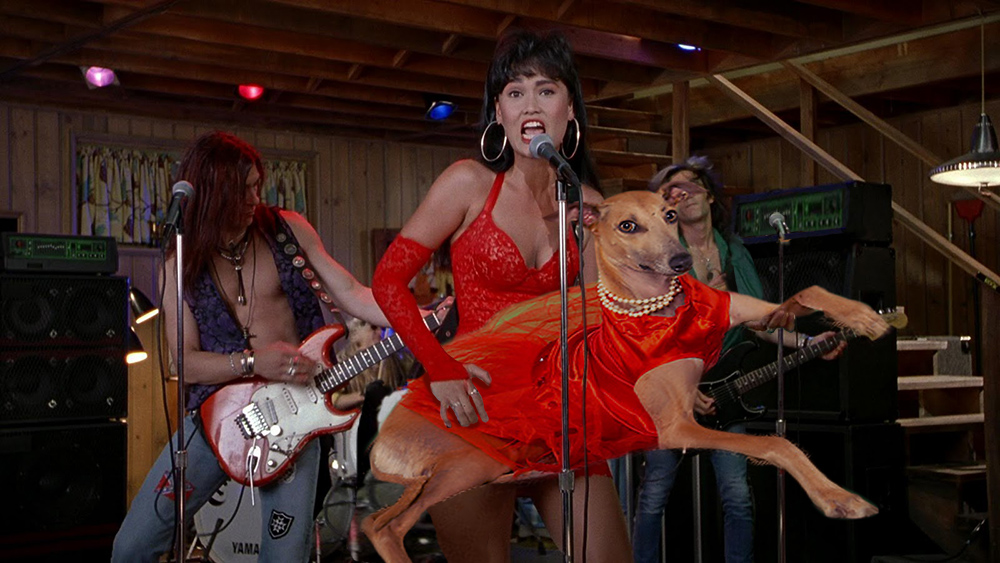 Synopsis: Based on Mike Myer’s SNL sketch, Wayne’s World is about two rock fans who run a public access channel show called Wayne’s World where they make fun of the local people they interview, play air guitar (and sometimes drums), and talk about beautiful women (schwing!). The show is “discovered” and moved to the big time.

As a result, Wayne meets and falls for Cassandra, lead singer and guitarist of Crucial Taunt who is also discovered. Wayne and Garth get screwed over and lose their show. In an effort to get it back, things go completely awry. Acknowledging the “bad ending” via 4th wall, Wayne and Garth give the audience a “Scooby Doo” ending and a “mega happy” ending.