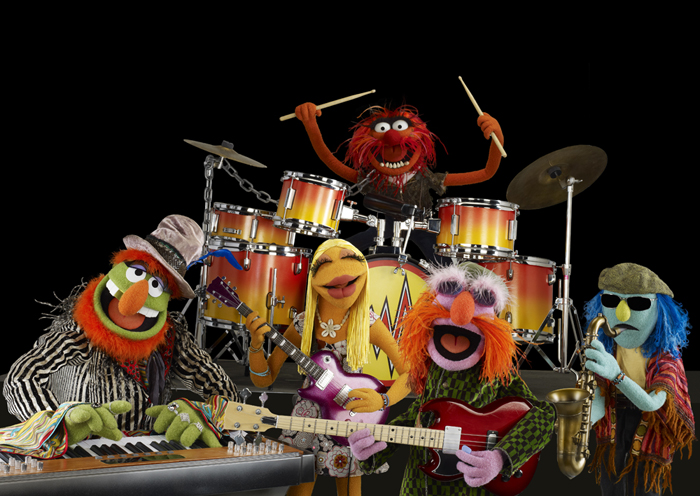 Song: “Can You Picture That”

Synopsis: Kermit the Frog decides to pursue a career in show business after a Dom Deluise playing agent hears him singing “Rainbow Connection” in his swamp, and convinces him he can make millions of people happy.

Unfortunately for Kermit, Doc Hopper (gleefully played by Charles Durning), the owner of a fried frog legs franchise, wants the talented Kermit to be the face of his business, and will stop at nothing to get him. Traveling across country he runs into Fozzie the comedian, his one true love, Miss Piggy, Gonzo & his chicken groupies, and of course, Dr. Teeth and the Electric Mayhem, whose Animal drummer is the star and eventually saves the day.

The band performed on the Muppet Show and in many other Muppet Movies, but when Kermit meets them on the road, he tells them of his troubles. Floyd says, “If this were a movie (Scooter-”which it is”)… we would think of a clever plot device.” The band disguises their car and performs, “Can You Picture That”, a bluesy rap song with a catchy chorus. You can’t beat the longevity either. 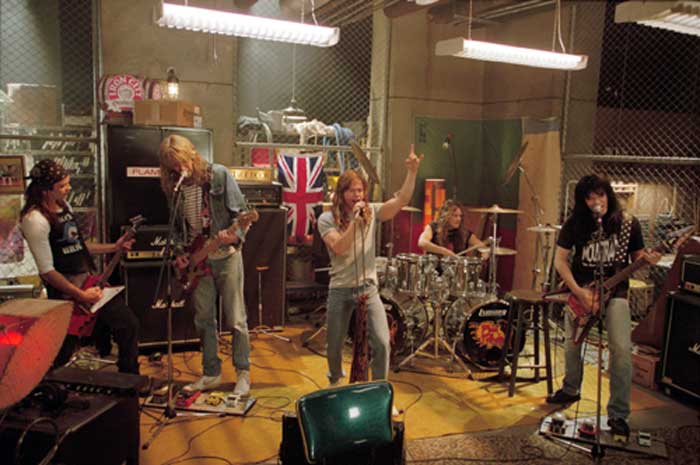 Song: “We All Die Young”

Wanna Join the Band? “We All Die Young” the Steel Dragon hit and actually a song by the non-fictional band Steelheart, has all the elements of a hair band song. It starts off slow and ballad-y, brings in some harmonizing vocals leading to a crescendo, and then the guitar riff blasts in. The vocals have the required lengthy wail.

3. The School of Rock 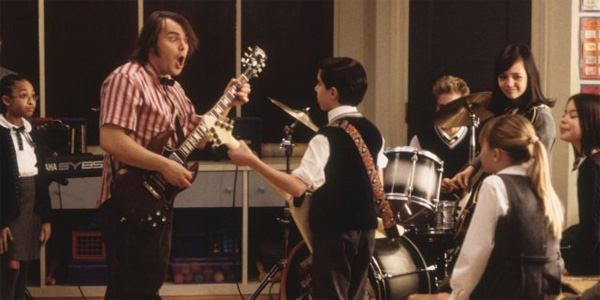 Song: ”The School of Rock”

Synopsis: A washed up musician gets kicked out of his band right before a Battle of the Bands. Unemployed, broke, and desperate, he steals his roommate’s identity and becomes a substitute teacher in a prestigious school run by principal Joan Cusack. As Alice Cooper would say, “No more pencils, no more books…”

After accidently hearing the kids performing classical music in school, Dewey gets a million dollar idea.  “Turn it sideways, CE-LLO it’s a bass!”  Dewey throws all curriculum out the window and teaches the kids Rock and Roll 101, bringing out the inherent talents and confidence of the students. They form the School of Rock and enter The Battle of the Bands contest.

Wanna Join the Band? Making a 2nd appearance on the list, Jack Black’s love of rock and all things AC/DC bursts out of him throughout this whole movie. He, his Angus Young shorts, and surprisingly nice calves strut around that stage and own it.

The kids were actually real musicians and the song “School of Rock” was catchy enough to be a real hit. Look-the band was good enough to make the parents and principal forget all that time of no reading/writing/arithmetic, joking hint of pedophilia, and the pesky identity theft. And hey….”it’s a long way to the top if you wanna rock n roll”. 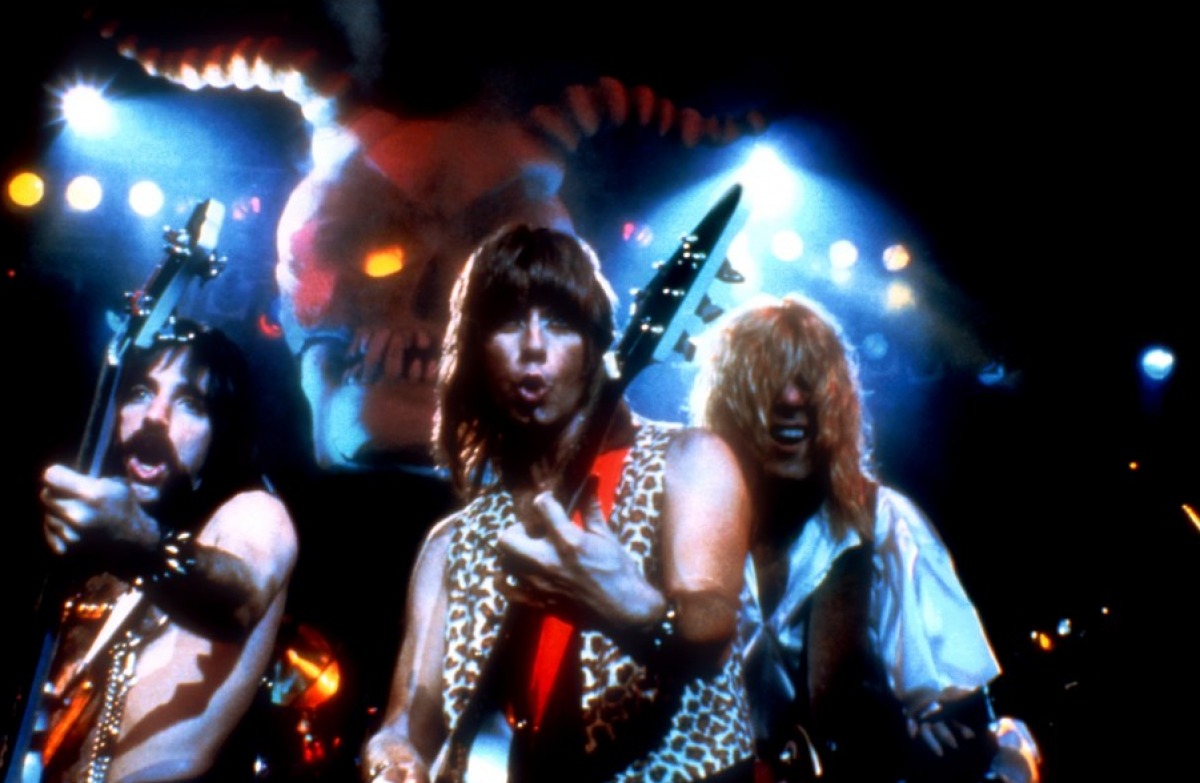 Synopsis: Spinal Tap was one of those fictional bands that ended up touring as a real band. A ”rockumentary” by Marty DeBergi (Rob Reiner), it followed the band as they went on tour, showing fake footage of the past and one on one interviews with the members, David St. Tubbins, Nigel Tufnel, and Derek Smalls. They go through many drummers who seem to die quite uniquely.

The band becomes less and less successful as the tour goes on, even with an 18” Stonehenge, and the venues become smaller and smaller. Nigel quits the band and the others realize they can’t really do it without him. They find out they are big in Japan, reunite and are successful once more (in Japan at least).

Wanna Join the Band? Ok. So this was a gimme. And probably should have been #1 for some people. But #2 ain’t too shabby and this iconic movie and band has been a staple of the rock community since we 1st heard the opening guitar riff of “Tonight I’m Gonna Rock You Tonight”.

Watching this, you almost knew what it was like to be in a band on the decline at the time, despite the parody. The infamous lost before the show scene was one many bands at the time related to. This band was hilarious. “It’s such a fine line between stupid and uh…clever.” 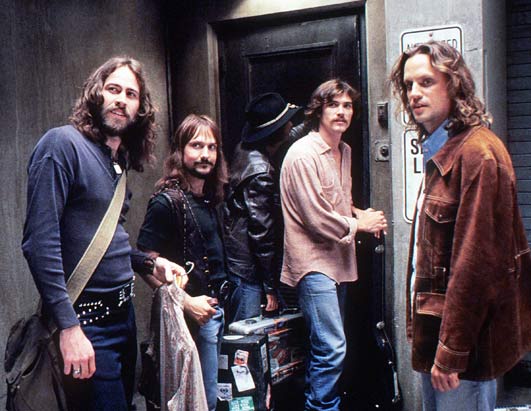 Synopsis: A young “Cameron Crowe” type gets tapped by Lester Bangs (Ahhh… PSH-we miss you already) and then Rolling Stone magazine to write a piece about Stillwater (not to be confused with the actual band, Stillwater-filmmakers got permission from the band to use the name). Against the advice from Lester, he gets dragged into their world, falls in love with a groupie, and finally figures out, “There’s no place like home”.

Wanna Join the Band? Who wouldn’t? Cameron Crowe’s 2nd appearance on this list, this semi-autobiographical tale has all the glory and dirt one imagines rock tours in the 70s or any decade to be. The song “Fever Dog”, written by Cameron Crowe, Peter Frampton, and Nancy Wilson, with guitar tracks laid down by Pearl Jam’s Mike McCready, has Jason Lee crooning (not really) and gyrating (really) like Robert Plant.

You feel like swaying alongside Penny Lane. Billy Crudup’s Russell Hammond is a “golden god” and when you see him and Lee onstage, their characters display that onstage connection of a singer and his lead guitarist, despite the “who is the star of the band” competitiveness that is offstage. The tour is full of everything that is the road-the “highs” and the sadness, loneliness, and exhaustion it also can bring, which can only be fixed by a bus filled to bursting, belting out “Tiny Dancer”.