Before I write anything about Letterboxd.com,I should claim that they did not pay me to do this, I volunteer as a big fan of the site.I have been waiting for shouting out loud for them since the first time I used it,but since they have been in beta stage in the past few months,it was against their policy to publish any screenshots of the site in public.I’m glad they finally open to the public yesterday,so here comes my chance to introduce this awesome site to all of my readers on this blog.

So what is this site I’m so excited to review?Letterboxd is a site named after letterbox for their love of the widescreen format. It is mainly for film buffs to record films and express ideas about films they watched.OK,you know what the site is about,so what exact features make it better than other existing platforms like IMDB,Get Glue,or I Check Movies etc.?Here are my 7 reasons.

1.It is damn coooool.

I’m talking about the design of the site,design is the first thing you notice when you open the website.The first time I logged in,it definitely grabbed my eyeballs and made me want to stay as long as possible.The dark color scheme works perfect for me,the navigation bar is crystal clear for me to do anything I want.If you have used other platforms,try to compare their designs with this one,it will blow you away.Here are some screencaps of the beautiful interface,I will let the pictures speak for itself. 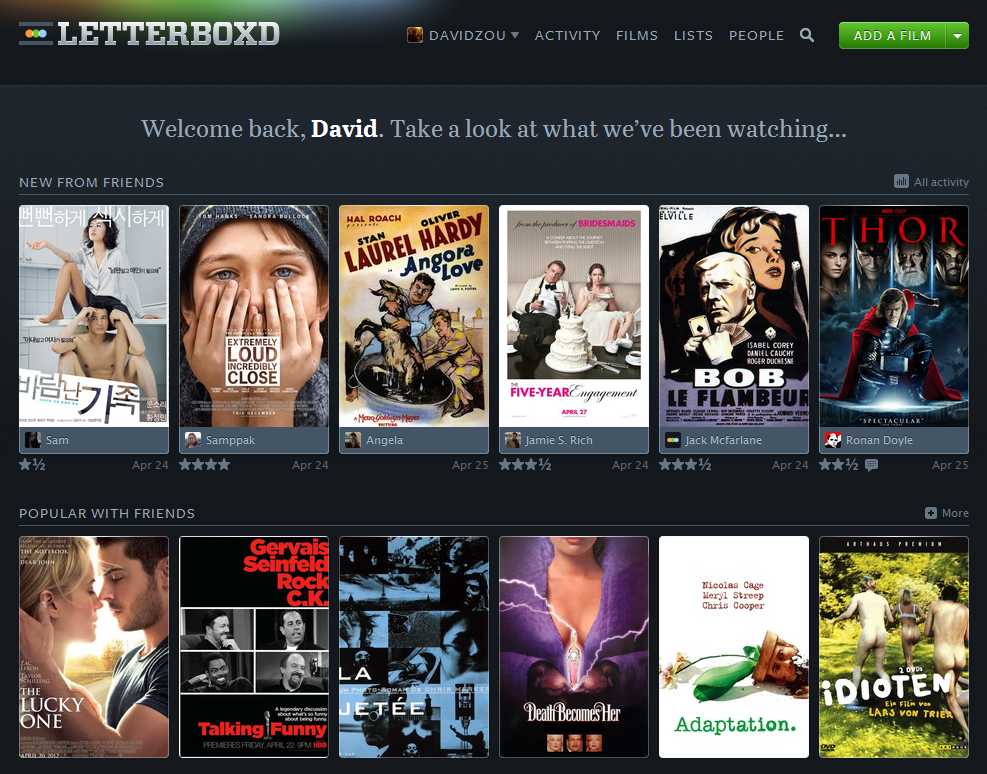 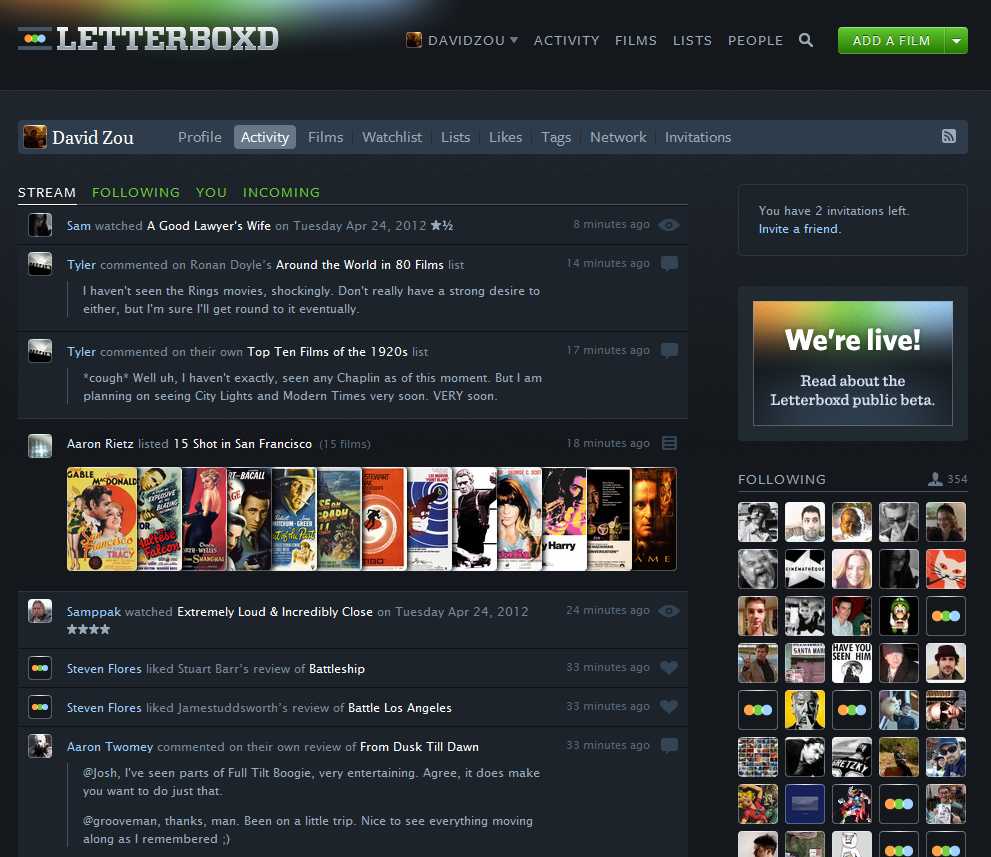 2.It allows you to make lists easily.

YES,you can make lists as easily as it gets on Letterboxd.If you are a list-making-maniac just like me,this is the ideal place for you.It is really simple for you to make a list,just write the list title,then add films one by one from the database,if you want more exposure,you can add descriptions and tags to it. 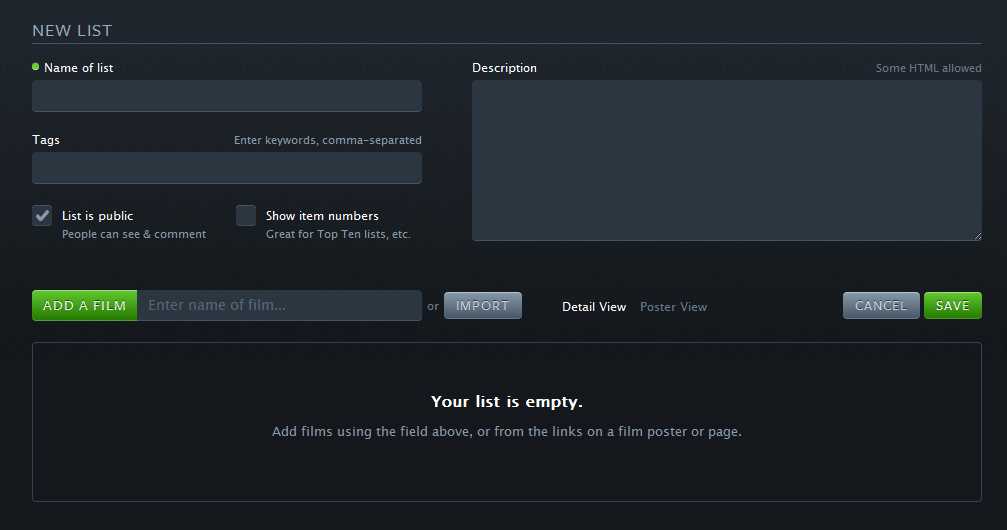 3.You can always discover great things on it.

Don’t have the habit of making lists?How about reading some interesting ones? On Letterboxd,there are tons of brilliant lists,like Ensemble Assemble,a list of films with amazing casts,or They Don’t Make Em Like Cary Grant Anymore,a list of Cary Grant’s top 25 films.If you feel like finding some nice films for your weekend viewing,there is no better place like here.You can easily get access to the latest list made by your friends or the hottest list on the entire platform,then track down every film you are interested without leaving the site.Also,if you are lucky,you can find some real good blogs on people’s profile pages.

4.It is a dream place to promote your blog if you have one.

If you have a blog,you will find anywhere possible on Internet to promote it,well,you can’t find any place better than here,where all users are nothing but film lovers like you.You can place your blog address on the right side of your avatar and also in your bio.You can insert one of your post url in your latest accomplished review or list.Once you get popular on the platform,you have the second chance to give your own blog more exposure.

5.It is easy to get social.

Besides recording films,another major function of this site is meeting more friends who share the same cinema taste with you.You can always find such people by digging in the reviews of your favorite films or reading lists which include your favorite films.Once you reach someone’s profile page,you have enough necessary evidence to make a second judgement if this guy is gonna become your future friend,just by looking at his/her favorite films and recently viewed films and some reviews on profile page,you get a general idea of his/her taste.Also,you can connect your old friends on Facebook,Twitter and Netflix by a simple click and you are united again. 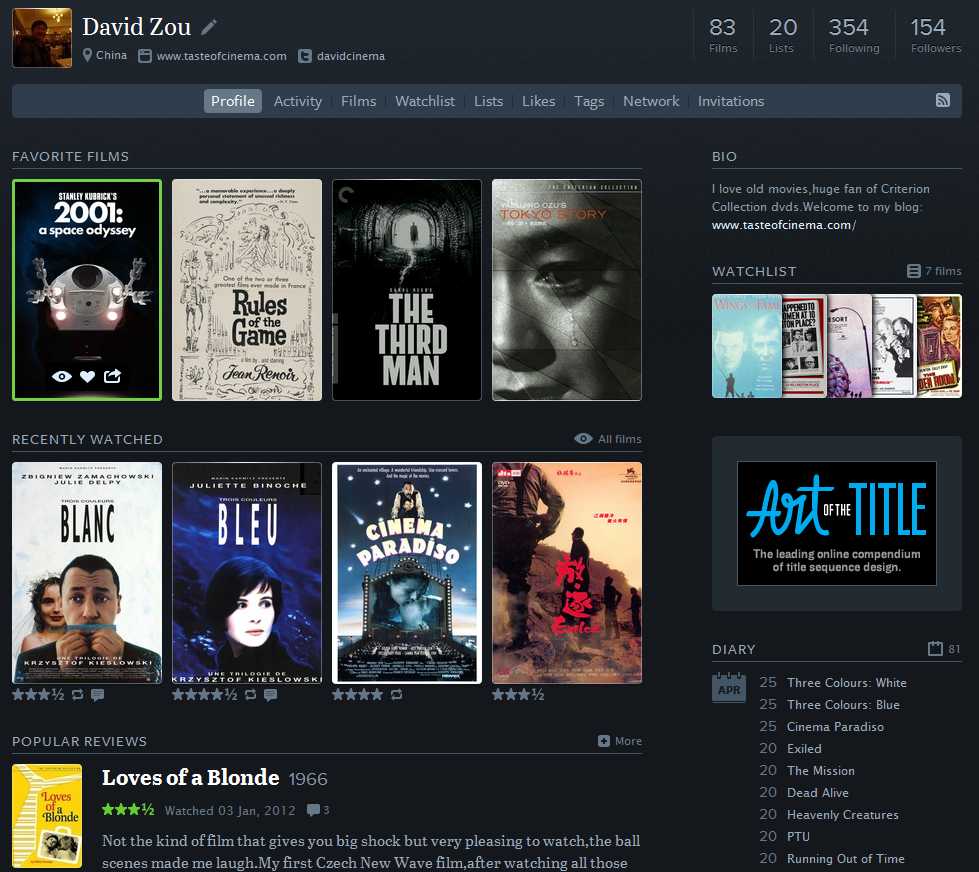 6.They care about users.

As far as I know,the stuff behind the scenes really care their users,that is one thing I really concern as a user of a site.They are not like some new site which rush in quickly and only care about money,they take time to develop everything,the beta stage lasts almost half a year,it gave them an opportunity to refine their service, and to add new features.They are taking feedback very positively both on the site itself and on twitter.I remember once I made a suggest to them on twitter,the reply came back very quickly.I hope they remain consistent as the site grows.

As a movie social network,film database and active user are two elements that mostly matter.Here are some data they provide in their latest news:” we’ve attracted more than 17,000 beta testers, who have collectively written some 80,000 reviews, compiled close to 10,000 lists and added over 2 million films to their online diaries.The top third of users spends over ten minutes every time they visit, and this is reflected in the number of pages we’ve served to account holders: over a million per month in March and April.” It looks like this is not something that would turn to be a ghost town like Google plus.

Finally,I strongly recommend this site to all film lovers who watch films on a regular basis and like to interact with people.Don’t forget to follow me after your registration,I will meet you there.