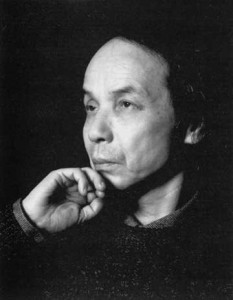 Masahiro Shinoda’s Pale Flower has profoundly impressed me with its mysterious and captivating plot as well as its diversified special features. The 30-minute selected scene commentary on Toru Takemitsu’s scores was indisputably a marvel. As a big fan of Toru, I do feel it necessary to eulogize his musical accomplishments in the realm of movie.

My acquaitance with Toru’s movies was largely attributed to Criterion Collection. I was overwhelmed by his music in Kwaidan of Masaki Kobayashi, as the unfathomable mystique of his music sent me a shiver down the spine and  electrified me with terror and bewilderment. Later on I further delved into other movies scored by Toru including the Pitfall, Silence, Face of Another and Harakiri, naturally, I was intoxicated with the astounding similarity of the mysterious musical notes in each movie and meanwhile captivated by the different emotions and expressive approaches conveyed in each piece of music. The scores were so incredibly fascinating that I sometimes wonder whether my addiction to these Japanese movie masterpieces was solely due to the music.

According to the special features, Toru preferred to read the script before he created music. He was always as diligent as directors, punctually arriving at the set, collecting sound on the set in a bid to apply it to his scores. One distinct feature of his creation was that he maintained that sound was an ineradicable element in score, since music and sound collectively contributed to the development of plot. Such perspective meanwhile extended my comprehension of movie score as well. It would suffice to mention the rustling sound in Empire of Passion, the snow sound in Kwaidan, the sound of quicksand in Woman in the Dunes, the sound of wind in Hara Kiri and the sound of dealing cards in a casino in  Pale Flower. Viewers could always identify with the movie characters and plots by indulging in such sounds.

Another feature of Toru’s music was his application of silence. Silence could sometimes better intensify violence, solitude and conflicts. The first fierce battle in Ran was accompanied with not the turmoil of fighting and bloodshed but  suffocating silence. Woman in the Dunes and the Pitwall also exemplified the role of silence in movies. Such skill enlightened Spielberg in his Saving Private Ryan and Peter Jackson in the Return of the King.

Toru Takemitsu’s creation reached its peak during the 1960’s when collaborating with Japanese New Wave (Nuberu bagu) directors Masaki Kobayashi, Masahiro Shinoda,Hiroshi Teshigahara,Nagisa Oshima.Besides the scores composed by him,these movies themselves have great quality.If you are interested,you can click here to check them out.