I recently watched 2 films starred Ingrid Bergman(one of my favorite actress),they are Gaslight and Under Capricorn. 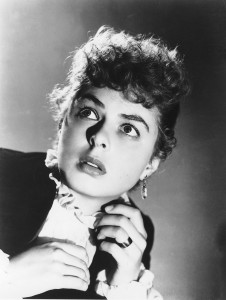 I always got the wrong impression that Gaslight is directed by Alfred Hitchcock,and I was unaware of it until I got both films mentioned above during my last dvd hunting.I know that Ingrid had only worked with Hitch three times,and I have seen both Notorious and Spellbound,so it’s obvious that the third one is not Gaslight but Under Capricorn.

But I was still more interested in Gaslight since Ingy won a Oscar with it and George Cukor is the director,I watched it first.Surprisingly,it is totally Hitchcockian to me,it has every element included in a Hitch’s movies,murder,haunted house,paranoid woman,vicious man,smart detective,and I must list it as another “great suspense film not directed by Hitchcock”.

While Under Capricorn is so Un-Hitckcockian to me,the only evidence you can identify it is the master’s work are those long takes,but the slow pace and long dialogues make it so much like a George Cukor‘s film.

Can anyone think of another similar case that both directors of two films can be reversed without everyone knowing it?