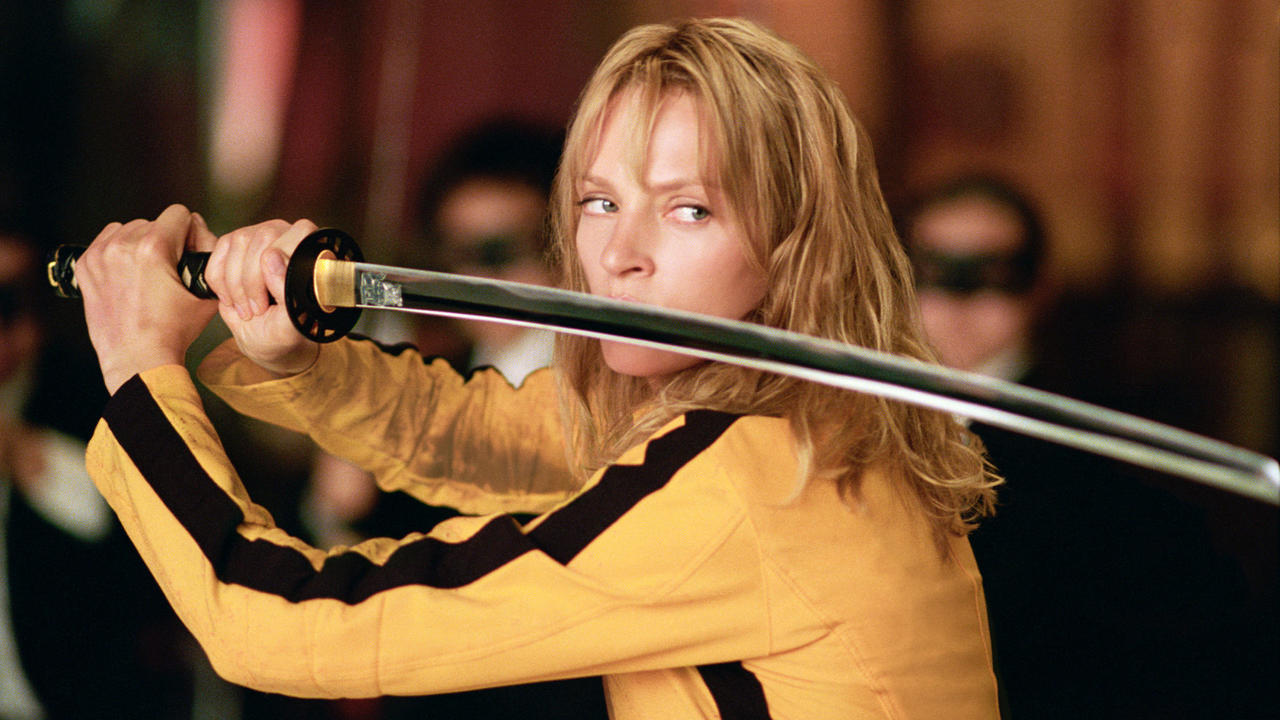 Few directors can drop music into their films quite as deftly as Quentin Tarantino, who wields his home album collection with the expertise of Zatoichi handling his walking stick. This is the man who edited Uma Thurman dancing to Urge Overkill and slicing up to Santa Esmeralda—and Michael Madsen doing both to Stealers Wheel. Even apart from his films, the soundtracks he assembles are mixtape masterpieces.

Tarantino has gone on record saying he’ll raid his album collection to figure out a film’s soundtrack before he even starts writing the script and that he could never trust the tone of a film to a hired composer (though Robert Rodriguez and the RZA did whip up some new music for his Kill Bill saga and Tarantino would break his rule for the chance to work with il maestro Ennio Morricone on The Hateful Eight).

Exceptions aside, Tarantino remains the expert at the needle drop.

Beyond his love for all manner of jukebox miscellanea, from country to soul to surf rock to disco-flamenco, Tarantino is also understandably well versed in ’60s and ’70s film music. Since Kill Bill: Vol. 1, he has taken to scoring more and more of his films with compositions from his favorite movies and TV shows. While he has surely raided Morricone’s discography more frequently than anyone else’s, he has nevertheless proved his tastes in film music as eclectic as anyone’s. Here are some of the most impressive uses of preexisting film music in Tarantino’s filmography. 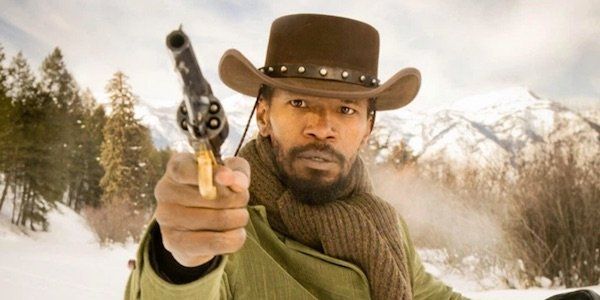 Tarantino first used Riz Ortolani’s upbeat title track from the spaghetti western Day of Anger very briefly during the climactic battle with the Crazy 88 in Kill Bill: Vol. 1. The track would reappear much more prominently some years later in Django Unchained’s snow-set training montage. While recently freed slave Django (Jamie Foxx) advances from shooting the carrot nose off a snowman to ambushing bounties in a snowy pass alongside German bounty hunter Dr. King Schultz (Christoph Waltz) the music clips along at a lively, galloping pace, cheering his progress with enthusiastic trumpets.

Toward the end of the montage, as Django and Schultz ride side by side toward a herd of caribou on a snowy plateau—presumably more partners now than mentor and mentee—the guitar takes on a more sweeping, more melodic quality. It’s all rather perfectly orchestrated the way the music follows Django’s journey. In much the same way that Sergio Leone would sometimes shoot scenes to match Ennio Morricone’s prerecorded score, it’s evident Tarantino constructed this sequence with “I giorni dell’ira” in mind, all the way down to the comedic beat of Waltz emptying spent shells from his bowler hat.

The Hateful Eight marks the only time in his ten-film career that Tarantino hired an established composer to write original music for him. Of course, that composer could only have been the legendary Ennio Morricone (whose music had already popped up with some frequency in Tarantino’s previous five films). Morricone had finite time to devote to The Hateful Eight but ended up writing a good thirty minutes of score to be sliced and diced and shuffled around. He suggested Tarantino round out the film with unused cues he had written for John Carpenter’s The Thing. Given the setting of a snowed-in cabin and all the paranoia that ensues, Morricone’s suggestion was pretty on the nose.

One of those borrowed cues was an aggressive string movement titled “Bestiality”—another, “Eternity,” an anxiety-inducing synth piece. But Tarantino went a step further and included a cue that actually did appear in The Thing. The track “Despair” which plays quite hauntingly when Kurt Russell’s R.J. MacReady discovers the alien ship in the ice lends a great deal of suspense to the climax of Tarantino’s snow western as well. Shades of The Thing abound in the scene already as Tarantino’s two badly wounded antiheroes struggle to hold themselves together while they gauge where allegiances lie. The music works both as a sly fourth-wall-breaking callback for those in the know and as the perfect embodiment of its namesake: despair. 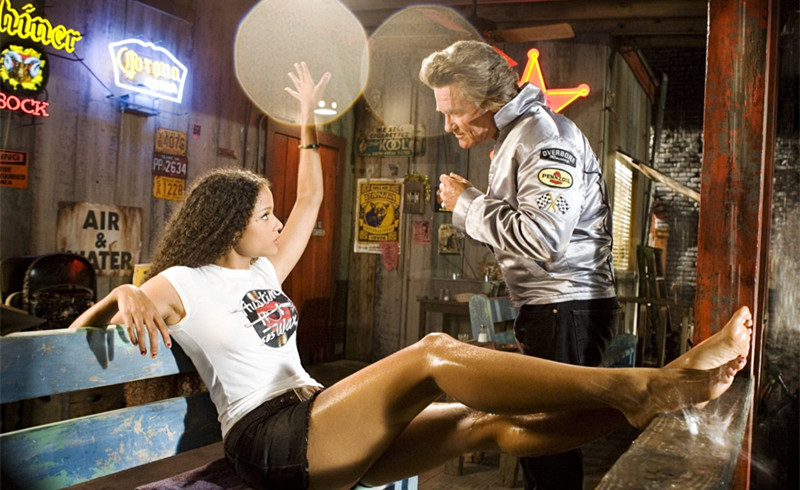 From the opening titles of Death Proof with miles of country road disappearing under the hood of a black Chevy Nova bearing a skull and crossed lightning bolts and more seconds of feet close-ups than are to be found in the rest of Tarantino’s films combined you know just what kind of ride you’re in for. Jack Nitzsche’s instrumental “The Last Race” plays no small part in painting the right impression. Sounding like it has one foot in the door of a surfer flick and the other in a biker pic, it’s the perfect mood setter: cheesy and breezy with an air of menace running throughout.

“The Last Race” was first featured in a goofy 1960s comedy about some rock-and-roll-loving teen delinquents who turn into giants and take over their town (with story credit rather audaciously going to H.G. Wells’ The Food of the Gods and How It Came to Earth). It’s easy to see how Nitzsche’s track could fit into such a picture but difficult to see how it could match any other film more perfectly than it does Death Proof. With its revving engines, outrageous horns, and rolling percussion, “The Last Race” feels like it was destined for Tarantino’s diesel-fueled twist on the slasher.

12. “The Demise of Barbara and the Return of Joe” from Navajo Joe (1966) by Ennio Morricone 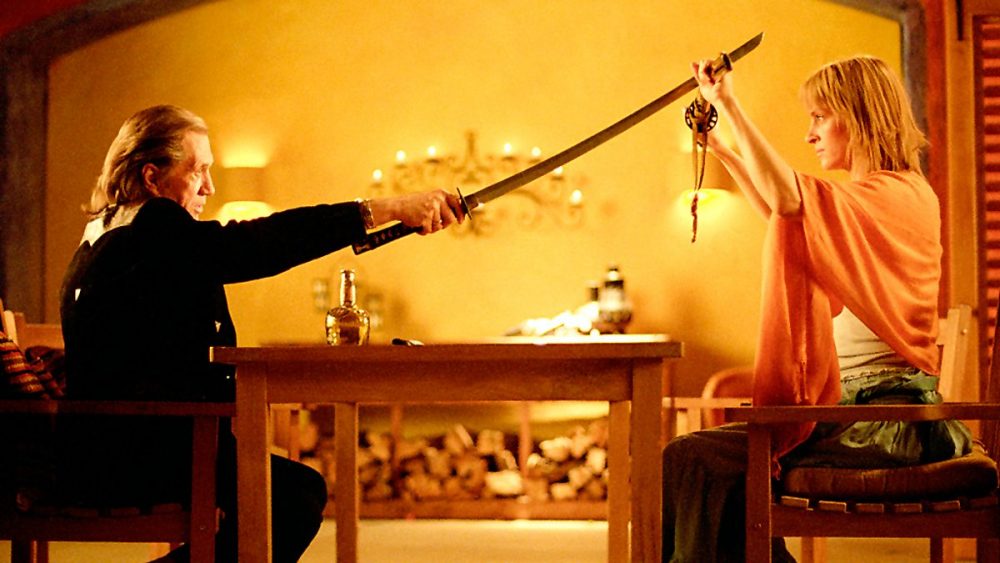 After the insanely bloody finale of Kill Bill: Vol. 1, it made sense that the long-anticipated showdown between Uma Thurman’s Bride and David Carradine’s Bill in Vol. 2 would be more about bandying with words rather than swords. When the two do finally go for their Hanzōs it’s over in a flash with Bill the recipient of Pai Mei’s “Five-Point-Palm Exploding Heart” technique, leaving him five steps to failure of the heart. As Bill prepares himself for those final five steps, Tarantino plays a lovely and poignant little melody from Ennio Morricone’s score for the spaghetti western Navajo Joe.

The cue, “The Demise of Barbara and the Return of Joe,” explodes into a dramatic yet dignified rendition of Navajo Joe’s main theme as Bill stands and buttons his jacket. The percussion and wailing vocals will remind the viewer of Morricone’s “A Silhouette of Doom,” another cut from Navajo Joe which plays over the opening of Kill Bill: Vol. 2 as the Bride promises she will make good on the saga’s title. Thematic continuity is one aspect of most traditional film scores that tends not to translate to Tarantino’s needle-dropping approach, but the callback here is a nice exception and most appropriate. While the music grants Bill his dignity in dying, it also permits the Bride her bloody satisfaction.

Perhaps not the most obvious choice for a ranking of Tarantino’s best uses of music, Keith Mansfield’s “Funky Fanfare” nevertheless does a lot of work in very little time to get the audience jazzed for the picture ahead in both Kill Bill: Vol. 1 and Death Proof. Just a snippet plays before both films while psychedelic spirals announce “Our Feature Presentation.” True to the track’s name, the happening trumpets declare the audience is in for a good time.

“Funky Fanfare” began life as a library track and was used for years by the National Screen Service in just this manner: to announce previews and feature presentations. Tarantino just popularized the track for modern audiences as only he does best. Those with sharp ears might also have heard it played diegetically in Once Upon a Time in Hollywood when Brad Pitt’s Cliff Booth pulls up to his trailer home behind a drive-in movie theater.

10. “Flight of the Bumblebee” from The Green Hornet TV show (1966) written by Nikolai Rimsky-Korsakov and arranged by Billy May 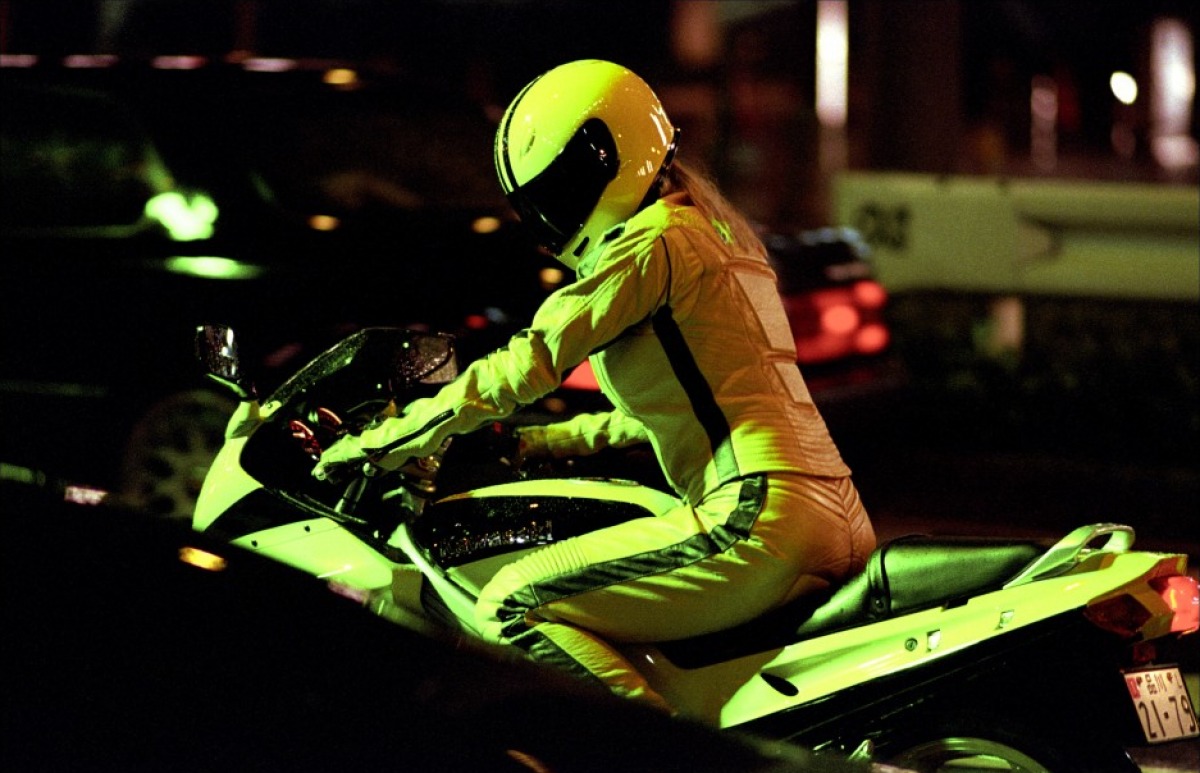 “Flight of the Bumblebee” was originally written by the Russian composer Nikolai Rimsky-Korsakov as an interlude for his 1899 opera The Tale of Tsar Saltan. A half century and change later, someone decided it would make a smashing theme for the Green Hornet TV show and the world was subsequently graced with one of legendary trumpeter Al Hirt’s most exhilarating performances. Flash-forward another thirty-odd years and Tarantino would use the dizzying track to propel his vengeance-seeking Bride from Okinawa to Tokyo on her quest to slay Lucy Liu’s O-Ren Ishii in the first volume of Kill Bill.

Following a more relaxed and reflective segment of the film where the Bride has a katana fashioned for her by Hattori Hanzō, the frenetic trumpet of “Flight of the Bumblebee” adds real urgency to her Tokyo arrival. As we cut back and forth between the airborne Bride glaring out her window at red skies and O-Ren’s black-tied, black-helmeted motorcade revving their engines under the city lights, the audience’s anticipation of the bloody showdown to come builds to a boiling point. It’s the appetite whetter—and a darned stylish one at that. Some of the more tongue-in-cheek trumpet flourishes gave Tarantino the opportunity to play up certain visual gags too (like when the Bride strolls by a Japanese ad for Red Apple Cigarettes featuring the very woman she’s tracking, Sofie Fatale).

9. “Italia a mano armata” from A Special Cop in Action (1976) by Franco Micalizzi and “La polizia sta a guardare” from The Great Kidnapping (1973) by Stelvio Cipriani 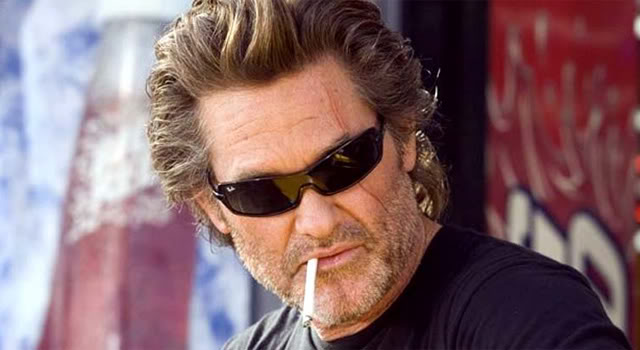 Tarantino put two very cool tracks from ’70s Italian crime thrillers to exquisite use in Death Proof’s climactic car chase. The first, Franco Micalizzi’s “Italia a mano armata,” blasts to life as the dueling Dodge Charger and Dodge Challenger jump a dirt ramp Dukes of Hazzard-style and swerve from dusty country roads onto a thoroughfare of modern traffic. The explosion of funky brass plays up the zaniness of these two beat-up icons of the ’70s weaving around timidly honking SUVs and sedans, completely lost in the world of their road battle. There’s real comedy to be found in the set-up, and the outrageously blaring trumpets invite the audience to enjoy every bit of it.

The second, Stelvio Cipriani’s “La polizia sta a guardare,” kicks in as Kurt Russell’s Stuntman Mike lets out a sigh of relief, thinking he’s lost his pursuers, only for the Dodge Challenger to appear in the background keeping pace on an elevated access road, like the fin of a shark rising out of the water. The track’s oscillating harpsichord and ominously growling bass further suggest the idea of a predator closing in on its prey before it turns into a kind of danger motif while the Challenger’s occupants plead for the road not to dead-end. It’s a fantastically suspenseful little needle drop that pays off beautifully when Charger and Challenger at last meet again.