8. “L’incontro con la figlia” from The Return of Ringo (1965) by Ennio Morricone 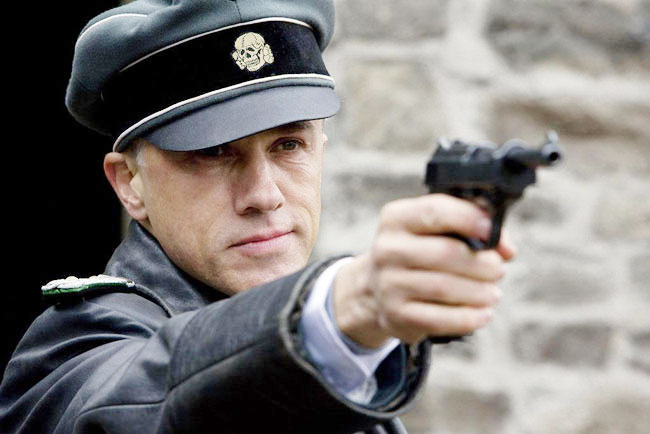 The role of Hans Landa in Inglourious Basterds launched Christoph Waltz to stardom—and rightfully so. He delivered just the panache, the poise, the comedic timing, and most importantly the cold, unsettling menace the film’s villain required. Waltz dominates the screen from the opening scene when Colonel Landa interrogates a farmer about a Jewish family he’s hiding beneath his floorboards. For the scene’s chilling climax, Tarantino required a piece of music that would emotionally live up to Waltz’s performance and the horrors of which Landa is capable.

Tarantino looked once again to the spaghetti western, 1965’s The Return of Ringo, and repurposed a harrowing track of Morricone’s full of desperate strings, thunderous brass, and ominously bellowing chorus. The maddeningly swirling strings work particularly well in underscoring Shosanna’s flight from the basement across the open pasture while the horns serve both to characterize Landa taking aim from the door and to foreshadow the scale of the bloodshed to come. In about sixty seconds of well-chosen music, Tarantino summed up his protagonist, his antagonist, and the conflict that would play out between them.

7. “The Braying Mule” from Two Mules for Sister Sara by Ennio Morricone 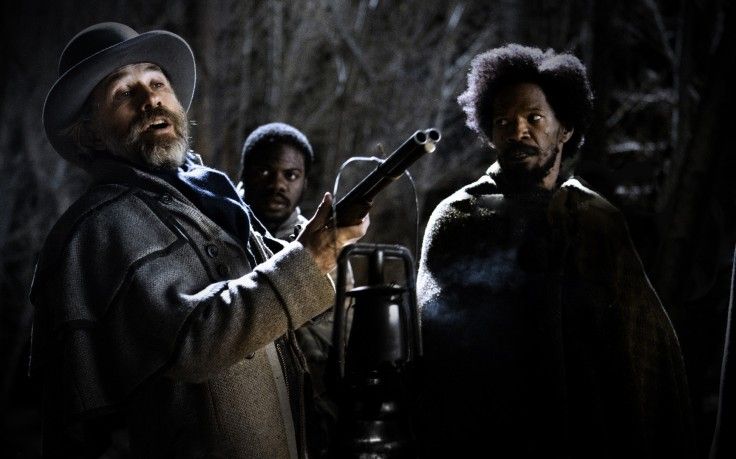 Ennio Morricone, film-scoring genius that he was, came up with some pretty unusual sounds for the westerns he scored, and Tarantino used one of the most instrumentally intriguing tracks of any of them as accompaniment for Dr. Schultz and Django’s ride into town toward the beginning of Django Unchained. The track in question is “The Braying Mule” from Don Siegel’s Two Mules for Sister Sara. A relentlessly twanging guitar provides the backbone of the track while a Native American flute floats mysteriously in and out and the occasional “hee-haw” of a clavioline keyboard alludes to the braying mule of the title.

Where Tarantino deploys the track, Schultz and Django have just formed an unlikely and very potentially uneasy alliance. Django hardly has a clear idea yet as to who this man Schultz is or what he’s after in this town they’re riding into. Morricone’s peculiar instrumentation beautifully captures the uncertainty of Django, the perplexity of the townspeople peering out their windows at the two, and the curiosity of the audience as they wonder just what is about to go down. It’s a very particular tone the music strikes, and it’s difficult to see too many other tracks working quite as well here. Just one more case of Tarantino finding the very most apt music with which to tell his story. 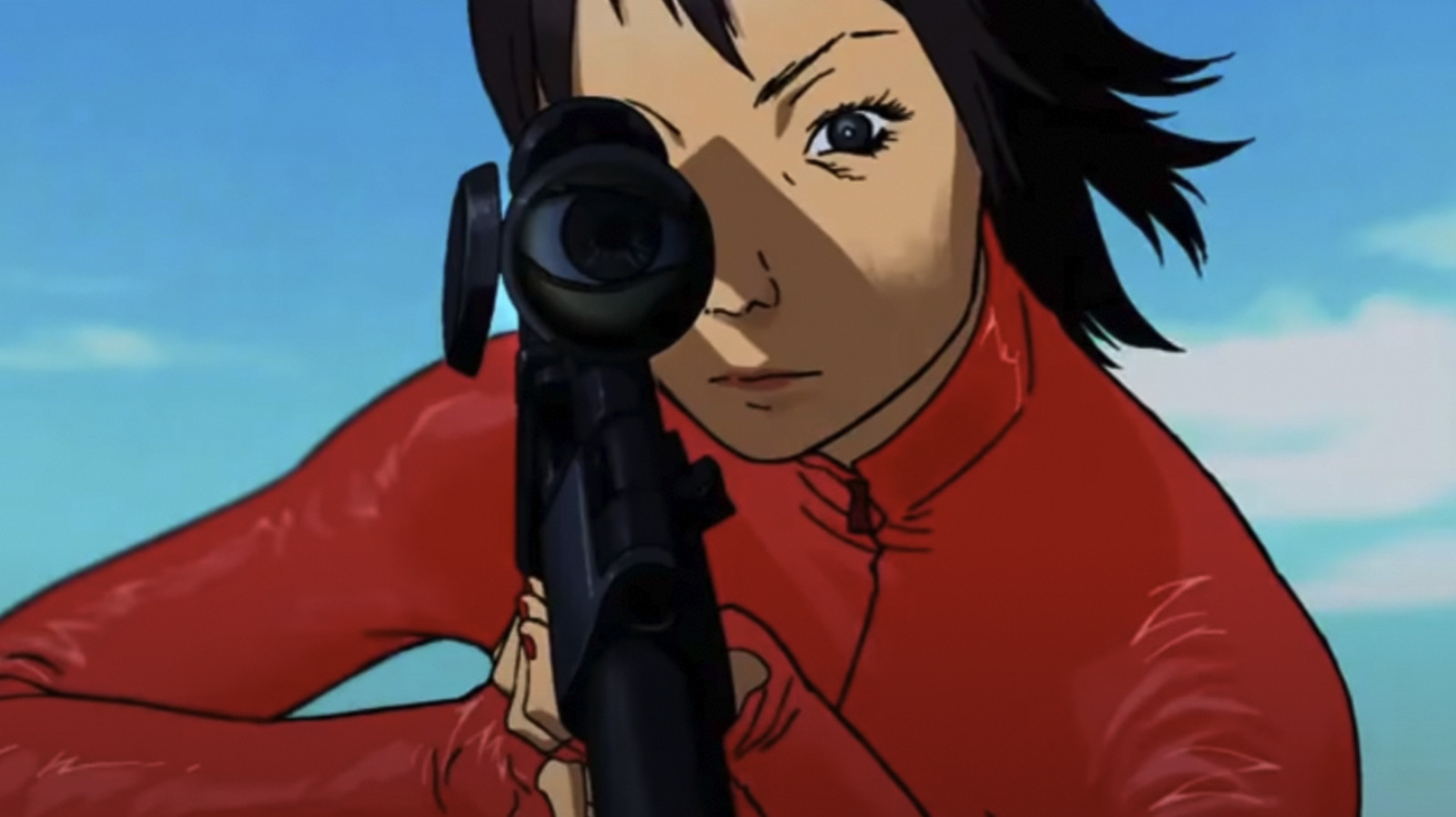 While Tarantino has demonstrated an affinity for playing with different genres and styles all the way back to Reservoir Dogs, Kill Bill: Vol. 1 was the first film where he blended genres in a really big and splashy way. This blending was perhaps nowhere better seen than in the Bride’s retelling of the origin of O-Ren Ishii where the picture switches to anime scored by music from spaghetti westerns and blaxploitation films.

Luis Bacalov’s “The Grand Duel (Parte Prima)” casually sets the scene for the flashback with some easygoing harmonica, drawing the obvious correlation between yakuza thugs and western outlaws, before swelling to grand, elegiac heights to mourn the death of O-Ren’s parents by the yakuza boss’s blade. When young O-Ren takes her revenge and Boss Matusmoto’s escort rushes in to be felled by her bullets one by one, the cool harmonica returns, only now it represents the killer O-Ren has become.

As a screen-filling splash of blood transitions us forward in time to the sight of 20-year-old O-Ren sniping a limo-bound politician from a rooftop, Isaac Hayes’ “Run Fay Run” from Three Tough Guys kicks in with a groovy combo of rattle, bongo, and tambourine. The change-up is dazzling and a further example of Tarantino’s ability to catch his audience off guard. Thanks in no small part to these memorable music selections, Kill Bill’s anime interlude remains one of Tarantino’s most inspired storytelling decisions.

“Sunny Road to Salina” by the French music artist known as Christophe became a sort of anthem for Kill Bill: Vol. 2 when it was splashed liberally across trailers and TV spots—and with good reason. With aggressively thrummed guitar and melodically swelling vocals grand enough to fill one of Sergio Leone’s vistas, “Sunny Road to Salina” was the perfect track to represent the Bride’s reaching the final stretch of her bloody quest for revenge.

The music feels strangely out of place in the film it was originally written for, The Road to Salina, where it accompanies a young man applying cologne and rummaging for food in the kitchen. Leave it to Tarantino to find a track from a little known French-Italian psychological thriller from the early ’70s and realize just how perfectly it would work against a spaghetti western backdrop. When an eagle cries and that music kicks in as the Bride, freshly back from the grave, walks out of the desert haze and on through a tumbleweed canyon, it truly feels as if this was the scene the song was always intended for. 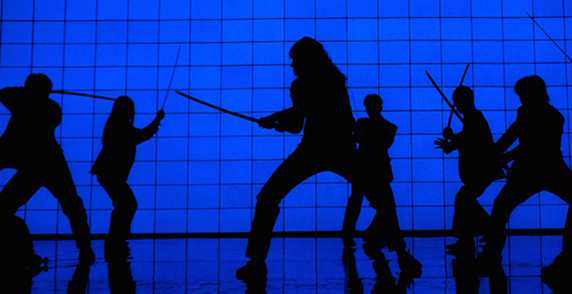 For a film billed as a “roaring rampage of revenge,” Kill Bill: Vol. 1 spends the better part of its runtime leading up to the point where the revenge actually occurs. By the time the Bride reaches the House of Blue Leaves, the audience thirsts for the showdown and all the swordplay and bloodshed sure to come with it. Tarantino scores the moment when the Bride and O-Ren finally meet again with a ferociously rousing spaghetti western track of Morricone’s known as “From Man to Man.”

While the Bride holds Sophie Fatale at swordpoint and calls for O-Ren to show herself, the anxiously strumming guitar, war-like percussion, urgent chanting, and sharp flute trills all work to ratchet the tension. There’s something both desperate and primeval in Morricone’s score that speaks to the Bride’s need for vengeance. When she slices off Sophie’s arm and the blood sprays fountain-like and seemingly without end, the music forbids you from laughing like you had at a similar gag played earlier in the film. Rather, Sophie’s blood fountain is to be read as a long-delayed unleashing of the Bride’s fury, a display every bit as ruthless and chilling as the accompanying cut of Morricone’s suggests. 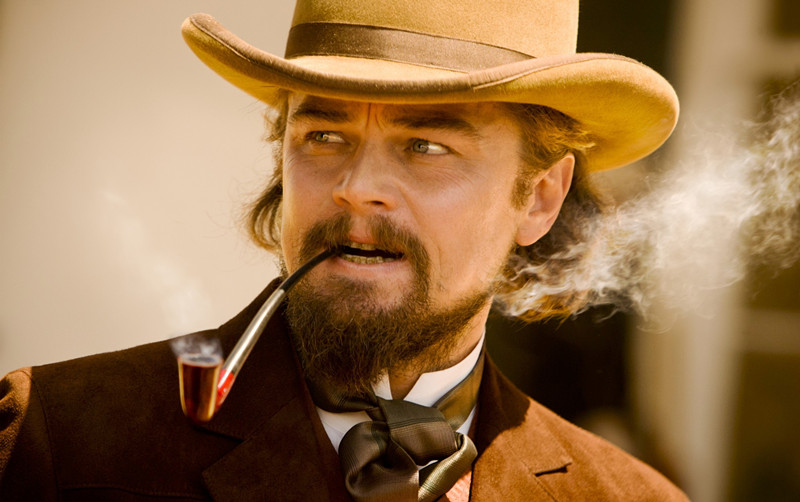 The moment in Django Unchained when our two heroes, Django and Schultz, follow Leonardo diCaprio’s sneering villain, Calvin Candie, into his plantation marks a true upping of the stakes for the film and thus deserved a soundtrack to match. Jerry Goldsmith’s pan-pipe-accented march “Nicaragua” from Under Fire proved a most unlikely but so very perfect choice. The track begins immediately prior to the entry into Candyland as an eerie sort of whistling starts up while Candie appraises Django and Schultz’s reactions to a horrific dog mauling, solidifying for the viewer the potential danger they’re riding into.

When the procession begins, the pan pipes play a beautiful dual role in both mocking the pomp and circumstance and providing an uneasy sense of foreboding. In fact, in Tarantino’s hands the march as a whole seems to fluctuate between disingenuous ceremony and deep trepidation with occasional heroic flourishes for Django and Schultz. There are a lot of emotions folded up in Goldsmith’s cue and a lot of characters with divergent viewpoints coming into play in this one scene, including the introduction of Samuel L. Jackson’s contemptible Stephen. There is true expertise on display in how Tarantino complements every one of these converging characters musically. 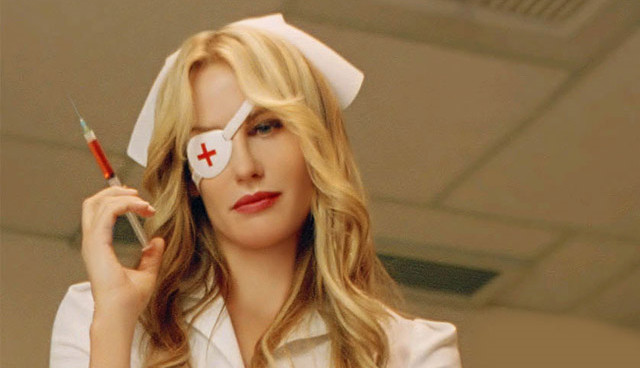 For the introduction of Daryl Hannah’s eye-patched assassin, Elle Driver, in Kill Bill: Vol. 1, Tarantino borrowed Bernard Herrmann’s playfully sinister main theme from the 1968 psychological thriller Twisted Nerve. The track’s cheerful whistling (presumably produced by Elle herself within scene as she strolls down the hospital hallway en route to her comatose victim) and warm, billowing celesta tones gradually give way to a much darker, more foreboding sound as De Palma-esque split screen shows the assassin preparing her cyanide-in-a-syringe cocktail.

The cue’s brass and woodwinds reach a kind of screaming climax as Elle heads grimly down the hall with death on a tray. The final vibrating note is punctuated by a great roll of thunder from the storm outside. As is so often the case when Tarantino is at his best, the scene deftly toes the line between humor and horror, and Herrmann’s music plays a significant part in that. It’s both playful and menacing, both perfectly on key tone-wise and completely over the top, leaving the viewer a mix of delightfully clashing emotions inside and just where Tarantino wants them. 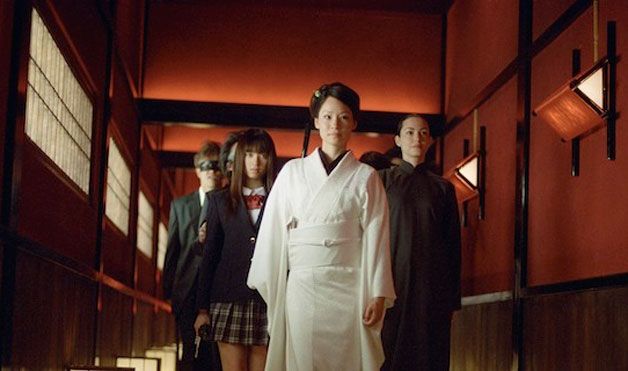 The track that immediately and single-handedly defined the essence of Kill Bill: Vol. 1—which is “more style than you can shake a stick at, substance be damned.” While Tomoyasu Hotei’s “Battle Without Honor or Humanity” would go on to represent the sound of “cool” in countless commercials, sports broadcasts, TV shows, and other films, no amount of overexposure or parody could detract from the intoxicating effect the guitar-powered instrumental has when heard over O-Ren and posse strolling into the House of Blue Leaves in slow-mo like the cool kids coming down the hall.

With rhythmically rolling percussion, smart blasts of brass, and cocky, reverberating electric guitar, Hotei’s track proved the quintessential entry music. Nailing an impeccable synergy between picture and audio, Tarantino somehow made the idea of Lucy Liu and a bunch of bubble-gum-snapping yakuza walking in formation cooler than it already is. Have there been more meaningful or more inspired uses of music in Tarantino’s oeuvre? Undoubtedly, but perhaps none so definitively cool as his handling of “Battle Without Honor or Humanity.”