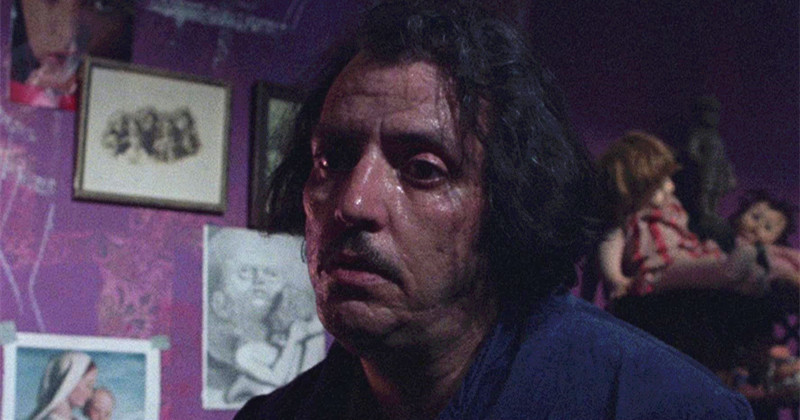 As one of the more controversial categories of the horror genre, the idea of the slasher movie made its way into existence many years ago and has made its presence known ever since. While Freddy, Jason, and Michael have become famous figures not only in the slasher genre but in pop culture, it is important to look back on some of the slasher films that have fallen into cult status. The films that allowed iconic slashers and slasher rules to find success among a wide number of audiences.

Here is a list of 15 great cult slasher films: 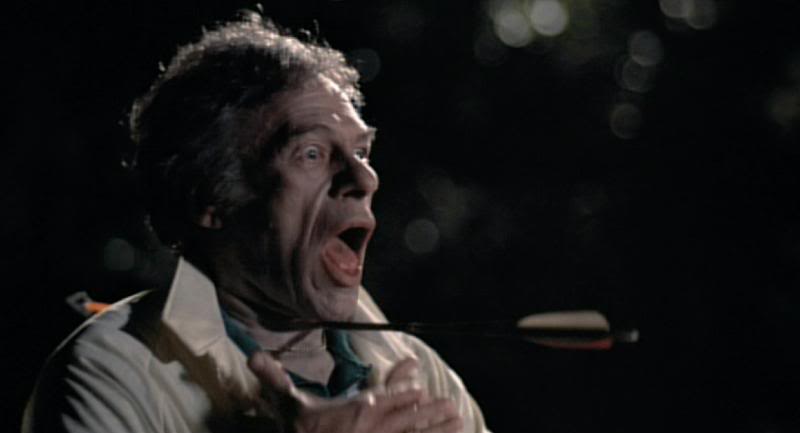 While Sleepaway Camp may not be many movie-goers’ first choice for the “killer in the camp” film, it does provide a few new and interesting tricks to shake up the slasher movie formula. The film opens with a bang as it depicts a family death due to a tragic boating accident. After the incident, the survivor of the event, Angela (Felissa Rose), is now living with her bizarre aunt (Desiree Gould) and heading to Camp Arawak with her cousin Ricky (Jonathan Tiersten). Unfortunately, Angela and Ricky soon realize they picked the wrong time to go to summer camp as a series of murders start to take place.

This low-budget thriller is a quick watch that works greatly due to its understanding of itself. Sleepaway Camp does not overstay its welcome and knows perfectly that it is an hour and a half build up to a legendary ending. This is not to say the beginning or middle of the film is not entertaining. Rose’s blank stare and uneasy attitude towards the other kids at camp are creepy and it does make viewers want to know more about Angela. There is also a relatable yet strange awkwardness to the campers. They truly are kids. They cuss like kids, talk like kids, and even insult each other like kids (for better and worse). Lastly, there are some memorable kills. One murder involves a curling iron that creates an image in audiences’ heads so graphic they will never want to revisit it.

However, all these points do not remotely prepare spectators for the conclusion of Sleepaway Camp. The ending is not predictable or improbable. Instead, it is a complete surprise with placed clues throughout the film that makes the final moments shockingly possible. No more can be said about a conclusion that may lack artistry but leaves its audience with a reveal that will be ingrained in viewers’ minds for years to come.

Sleepaway Camp is not a film without faults, but it makes up for them with brashness and the boldness of its final moments.

Part crime drama, part slasher movie, The Town That Dreaded Sundown heavily embraces the true story elements of its tale to produce some effective scares. The plot of the film is simple but nonetheless spine-chilling. The movie follows the events of the Texarkana Moonlight Murders committed by the unidentified Phantom Killer.

Between the narration by Vern Stierman and the movie claiming, “the incredible story you are about to see is true, where it happened and how it happened; only the names have been changed”, it is clear the movie employs exploitation tactics to generate terror. While exploitation may not be the most intellectual or sophisticated way to create horror, that does not mean it cannot be wildly helpful in the slasher genre. The slasher genre is all about violence and bad taste. At times, any film can go too far, but The Town that Dreaded Sundown is not that dangerous.

The true-crime element is the catalyst that makes this movie a straightforward but worthwhile watch. Along with the narration, the lack of a musical score and stingers make the killings scarier to witness. The heavy breaths and disturbing noises of the killer are also clear and distinct thanks to the lack of music. Therefore, all spectators are left with at times is a masked maniac willing to do gruesome things to innocent human beings.

Whether a horror fanatic, a true-crime junkie, or both, The Town That Dreaded Sundown is a film worth a viewing. 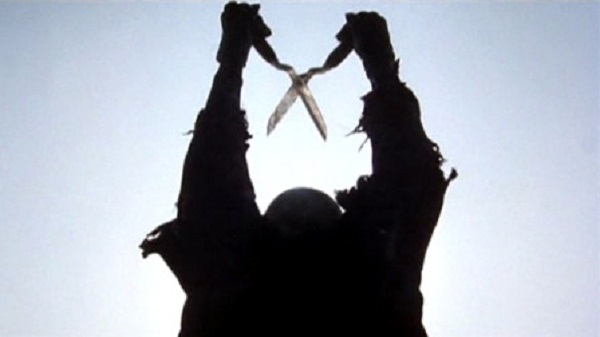 Appearing to be another 80’s slasher film in a collection of many, The Burning sets itself a part by cleverly playing with slasher tropes. In the movie, a group of teenage boys pull a prank on the camp’s caretaker, Cropsy (Lou David). The joke goes too far and Cropsy catches fire while being left for dead. Cropsy does not die, but he is instead seriously burned and disfigured. With hate and vengeance for the campers who disfigured him, Cropsy decides to inflict his murderous rage on a new troupe of summer-camp teens.

The Burning does not criticize the slasher genre. Rather, The Burning puts slight twists on the slasher blueprint. For example, the point of view shot from the killer has been seen countless times, but The Burning alters this action just slightly by clouding the camera to show the killer’s altered eyesight due to his scorched skin. Regarding the teens, many of them are likable and have fleshed-out personalities. As a result, terror increases as viewers realize there is no obvious dead meat in the bunch. Anyone is fair game for Cropsy. There is also an extremely interesting role reversal. Instead of a final girl running away from the crazy killer, the film provides a final boy who may have been killed off in other slasher movies of the time.

In addition to the play on classic stereotypes, it must be mentioned that Tom Savini’s effects are genius. From an intimate moment turned bloody to a raft massacre, garden sheers have never been so terrifying and the days before heavy CGI use have never been more missed. The practical effects are works of art and pure expertise.

The Burning is truly an early classic of the slasher genre. 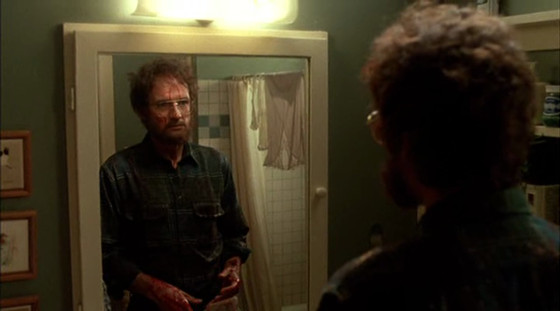 Taking the slasher out of the woods and bringing him to the suburbs, The Stepfather takes the phrase “family drama” to an increasing deadly level. Jerry Blake (Terry O’Quinn) is a family-oriented man who falls in love with a widow named Susan (Shelley Hack). Her daughter, Stephanie (Jill Schoelen) is not pleased about this coupling and begins to worry that there is something off about Jerry

The Stepfather rightfully makes this list because of the brilliant performance of O’Quinn. He steals every scene he is in from beginning to end. O’Quinn does not need a mask to make him menacing. He does not need monstrous features, a unique weapon of choice, or a detailed backstory. Through his facial expressions and his calm manner, O’Quinn is able to have bursts of energy where the even-tempered facade is dropped to reveal his sanity cracking. These spurts of anger and madness are all viewers need to fear Jerry and imagine the worst as the film proceeds.

The Stepfather is a must-watch movie that portrays the diversity of what a slasher can be. 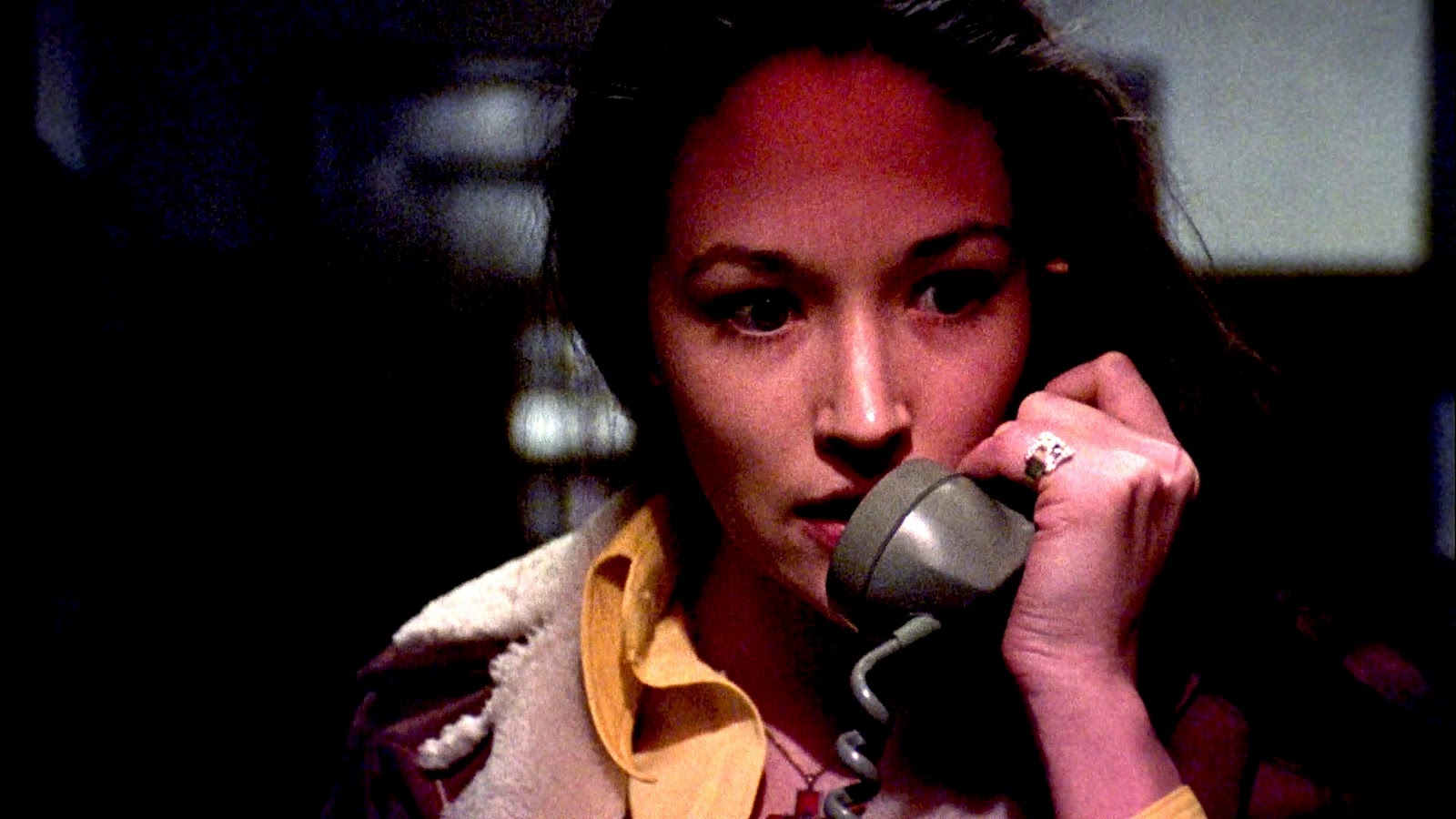 Through a multitude of remakes and reboots, none will ever match the impact of the original Black Christmas. The movie depicts a group of sorority sisters, including the main protagonist named Jess (Olivia Hussey), start to receive abusive and threatening phone calls. Soon, one of the girls, Claire (Lynne Griffin), goes missing from the sorority house, and another local girl is murdered. These killings make the girls realize they are not as safe as they presumed.

Films such as Halloween and When a Stranger Calls are given credit for being some of the first slasher movies that started the genre, but it is extremely important to include Black Christmas. The distinct qualities of the slasher genre can be consistently found throughout the film. The murderer, the calls, the mystery, the point of view perspective, and other choices highly praised in well-known slasher films occurred first in this 1974 gem.

The main aspects that stand out in Black Christmas are the phone calls. Besides moments of dialogue, a looming dread caused by silence is apparent. It is only broken up by the voice of the killer or Christmas jingles that feel more distressing than merry. The lunatic’s voice is piercing, shrill, and everchanging. There is a such a variety of tones used and frantic words spoken that it becomes absolutely chilling and only allows for a dark glimpse into the erratic nature of the killer’s troubling thoughts.

It is difficult to pinpoint the exact date or precise film that created the popular slasher genre, but Black Christmas is an excellent place to start. 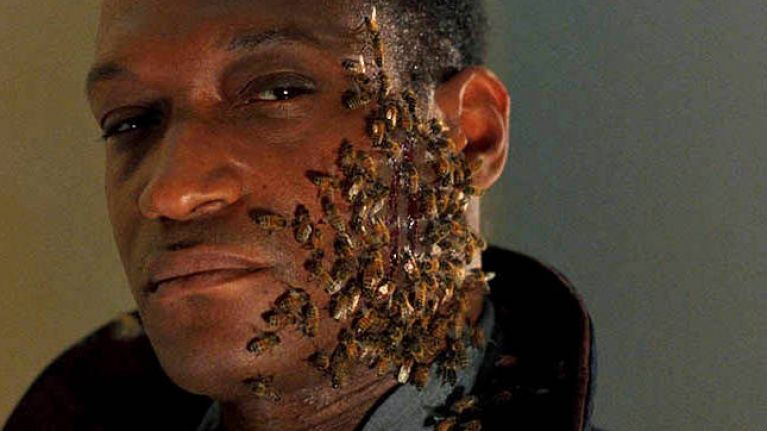 Based on a short story by the horror icon, Clive Baker, Candyman shows what occurs when the boogeyman from an urban legend is more than just folklore. The film follows a graduate student, Helen Lyle (Virginia Madsen), as she researches superstitions in a poor housing project on Chicago’s Near North Side. Eventually, Helen discovers the tale of the Candyman (Tony Todd), an urban legend that some believe is responsible for a recent murder. After a mysterious man fitting the Candyman’s description begins to stalk Helen, she discovers the Candyman is all too real.

While Candyman may sacrifice some of its nuance with gore, the movie is not void of thought-provoking concepts. The slasher qualities of the movie are combined with real, strong ideas on urban society and has a clear desire to use horror to address valid social issues. Todd’s Candyman is also given a background that tells a story of racial biasness and bigotry leading to death and the creation of the Candyman’s existence.

The last point that must be mentioned is Todd’s performance as the prominent villain. The Candyman is a slasher, but shockingly alluring even with a hook for a hand and a love of bees. He is confident and articulate. There is a sophisticated and terrifying gravitas that Todd brings to the character. 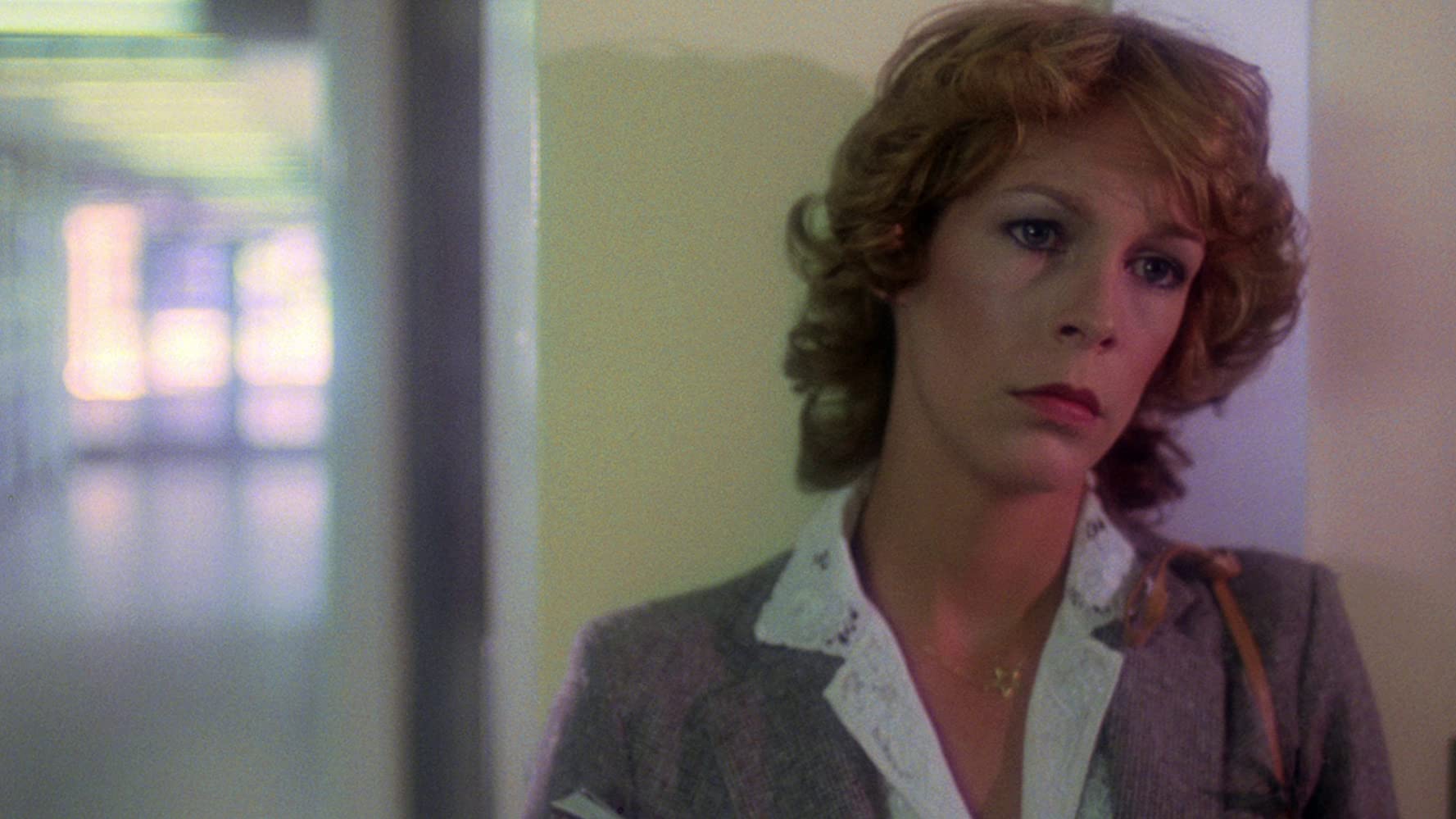 Prom Night is not the scariest movie presented on the list nor it is the most original, but its sincere love of 1980’s cheese makes this movie an amusing viewing. This slasher movie sees a killer out for revenge due to the death of a young girl who died thanks to the relentless bullying of her classmates. Now in high school, the former bullies start dying one by one, and the dead girl’s sister, Kim Hammond (Jamie Lee Curtis), may not be safe either.

Subtlety and finesse are not words one uses to describe Prom Night. One of the scariest scenes in the film is the 3 minutes of Curtis disco dancing with questionable choreographed moves. This may seem like an insult, but in fact, it is a compliment towards this movie. The dated celebration of disco music and youth culture cannot help but put a smile on viewers’ faces. There is no sense of cynicism in its glorification of clichés or in the naivety of its seriousness. The haunting secret and the traumatic childhood event are just some of the tropes horror fans have learned to love and can see in this film. Prom Night also takes itself seriously no matter what the situation is. Whether it be the “impromptu” disco dance-off or the lineup of obvious murder suspects, the severity applied to the premise is amazing.