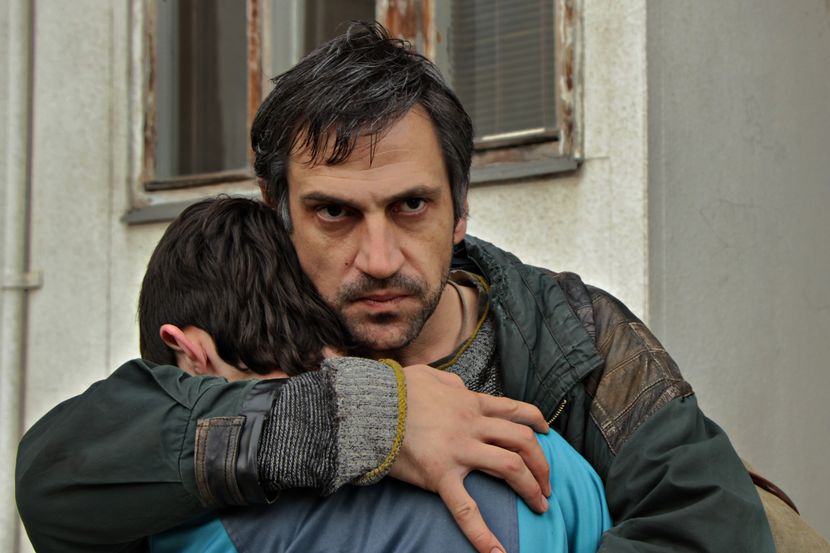 Father is director Srdan Golubović’s Serbian drama which memorably opens with a scene that’s very unsettling to witness. A mother with her two children in tow, arrives at the former workplace of her husband Nikola (Goran Bogdan). Unable even to afford food to feed them, she comes demanding to be paid the long overdue money owed for Nikola’s last weeks of work, or else she will pour a bottle of gasoline on herself and her children and set them all on fire.

Fortunately the flames are quickly extinguished and the children unharmed. She is taken to the hospital, the children are taken into care by the state and someone is sent to find their father where he is doing low paid menial day work. State authorities tell him that he can get his children back only if he can upgrade their home to certain standards. Sadly, after struggling to meet these demands, he finds out that the corrupt official in charge of their case refuses to return them to him. From here the film becomes a road movie as Nikola, penniless, sets out on foot for a 200 mile trek to Belgrade, to hand his appeal in person, to the Minister in charge of the National Ministry of Social Services.

This is a bleak and heartbreaking tale of the struggles of the poorest in society to meet even the simplest and most basic of necessities, the lack of help available to them from their government and the corrupt and greedy officials looking to profit from their misfortune. Although it is a very grim story, there are also some light and endearing moments during Nikola’s journey. The film features a powerful, quiet, understated, award worthy performance from Goran Bogdan as Nikola, who just continues to slowly and steadily move forward, one step at a time, doing everything in his limited power to provide for his children. His love and devotion are a constant; the glue that holds the film together. Although in more limited appearances in the film, the children too are a delight.

With Father, Golubović recalls the social realism in UK cinema that we’ve come to love from the likes of Mike Leigh and Ken Loach. This is the same kind of sensitive look at the plight of the working class, and Golubović is to be praised for this solid, tasteful and poignant work. It’s definitely a movie to be included in your VIFF 2020 viewing, but remember to have a tissue handy.