In many of his earlier films, Bong Joon-ho addressed numerous important social issues, like environmentalism, corporate greed and class inequality. That is hardly a surprise, considering Bong majored in sociology at the prestigious Yonsei University. In his native country of Korea and in cinephile circles, he is known for his nickname Bongtail (the combination of his last name and the word “detail”). By combining impeccable editing, brilliant sets and unforgettable characters with incredible attention to details, Bong demonstrated his ingenuity and brilliance once again.

As a result of his familiarity with the subject of class inequality and his eye for subtle and sophisticated symbolism, we got a modern masterpiece in the form of Parasite. Although crucial, the massive success of Parasite can’t be attributed solely to these reasons. A considerable factor in the historic accomplishments of the movie must be found in its universal relatability. And we have our global intertwined economies to thank for that.

Wealth and income inequality have soared in the last few decades all over the world. Famous economist Thomas Piketty and his team showed that between 1980 and 2016 the richest 1% received 27 cents of each dollar of global income growth. This was more than twice the share of the bottom 50%, who secured only 12 cents of every dollar. The world’s 2,153 billionaires have more wealth than the 4.6 billion people who account for 60 percent of the planet’s population. Wealth inequality is ever-present whether you live in Nigeria, Italy, Korea or in the United States, and that is why this movie resonated with audiences across the globe. 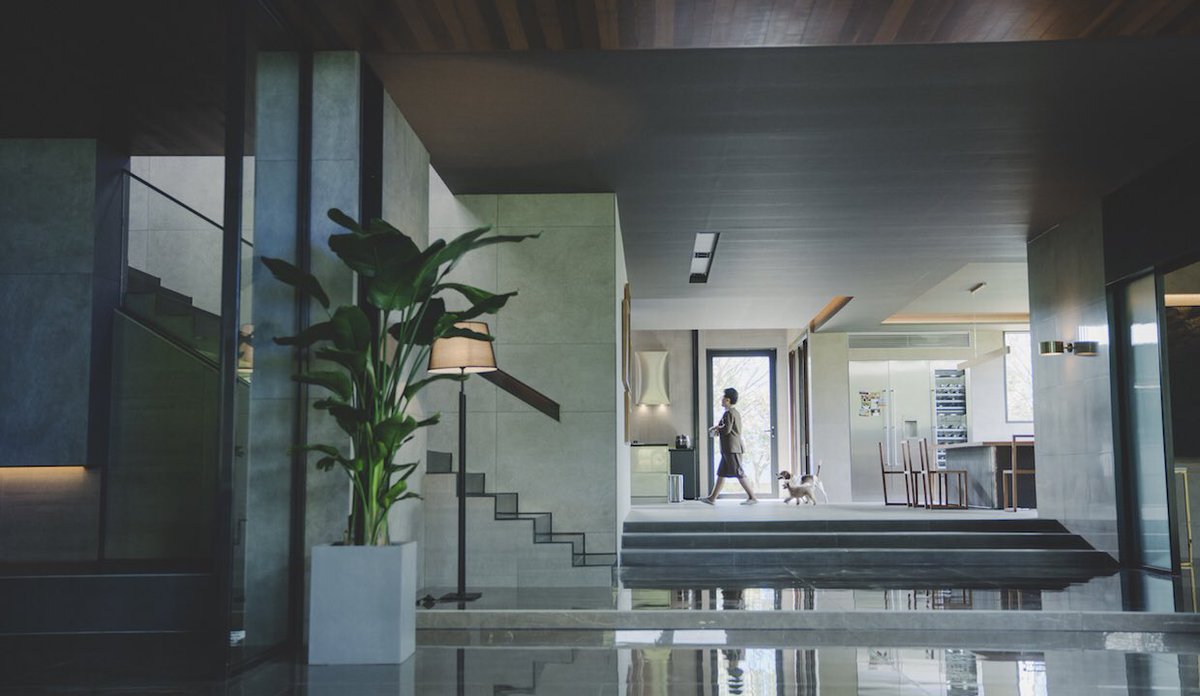 From the opening scene of the movie, we can already get a glimpse of Bong’s visual narrative when the camera pans down from the ground, yet remaining above Ki-woo’s head. From the start of the film, the director uses camera movement to insinuate the socioeconomic position of the Kim family.

The central metaphor in this symbolism-rich movie are the stairs. Bong views stairways as a crucial tool in conveying the message of social mobility to his audience. Our characters are constantly seen going up and down the stairs depending on their position in the social hierarchy. Even the ensemble cast made jokes about Parasite being a staircase movie.

When Ki-woo starts his journey to the Park house for the first time, he can be seen going upstairs just to set his foot on the ground. To get to the rich neighbourhood, he needs to climb hefty amounts of ground. It then seems that the Park’s gate is located at the highest point of the already very elevated wealthy area. Having climbed another set of stairs in the backyard, he finally enters the house.

Relying solely on the astonishing visual language of his work, Bong successfully managed to show us the incredible contrast between extremely wealthy and poor members of today’s society. The most impressive example of this is probably the sequence of scenes in which we follow the Kims escaping the Park mansion in what almost seems like a never-ending journey of descending an infinite number of stairs.

Exposure to sunlight represents another important metaphor in Parasite. Kim’s household has only two windows (second, ironically in the bathroom), so their exposure to natural light is limited to maybe an hour a day. Unlike the Kims, the Parks can basically bathe in the sun every day. They own a massive backyard with vast amounts of open space and their house is full of enormous windows.

It is no coincidence that in the scene when Ki-woo climbs to the Park house, as the camera follows him from the back, the audience is temporarily almost blinded by the sun. In fact, the Park house is purposely built at an angle that allows for that scene to happen. That’s just how vital this symbolism was to Bong. The higher up in society you are, the closer you are to the sun, both metaphorically and physically.

3. The semi-basement and the absence of middle class

The Kims live in a semi-basement, which is half overground, half underground. A semi-basement is used to symbolize the simultaneous existence of hope and fear in the minds of the Kim family. They can catch a glimpse of the ground from their windows, and they hope to climb up the social ladder and live above ground someday. But they are also aware that they can end up even further down, completely underground.

In most of the countries in today’s world, the middle class is slowly but surely disappearing. And in Parasite, all characters are either rich or poor. There are only poor and poorer, and the middle class is nonexistent. That can’t be a coincidence in a Bong movie.

There are numerous examples in which Kims are alluded to as being parasites in the movie. Foreshadowing a future event, Chung-sook compares her husband Ki-taek to a cockroach at one point. The bug extermination scene at the beginning of the film is another example.
In the first scene, in which Ki-woo is in the rich Park neighbourhood, we can see him next to what appear to be creeper and liana plants surrounding the walls of buildings.

What characterises these plants is their invasive and fast-growing nature as well as the damage they bring upon surrounding plants and their hosts. They represent another possible allusion to the parasitic nature of the Kims.

Bong even played with the names of the Kim family. In Korean, the word for Parasite is Gisaengchung. The names of three out of four members of the Kim family start with the syllable Ki (Ki-taek, Ki-woo and Ki-jung), and since Gi and Ki are pronounced the same in Korean, that means they have the same first syllable as the word for Parasite. And in Chung-sook’s case, the first syllable of her name is the same as the last syllable of the word.

But does that mean that in Bong’s eyes, the Kims are the parasites after all? Not necessarily. All of this symbolism can just mean that the society sees Kims as the parasites, not that they are the real parasites. After all, Parks are the ones who are incapable of doing what most of us consider basic and everyday chores and responsibilities like cooking, cleaning and childcare.

In that sense, the Parks are dependant on the hard labour of the Kims, giving them only small and meaningless amounts of their money in return. Can’t that be considered leeching too? 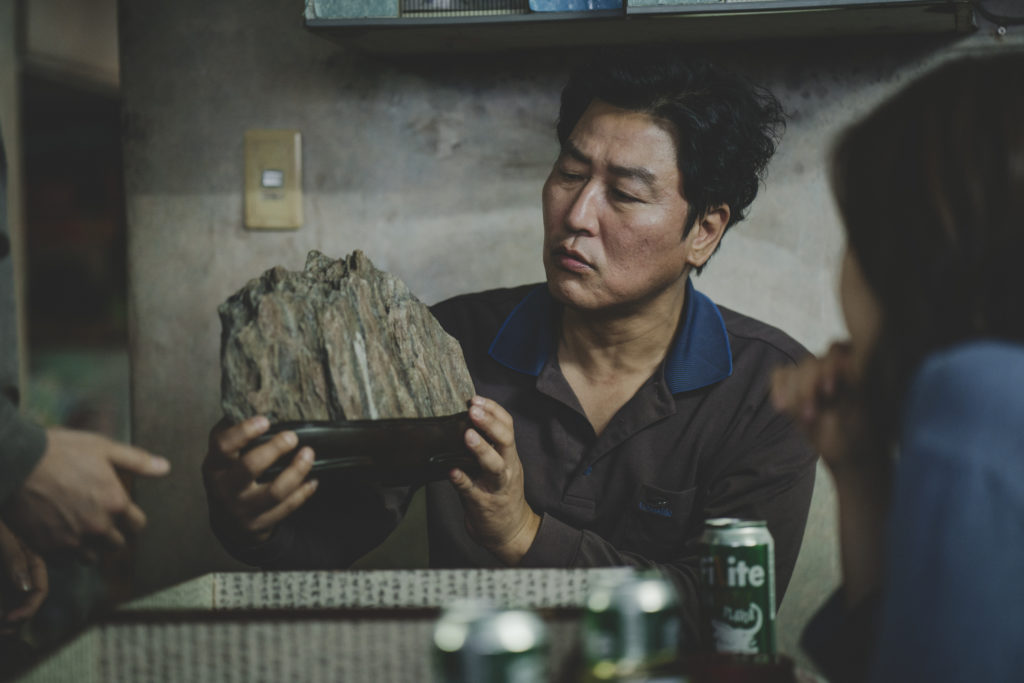 The key plot device which is used to start the main series of events in this feature is a scholar stone. When Ki-woo’s friend, Min, brings this unexpected and weird gift to the Kim family, he says that the rock is supposed to bring material wealth to its owner. Later, it turns out that the rock was just an excuse for Min to visit his friend and offer him a job which Ki-woo is going to gladly accept.

However, this stone is not just a simple plot device, it represents something far more important. The stone symbolizes Ki-woo’s hope and desire to become a member of the high society, something he so desperately wants. Ki-woo views the stone as his entry ticket to the rich and privileged world. The rock also personifies his friend Min, someone who Ki-woo sees as the best version of himself.

Ki-woo clings to the stone even when the flood destroys his home and he carries it with him to the Park house, once again relying on the stone to become an ultimate “solver” of his problems. But in the end, he was almost killed by it. He almost became a victim of his own aspirations.