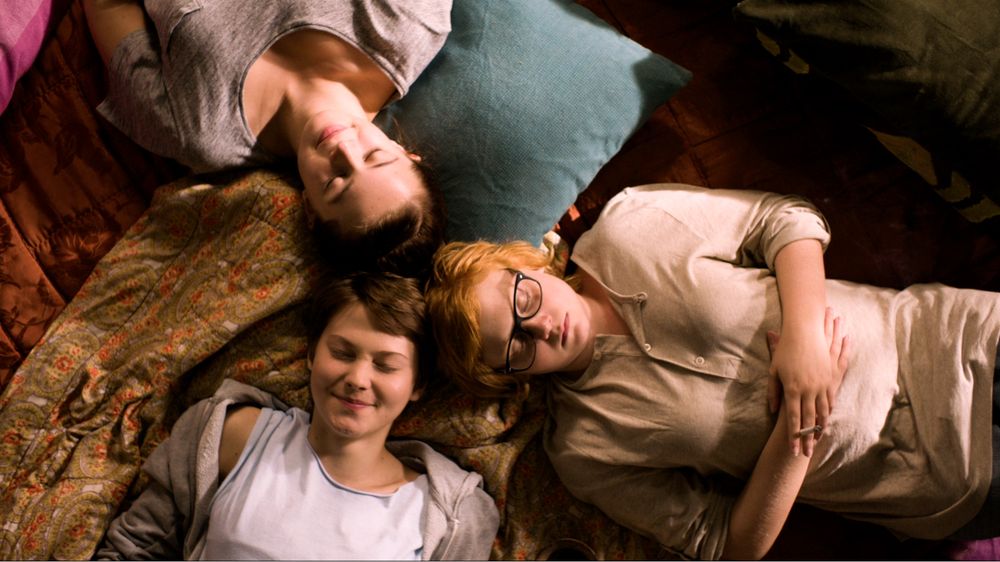 The article you are about to read could be easily retitled as “Travelling Around the World in Search for Dramas”, considering that each of the films hereinafter originates from a different country, co-productions aside. None of them, however, could be classified purely as drama, even when there are no additional terms on their respective IMDb page.

Going from Japan to Kazakhstan, you will most probably find at least one title – obscure, prize winning or both – that will awaken your interest (and give a recommended companion piece – some taken with a grain of salt – a chance). The entries are arranged in chronological order. 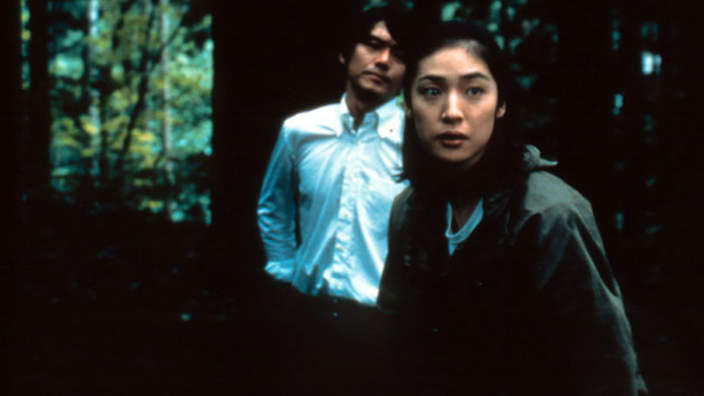 “Dreams are not ‘good’ or ‘bad’. They ooze up through the cracks at the bottom of your heart. They are where your real self comes from.”

A young calligraphy teacher, Akira (Atsuro Watabe, excellent and looking much younger than 33), arrives at a remote village of Omine whose superstitious inhabitants shy away from the modern technology such as television and cell phones, yet they do use computers. There, he meets a spinster, Miki (Yūki Amami, superb), who owns an old-fashioned papermaking shop (something you do not see every day) and falls for her, ignoring the age difference.

As time goes by, she miraculously gets younger (and less reserved), whereas the villagers become increasingly upset by the local legends of Inugami (wild dog) curse which has hanged over the female members of Miki’s Bonomiya family.

Depicting the destructive power of unfounded beliefs (are they really?) against the backdrop of conservative vs. liberal thought, Harada delivers a peculiar, finely nuanced blend of romantic and familial story with incestuous undertones and subtle elements of supernatural thriller rooted in Japanese folklore.

All the while, bits of horror slowly boil under its surface. The clash between the progress and (patriarchal) tradition, the latter of which frequently rears its ugly head, gradually escalates throughout the course of the film and explodes in one of the final sequences (needlessly?) devoid of color. 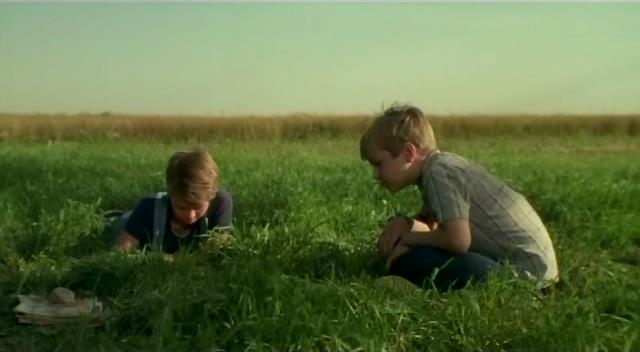 Nicholas is a 12 year old, straight As student who lives with his widowed mother in a remote house surrounded by swaying wheat fields, in Canada of the late 50s. He enjoys dissecting insects in his small shack and has obvious (and serious) hots for his best friend Bobby who is more interested in girls.

After an impulsive kiss, what seemed like an offbeat arthouse drama gets progressively weirder and more unsettling, frequently bordering B-horror which involves ghoulish doppelgängers and a “ventriloquist ghost” of the past.

Utilizing creepy metaphors and making the most of that awkward silence during the conversations, the writer-director Jeff Erbach successfully visualizes Nicholas’s guilt, fears, desires, anxieties and confusion. Helped by the well-rounded performances, especially from the debutants Jeff Sutton and David Turnbull, he creates an insightful psychological study of a boy struggling with the absence of a father figure and dealing with his budding (homo)sexuality.

Given that “The Nature of Nicholas” is his first (and, so far, last) feature-length offering, it is quite an achievement. In addition, his methodical direction blurs the lines between dreams, reality and hallucinations, whereby the titular character’s moody inner world is externalized, leaving the viewer both perplexed and transfixed.

The amalgam of the rural setting, succinct dialogue, Lynchian atmosphere, slow-burning rhythm and wonderful “vintage” aesthetics makes for one of the most bizarre coming of (queer) age films. 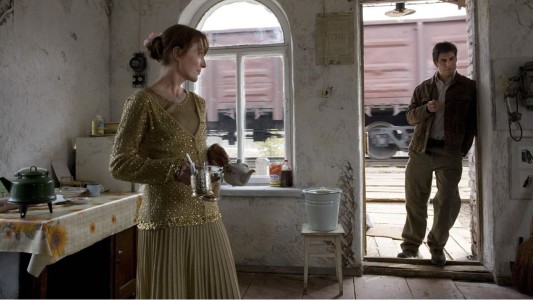 When we first meet a redhead heroine, Natalia (the rusalka-like Kseniya Kutepova), she chases after something towards the camera, throwing her hands in the air. Soon afterwards, we realize it is a red, mouse-head-shaped balloon that she tries to catch and the juxtaposition of it with the dormant, soul-wrenching winter landscape sets the (almost) magical realist tone of Natalia’s tale.

And it is an unorthodox tale of her liberation from the shackles of patriarchy and also about one’s emotional and spiritual awakening leading to self (re)discovery. Her “journey” starts accidentally, with her old dispatcher husband’s death, and continues towards the destination which is yet to be decided along the “road”. Initially, she appears utterly puzzled, lost in the desolate surroundings of thick fog and endless railways, but gradually, her inner light shines through her translucent skin.

Every single act she does, from selling a cow, through buying a mirror, burning old stuff, sleeping with a handsome, entrepreneurial truck driver Sergei (Dmitriy Dyuzhev whom Storzheva enjoys to undress), then pushing him away, and all the way to the fateful boat ride is embedded with symbolic meaning. The same applies to the clothes she wears and to the very setting which radiates warmth, in spite of nature’s bleakness and her shack’s decrepitude. 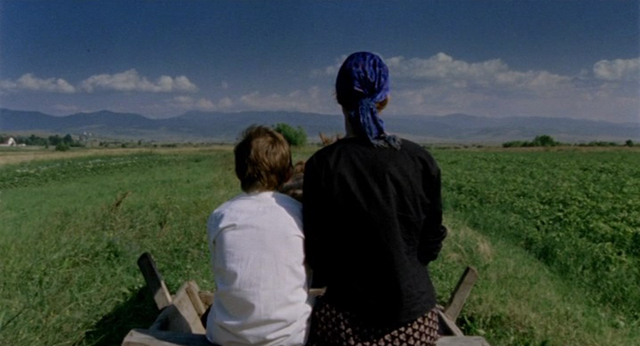 Prior to “Berberian Sound Studio” and “The Duke of Burgundy” which, without any doubt, belong to the pantheon of the most original works of the 21st century cinema, there was “Katalin Varga”. Shot on 16mm, for less than thirty thousand pounds and with no production company behind it, in the Hungarian speaking parts of Transylvania, this is the film which earned the British helmer Peter Strickland a Silver Bear for “Outstanding Artistic Contribution”, as well as international recognition.

Marking a strong debut for its auteur, it is a bleak drama turned unconventional thriller which tells an age-old story of revenge. The titular character (a brilliant first role for Hilda Péter) gets thrown out of the house, after her husband finds out that their son Orbán (Norbert Tankó, displaying maturity beyond his years) is actually not his. Katalin realizes she has to face the demons of her past and, together with her child, sets out to “pay some men a surprise visit”.

It is not hard to connect the dots and see the big picture here, yet the film remains fairly engaging throughout and makes us root for the (anti)heroine who is both a victim and a victimizer. In order to protect Orbán from the painful truth, she blinds him with white lies, as coarse reality forces her to make some hasty decisions. Against the backdrop of her transformation from a wronged woman to a wrongdoer, Strickland explores the gray areas between hatred and forgiveness, parental love and parental mistakes.

Despite the fact that he is a stranger in the Carpathians, the breathtaking vistas of the region are painted with a keen eye (and saturated greens), whereby all the characters feel incredibly authentic. Particularly praiseworthy are the brooding soundscapes and several forest scenes which brim with horror, reflecting Katalin’s fears and foreshadowing the events to come. 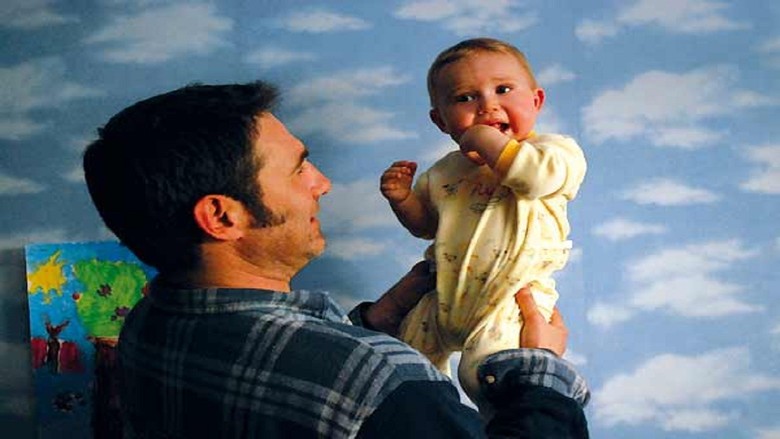 In the prologue, we see a single mom, Katie (Alexandra Lamy), seeking help from a social worker, because the father of her second child left them. What follows is, essentially, one long flashback which leads to the epilogue that is much different from what’s expected. And it’s no wonder, given that you never know what to expect from Ozon’s offering.

An assembly line laborer in a chemical factory, Katie lives modestly, yet harmoniously, together with her seven-year-old daughter Lisa (Mélusine Mayance in an outstanding debut role). At her workplace, she meets a new colleague, Paco (Sergi López), with whom the nuclear family becomes complete.

After nine months, Ricky is born. The boy is healthy and everyone is happy, but once a couple of bruises appear on his back during Paco’s baby sitting “shift”, the problems start to rise. Accused of abuse, Paco leaves, but soon after, the bruises turn into excrescences and the feathers cover the excrescences and Ricky’s first steps are soon replaced by the first flight around the room!

Is the little one for real or is he just a figment of Katie’s imagination – the embodiment of prenatal worries? Does Ozon want to say that children are like birds and shouldn’t be kept in cages? Well, it is not easy to give the right answers to these (and many other) questions, but one thing is for sure, beside Ricky’s cuteness – the commotion caused by the miracle, whether fancied or not, is a fertile ground for the social satire and the exploration of human nature.

The weird, yet accessible combo of dramedy, fantasy and mystery is marked by tight direction, fine performances, unobtrusive music and pretty, down-to-earth cinematography.