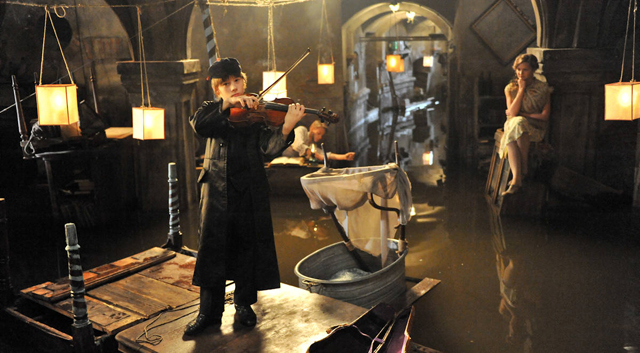 “Venice (originally, Wenecja)” tells a cruel coming of age story set in Poland during the WWII and focused on an 11-yo boy, Marek, who is played by the angel-like, hyper-talented Marcin Walewski. For the security reasons, he lives in his grandmother’s country house which serves as a refuge for the females of the family, whereas his father and older brother are summoned to the front.

Thanks to his parents’ tales, Marek is obsessed by the titular city and constantly dreams of paying it a visit one day. Due to the circumstances, a promised excursion must wait for better times, but he manages to build and escape to his own “origami” Venice in the accidently flooded basement. Alas, the illusions which he and his relatives harbor are dispelled after the Nazis invade the estate…

If you previously watch any of Kolski’s lighter features, such as “The Man Who Read Music from the Plates” or “Jasminum”, you will probably find yourself defenseless against the unrestrainable force of a gloomy, depressive atmosphere established here. Inspired by the motifs from the stories by the Polish writer Włodzimierz Odojewski, “Venice” successfully conveys the protagonist’s fragile, shaken state of mind, rendering his character very believable.

Its mesmerizing cinematography is quite reminiscent of Dorota Kedzierzawska’s harrowing drama “Nothing (Nic)”, which comes to no surprise, as they both share the same DoP, Arthur Reinhart. Dominated by gray, beige and golden-brown, the stunning imagery frequently delves into the realm of magic realism, deepening the poignant, emotionally intense narrative. 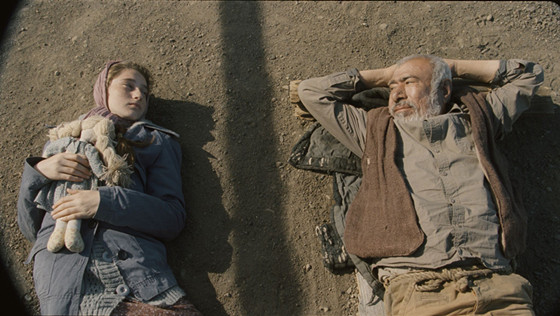 Old man and the river. His granddaughter and a soldier. A story as ancient as time itself, of a man pitted against himself, another men and Mother Nature – generous, whimsical, unforgiving… There is something primordial in George Ovashvili’s “Corn Island (Simindis kundzuli)” which can be best described as an existentialist war drama with a strong faux-anthropological-documentary vibe.

Organic, gorgeously shot and nearly dialogue-free, it is set in no man’s land amidst the water – to be more precise, on a small, fertile island amidst the Enguri River, between Georgia and partially recognized republic of Abkhazia. Idyllic at the beginning, it follows the protagonist leaving and returning over and over again, while bringing tools and supplies for a temporary hut, as well as for growing corn. About ten minutes into the film, the abovementioned girl enters the scene, her head wrapped in a shawl and holding tightly to her doll.

Gradually, her timidity fades and later, we see her openly flirting with a wounded soldier who finds refuge in her grandfather’s cabin. The subplot involving her sexual maturing adds another layer to this quiet, minimalist pastoral which caused some controversies at home, because of the Abkhaz point of view. However, it is nothing short of humane, even touching.

Ovashvili seems to take no sides, pays painstaking attention to details and has great respect for his characters, played by both pros and non-professional actors. The stand-out amongst them is Mariam Buturishvili as the granddaughter who has one of the most eloquent pair of eyes – they speak more than a thousand words. 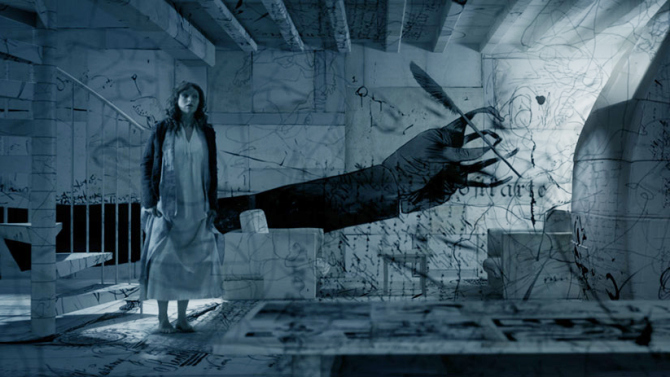 The multidisciplinary artist Dave McKean’s latest directorial effort provides a unique, if not utterly immersive experience. Once again, he lets fantasy intrude reality and merge with it, but this time, he reflects on the themes of (a child) loss, grief and parenthood.

The parents in question are Grant (Ben Daniels) and Christine (Dervla Kirwan) who have fallen out of touch with everyone since the tragic death of their newborn. They are about to spend a cathartic weekend at the remote seaside villa belonging to their art college friend Dean (Michael Maloney) and his much younger girlfriend Freya (MirrorMask’s Stephanie Leonidas) whose name couldn’t be more symbolic (google Freya + Norse mythology).

As all sorts of memories are recalled and some old wounds reopened, Dean’s illustrations come to life and blur the line between the tangible world and the imaginary one which mirrors both couple’s trepidation, wistful yearnings, unrealized dreams and missed opportunities.

By virtue of their illusions, the deceased boy lives as well, in various forms. All the enhancements, whether practical or computer generated, from origami crabs rendered in stop-motion to Christine’s inky night walk of enlightenment, operate in complete harmony with the film’s darkish, elegiac atmosphere.

Developing at unrushed pace, “Luna” is a fine example of a personal, intelligent chamber drama that lulls the viewer into accepting its minor imperfections and dream along with its interesting and superbly portrayed characters. 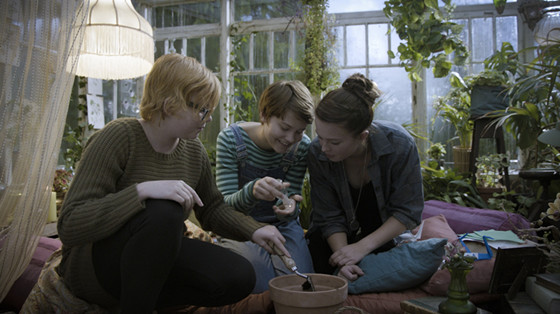 Based on Jessica Schiefauer’s young adult novel “Pojkarna” (which translates as “Boys” and is the feature’s original title), “Girls Lost” injects magical elements into a subtly transgressive coming of (transgender) age drama which shatters the notion of Sweden as liberal model country with enviable quality of life.

The debutants Tuva Jagell, Louise Nyvall and Wilma Holmén give terrific performances as best friends Kim, Momo and Bella, respectively. Bullied by their peers at school, yet happily cocooned at their greenhouse club, these loveable outsiders guide the viewer through the gloomy teenage world of social rejection, adults’ indifference and sexual confusion.

After drinking sap from a strange black flower, the three of them turn into self-confident boys also played by the excellent first-timers Emrik Öhlander, Alexander Gustavsson and Vilgot Ostwald Vesterlund. For Momo and Bella, it is a relief that transformation is only night long, but Kim is a bit disappointed, as she pretty much enjoys being her male self.

And that is when many problems for our girls start to rise. The seemingly unbreakable bonds between them are severely tested and the darker topics, such as drug addiction and suicidal thoughts, are brought to the fore. Keining raises many questions, but offers no easy answers, simply because there are none. Aesthetically, her neatly directed film is as indie as it gets, riding the nostalgia train. 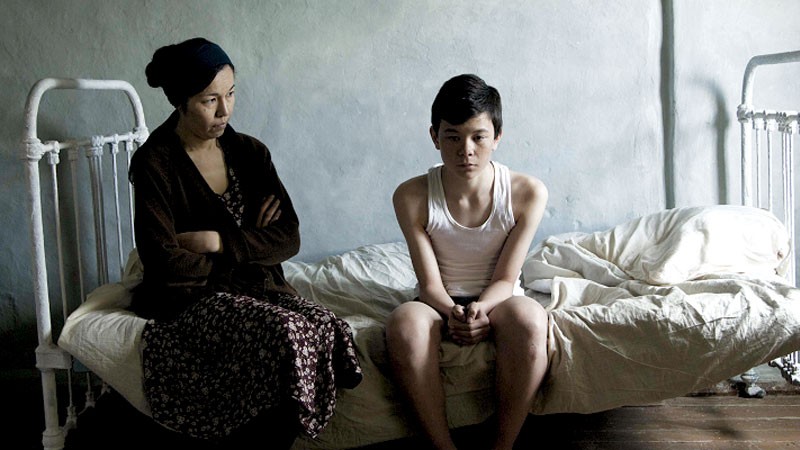 Set in a remote, post-Soviet Kazakh village sometime in the mid 90s, “The Wounded Angel” seems to be a spiritual sequel to Emir Baigazin’s relentlessly harrowing debut feature “Harmony Lessons”. Four loosely connected chapters portray the inconceivably grim childhoods of three pubescent and one adolescent boy against the background of economic decline and electricity restrictions on daily basis as part of government’s measures for the country’s recovery.

The themes of guilt, moral corruption and dysfunctional family are interwoven into the unsparing vignettes of rigorous visual style supported by Bressonian performances from non-professional cast. These chapters wrap up with epigraphs containing the details from the Tampere Cathedral frescoes by the Finnish symbolist Hugo Simberg whose most famous painting is the source of the film’s title, as well as of Baigazin’s inspiration.

“Fate” sees Zharas unknowingly following in the footsteps of his criminal father. Chick’s voice mutation turns him from a promising talent to an extortionist bully during “The Fall”. The third and longest section, “Greed”, revolves around an outcast, Toad, who robs a trio of glue-sniffers acting as the figures from the Simberg’s work in a bleakly humorous live-action “replica”. And, finally, in “Sin”, Aslan spirals into (water drinking) madness after unintentionally impregnating his girlfriend.

Weaving an austerely poetic narrative embedded with sharp social commentary, the up-and-coming Kazakh auteur offers no glimmers of hope for his prematurely grown anti-heroes whose mental and emotional detachment is reflected in the depressing, mostly static, yet brilliantly framed shots of overwhelming decay and desolate steppes. He allows them just a few moments of escapism in a transfixing, subtly surreal epilogue colored by Chick’s rapturous rendition of “Ave Maria”.