Widely recognized for his philosophically inclined adaptation of Masamune Shirō’s manga Ghost in the Shell, Mamoru Oshii is not only one of the most important anime directors out there, but a full-fledged auteur as well.

Even when he is in a prankster mood (Assault Girls) or trying to get the best out of Kazunori Itō’s dull script for Patlabor movies, he does manage to “create worlds different from our own”, some of his trademarks being the Basset Hounds appearing when you least expect them, and the poetic, dialogueless montages permeated by Kenji Kawai’s impeccable score.

This list covers the works directed (and in most cases written) by Oshii which doesn’t mean that Jin-Roh: The Wolf Brigade, Blood: The Last Vampire and Musashi: The Dream of the Last Samurai are not recommended viewings.

Only ten minutes long, Je t’aime is one of the strongest proofs of Mamoru Oshii’s affection for his pet Gabriel whose animated counterpart plays the central role in this post-apocalyptic sci-fi drama. While he roams the empty streets of Tokyo, the sad-eyed and long-eared doggie seeks for someone to play the game of fetch with. But, the only form of life he encounters is the frigid, synthetic one.

Notwithstanding the tight timeframe, open self-referentiality and minimalist narrative of seeking for human warmth and attention, Oshii evokes the viewer’s empathy, assuming the viewer is an animal lover. In hitting the target, he is helped by Tetsuya Nishi’s realistic Basset Hound design, detailed backgrounds and fluid animation by Production I.G.

Every move of the lonely Gabriel seems very true to life, but also attractive and quite unique is the appearance of the horn-propelled gynoid who is not in a mood to play with the adorable four-footer. Unfortunately, Je t’aime suffers the lack of Kawai’s brilliance, since it is created in collaboration with J-pop-rock band Glay, as a music video for their song Satellite of Love whose vocal parts are a bit on the mushy side.

“From this point onward, there is no turning back.”

And it surely is so. As the JAL (Japan Airlines) planes turn into giant “nishikigoi” (Japanese carps), during a blistering hot summer, a private eye who barely meets his ends accepts a bizarre case – the surveillance of an enigmatic middle-aged man and his little snotty-nosed daughter who inhabit an unregistered, ramshackle building in the slum outskirts of some metropolis (Tokyo, perhaps?). The girl is obsessed with the fish, so whenever she notices a “steel bird” in the sky, she starts exclaiming “Sakana (fish)!” and then the aforementioned miraculous transformation occurs.

The second and last episode of a short-lived OVA Twilight Q – anime’s answer to popular TV show The Twilight Zone – justifies its title by facing both the protagonist and the audience with many conundrums. It is not by mere coincidence that the detective is nameless, given that the questions of one’s identity are accompanied by the nightmarish dissolution of reality.

Made only two years after Angel’s Egg, Mystery Case – File 538 can be viewed as another Oshii’s attempt to portray his loss of faith and, simultaneously, the impotence of men. He’s clear about the mischievous brat being the embodiment of God(des), yet he doesn’t offer any answers to why, how and if she exists in a loopy and gloomy psychological (and eschatological?) fantasy.

By virtue of the brooding score and in spite of the comic character design, there’s a certain unease and claustrophobic feel to the proceedings which pay homage to Oshii’s influences, particularly to Chris Marker’s La Jetée. 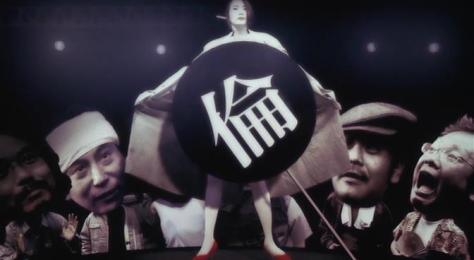 As the English version of its title suggests, Amazing Lives of the Fast Food Grifters (Tachiguishi Retsuden) is positively the weirdest entry on the list. While profiling a bunch of the legendary meal-stealers (who belong to Oshii’s extensive Kerberos saga) in the series of outlandish vignettes, the film overviews Japan’s history in the form of a radical fantasy-mockumentary which happens to be a biting and provocative satire too.

It is best described in the article for Strictly Film School as “alternately baffling in its unclassifiable lunacy, infectious in its inspired creativity, irresistible in its tongue-in-cheek audacity, and admirable in its visionary integrity”. Now, how cool is that?

Shortly after the gloomy prologue which serves as a harrowing reminder of the WWII defeat, we are introduced with the first (anti)hero, Moongaze Ginji, a “wicked” geezer who contemplates on his country’s rich cultural heritage in the wake of the American occupation.

As the nation starts to rise from the ashes during the 50s, emerges a seductive female freeloader who goes by the alias Foxy Croquette O-Gin. Those two are followed by Crying Inumaru, Hamburger Tetsu and Medium Hot Sabu, among the others, who all use diverse strategies – from insatiable appetite to Hindu-impersonation – for outsmarting the hardworking stand-and-eat (tachigui) shop owners.

All of their portraits, as well as the link-sequences are rendered in “superlivemation” – a unique and very stylish technique of 2.5D paper-doll theatre of sorts which was primarily developed for Avalon. By taking the Gilliam-esque mix of photo-montage and cut-out animation to a whole new level, the artists have a whale of a time translating Oshii’s wildly imaginative ideas into noodle-themed antics.

On Japan’s path toward modernization and globalization, there are a few surprises, such as the explosive Coke bottles, a cow talking with a samurai and a hot-dog allusion to Wolverine. Plenty of jokes are probably lost in translation, but that doesn’t matter much, given the outstanding aesthetics. 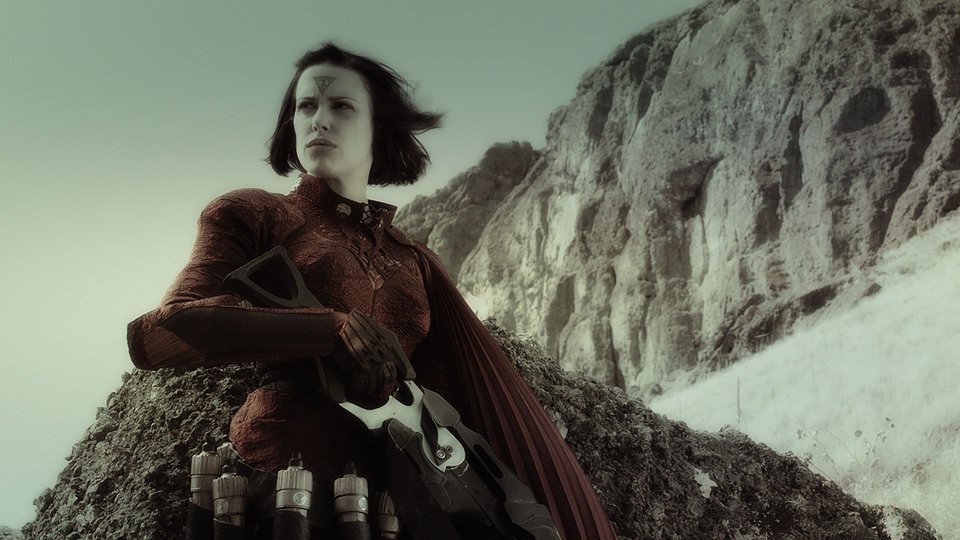 A hybrid, criminally underrated cyberpunk-fantasy Garm Wars: The Last Druid is set in the world of Annwn abandoned by the Creator Danaan a long time ago and devastated by continuous wars between the surviving native tribes. The weakened Kumtak possess the technological knowledge and serve the Briga who control the ground with the cumbersome tanks. They are fighting against the Columba who rule the sky with the powerful fleet of elegant airships.

The sudden appearance of the last druid – the enigmatic being Nascien-666 – brings together the sworn enemies Khara-23 (Mélanie St-Pierre), Skellig-58 (Kevin Durand) and Wydd-256 (Lance Henriksen) on “the road of enlightenment”. The trio is accompanied by a holy animal, Gula, which is, of course, portrayed by a Basset (the adorable female Holly Wood, to be precise).

Numerous clues suggest that the unusual names and esoteric terminology conceal the upgrade of the forbidden military RPG from a Polish-Japanese co-production Avalon. The ostensibly simple story unfolds within the virtual reality which reflects the subconscious mind of some advanced AI who enslaved the most hardcore players.

If this hypothesis is correct, the narrative jumps and pacing irregularities are nothing but minor bugs or the incongruity between human and machine. Hence the manna-injections for reload and the archetypal characters – a skilled and beautiful heroine prone to introspection, a bold, obedient and soft-hearted soldier and an old sage on the quest for Truth.

Trying to find the reasons for continued “existence”, the “thinking” operating system extracts and combines random information from its rich database and builds the strange environment in which the mythological past is subjected to the process of technologization. Paralleling its inner struggle is the protagonists’ preoccupation with solving their personal puzzles.

Revisiting the themes of soul, illusion, identity and high-caliber weaponry, Oshii shows interest for the Celtic culture and places a lot of dolmens and triskelions throughout the film. Once again, he emphasizes the absurdity of war and reminds us that nothing is what it seems at first sight, while deifying his favorite breed – that is why Gula’s touch is nothing short of bliss.

Out of retro CGI and allusions to his previous works, he spins an avant-garde poetry of flamboyant visuals which mimic the looks of a video game, in accordance with the setting. Extravagant action scenes and meditative sequences are complemented by Kenji Kawai’s ethereal compositions which, as usual, add a sublime dimension to Oshii’s celluloid dreams. 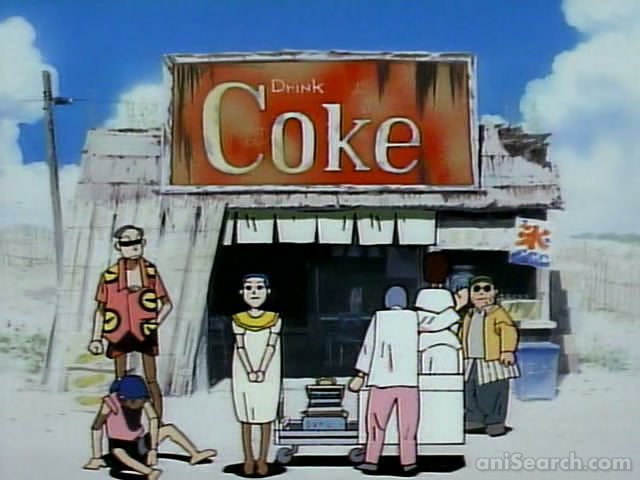 Idiosyncratic and unfairly forgotten, a six-part OVA Gosenzosama Banbanzai! (literally, Long Live the Ancestors!) belongs to the most experimental period in Oshii’s career. Told in the form of a loony play, this farcical tragicomedy revolves around the Yomota family: a teenage boy, Inumaru, his father Kinekuni and his mother Tamiko.

Their normal life starts to collapse after the arrival of a mysterious girl, Maroko, who claims to be Inumaru’s granddaughter from the future. Even though she has a hereditary star-shaped birthmark on her buttock, Tamiko refuses to acknowledge her as Yomota. So, she leaves her husband and son, and hires a private detective, Bannai Tatara, to reveal the true identity of the uninvited guest.

Driven by self-irony and absurd, slapstick humor, a twisted, paradoxical story is directed in the vein of the French New Wave masters, with a short metaphorical mockumentary in which different kinds of birds and humans are compared, at the beginning of each episode.

An otherwise linear narrative rooted in its own logic is deconstructed, as Oshii plays with both the characters’ and the audience’s expectations. However, his anarchic shenanigans are not meaningless and they do follow some rules – no matter how strange it may sound.

Utterly aware of the fact they are nothing but marionettes controlled by a merciless puppeteer, the protagonists still try to manipulate the events in order to turn the situation to their own advantage. Occasionally, they burst into “karaoke soliloquies” under the spotlight – and not only figuratively speaking.

With the most essential props and the minimalist backdrops on one hand and medium-related “deviations” on the other, Gosenzosama Banbanzai! is simultaneously stagey and filmic. Its peculiarity also stems from the unconventional artwork by Satoru Utsunomiya. 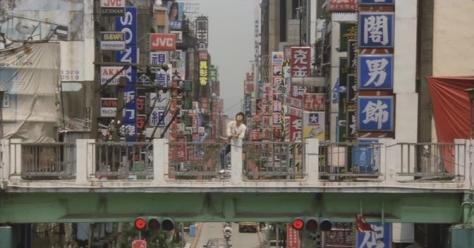 The second theatrical film of Kerberos Saga recounts the events that precede the story of the first one – Red Spectacles (1987) – ranked two spots higher on the list. Stray Dog: Kerberos Panzer Cops (Keruberosu: Jigoku no Banken) begins with the last stand of the Kerberos unit and a chopper escape of an officer, Koichi, witnessed by one of his soldiers, Inui.

After some shooting occurs (which is not uncommon for Oshii-esque intros) and the following title sequence (elegiac B&W montage of real stray dogs) comes to an end, the action moves to Taiwan, three years later. And it almost feels like we are back in our world, until Inui’s surreal break-in to the apartment of Tang Mie – a teenage girl whom the missing Koichi has been involved with.

Together, those two go on a search for the common acquaintance, whereby their road trip, as well as the reunion with Koichi give away Oshii’s uncompromising admiration for La Nouvelle Vague, this time spiced with a pinch of references to Shūji Terayama’s oeuvre. Also noticeable is an almost documentary approach to certain scenes and the penchant for sunsets, long takes, short digressions and sudden slapstick gags.

Shot on locations you rarely see in tourist brochures, such as a remote coastal cottage and narrow slum streets, this allegorical, partly melancholic and partly feel-good dramedy “suffers” from quirky mood swings and tends to be labyrinthine in its poetic depiction of “eternal ambivalence” and the illusion of peace. An atmosphere of a bittersweet summer pervaded by uncertainty is established through the neat cinematography complemented by the acoustic guitar whispering.