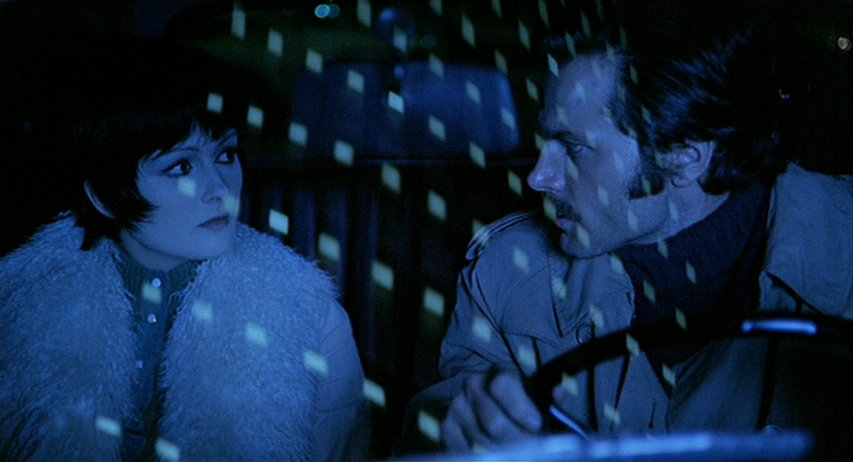 I think everybody knows Franco Nero, even if they don’t realize it. We all know him as the original Django in the self-titled debut, but even more than that we probably remember him playing General Esperanza in Die Hard 2. (Sidebar: there’s a Django sequel in the works, written by John Sayles of Piranha and Alligator fame, in which Django finds himself working on the set of Birth Of A Nation.) He’s a great and iconic actor, and in The Fifth Cord he gets to play my favourite screen archetype: the alcoholic investigator.

This is the second movie on this list in which the mystery is actually worth paying attention to. It twists and turns, has close calls and great red herrings. The set-up, too, feels like it’s right out of a British mystery novel: a black-gloved killer (the giallo staple) kills a young woman, and leaves a glove at the scene that’s missing a thumb. He has four more victims left, and a glove with fewer fingers to leave at each scene. Cool. What follows is bloody, emotional and genuinely enthralling as you watch Nero’s hard-as-hell reporter push his way through not only to the final answer, but to his redemption. This is old-school storytelling at its best.

Which brings me to my next point. For those who don’t know, Arrow Films produces probably the best Blu Rays in the world. They take these cult movies seriously, with meticulous transfers and great bonus features. They even have a boxset with all five Sartana movies and another with every single Gamera movie. Their edition of The Fifth Cord is not only stunning, it has both the Italian and the English versions. If you’re gonna get this one, I’d recommend getting it from them.

And trust me: you have to see The Fifth Cord. 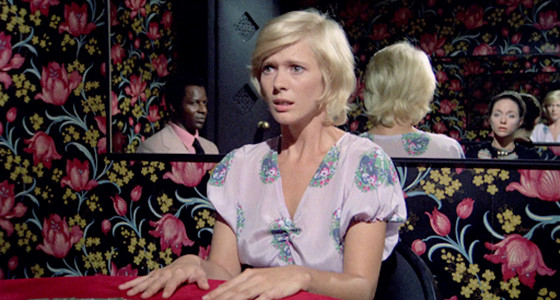 Amazon Prime is a surprisingly great place to go for exploitation films. Their Roger Corman selection is second to none, it’s the only place I know of where you can find Jim Wynorski movies, and they have a good chunk of Jack Hill’s filmography, too. Plus a whole bunch of stuff I’ve never heard of, all of which looks great. Amongst all this, they have a little-known giallo called Perfume Of The Lady In Black, which needs to get way more recognition than it does.

Here’s the most interesting thing about Perfume: for most of its runtime, it’s not a giallo at all. In fact, it seems like it’s gonna be another “mind fuck” movie, until all is revealed, and then the gloves come off and it makes up for lost time, stacking up blood-drenched corpses faster than Normandy. With that in mind, it helps to be patient with this one. It’s not a slog, in fact, it’s consistently intriguing, but if you’re expecting a bloodbath, you either need to wait or go somewhere else. And why would you bother going somewhere else this movie is so damn good?

Interesting fact: the writer/director, Francesco Barilli, also wrote The Man From Deep River, the world’s first cannibal movie. He didn’t do much else, and seems to get no recognition whatsoever, but he’s a top-tier talent who’s been woefully neglected and needs to be recognized for the great work he’s done. 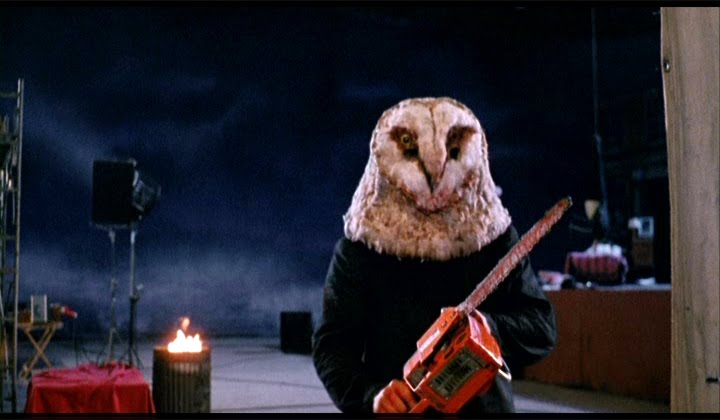 It’s 1987. The slasher craze is in full swing, and video stores and cinemas everywhere carry lurid, gory movies with titles like My Bloody Valentine, Maniac and Bloody Birthday. Parents are losing their minds, critics are having a heart attack every weekend (“I would like to hear them explain to their children and their grandchildren that it’s only a movie,” Roger Ebert said of Silent Night Deadly Night), And amongst all that, an Italian director named Michele Soavi arrived with the coolest, most intelligent, most underrated giallo that absolutely nobody has ever heard of.

The plot is as simple as simple gets. A group of actors are stuck inside a local theatre, while an escaped mental patient wearing an owl mask hunts and kills them. But don’t be fooled: this simplicity is its strength. Soavi is almost Hitchcockian in his ability to manipulate suspense, and doesn’t skimp out on the gore, either. If giallo is your thing, and I’m assuming it is, then you’ll find everything you ever wanted in one of these movies and, without giving anything away, a hell of a lot more.

I couldn’t be more hyperbolic about this movie if I tried. Stagefright is 200 proof straight giallo, and probably the most brilliant movie neither you nor anyone else has ever seen. 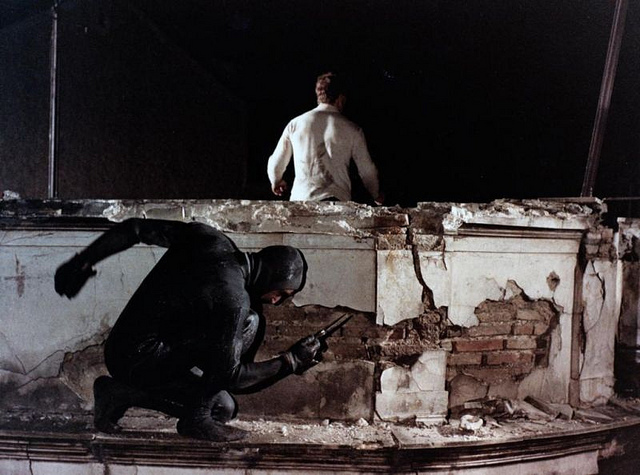 The mystery this time is even more classic than in The Fifth Cord. It revolves around a woman whose husband dies in a plane crash, and whose widow is given a million dollars through his will, although they’d been separated for quite some time. As you can imagine, this rubs some people the wrong way, and she’s murdered. It’s up to an insurance fraud investigator (seriously) and a beautiful reporter to crack the case and find the killer, all while bodies are dropping left, right and centre.

See? It’d almost be Agatha Christie if it wasn’t for the fact that one of the characters gets gutted.

Featuring some of the best writing in any movie of its type, Scorpion’s Tail is what you need if you’re not just a fan of giallo, but of great the kind of great mystery you find in a Jack Reacher novel, except, again, that it’s also nearly 90 minutes of women screaming and getting pulled apart with a knife. Take that, Lee Child. 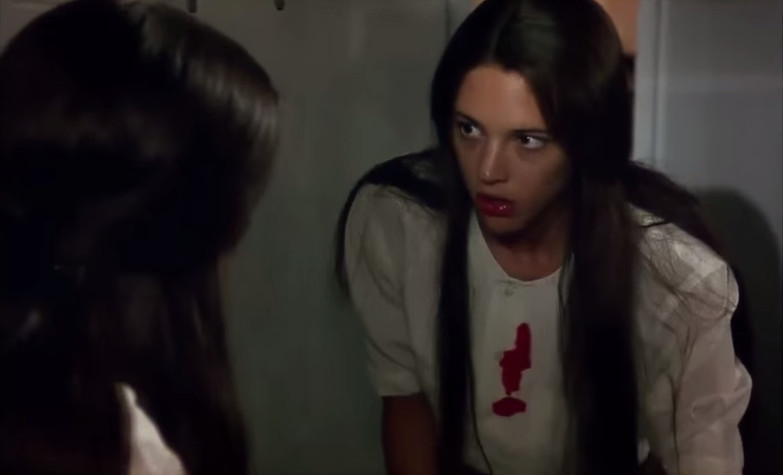 Argento is the big name when it comes to giallo. If you’ve come this far, you’ve probably already heard of The Bird With The Crystal Plumage, Deep Red, Four Flies On Grey Velvet, Tenebre and Phenomenon. (And if you haven’t, consider this your homework assignment.)

Conventional wisdom has it that he hit a career downslide sometime during the 90s, and admittedly Mother Of Tears and Giallo won’t make anyone’s “Best Of” list. But in the midst of this supposed slump, he had a box office hit called Stendhal Syndrome, which is not only worth watching, but ranks as probably the single most brutal film in the great man’s catalogue.

While most giallo movies revolve around serial killing of one stripe or another, Stendhal ups the ante by having, as its villain, a serial rapist, and one who comes back repeatedly to devastate the central character (played by Asia Argento). Basically, this is not your grandmother’s giallo movie. Instead of the classy, black-gloved menaces of yore, with their stabbing implements and cool hats, the violence in Stendhal is absolutely hardcore, with tons of blood, a number of hyper-graphic rape scenes and even some ill-advised CGI showing bullets ripping through faces in slow motion.

In other words, we’ve made it to the final circle of Hell. This is as crazy as it gets, but you’re ready for it. And really, what’s the worst that can happen?