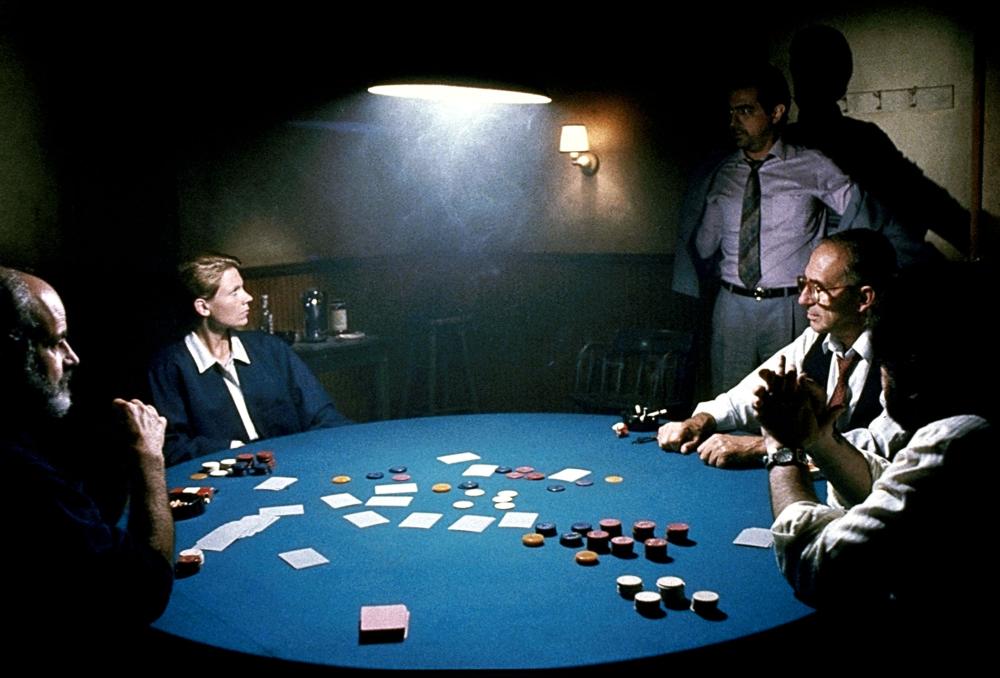 By the time of his debut, Mamet had already won the Pulitzer Prize for the play Glengarry Glen Ross, and written one of the finest scripts of the eighties with The Verdict (1982). Although, many a revered writer has crashed and burned filming their own work. In House of Games, Mamet delivered something more than competence; he created an onscreen world as hermetically sealed and hypnotic as the one he did on stage.

Here, a famous psychiatrist (Lindsey Crouse) develops a fascination with a con artist (Joe Mantegna). She begins following him and his crew on their cons, ostensibly to write a book about confidence games, but she’s clearly there for her own kicks. A long con is obviously underway, but we’re not sure if, or how Crouse is the target, or how much of the love affair with Mantegna is real or merely a ruse. Impeccably plotted and icy-hearted, it’s a timeless picture, mainly for existing so completely in Mamet Land.

His rhythms and repetitions are easily lampooned, but in his hands, they normalize into a style that accentuates both plot details and how each character isn’t just selling something to another, but selling it to themselves. Which is more than appropriate given how much of his work is obsessed with all kinds of deceptions, along with the needs and ambitions that fuel them. Mamet likes to play the Midwest Pragmatist as a persona, but there’s a musicality to this and his other films that doesn’t quite fit that reductive pose. His frill-free framing and stiff, unnatural blocking is its own kind of flourish that works for his own material, and is not merely, How Things Should Be Done. He’s a man who loves the idea of making Fords when he’s only made Ferraris. And this, his debut, certainly didn’t come off an assembly line.

Female filmmakers face a troubling double bind, where the Imposter Syndrome frequently stops them from grabbing the director’s chair early, but should they wait to build their expertise, they find an industry with little interest in giving opportunities to women past their “expiration” date. As an actress, Kent know doubt sensed this, but went ahead and made The Babadook anyway, delivering one of the landmark horror movies of the decade.

The Babadook operates as a dark fable, about a mother (Essie Davis) struggling with her emotionally volatile son (Noah Wiseman), and the title monster that arrives by way of a mysterious children’s book. It’s a stark portrait of how motherhood can isolate a woman, cutting her off from her friends and desires, shrinking her down into someone she no longer recognizes. Kent employs this psychological reality to feed the horror here in the way Polanski made his name doing in Rosemary’s Baby and The Tenant.

Kent’s directing elevates her script, from the stunning opening images of the car crash that left the mother a widow, to her low-key staging of the final moments that feels like the last page of the darkest children’s book ever written. Perhaps most impressive is how deftly she toys with how much of this is the mother’s subjective nightmare and how much is the objective reality of things going south for the family. More than anything, it’s honest about the terrors of motherhood, which women frequently feel too ashamed to discuss and men have little interest in, but that’s why it’s such a dangerous taboo to break, and such a ballsier move than some twentysomething dude reveling in graphic sex and violence.

What can make a late bloomer’s debut so refreshing is they’re old enough to fall out of step with the times. For the last few decades, most Westerns have fallen into two camps: barely competent VOD releases and prestige pictures, with little in between. Gone are the all the oaters that fall somewhere in between, that play weird or upsetting or merely satisfying. And S. Craig Zahler, a professional screenwriter that struggled to break out, debuted with a Western horror flick that’s all three.

Kurt Russell plays a sheriff leading a small group through the desert to rescue townsfolk believed to be kidnapped by cannibalistic cave dwellers. Zahler’s first feature boasts a loaded cast including the likes of Richard Jenkins, Patrick Wilson and Sid Haig, and they’re all fully engaged in this old school riff. Zahler buries the true nature of threat for some time, offering a more traditional Western until unleashing his inner gore hound for the climax, that’s as disturbing a massacre as anything that starts on a dark and stormy night.

A younger director would have been tempted to rush to the showdown, or layer in more standoffs with the cannibals, but Zahler ambles towards that bloody oblivion, lavishing time on the characters to emerge as distinct individuals, without slowing the pace down to feign significance. In this, and his subsequent pictures, Zahler takes the plots of ninety-minute B-movies from the fifties, and expands them into pulp epics, offering Balzac by way of Don Siegel. It doesn’t always work, but it’s a singular vision that’s all the more appealing for feeling like such an anomaly now.

Like Mamet, Alex Garland had made a name for himself as a writer before directing, with acclaimed novels and a pair of screenplays for Danny Boyle pictures (28 Days Later and Sunshine). There was little in his previous work that hinted he’d be as dynamic or sophisticated behind the camera, but Ex-Machina is one of the best sci-fi flicks of the decade, and mostly for its self-awareness that very few younger male auteurs possess.

In Ex-Machina, a young programmer (Domhnall Gleeson) wins a one week stay with his company’s CEO (Oscar Isaac) at the mogul’s modernist country estate. Once there, Gleeson learns he’s there to conduct a Turing test on the CEO’s latest invention, an android woman (Alicia Vikander). It’s the kind of premise that plenty of sci-fi fanboys might have concocted, but they’d all miss the inherent misogyny of the idea, and let it devolve into another dense and humorless killer robot flick.

But here, Garland maintains a smirk to the proceedings, letting Isaac play the CEO as a Mensa douchebag and while Gleeson may be more sensitive, he’s got his own issues. By the end, as Vikander proves quite independent of her programming, we understand that a dude devoted to building his perfect woman is going to build one with some serious flaws. But it’s sumptuously filmed, and Garland understands what special effects he can pull off on his budget, and executes them with a precision most blockbusters don’t muster. It’s exactly the kind of magic trick that so many producers expect from that kid fresh out of film school, when it normally takes years and years to pull that rabbit out of a hat with any skill.

Charles Laughton only directed one film, after an acclaimed career as one of the great actors of the first half of the twentieth century, on stage and in films, winning an Oscar for the title role of The Private Life of Henry VIII in 1933. His only film flopped at the box office, but grew in stature with audiences, and influenced several generations of filmmakers along the way. Like so many of the films here, it was not a product of its time, but of its director, who chose that most doomed of genres, a movie about children that is most certainly not for children.

Robert Mitchum plays a con artist preacher who learns in prison that his cell mate hid all the money from a bank robbery. The cell mate dies without admitting where the loot is, but Mitchum gets out and tracks down the bank robber’s widow (Shelly Winters) and children, charming everyone except the son, who doesn’t trust his preacher’s schtick. It’s a tense Southern Gothic chiller that audiences didn’t know what to do with in 1955.

There’s a fairy tale quality to it, but not in the way so many modern filmmakers cram them into Hero’s Journey templates. This runs like the original draft of a fairy tale, with the odd logic and barely submerged terror. Mitchum knew what a rich role it was, and maximizes his sonorous cool as a weapon here, kicking his malice under the rug until his plan comes to fruition. Laughton never made another movie, but this work lives in the work of so many, from Kasi Lemmon’s Eve’s Bayou to the early work of Guillermo del Toro.

Author Bio: Rob Kotecki is a writer and filmmaker, looking for stories that are buried by fads, prudes and scoundrels. He can be found on Medium and Twitter @arthousepunch.