Midsommar follows the story of Dani and Christian, a couple who decide to travel to Sweden with their friends to attend a festival that only occurs once every ninety years. But once they arrive, events become stranger and stranger and soon they realise that everything is not as it seems within the seemingly idyllic Swedish village.

Midsommar, which is the second feature from director Ari Aster, was released in July. It earned $34 million at the box office against a budget of $9 million. Midsommar was well received critically, garnering much praise for its direction and performances. Yet in spite of receiving praise from critics, Midsommar has proved to be a divisive film amongst audiences.

With horror being one of the most popular genres, there is plenty of competition throughout the year for horror films. 2019 has so far seen the release of dozens of horror films, with films such as Us and The Hole in the Ground in particular garnering critical appraise. 2019 still has many horror film releases to come, with IT Chapter Two and Scary Stories to Tell in the Dark looking to be incredibly popular with audiences. By the end of the year, there may well be a different horror film that merits the accolade of best of the year. But at this point in time, Midsommar is by far the best horror film of the year so far for various reasons.

Early on, we see Christian reluctant to answer his phone when he sees that Dani is calling him and we witness one of his friends urging him to break up with Dani. And it seems as though Christian may be about to break up with Dani when suddenly tragedy strikes, and they stay together. But whilst in some circumstances a tragedy would bring two people closer together, Christian staying with Dani feels more dutiful and perhaps even slightly bitter.

Regardless as to whether we ourselves have experienced this within a romantic relationship, we can all identify with the breakdown of a relationship with someone close to us – when you start to drift apart and conversation doesn’t flow as easily as it once did. There are also very relatable scenes between Dani and Christian’s friends. It is obvious that they know that her and Christian are having issues and that Christian has probably often complained about her.

It is also obvious that her presence is not always welcome in their group and some of them are merely tolerating her hanging out with them rather than actually enjoying her company. Getting on with your partner’s friends can often be a tricky terrain to navigate and Midsommar shows this really well – the uncomfortableness and almost too polite nature of these interactions.

Ari Aster actually wrote the screenplay for Midsommar after experiencing a difficult breakup himself and you can certainly see this in the central conflict between Dani and Christian. He has even described the film as “a breakup movie dressed in the clothes of a folk horror film.”

Basing the film’s central conflict around such an everyday and common issue that many of us have faced or will face makes Midsommar strangely down to earth and relatable. Even amongst the incredibly hard to watch horror that comes later, audiences are able to somehow see themselves in this film. 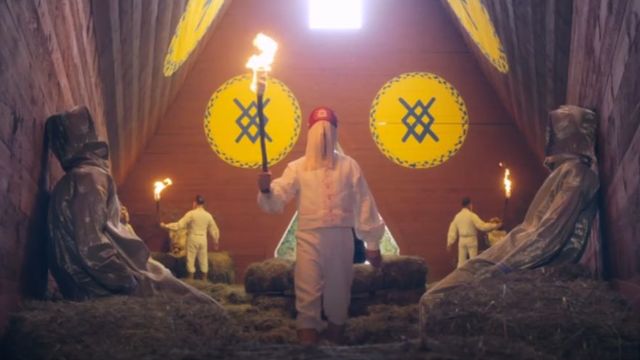 Pick a dozen horror films out to watch at random and straight away you will notice similarities – the settings are quite often night-time, the locations are dark, shady and creepy and it’s not unusual for the weather to be stormy or cold.

Then there is Midsommar. Midsommar’s setting is Sweden in the height of a hot midsummer and the horrors take place, not in the darkness of night or as lightning flashes across the sky, but in broad daylight. In daylight so bright and piercing that often the audience feels like they want to shade their eyes and then go and find a cold drink and some shade to sit in.

As well as its setting, Midsommar is unique in the way that it tries to scare its audience. It doesn’t use ‘traditional’ horror. There are no jump scares or scenes that make you want to cover your eyes and look away – at least not in the sense of being too frightened to watch. Instead the horror makes you want to cover your eyes because it is bloody and graphic, and it is almost too hard to conceive what you are seeing.

In modern cinema, horror films are often formulaic or the latest instalment in a franchise. In that way, audiences usually have a pretty good idea of what to expect and what type of scares to expect and this is why a film like Midsommar is so great – because the audience is left to watch intently to see how the film plays out with no preconceived ideas.

3. It showcases an exciting new filmmaker

Midsommar marks the second feature for filmmaker Ari Aster, whose directorial feature debut was last year’s Hereditary. Hereditary, which was also divisive in its own way, was met with praise from critics too. Both films were firmly in the horror genre and yet both films felt original and brought something new to the genre for audiences.

With this in mind, it marks Aster as a really exciting new filmmaker. Not only as a horror filmmaker but as an exciting new director whose next film audiences will no doubt eagerly anticipate or at least be curious to see what he comes up with next.

Aster became obsessed with horror films as a child, frequently renting them from his local video store and has talked about how he watched every horror film he could get his hands on. This passion for horror certainly shines through in his films and whilst Hereditary was an impressive debut, Midsommar definitely takes his filmmaking to the next level.

Midsommar, as with Hereditary, was written and directed by Aster and features cinematography from Aster’s long-term collaborator Pawel Pogorzelski. Midsommar is well written, as discussed previously Aster has put together a script that audiences are able to relate to and it is well directed. Midsommar is also elevated by incredible cinematography from Pogorzelski – in one scene, the camera follows a car along a long, vast road on the bottom of the screen until it eventually flips the entire scene on its head so that the car is now travelling on the top of the screen.

Interestingly, Aster has since mentioned that his next project may either be a “zonky nightmare comedy” or “a big, sickly domestic melodrama” which would take him away from the horror genre. Either way, Aster’s next film will be a film that audiences want to see and experience.