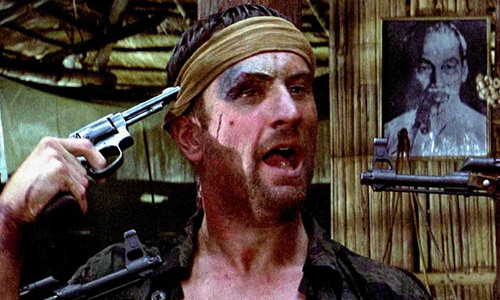 You wait an entire hour for Michael Cimino’s Vietnam war opus to kick off. You witness a wedding, and a hunting trip. Cool. You want it to go faster, because it might be taking a little too long. Finally, it kicks in, and you immediately want to go back in time. When The Deer Hunter goes heavy, it does not hold back. Right away, bodies are everywhere, our characters are prisoners of war, and Russian roulette is the only way to escape (through death, as intended).

The Deer Hunter exploits our patience so damn well, we go from being tired of waiting, to wanting more time to work with. Not many films utilize a patron’s viewing time as well as this one. At the end of the day, that first hour isn’t so long after all.

It is difficult to pick one Alfred Hitchcock work, especially since the late master of suspense truly could create tension in any single way. Do you go the dread route, with Psycho? Do you focus on mental collapses like Vertigo? What about constraints like Rear Window? Today, we’re highlight North by Northwest, which cleverly toys with dramatic irony enough to make your head spin.

A wrongfully tagged executive (pegged to be a secret agent) feels the weight of the world on him as he is continuously chased in a myriad of ways. The more we find out, the more information Roger Thornhill knows that we do. The film is a bit lighter in tone, perhaps to make you cope with the amount of stress that truly goes on here. One door closes, but many more open each time, down to the bitter end.

I try to push this thriller as often as possible, because it really is underappreciated. Terence Young’s limited film Wait Until Dark uses its minimal settings, and small cast to its advantage by upping its content.

A recently blinded woman (Susy) tries to adapt to her new life, as her husband goes to work. She has no idea she has been wrapped up in a drug exchange, and these criminals begin to trick her in order to find out where she has hidden the drugs (which, again, she has no idea she has). Luckily, Susy is much smarter than she leads on, and she (along with the film) begin to utilize darkness to her advantage.

The climax is literally in pitch black darkness, and at that point we’ve turned down Hitchcock and Christie territory, where death clearly can be an option. Wait Until Dark truly isn’t discussed enough when it comes to the greatest thrillers of all time.

Ridley Scott’s first Alien film is a lingering work that crawls forward. You get sucked into an amazing world (thanks to incredible production values). Finally, an interstellar mission goes haywire, thanks to an unexpected guest on the way home. Suddenly, a few hidden plots are unveiled, but at that point, it’s too late. This is a space murder mystery, but the killer isn’t hidden (clearly, it’s the xenomorph).

Instead, the mystery is surrounding the biggest questions: who will make it out alive? Will anyone make it out alive? The answer is a bit obvious now, thanks to a plethora of sequels throughout the decades. However, the trip to the end is still stress inducing, thanks to blaring sirens, shrouds of darkness, and bloodshed at every corner.

There might not be a more stressful film than Elem Klimov’s soviet war thriller Come and See. The fact that the film plays with aesthetics to bring you into its world (sounds disappear when bombs go off, as if your hearing has gone, for instance) makes you a part of the danger. This is hardly an action film, either, but a war film that is invested in personal tragedy more than anything. The loss that Florya goes through is unimaginable (outside of you having to witness him experiencing it first hand, of course).

Nothing in Come and See is easy, and anyone can die at any second. We reach the end, and are left with a master case of cross cutting (one of the finest examples in film history). This scene in question is a broken mind’s attempt to rectify all of the pain that the hatred instilled by Adolf Hitler had spawned. Even this moment is simply stomach churning to experience, on the basis that you don’t know how to feel about it.