It is no secret that cinema has borrowed a lot from literature in regards to storytelling. With the written word bearing the advantage of maturation over millennia, it makes perfect sense that films would adapt elements from it and enhance them with the new capabilities offered by the medium. One such element is foreshadowing; a device used by authors to give hints on the story’s conclusion in advance.

In cinematic terms, foreshadowing can take the form of dialogue, anecdotes, visual or even acoustic cues. This technique can add prophetic tones to a scene or even masquerade as a trivial piece of information, whose significance can only be understood until after the fact. The latter case has occasionally been crafted in such elegant ways that it takes audiences repeated viewings to fully comprehend the obvious reveal subtly hiding in plain sight.

Let’s take a look at 10 films that managed to cleverly reveal their twists early on. The twists themselves are discussed in the article, so a spoiler alert is in place. 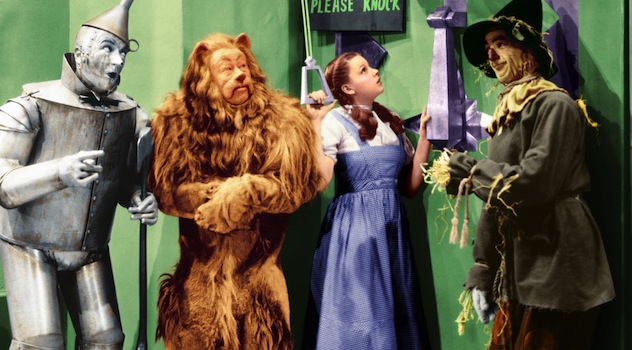 Unlike many of the films on this list, The Wizard of Oz actively tries to make you understand it is a tale about morality and growing up. The classic film was not shy about foreshadowing its major plot points to accentuate its deeper meaning. Even though today everyone knows what the film is about, the same can’t be said about the first audiences that were introduced to this heartwarming masterpiece.

Before Dorothy is transported to the magical land of Oz, we get very clear indications that the story is taking place in her head. Her shortcomings become the main protagonists’ wishes. “Dorothy, you ain’t using your head. You’d think you didn’t have any brains”, she is told in the beginning of the film. When she is scared of her neighbor, Zeke tells her “She is nothing to be afraid of. Have a little courage”, before auntie Em points out that she is always imagining things.

It therefore becomes clear that the creators are trying to let everyone know that the story is not a fantastical one, but a girl’s struggle to mature in order to cope with the world around her. Thus, it comes as no surprise that not only the titular character is not a real wizard, but that this was made perfectly clear while we were still following Dorothy around Kansas.

When she runs away from home, Dorothy encounters Professor Marvel (portrayed by Frank Morgan much like the Wizard of Oz). Marvel is revealed to be a fraud but a kindhearted person who is trying to help her get back home. If that sounds familiar, it is because the supposed wizard assumes the very same role in Dorothy’s fantasy and helps her overcome her fears.

Franklin J. Schaffner may have won both critical acclaim and an academy award for his work in Patton, but two years earlier he had gone on to create a film that would become a cult classic and spawn a number of films, television series and video games in Planet of the Apes. The story follows an exploration crew on faraway planet, in which apes are the dominant species instead of humans.

The iconic reveal comes in the very final scene, with George Taylor on his knees cursing at the human race in front of a half-buried Statue of Liberty. The story takes the theory of Darwinian evolution in reverse, positing that after Earth’s destruction, apes gained the ability to talk and reached what could be compared to the medieval age of human history.

The hint that the crew might have in fact landed on Earth comes before the crew ever sets foot on the planet. During the first scene, in which Taylor is transmitting a message back to his home planet, he prophetically says “The men who sent us on this journey are long since dead and gone. You who are reading me now are a different breed.”

That glimpse of clarity from Taylor is the only one present in the film, as he later assumes the role of the one trying to convince audiences that this is a different planet we are on. After the three survivors crash on the planet’s surface, Taylor is adamant about the approximate location of their whereabouts while Landon and Dodge seem to disagree on every turn. They ask for proof of Taylor’s surety, but he keeps on dismissing them.

Being the leader of the expedition makes him an authority figure and when that fails, he uses mind games to stop Landon from theorizing on the matter. In a very fortunate turn of events for the film’s twist, Taylor is the only one who survives the apes’ initial attack and we are left wondering how smaller Lady Liberty’s impact would have been, had we had a couple of more flexible minds guide us through the events.

Christopher Nolan is no stranger to deception. Most of his films try to incorporate an element of mystery and keep viewers guessing about the final outcome. None does this better than The Prestige, a film about two stage magicians attempting to outwit each other. Much like in actual magic tricks, you would be easily able to figure it out, had you been paying close attention and did not get distracted by sleight of hand.

One of the film’s great mysteries is the quest to discover Borden’s Transporting Man trick. The final explanation comes in the form of Borden’s twin brother. Two people alternating in living the same life, in order to pull off the ultimate magic trick.

As shocking as this may sound, we are shown a similar example in one of the first magic shows we are introduced to. Borden immediately understands the “Chinaman’s” goldfish bowl trick, by recognizing that he has been pretending to be a cripple for years, in order to conceal a bowl between his legs during the show. He calls this a complete devotion to his art and it seems to have inspired him to create the Transporting Man.

Another major sign comes moments later, during another show; a magician makes a bird disappear and a boy starts crying, claiming that the magician killed it. When the bird is brought back, Borden tries to cheer the child up, but his reply perfectly sums up the film’s plot.

Still sobering, the child asks Borden “Where is his brother?”. The clues become less subtle as the film goes on, and it is not hard to deduce the conclusion, but these two major hints come before we are even shown what the Transporting Man actually is, and they are easy to miss when you first watch the film. Perhaps this is because, as we are told in the introduction, “You don’t really want to know. You want to be fooled.”

The 90s were a simpler time; you could use the phone or the internet but not both at the same time, walking a loved one to the airport gates was still a thing, smoking in restaurants was no big deal and M. Night Shyamalan was set for an illustrious career in Hollywood as the next big thing after the incredibly successful Sixth Sense.

Having one of the most well-known twists in cinema history, the film follows the story of Dr. Crowe, a child psychologist trying to help a young troubled kid named Cole. Around the midpoint, we get the big setup for the film’s reveal; Cole can see and talk to dead people. Back then nobody saw it coming, but Dr. Crowe was in fact one of them.

Though it is understandable to miss the signs pointing to this, the film uses a clever way to reveal this from very early on and throughout its run time. Although we see Dr. Crowe around people and even talking to them, nobody but Cole ever answers back.

The culmination of this trick comes during the restaurant scene between Dr. Crowe and his wife Anna. Although he tries to apologize for being late, she never even looks at him, let alone respond. To make matters worse, the doctor never touches an object in front of anyone other than Cole, the only one in the film who can actually see him.

The film ingeniously covers its tracks by laying out the false assumption of a turbulent marriage or by beginning scenes at such a point when the audience can infer that a conversation had just concluded. Using these techniques, Shyamalan manages to pool a wool over our eyes and protect his twist until the very end.

Quentin Tarantino’s first masterpiece is a caper noir centered around 7 criminals after a heist gone wrong. During the course of the film, audiences learn that one of them is an undercover policeman and the mystery of discovering his identity begins. Upon revisiting the film, one might notice a subtle hint indicating who that is from the very first scene.

Before the heist takes place, the group is gathered in a diner to have breakfast. Joe pays for everyone and asks them to leave the tip before he walks away from the table. What ensues is a discussion on gratuity that serves both as introduction to the characters, as well as commentary on contemporary society. Mr Pink refuses to tip, explaining he is against the concept, while the rest engage with him on the matter. It is not until Joe’s return that we are presented with the most interesting piece of information about the characters.

Joe notices that someone did not leave his share of the tip and asks who it was. Without hesitation, Mr Orange is quick to tattle on Mr Pink and even answer a corollary question that isn’t even addressed to him. This is the antithesis of how most criminals would behave, with transgressors usually punished for ratting on others.

Given the minor importance of the incident and the quick resolution that follows, we are not left to ponder on it for long, but Tarantino managed to create an opening scene that made perfect sense for his characters, even if it slipped by viewers the first time around.