A twist ending can make or break a film; get it wrong and you will leave the audience feeling cheated and angered at the twist. But if you get it right, then you could easily save an otherwise below average film and turn it into something worth remembering and rewatching.

Creating a good twist is hard, because it has to make perfect sense in retrospect and enhance the rest of the film in some way. It also has to catch the audience by surprise, but it can’t be so out of left field that it feels more like a cheap shock tactic.

It has to be set up throughout the entire film, but not in a way that it becomes so obvious that the audience can predict it an hour before it happens.

It can sometimes be fun for the audience to guess the twist because it makes them feel smart, and might lead to them enjoying the film even more because they begin to see the story in the way that was intended for their second viewing.

But more often than not, an obvious twist is the result of lazy writing and only ends up making the film boring, as you’re only sitting there waiting for it to confirm something that you already know.

It’s a delicate balance between being predictable enough that it makes too much sense in retrospect, while going completely under the radar upon a first viewing, and when a film gets this balance perfectly right, it can be an insanely awesome experience.

The following 10 films range from pretty good to meh, but the one thing they all have in common is that they pull off that delicate balance and end up saving themselves from being forgotten.

The original “Planet of the Apes” is alright; it’s an interesting sci-fi satire that’s competently made and enjoyable, but is nowhere near the masterpiece it’s been hyped up as for five decades.

But its oversized legacy is perfectly understandable, because the twist ending is easily one of the greatest endings ever seen on film. It’s an ending that has become legendary for a reason, and for 50 years has lifted up the rest of the film with it, even though the preceding 108 minutes are nowhere near as good as its final scene.

It’s also an ending that everyone knows about; there are probably very few people on this planet who don’t know of the twist or who haven’t seen the iconic image of Charlton Heston in front of the Statue of Liberty, and about 40 to 50 percent of these people probably haven’t even seen the film and only know about it through pop culture references.

Which means that it has undeniably lost some of its shock value, as most people watch the film already knowing the twist (kind of like what’s happened with “The Sixth Sense”) and are pretty much just watching it to see how it goes from point A to point B.

But even though the twist has pretty much been spoiled for everyone, it’s still a great ending and is pretty much the sole reason the film is considered a must-see classic masterpiece by everyone and their grandmother. 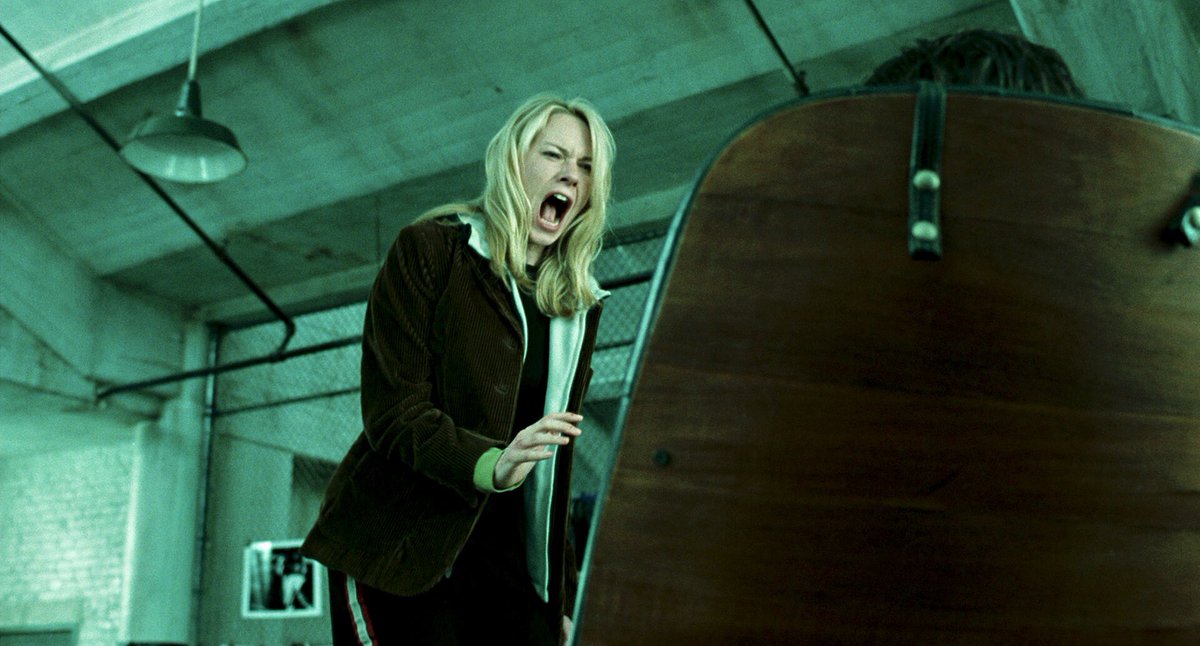 The remake of Japan’s “The Ring” sparked a flood of terrible remakes of Japanese horror films; the original films were of varying quality, but aside for three films, the remakes were all complete shit.

“The Ring” is one of the good ones (the other two being “The Grudge” and “Dark Water”) and is still probably the best film to come out of the mid-2000’s J-horror remake craze, which doesn’t say much for the rest of them as “The Ring” is only okay.

It tells the story of a mother who goes on a journey to find the story behind a haunted VHS tape, whose spirit kills you seven days after you watch it. It’s an interesting and engaging story that never becomes as thrilling, chilling, or creepy as it could have been, until the twist arrives.

After discovering the complex traumatic backstory of the spirit inside the tape, that she was a girl named Samara who was abused by her adoptive family and ultimately murdered, the mother decides to help her by finding her earthly remains and giving her a proper burial, hoping that this will stop her from killing more people.

But when she tells her son about what she has done, he answers her, saying that she wasn’t supposed to help Samara, because now that she has been set free, she can finally reach her full strength and go even further with her killings than ever before.

It’s a chillingly disturbing scene that completely recontextualizes the rest of the story as Samara has been manipulating the mother from the beginning, and everything that has happened has been part of her escape plan.

It’s the first and the only genuinely creepy scene in the film, and it makes everything that came before it more interesting and gives the final moments the energy they needed.

The twist gives the film a deeper retroactive creepiness that makes everything appear even better when you look back at it.

The original “Friday the 13th” has become a bit of a classic, and started one of the longest and most popular horror franchises in the history of cinema. However, as a film it’s quite flawed, and it’s actually quite surprising that it spawned so many sequels.

There is a good slasher film hiding somewhere inside “Friday the 13th,” but it’s just way too long and meandering to actually work. Most of the film is just the audience watching a bunch of forgettable characters walk around an old summer camp doing stuff, and then an unseen serial killer slowly starts to kill them off one by one in a line of overlong, dull, and repetitive sequences.

The kills themselves are actually pretty impressive and still hold up, but the sequences surrounding them are just so boring that it becomes almost impossible to rewatch it and still get anything out of it.

Until the twist ending comes around, where it’s revealed that the serial killer has been an old lady all along (Jason’s mother, to be precise). We learn about her tragic backstory and the reason she murdered the main characters, and it’s actually really interesting, kind of compelling, and it catches you completely off guard.

Then we get a pretty awesome but overlong chase scene full of Betsy Palmer’s gloriously hammy overacting, and a decapitation scene that’s all kinds of amazing.

Had the film been about 15 to 20 minutes shorter, it might have actually been a highly entertaining slasher film with one of the most surprising slasher villains ever, but as it stands, it’s an overlong and boring film that’s worth watching once or twice for the twist and the kills. 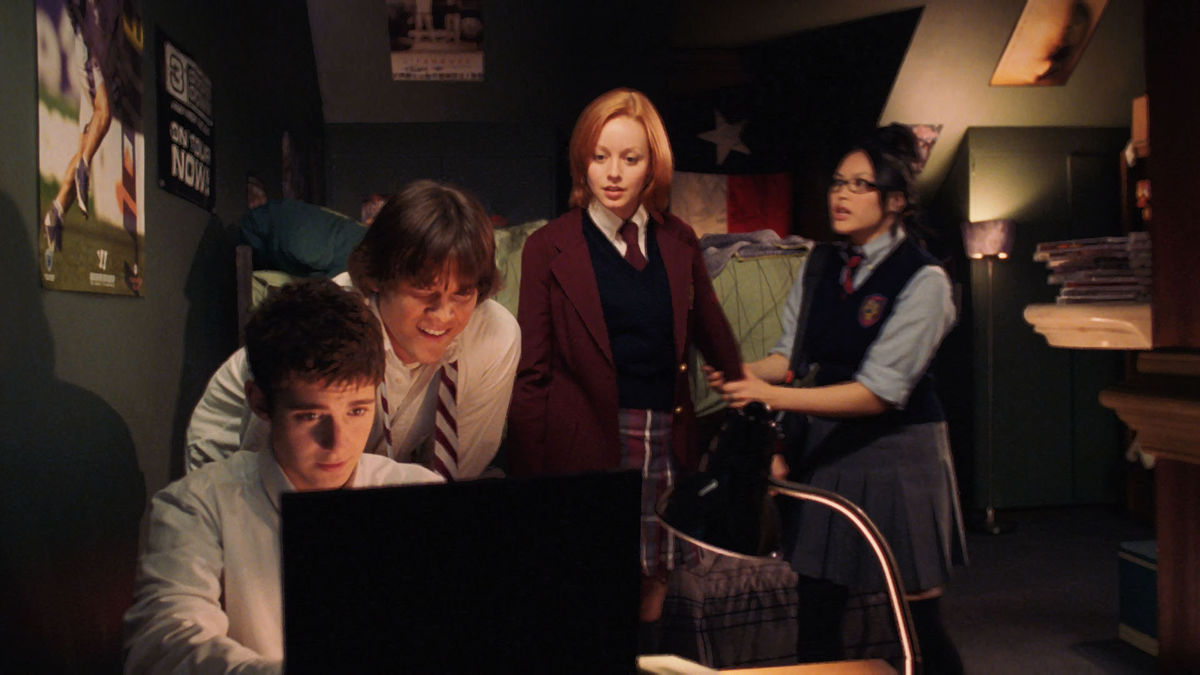 “Cry Wolf” is an entertaining slasher film from the mid-2000s. It’s nothing great, but it’s competently made and will bring some enjoyment to slasher fans looking for something to kill time on a Sunday afternoon.

Our main character Owen has recently gotten into an academy and gets involved with a gang that plays a game called Cry Wolf. They then spread a rumor about a serial killer being on the loose after a girl is found murdered in the woods near the school, but everything goes to hell when an actual serial killer that perfectly matches the rumored killer shows up and starts to kill everyone in the gang.

In the end, it is revealed that it was all a prank that the gang had pulled on Owen and that he was the only one who wasn’t in on it. But at this point, Owen had killed a teacher who he believed to be the serial killer and is subsequently arrested, which is a pretty good twist on the horror formula.

Owen then tells her that he’ll tell the police about this, but Dodger then tells him that the police would never believe him because he has no proof and because the entire situation is so far-fetched that the truth will look like a bunch of lies. Which is a great fucking twist.

It’s by no means an awful film – it’s well made and actually quite fun and has some pretty awesome action sequences – but it’s just one of the most formulaic and predictable films made in recent memory.

So when it takes a complete U-turn in its final minutes and decides to go for a dark, nihilistic ending, it catches you completely off guard, and it’s actually pretty awesome.