When it comes to horror films, it seems like Stephen King has some good taste and if you are to scroll through his Twitter feed (but don’t worry, we already did it for you) you will find out some really good movie recommendations. That of course if you don’t consider the times he talks about horror movies adapted from his own work. It seems like King has something good to say about all of the movies based on his novels as long as they are not Kubrick’s “The Shining”.

Back in 1981, King even wrote a non-fiction book called “Danse Macabre” where he talks among other things about some of his favorite horror films released between the 1950’s and the 1980’s. You can come across some great movie recommendations in that book too, but we won’t list those here – you can already find them all over the internet. On this list, we selected some more recent horror films which the King of Horror has personally recommended via his Twitter account and which we think are worth your attention. 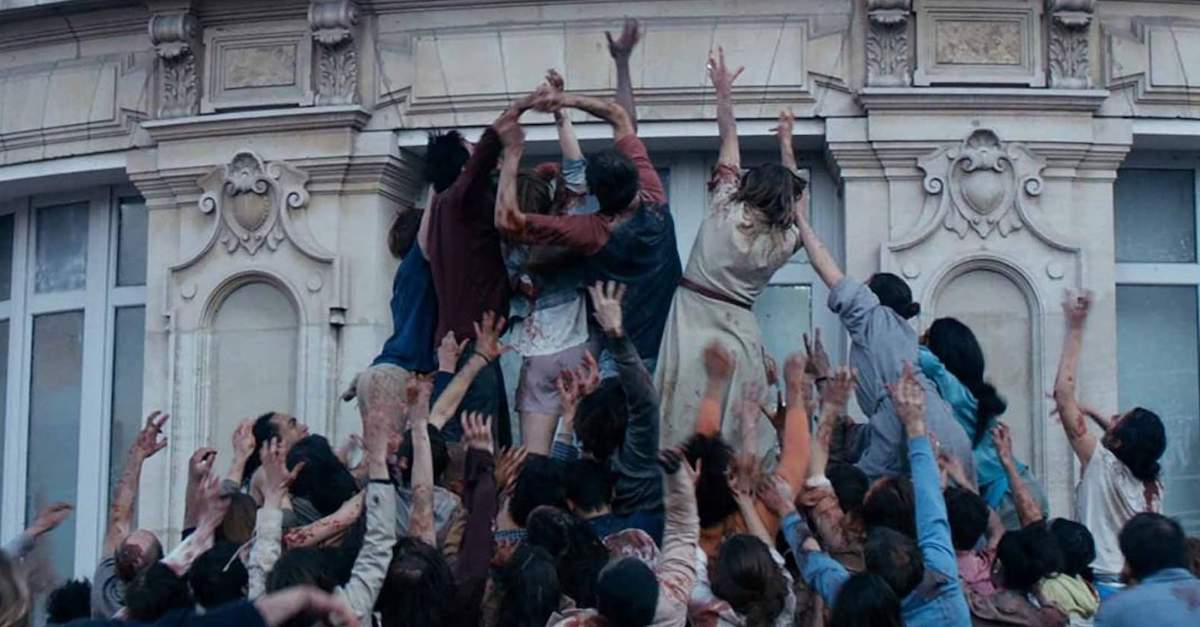 What Stephen King said about it: “Just when you think the zombie genre has been squeezed dry, along comes a perfectly amazing film by Dominique Rocher called THE NIGHT EATS THE WORLD. It will blow your mind.”

It is not so easy to make a zombie film that doesn’t seem like something you’ve seen before. However, over the last few years, a couple of zombie films such as “Train to Busan” or “The Battery” seemed to revitalize George A. Romero’s favorite genre. “The Night Eats the World” is yet another zombie film that manages to be a little different than you’d expect.

Sam (Anders Danielsen Lie), a young musician living in Paris, comes to his ex-girlfriend’s apartment party in order to retrieve some of his tapes. After an incident, Sam passes out without anyone noticing. The next morning, he finds himself in a different world. Most of the people – including his ex-girlfriend and her guests – have turned into zombies and he is the sole survivor in the building.

What was great about “The Night Eats The World” is how it ditched the whole action element of the zombie genre (there are little to no zombie killings taking place in the whole film) and instead focuses on the main character – who is the only character for most of the film – and on his desperation caused by loneliness.

This film is far from a masterpiece, but it is much better than you’d expect it to be. It has a strong lead performance, some unexpected twists and scenes including a bunch of musical numbers that you’d not expect to see in this kind of film but that work surprisingly well, and is overall a lot of fun for a zombie film where there aren’t many zombie killings going on.

What Stephen King said about it: “Loved CAM, on Netflix. Great lead performance by Madeline Brewer.”

“Cam” is a pretty decent entry in the series of thriller/horror movies that revolve around today’s technology. The film follows Alice (Madeline Brewer), a webcam girl who discovers that her account has been stolen by an exact replica of herself. Perplexed, Alice tries to regain control of her online identity and to find out who is behind the mysterious happening.

“Cam” works out like an extended episode of “Black Mirror” and is much better than you would expect from its premise. Its tight and suspenseful plot, creepy atmosphere and its impressive lead performance make it one of the best modern techno-horrors we’ve seen.

What Stephen King said about it: “TRAIN TO BUSAN: Holy shit, it’s like John Woo meets the zombie apocalypse. This makes THE WALKING DEAD look tame.”

The protagonist of “Train To Busan”, the workaholic Seok-woo, is traveling to Busan with his young daughter who wants to see her mom on her birthday. As the title suggests, this is a film that mostly takes place on a train, but this is probably the worst train ride to be embarked on, for a virus is spreading throughout the passengers and they are quickly turning into vicious, fast and very aggressive zombies. Seok-woo has to struggle for his and his daughter’s survival and to find a way to reach a safe place in the zombie-infested South Korea, but his task is nearly hopeless.

Stephen King said it really well: the zombies from “Train To Busan” really make the ones in “The Walking Dead” look tame. These are not the George A. Romero creepy, slow-moving type of zombies. They are fast and nearly impossible to escape from and the fact that the survivors are stuck in the confined space of the train makes it even harder for them to defeat the undead.

This makes “Train To Busan” one of the wildest, craziest and most entertaining zombies films you will ever see. From beginning to end, you won’t find time to catch your breath, for Yeon Sang-ho’s film is as thrilling as it gets.

What Stephen King said about it: “The Witch scared the hell out of me. And it’s a real movie, tense and thought-provoking as well as visceral.”

Robert Eggers’s “The Witch” follows a Puritan family in the 1630’s New England which is unsettled by an unknown evil lurking in the dark woods surrounding their recluse farm. As their animals start to act strange, their crops fail and one of the children is seemingly possessed by an unseen entity, the paranoid family members accuse Tomasin, the teenager daughter, of being a witch.

The historical setting, complex themes of religion, fanaticism and female suppression, the unsettling, dreamlike atmosphere and the lack of horror clichés set “The Witch” apart from all the other horror films you’ve seen. There are no jumpscares or buckets of blood, yet this is still one of the most captivating and creepy horror films of this decade.

What Stephen King said about it: “READY OR NOT is big fun–a variation on the “last girl left” horror movie that is by turns scary and very funny. Samara Weaving is terrific, and the cinematography is gorgeous. The film doesn’t reinvent the wheel, but it’s damn cool.”

The most recent film on this list, “Ready Or Not” is a horror-comedy which no one anticipated, but which turned out to be one of the year’s most pleasant surprises.

Directed by Matt Bettinelli-Olpin and Tyler Gillett (both of them produced the 2016 horror anthology “Southbound”), “Ready or Not” takes place on the wedding night of Alex and Grace Le Domas (Mark O’Brien and Samara Weaving). But the eccentric and wealthy Le Domas family has a long tradition which consists of playing a game each time there is a new addition to their family. At first, Grace believes that the game is just harmless fun, but it turns out that her new family is serious about it and what starts as a game of hide and seek soon turns into a violent fight for survival.

Critics compared the film to “Get Out”, but unlike Jordan Peele’s film, “Ready or Not” was not a hit. This is unfortunate, for “Ready or Not” is entertaining, darkly funny, twisty and way better than it had any right to be.