Whilst many prefer The Exorcist and/or The French Connection, some stand by the fact that William Friedkin’s true masterpiece is, and always has been, To Live and Die In L.A, his 1985 crime thriller focused on Richard Chance, a secret service agent, and his hunt for the counterfeiter who murdered his partner, played by Willem Dafoe.

With one of the most thrilling and enchanting car chase sequences ever put to screen (no surprise from Friedkin, really), some of the most impressive and visually arresting colour grading of the 1980s – need you be reminded of the bombastic colours splattered all over most films at the time – and some of the most interesting exploration of loss within a policing setting. It’s vibrantly colourful, pulse-pounding, classic entertainment from one of the best directors ever to make crime films.

One more film bound to split audiences in half, Speed Racer is one of the most ambitious studio films of the twenty first century so far. Starting off more hallucinogenic than The Beatles and only bringing the bar up until the culmination which feels ripped straight out of a Stan Brakhage film, it is also one of the most focused (on being completely crazy) films of recent memory, bringing in one key idea and giving it everything.

It feels almost ironic for a film this colourful and in-your-face to mock capitalism and greed, but it’s all here, and it’s genuinely hard to believe that a studio is behind such a film, one completely detached from just about anything else out there.

Almost the entire film is plastered in special effects, and that is what makes it works – truly a film for those who say that CGI never works well – using the insane visuals to put the audience deeply within this world and within the headspace of the protagonist in a way that few films have the guts too.

It’s relentlessly paced, ridiculously enthralling both visually and narratively, and furthermore it has real points to make about self belief. Definitely one more appropriate for a family setting, too. 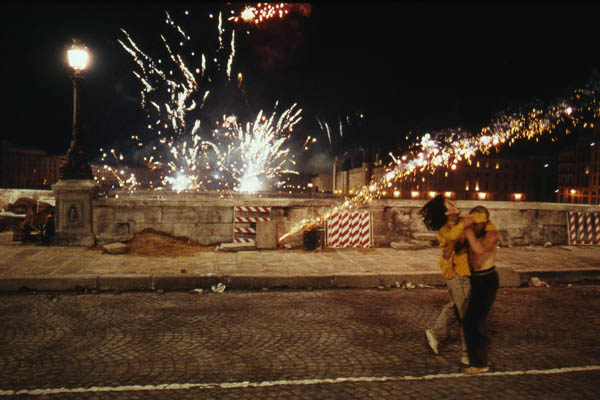 Another film that is mostly exciting because of its intrinsic focus on visual storytelling, and particularly the use of expressive camera movements and motivated character movements to match (This is seen throughout Carax’s entire body of work, his performances are always so physically demanding, in a refreshingly unique way, too), Leos Carax’s mesmerising Lovers On The Bridge stars the always phenomenal Denis Lavant alongside the wonderful Juliette Binoche in two of their finest performances to date as two vagrants.

Lavant’s alcoholic Alex and Binoche’s afflicted painter have stunning chemistry in the leading roles, likely partially down to their working together on Carax’s previous film Mauvais Sang (1986), only adding to the kind of tension that comes from all of the different parts of the film.

As with most Carax films, Lovers On The Bridge has it all – tension, romance, beauty, tranquility and just about anything else an audience member could ever ask for – and with form as strong as it is here, alongside a truly unique style and vision, it’s a must watch.

Often mentioned within the context of undeservingly forgotten classics, Steve De Jarnatt’s genre-blending apocalyptic romance is one of the most breakneck paced and joyous films ever produced, no hyperbole involved. Starting off as a romantic comedy and eventually devolving to a kind of tension packed thrill ride with nuclear panic horror as pungent as that of the infamous BBC TV movie Threads (1984), there’s no denying that De Jarnatt’s film has quite the impressive range, and there is even less denying that, against all odds, the film somehow pulls each and every one of them off beautifully.

It’s a total cinematic treat, a film so involving and so pressing with this bundle of emotions that it becomes almost impossible to escape the overwhelming range of emotional outbursts featured throughout, from romance so cute it makes you want to find someone to love and nuclear horror so deeply petrifying it makes you want to hide away on some remote island, or in a cave.

The Tangerine Dream score is electrifying (and maybe their best… really!), the performances are just as versatile as required by the genre-blending at play here, the writing is impeccable and the direction is so witty and precise. The form is enough to be exciting completely by itself, the thrills provided by the story and the way it unfolds is just an addition win for the audience.

One of the few Scorsese films that don’t seem to garner enough recognition, or at least not as much as it deserves, After Hours is a wonderfully eccentric film about one night gone horrendously wrong time and time again.

Narrative progression like this is hard to come by, especially as beautifully executed as it is here, with Scorsese’s masterful control over the tone also shining through from start to finish, guiding an unassuming audience through the horror and dark relief of one great night slowly rotted down to the worst imaginable.

It is one of Scorsese’s finest films, both hilarious and disturbing, relentless and idiosyncratic and even very balanced considering the ambition of a small story turned huge. The performances across the board are terrific, especially with Griffin Dunne giving a career best as Paul Hackett, one very distressed word processor finding himself stuck on some hellish hamster wheel in a dizzying, cyclical pit. It’s a lot funnier than it sounds… that’s a promise.