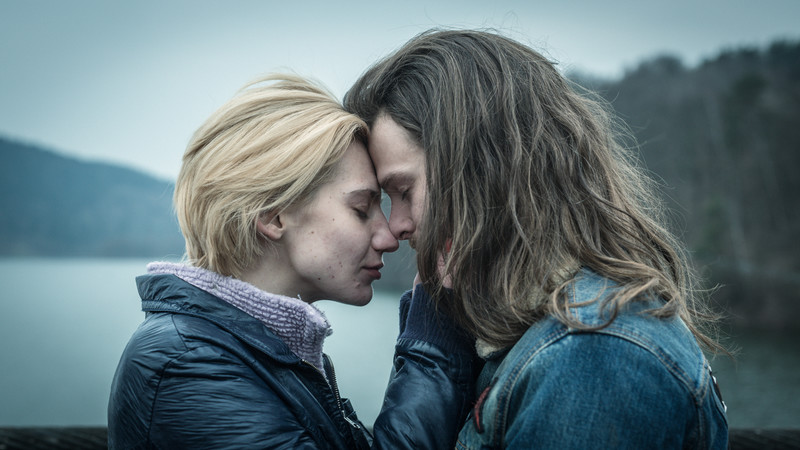 Twarz’s very first images — close-ups of blank faces in the cold — initially give the viewer the impression that we will be in for a serious drama. Then it cuts to establish the setting: these characters are standing outside a Christmas underwear shopping spree that’s just about to start. The lights turn on, the doors open, and people stream in, stripping down to their garters and going crazy over cheap televisions.

This opening scenes quickly establish the tone of the film as a whole — mixing sadness and comedy to approximate something like life itself. For the most part, this genre-blending works, resulting in a symbolically rich, at times hilarious movie about identity, family, Catholicism and relationships.

Twarz (Mug) stars Mateusz Kosciukiewicz as Jacek, a happy-go-lucky young man without much direction in his life. His family tell him as much, imploring him to cut his hair and start acting like a real man. His sister (Agnieszka Podsiadlik) is a little nicer, telling him to run away to London — even if they supposedly don’t like immigrants anymore.

He is happy nonetheless, because he has a sweetheart, the beautiful Dagmara (Malgorzata Gorol), and they plan on getting married together. But while he is working on a grand construction project, he falls dramatically and destroys his face. Thankfully he survives thanks to a face transplant, but this leads to a complete change in how people see him and how he goes about his life.

This change is reflected in the film’s style. While the first act feels chaotic and inspired — with the sense that it could really go anywhere — the second and third acts are much slower and more contemplative, thus deepening the story. Director Malgorzata Szumowska has many personal flourishes that give this film a wacky feel — most notably the soundtrack, which moves between Metallica, trashy EuroPop and traditional classical music. There is a lot of confidence in the blend here, establishing Szumowska as a unique voice in European cinema.

It is a bitterly funny movie, with certain comic exchanges that would make Groucho Marx proud. The stereotype of the awkward priest is deployed to excellent effect, the confessional booth comprising the film’s very best moments. There are many moments like this that help to flesh the tale out and give it life, yet perhaps there are too many of them, giving the film an episodic feel that diminishes its overall impact. There are a lot of supporting characters here too, with most of their arcs revolving around Jacek — yet this means that some of the subplots feel underdeveloped.

At 90 minutes, it feels like a brief fairy tale — with a cast this good, the film possibly could have benefited from being a lot longer. By telling a mostly episodic narrative with a large cast of characters Twarz stretches itself a little thin. This is frustrating as there are a lot of interesting things to grapple with here — most importantly religion, and the different types of love we can expect to receive in our lives.

Poland is a deeply Catholic country, and this film reflects that reality, with most of the community revolving around the Church and characters constantly crossing themselves and asking how they look in the eyes of God. The importance of religion is reflected in the central symbol of the movie; a statue of Christ that is being erected to be even bigger than the one in Rio De Janeiro.

This is based on the true construction of Christ the King, which now stands as the tallest statue of Christ in the world. This idea of redemption is found in the timeline of the story itself — which moves from darkest winter to bright summer, with classic Polish Communion parties in toe. Christianity tells us to love our neighbor, no matter what happens to their face, making Twarz act as an allegory for the selfishness of other humans in the face of God.

Both poking fun at humanity and religion, while still managing to empathise with those same emotions, Twarz pulls off a delicate balancing act that singles the movie out as a strong testament to the human condition. While it could’ve benefited more from explaining why the surrounding character’s feelings towards Jacek have changed, it has an allegorical aspect that will no doubt be parsed out more in to come. Very nearly a masterpiece, it only needed to bring these emotions into sharper dramatic focus to really make it one of the best films at the Berlinale.