What does communism and sexuality have in common? W.R: Mysteries of the Organism tried to find out. Whether it succeeds is a different story – but the effect is deliriously exciting to watch. Serbian director Dušan Makavejev cuts together documentary footage and clips from other movies such as the Stalinist propaganda movie The Vow with his own fictional narrative – telling the story of a Yugoslav woman trying to seduce a Soviet ice skater.

Melding together different settings and time periods, W.R: Mysteries of The Organism still manages to tell a coherent and deeply humorous story. It began with a documentary about the Austrian analyst Wilhelm Reich, but soon devolved into a wider satire of both sex and politics.

This is typical of Makavejev’s films, which often have the feeling that they are being made up as they go along. When it was screened in his native Yugoslavia, W.R. was banned for its criticism of the regime. Later comments made by Makavejev then lead him to be kicked out of the country until the Yugoslavian regime ended.

Nearly any David Lynch film could’ve been on this list. From the wild Hollywood ride of Mulholland Drive to the small town horrors of Blue Velvet, Lynch is easily the greatest living surrealistic filmmaker still around.

We went with Eraserhead as it shows that even with his debut film, Lynch was already pushing for new means of cinematic expression. A symbolic exploration of a young man’s fears of becoming a father, it is one of the most viscerally arresting films ever to be made in the USA, a work of fierce and bizarre originality that’s full of strange images that seem to lodge their way into the viewer’s mind forever.

As is now a common Lynch trademark, he worked on the sound design with Alen Splet himself, creating a symphony of distorted, squelching noises that constantly threaten to split the film apart. That a filmmaker such as David Lynch found a way to become such an important filmmaker in contemporary Hollywood cinema is nothing short of a miracle. It would’ve made Maya Deren happy.

Maya Deren was the quintessential indie filmmaker. She filmed everything herself in 16mm, none of her films lasted longer than an hour, and set herself up in complete opposition to Hollywood.

Her debut short Meshes of the Afternoon was shot on a budget of only $275 and only lasts 14 minutes, yet its influence on experimental cinema is incalculable. It shows a woman sleeping on a chair and dreaming of a mysterious hooded figure with a mirror for a face. Mixing between subjective and objective camerawork, it is as much inspired by film noir as it is by surrealism, a hard-to-process avant-garde work that rewards multiple viewings.

Playing with repetitive motifs as well as destroying conventional spatial awareness found in films, it sought to replicate how the mind can change a banal incident into something of profound meaning. Her work with subjective camera-angles and circular motifs especially would be an influence on David Lynch, especially the films Lost Highway and Inland Empire. 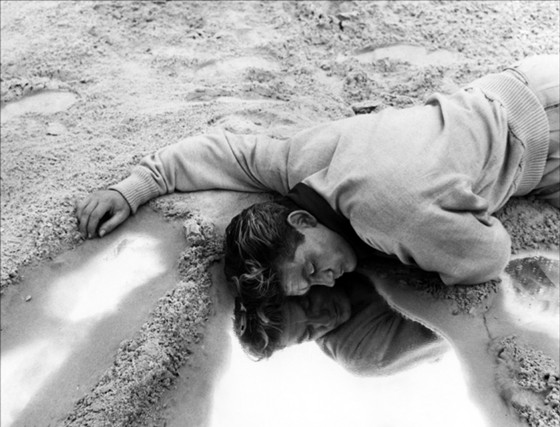 Poet, novelist, playwright and artist Jean Cocteau was associated with the surrealist movement a long time before it found its way into film. Although he personally denied being a part of the surrealist movement, his revolutionary libretto for the ballet Parade, with music by Erik Satie, was described by the poet Guillame Apollinaire as being “a kind of surrealism” – announcing the first use of the word before any official movement took place.

Perhaps he is best known for his films, including one of the first and best adaptations of Beauty and the Beast. It is his Orpheé that stands as one of the best works of surrealism as it blends elements of the myth of Orpheus and the descent into the underworld with scenes of everyday life.

To help achieve the effect of moving into the underworld, Cocteau used trick photography to give the illusion of a character passing thorough a mirror. Its most famous images are the two motorcyclists who accompany death – once again mixing the elements of the mythic with the modern. It’s a simple yet effective tale, made brilliant by Cocteau’s straightforward special effects, which give it a dreamlike feel.

A midnight movie staple, The Holy Mountain confounds and delights in equal measure. Any number of Jodorowsky movies could have made their way onto this list, including acid Western El Topo and the avant-garde horror movie Santa Sangre, but The Holy Mountain is easily his best film for the way it plays with the very fabric of cinema itself.

An experimental drama depicting the journey of an alchemist leading a Christ-like figure up to the top of a mountain that supposedly unites Heaven and Earth, it is hard to comprehend without prior knowledge of tarot cards and religion but easy to enjoy given its wealth of heady visuals.

This is a movie overladen with unexplained images that linger long in the mind after the film has gone. Whether it’s frogs wearing amor or the crucifixes made of bread, Jodorowsky has an unendingly creative vision, and can conjure up strange visions seemingly every couple of minutes. They may be hard to comprehend but works perfectly well on a purely visual level. Combining the sacred with the profane, The Holy Mountain is the kind of film only he could’ve made – a psychedelic fantasy that pushes at the very fabric of reality.