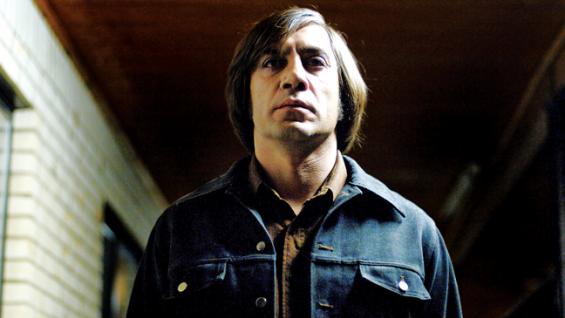 This is a case where “coolness” rears its head. In No Country For Old Men (the second Coen brothers character to appear on this list), Javier Bardem gives us a performance that is chilling.

Anton Chigurh is not an inspirationally cool person. He’s cool because he walks the earth with a single purpose: he is the grim reaper. The way he murders people without emotion is terrifying because of how indifferent he is. Even when we see him in pain, it looks like it affects him differently than it would an average person. Anton Chigurh is not someone to look up to, but he is definitely unforgettable.

4. The Dude – The Big Lebowski

You can look at The Dude in two ways: one being he’s a loser, a man who wears a bathrobe in public. The second being he’s a guy who is exactly where he should be in life. As the narrator puts it, “He’s the man for his time and place.” However you look at him, The Dude is another influential character in terms of being cool. He’s not an action hero, but that doesn’t make him any less cool: his state of mind is almost inspiring.

The Big Lebowski just turned 20 years old this year, and people are still quoting The Dude. Even if you view him with contempt, as he would nonchalantly say, “Yeah, well, you know, that’s just, like, your opinion, man.”

I learned how to parallel park by watching Bullitt. When people talk about Bullitt they usually talk about Steve McQueen’s car chase scenes, and his style (the tweed sport coat and navy blue turtleneck will forever be linked with McQueen).

But the one scene for me that encapsulates how cool the character of Bullitt is: at one point he does his groceries, and drives back to his home. He parallel parks within seconds on a steep street (in San Francisco), getting it perfect on the first try and making it look incredibly easy. The night before I took my driving test I must have watched that scene 100 times.

Le Samouraï is one of the most influential films of all time. Without Alain Delon’s performance as Jef Costello, there would arguably be no Drive, Baby Driver, or Vanishing Point.

Melville’s choice to make a main character silent was effective, and would be imitated for years to come. Jef Costello gives you the impression that he’s in complete command of himself.

1. The Man with No Name – Dollars Trilogy

Taking cues from Kurosawa’s Yojimbo, The Man with No Name is such an iconic character it influenced the entire Western genre.

Like Melville’s Jef Costello on this list, both characters are known for being quiet and in control. Traces of The Man with No Name influence can be seen in other popular Western characters like Sergio Corbucci’s Django, and the Sartana series.