From Bertolucci’s dynamic liberation and Kechiche’s kinky romanticism, to Bergman’s sensual summer haze and Breillat’s crashing naturalism, to Clark’s exploitative cult favorites and Solondz’s wizard ambivalence, to Jires’ fantasy-horror sexual awakenings and Skolimowski’s graphic colorful canvas, to Borowczyk’s voluptuous borderline pornography, this list is a selection of films that deal with the subject of sexuality in adolescents through various angles and through various forms.

Based on Julie Maroh’s graphic novel of the same name, the story in “Blue is the Warmest Color” revolves around the relationship between a teenage girl named Adèle (Adèle Exarchopoulos) and Emma (Léa Seydoux), an art student. Adèle seems to be confused about her sexual identity until she meets the charming blue-haired Emma, with whom she forms a passionate and ultimately turbulent relationship, when the two girls realise that their personalities do not communicate the way their bodies do.

Adèle is a school student uncertain about her sexuality and social life, who by the end of the film has become a teacher who knows herself a little better. Through a process of sexual quests and experiences, Abdellatif Kechiche’s coming-of-age film tells a story of growth and maturity and, of course, a love story. As it is with stories about growing up, they are always love stories in a way, and vice versa, love stories are always stories of growing in a way.

“Blue is the Warmest Color” raised some discussions upon its release for a number of reasons, including the sensual on the verge of degrading way the women’s body and the women’s love is presented on camera, and for its explicit, extended sex scene where the two girls please each other.

But whether it’s exploitative or pretentious at some parts – as far as the maker’s eyes are concerned – the film could nonetheless be seen as a charming, naturalistic tale of falling in and out of love, experimenting, and the evergreen subject of identity seeking between two young people who just happen to be women. And the two women give some undoubtedly fine performances, too. 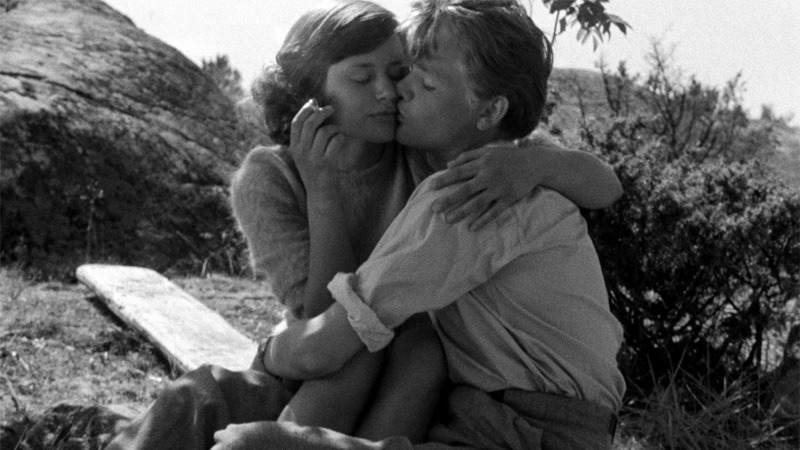 “Summer with Monika” is a black-and-white film by Ingmar Bergman, which was based on Per Anders Fogelström’s novel of the same name. Monika (Harriet Andersson) and Harry (Lars Ekborg), both in their late teenage years, both in jobs that don’t satisfy them and families they are tired of living with, fall in love soon after they meet and decide to leave Stockholm and spend the summer in Harry’s father’s boat. By the end of the summer, however, as it usually happens, summer’s infatuation gives its place to fall’s responsibilities, and the teenagers’ dreamy love is crashed by reality.

“Summer with Monika” is a rather untypical sample of Bergman’s filmmaking, but among his most well-known and discussed. It’s a film of unusual cinematic “boldness” for the time of its release, at least for the Swedish and even for international (with some exceptions maybe) cinema for its profound use of nudity. Bergman’s camera touches Andersson’s body with a gentle, romantic but at the same time realistic way.

The film portrays the ups and downs of young love, with sexuality playing a key role in the intensity of these early experiences for most people. Thus, Bergman’s film is filled with fresh eroticism, not only in its most intimate scenes, but as a whole. 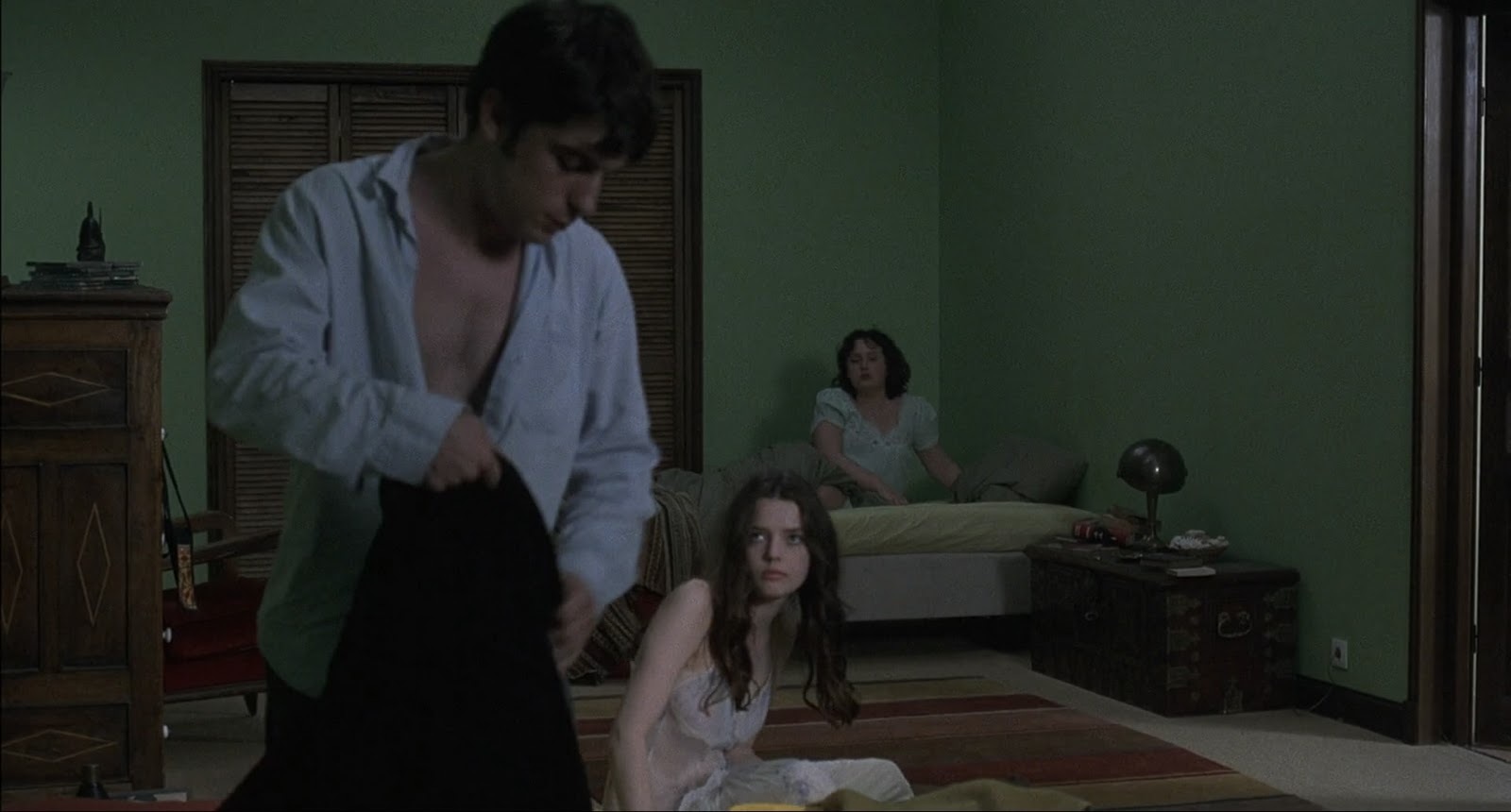 Fifteen-year-old Elena (Roxane Mesquida) and her 12-year-old sister Anaïs (Anaïs Reboux) are on a family vacation in the country, wandering around and talking about boys. They are both virgins and both very curious about sex, although they seem to have a different attitude toward it. They meet Fernando (Libero De Rienzo), an Italian student with whom Elena forms a relationship.

Fernando is sexually experienced and tries to convince Elena that he loves her and they will be engaged, and that love and sex are the same thing in order to get her to overcome her objections and have sex with him. He visits the girls’ shared bedroom at nights where the young couple shares their intimate moments, while Anaïs, who pretends to be asleep, watches and hears them with agony.

Here, the process of exploring teenage sexuality follows two parallel paths through the depiction of two different adolescents, with very different viewpoints on the matter and dissimilar sexual experiences. Elena seems much more liberated, while Anaïs is more negative, defensive and romantic. This, however, is somewhat reversed by the film’s tragic ending, showing that the crucial time of sexual awakening is both a highly enjoyable and also a terrifying process for teenagers.

In Breillat’s film, the limits between pleasure and pain and between romanticism and carelessness are intentionally vague, without one being represented as better than the other, as the ultimate stake for young people is always an urge to grow up in one way or another.

Mike (John Moulder Brown) gets a job in a public bathhouse as an attendant, where he is trained by an attractive co-worker of his named Susan (Jane Asher). Mike is 15 and sexually inexperienced, while Susan is 25. She is aware of her impact on men and casual about her sexuality.

Although engaged to a wealthy man, she maintains a relationship at the same time with a married swimming instructor who also works at the baths, and generally likes to tease men, including Mike. The latter, however, falls in love with Susan and starts fantasizing about her more and more as times goes by.

“Deep End” is a fresh and vivid film about a fresh and vivid subject with brightly colored shots that constitute a significant enhancement on this. As David Lynch has stated in an interview about it, “I don’t like color movies and I can hardly think about color. It really cheapens things for me and there’s never been a color movie I’ve freaked out over except one, this thing called ‘Deep End,’ which had really great art direction.” 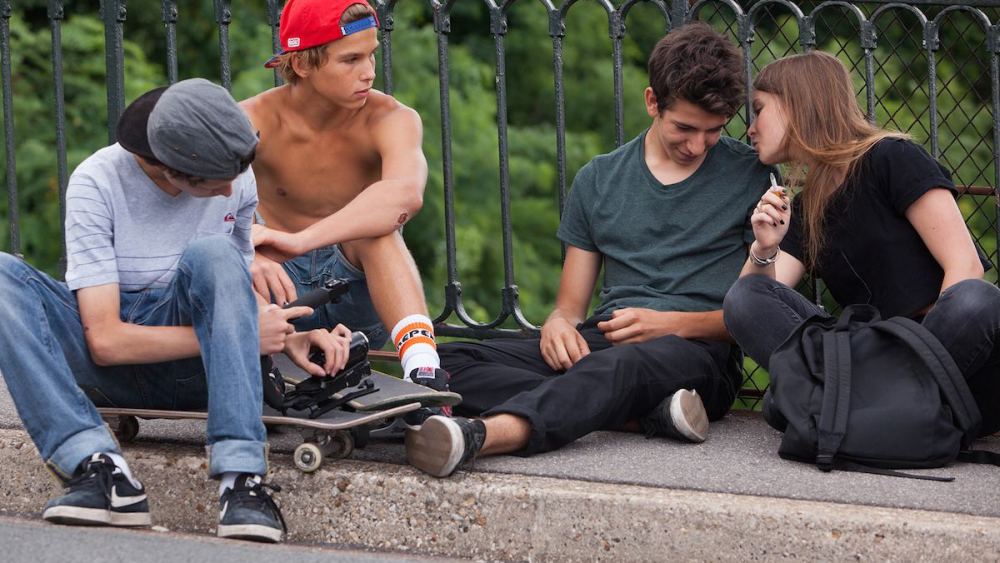 The film follows a group of teenage skateboarders, this time in Paris, in search for identity and adventure, a consistent pattern in Larry Clark’s films. They are shown to drink, smoke, do drugs and have sex, and some of these characters work as escorts for older men just for the extra cash.

Math (Lukas Ionesco), who looks like he was brought to life from a Renaissance painting, is perhaps the character the camera mainly centers around. He and his best friend JP (Hugo Behar-Thinières), who is in love with him, are both escorts. Everyone seems to be attracted to Math.

In “The Smell of Us,” Clark’s perspective has changed a bit. Although his main themes and aims remain the same – the process of growing up and the need to stand out while at the same time fit in – this time he focuses on a middle-class, wealthy, pretty-looking youth.

The kids here are not left alone and abandoned, but rather overprotected and taken care of. And they are tired of that. They attempt to kick against the pop culture they’ve been brought up into through pop culture itself, resulting in strengthening it. Their obscene sexual behavior is, through the director’s eyes, their only original means of resistance.

Unlike teenagers in his other films, where eroticism appears through realistic depictions of everyday routines or as just a part of a bigger picture of indifferent meaning, here they are sexy and they know it. The director’s camera literally caresses its protagonists with a more sensual way than ever before.

More sexually liberated than ever, more autobiographical than ever (one of the group’s friends is constantly filming them with a camera, and Clark himself appears in the movie as an older guy who likes to hang around them) and more stimulating than ever, “The Smell of Us” proves that Clark, in his 70s now, and his pictures are, above anything else, an ode to the young body and the excitement of youth, which is – whether pretty, self-destructive or disturbing- unfailingly a feature that, once gone, one will always envy.