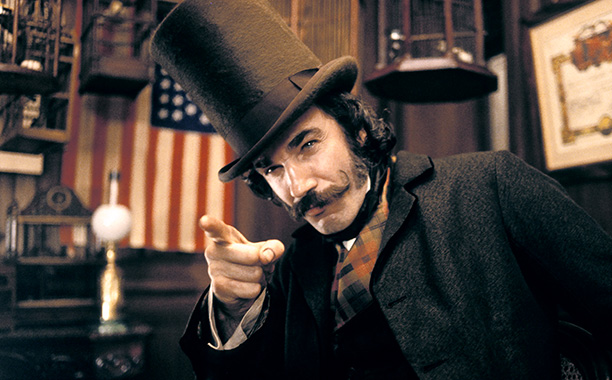 Definitely the best actor of his generation, Daniel Day-Lewis is the only male actor to win the Best Actor Oscar winner three times as an outcome of an astonishing career, in which he gave cinematic life to many different characters, some of whom are already considered classics.

Born in a multicultural (British – Irish – Jewish – Polish) and artistic family, his father was a poet, his mother an actress, and his elder sister a documentarian. He was engaged with acting since the age of 14 in Schlesinger’s “Sunday Bloody Sunday,” and then he participated in various Shakespeare companies. With strong theatrical experience in his arsenal, he appeared in the big screen again in 1982 with a small part in “Gandhi,” followed very soon by three remarkable movies: “Bounty” (1984), “My Beautiful Laundrette” (1985) and “A Room with a View” (1986).

These films proved that he was an actor of remarkable talent who knew to wait and weigh the roles offered to him, always choosing the best. That remained one of his most remarkable characteristics, as in an almost 40-year-long career he made just 21 movies, waiting two or three years to pass from one performance to the other so that the old part would be washed away and he could dive deep into the new one. That is noticeable and makes most of his performances at least remarkable.

And far more than that. He is known for turning down mega-proposals and opting for small productions that have meaning for him. The only time he was rejected a role was that of Vincent Vega in “Pulp Fiction,” which was given to John Travolta.

Leaving aside the movies where his played supporting roles – like “The Bounty” and “Nanou,” but not his very characteristic Cecyl in “A Room with a View” – we’ll start counting down from worst to better and then excellent! 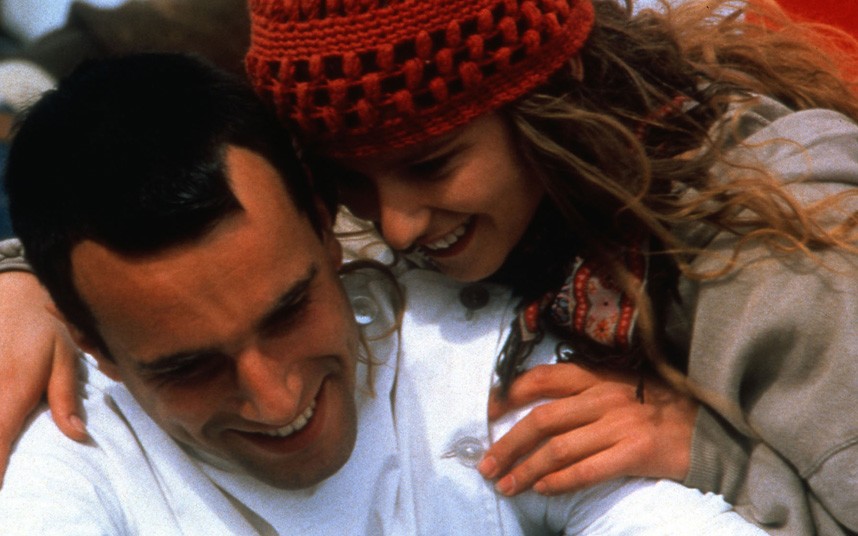 Why not a road movie? Shot in Argentina, Patagonia, the end of all lands? With a South American director, a Serbian star as a co-protagonist, and various Argentine and Uruguayan actors and actress? That sounds like a perfect chance for a break from the strenuous work he did with “My Left Foot,” a time to think, travel, have a good time.

This bizarre comedy from Carlos Sorín, which leaves the spectator confused as to what he is aiming at, was a commercial flop that discouraged him and drove him away from directing for several years – he needed to think more seriously about what he wanted to film. As for Day-Lewis, I bet it was the most easygoing role of his long career. 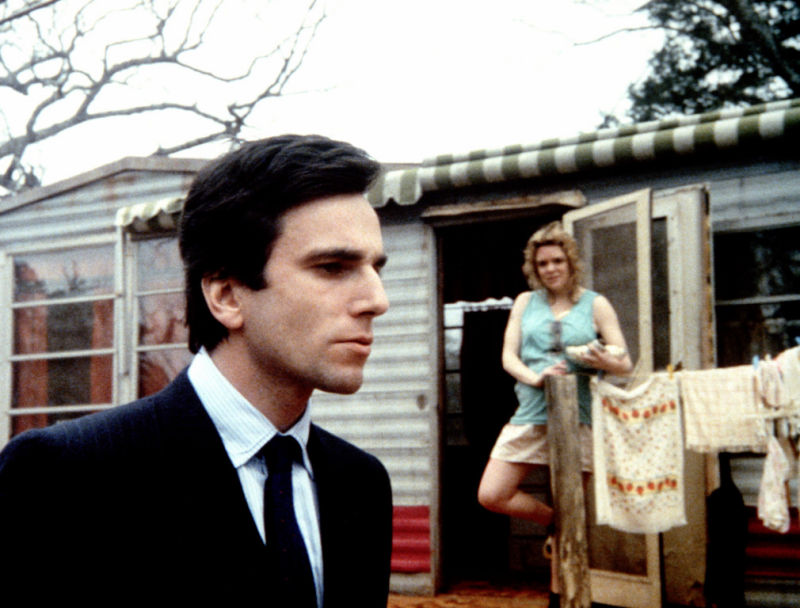 The only comic role in the flashing career of Day-Lewis is almost forgotten, as it is this film: a comedy about the English and the American way of living. Day-Lewis plays Henderson Dores, a British art expert who travels through the Southern states in search of a Renoir painting.

There, he comes across some very strange characters who build an authentic fish-out-of-water farce that unexpectedly became a big hit in the 80s, and after awhile no one talked about it.

It is not that Day-Lewis is any worse than Mastroianni. They are both iconic, legendary actors of their respective times. It is the terrain he chose to play.

“8 ½” is Fellini’s absolute masterpiece. A very personal film. Even considering copying it would be a sacrilege. What’s more, it was turned into an American musical, an alternative of “Chicago,” though the film was based on a Broadway musical that was based on “8 1/2,” which was semi-based on Fellini’s autobiography.

“8 ½” is Mastroianni’s absolute terrain. It was a movie Fellini directed just for him. Though Day-Lewis was very good – he always is – he cannot stand any comparison. A movie on a movie that was about a movie that was going to be a flop. Flop, flop, flop!

14. Tomas in The Unbearable Lightness of Being – Philip Kaufman, 1988

In such a low place on the list with Day-Lewis’ own words: “I was unhappy most of the time… even though it was the part and the film that everyone wanted to do.”

Based on a novel by the famous Czech writer Milan Kundera, this film tells the romantic love story of a womanizing doctor in communist Prague, and a timid girl he meets in a resort and who turns out to be the love of his life.

Between two women, just like in “The Age of Innocence,” Juliette Binoche and Lena Olin, Day-Lewis decently performs the part of a young and handsome man who strolls around women and doesn’t realize how he – happily at the very end – stays with only one and enjoys a humble life. This is as Prague’s revolt against the communist regime in spring of 1968 dramatically changed his life.

But with no inspiration! He still has the lavish looks of “Laundrette,” but seems rather detached. 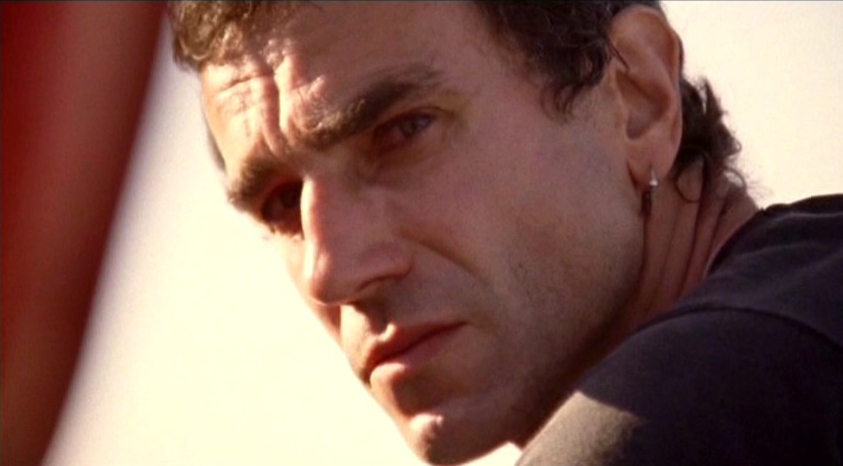 With his wife on the other side of the camera, Day-Lewis plays the leading male role in this bittersweet coming-of-age movie as an aging wealthy hippie who raises his daughter alone in an unconventional way, on an island on the East Coast that is rapidly changing through gentrification and the settlement of high income mainlanders.

Jack and Rose form a peculiar monoparental family; they mean everything to one another and cannot even stand the thought that one of the two might die and the other will be left alone. As Jack has a serious heart problem and is facing imminent death, he tries to ‘create’ a family for Rose, inviting his girlfriend and her boys to come and live with them. But things, either in life or in the movies, don’t work this way.

Day-Lewis plays a low-profile, controversial character who balances between idealism and egoism, an environmentalist who respects nature but not human beings, whom he believes can be bought and sold. A balanced, beautiful performance – and what an accent! 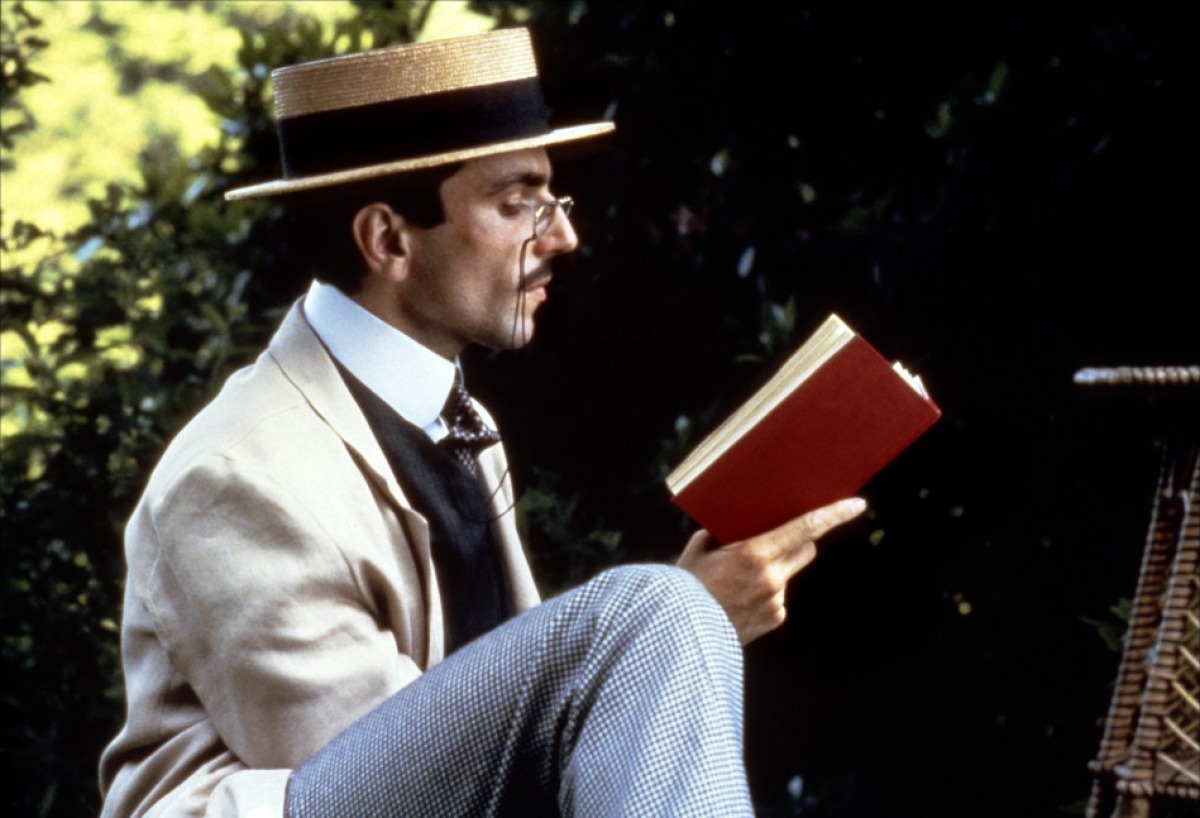 The very same year with the shooting of “My Beautiful Laundrette,” Day-Lewis plays a totally different character in the cinematic adaptation of Foster’s “A Room with a View.” The character of Cecil Vyse was, according to Day-Lewis, “The person you would be in your worst nightmares”: a snobbish upper-class Londoner with suppressed emotions and ironic airs. So much different than Johnny in “Laundrette.”

And still, this is one of Day-Lewis’ most worked and convincing performances. He altered his accent and acquired the clumsiness and rigidness of English elite to provide the perfect contrast to his rival’s free mind and careless behavior. A brilliant combination of script and direction, with an excellent cast of English actors and actresses, “A Room with a View” is still considered a classic masterpiece. 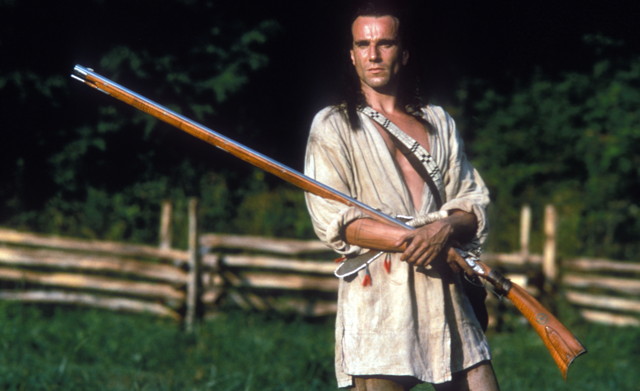 A beautiful movie with stunning cinematography and inspiring soundtrack. A famous novel that laid behind. Two hours of pure cinematic spelling.

Being his first big-budget Hollywood movie, Day-Lewis didn’t forget the Method, so he went to the forest several months before the start of shooting and lived on his own, hunting and fishing. So we can see on the screen a body that has been accustomed to this way of living, one that moves fluently, able to express both tension and relaxation. He makes himself part of the landscape, just the way a Native American would do.

So it is the body that mostly plays in this movie. Being a movie full of action, it doesn’t help Day-Lewis display all the range of his acting capabilities. 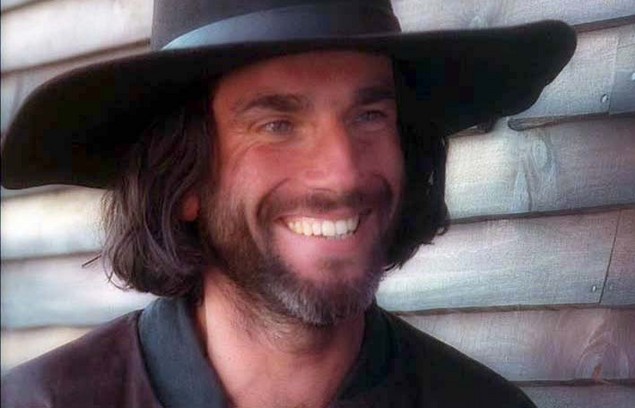 Arthur Miller wrote a play and then adapted it to screen based on historical events about the witchcraft trials in Massachusetts in the 17th century, openly referring to the McCarthy hunt for witches and his notorious HUAC. Salem could be easily paralleled to Hollywood microcosmos and the devil that the church officials so passionately tried to eradicate, and to communism.

Day-Lewis played the leading role of John Proctor, a man who had been desired by a devilish young woman who would do anything to have him, even put the whole village in a dead-end confrontation with superstitions and the avid taste of church officials for innocent blood. Divided between his lust for Abigail and the love for his wife, he will reach the extremes in his efforts to save his wife when she is accused of witchcraft.

In one more of his superb performances, he refrained from washing himself and lived under extreme conditions throughout the shooting of the film, faithful to what the Method dictates. The outcome was a highly convincing performance of a character who would stand against gods and demons struggling to protect the ones he loves and battle his inner ghosts.

He gave some of the most moving moments of his acting career and got rewarded well for it. During the shooting he met Rebecca, Miller’s daughter and soon to be his wife and life companion. 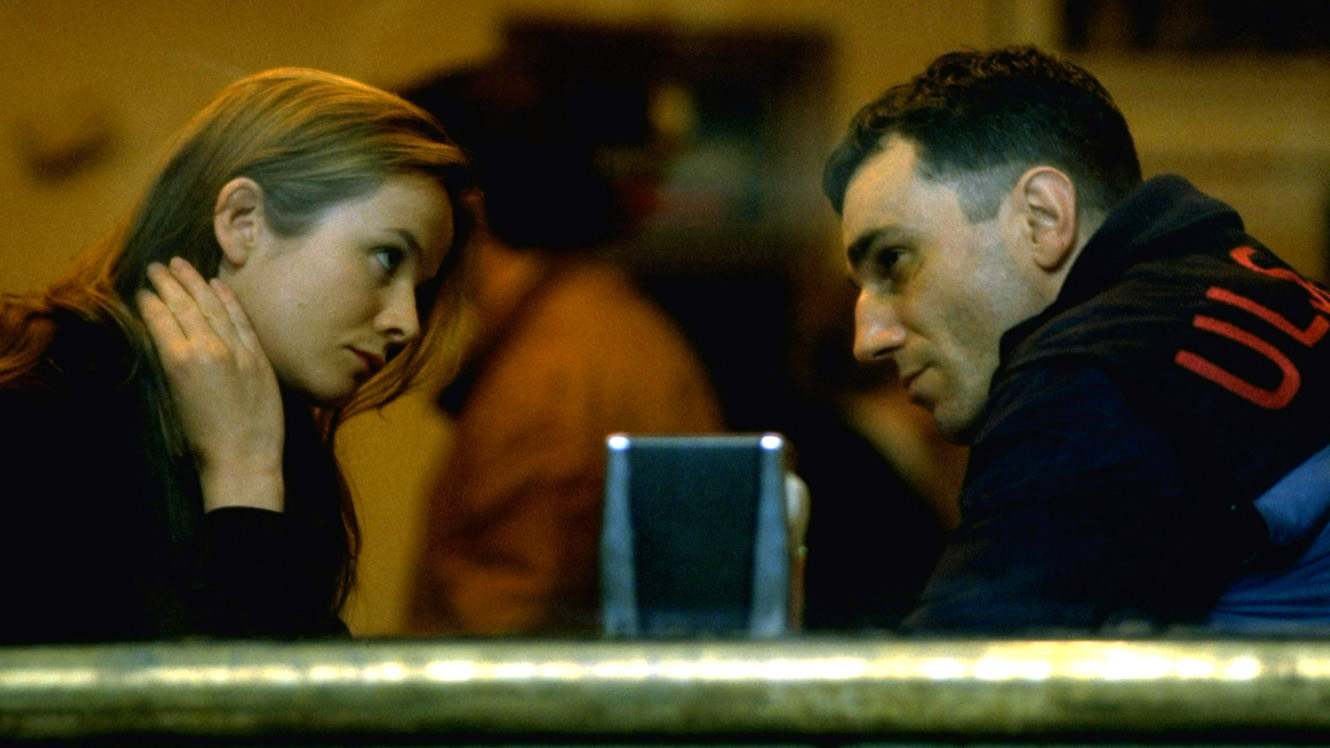 Though it has been a great pleasure to rewatch most of Day-Lewis’ movies in order to write this list, it was an even greater to discover this movie which I haven’t seen before.

The third collaboration of Day-Lewis and Sheridan, a film about the impasses of the armed confrontation in Northern Ireland, and the painful efforts for an armistice and peace told through the story of Danny Flynn, a 32-year-old boxer who served 14 years in prison for assisting in IRA activities and who returns to his old neighborhood.

As he has cut short any relations with the armed branch of Catholic resistance, he is unwanted by his old friends for his change of opinion and for getting close with his old love, Maggie, who’s married now to his best friend who serves a sentence in jail. And the wives of prisoners are enclosed in their own cell in the conservative Catholic micro-society of Belfast IRA fighters.

Though not one of his great performances, I think that this is the part he ever played most close to his own personality. Danny is sentimental and introvert, just as Day-Lewis describes himself in his early years. It is as if he lets us cast a glimpse into his very inner self, in a role that has no high climaxes but rather lets tension lie underneath the skin.

Moreover, together with Emily Watson they form one of the most tender couples I’ve seen in cinema, as their forbidden love can be expressed only through gazes and futile touches. Last but not least, it is a highly engaged political film that takes postures on the Northern Ireland question in a very crucial moment on the way toward an agreement with the U.K. government.