This list/article is the sixth in a series arguing that for cinema to be and to be taken seriously as an artform, it must forgo and move beyond Hollywood-like visual-based ways of meaning-formation/understanding into actor-, face-, dialogue-, voice-, emotion-, body-, character-, feeling,-, behavior/psychology-, and tone-based ones.

It is focusing on “Dancer in the Dark” (2000, Lars von Trier) and is using it as an example of a film not fetishizing hollow technologies and eschewing Hollywood’s standard “cinematic gaze, devices, tools, language, and expression” visually-based method of having audiences instantly decode camera angles and the like, instantly telling viewers how to feel as substitute for the hard work and the actually-lived experience needed to understand their own and the characters’ emotionally-complex situations (and other than shallow technical tricks as shortcuts to them), teaching them new things about themselves and their lives (and not about how camera tricks operate), and which actually require some knowledge about life (and not about how camera tricks operate) to understand.

Readers are strongly advised to read my four previous articles, especially (though by no means only) the lengthy theoretical/aesthetic introduction to the first, which obviously cannot be reprinted here for reasons of brevity, for a fuller understanding of this intellectual/critical project (and also because some important information contained therein about several directors to be discussed will also not be reprinted).

1. Its Negation of Standard Hollywood Modes of Representation Refocuses Its Experience of Suffering on the Human Body, Thus Bestowing Actually-intense Emotions/Feelings 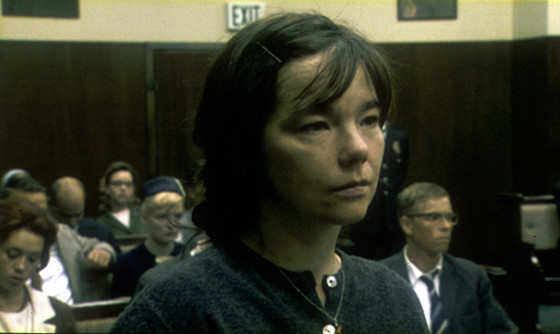 “Dancer in the Dark,” starring Icelandic singer Björk Guðmundsdóttir as Selma Ježková, a simple-minded Czechoslovakian immigrant in the United States with a degenerative eye condition who is increasingly losing her vision, opens and makes it clear that it is dealing with neither an attempt to explore a generic idea, nor to use camera devices and techniques as a shortcut to understanding of emotions (either the audience’s’ or the characters’).

One has to always bear in mind that what are usually seen as signs of greatness in other artforms – namely their bestowal upon audiences’ emotional experiences that are complex, ambivalent, confusing, un-pigeonholed, profound, and irreducible to easy and quick understanding; their tendency to challenge audiences’ preconceptions in order to change their lives for the better, rather than pandering to their preconceived prejudices, etc. – are frowned upon by the overwhelming majority of film journalists (“critics”) for whom the “greatest” films are that “great” precisely because they lack any semblance of emotional depth/complexity and are crystal clear (in the sense that audiences always know exactly how to feel rather than having unsure emotions). Rather, an exploration of facial and bodily shifts and turns.

Von Trier’s Dogme 95 method would have none of that. Rather than fetishizing hollow technologies, what makes him one of the greatest and most emotionally profound filmmakers who has ever lived is exactly his eschewal of Hollywood’s standard “cinematic gaze, devices, tools, language, and expression” visually-based method of having audiences instantly decode camera angles and the like as substitute for the hard work and actually lived experiences needed to understand their own and the characters’ emotionally complex situations.

This is a subject I have thoroughly dealt with in my previous five , instead refocusing on actual bodily-based learning experiences, assigning meanings to acting and facial/verbal shifts and tones that genuinely teach his audiences new things about themselves and their lives (and not about how camera tricks operate), and which actually require some knowledge about life (and not about how camera tricks operate) to understand.

To the horrors and consternations of films journalists everywhere who are completely uninterested in emotions and learning about them (and anything other than shallow technical tricks as shortcuts to them, instantly telling viewers how to feel), they are termed “uncinematic merely filmed theatre.”

It is hence more than befitting that a film as preoccupied with bestowing upon its audiences genuinely intense (rather than simplistic or easily and instantly-manufactured and understandable) emotions as “Dancer in the Dark” should open with what is a reference to a classical (i.e. bodily/facially/verbally- rather than technically-based) artform; namely, a stage where a musical rehearsal, with the participation of Selma and some of her friends, takes place.

Further down we shall deal with how the film’s interrogation of the common man’s art-creating ability serves both as an affirmation of human agency and as a deconstruction of Hollywood’s fantasies and mythmaking. Suffice it to say, now, that von Trier’s attempt to bestow upon his audiences an actual experience of Selma’s suffering through body and face, rather than a technically-based and easily understandable shortcut to it, is evident and apparent early on.

We first encounter the early signs of Selma’s community of turning against her, namely those signs of social isolation and the rejections she encounters due to her condition (more on that soon), during this rehearsal scene.

2. Its Negotiating of Sex Differences Underscores How Both Sexes Abuse Each Other and Ultimately Become Their Own Undertakers 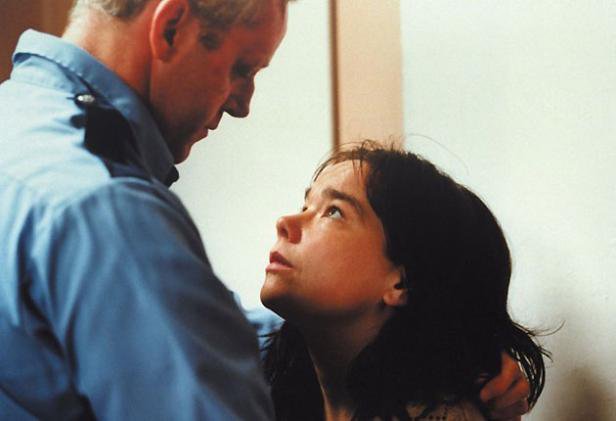 Soon, Jeff (Peter Stormare), one of Selma’s neighbors (and her shy suitor, whom she largely rejects), discovers that she has all but completely lost her eyesight. Neighbor and landlord Bill (David Morse) reveals to Selma that his wife Linda (Cara Seymour) spends more than his salary, and, to comfort him, Selma reveals her condition, only for him to hide in the corner of her house, knowing she cannot see him, abusing her kindness, good heart, naïveté, and hospitality, watching as she puts aside some money to pay for an operation that will prevent her son, Gene Ježek (Vladica Kostic), from losing his eyesight due to this hereditary condition (otherwise, she is very poor and cannot even buy him presents), in her kitchen tin, as we witness a verbally/vocally-, facially-, tonally-, and bodily-based (rather than technically-based) continuation of this film’s interrogation of her suffering and ostracism.

Selma soon lost her factory job due to her deteriorating eyesight. To make matters worse, she found out that Bill sneaked into her house and stole all her savings. Her estrangement from her community continues, exemplified, memorably, in a scene where her best friend Kathy/Cvalda (Catherine Deneuve) attempts to explain film scenes to her in a theatre (as she cannot see them), only to be rebuffed by an oblivious patron.

3. Its Usages of Music Remain Amongst the Greatest Deconstructions of the Hollywood Dream/Fantasy Machine and How It Entraps Us 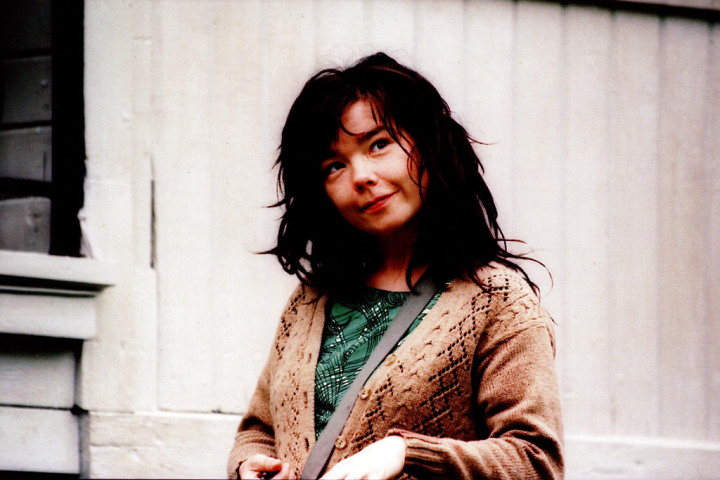 As a verbally/vocally-, facially-, tonally-, and bodily-based (rather than technically-based) film, “Dancer in the Dark” uses music (and dance) not just as part of a whole attempt to refocus cinema on acting, language, dialogue, the face, and the body’s shifts and turns (thus affirming man’s agency), but also to deride and satirize Hollywood’s “cinematic gaze, devices, tools, language, and expression” escapist mythmaking.

Just before she is fired, Selma sings the first song in this film (“Cvalda”):

“Clatter, crash, clack! / Racket, bang, thump! / Rattle, clang, crack, thud, whack, bam! / It’s music! / Now dance! / Listen, Cvalda / You’re the dancer / You’ve got the sparkle in your eyes / Look at me, entrancer! / The clatter-machines / They greet you and say: / We tap out a rhythm and sweep you away! / A clatter-machine / What a magical sound! / A room full of noises / That spins you around / Darling Selma / Look who’s dancing / Faster than a shooting star! / Cvalda’s here! / Cvalda sings”

(All songs in this film were written jointly by von Trier and Björk, and the entire soundtrack is available on an album titled Selmasongs: Music From the Motion Picture Soundtrack “Dancer in the Dark” released in 2000 by London-based label One Little Indian Records)

The second song (“I’ve Seen It All”) occurs while Jeff discovers her condition:

When Selma discovers Bill’s larceny, she confronts him and attempts to take the money back. He draws a gun on her, though in the resulting struggle she manages to retrieve the gun from him, shoot him, and recuperate the money. A fantasy musical number satirizing Hollywood then appears and is the third song (“ScatterHeart”):

“Black night is falling / The sun is gone to bed / The innocent are dreaming / As you should, sleepy-head / Sleepy-head, sleepy-head: / All the love above / I send into you / Comfort and protection / I’ll watch over you / But don’t ask me / What’s gonna happen next / I know the future / I’d love to lead you the way / Just to make it easier on you / You are gonna have to find out for yourself / My Dearest Scatterheart / There is comfort / Right in the eye / Of the hurricane / Just to make it easier on you / All the hurt in the world / You know / There’s nothing I’d love to do more / Than spare you from that burden / It’s gonna be hard / If I only could / Shelter you / From that pain”

Selma is sentenced to death by a court framing her not as a victim, but as a murderess (and as a “communist”). The simple-minded Selma cannot properly defend herself in court, and her lack of financial means means that she wound up with a court-mandated lawyer who’s unable to help her much. The actual experience of Selma’s suffering viewed through body and face, rather than a technically-based easily-understandable shortcut to it, is emphasized. The scene is also framed as an escapist-fantastique musical number satirizing Hollywood’s happy-ending formulas (“In the Musicals”):