6. Looney Tunes: Back in Action 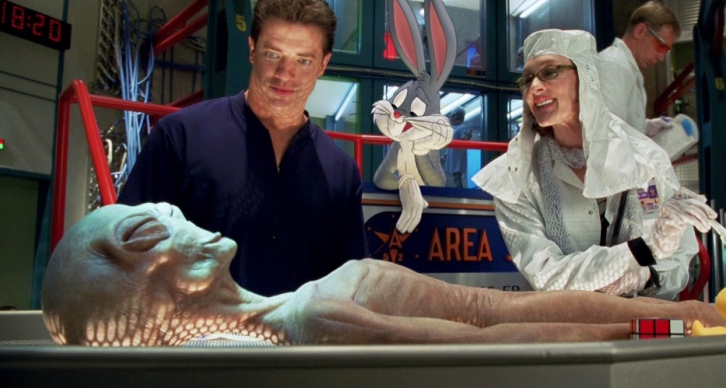 The follow-up to the overhyped disaster Space Jam, Looney Tunes: Back in Action is not a film that film critics were predisposed to like. Its very title sounds stupid. Director Joe Dante, who has always had a penchant for Looney Tunes-style humor (see the Gremlins films, The Twilight Zone: The Movie) gives the characters the witty material deserves, and they hilariously parody everything from 1950’s sci-fi films to James Bond villains to Alfred Hitchcock’s Psycho.

The best moment is when Elmer Fudd chases Bugs Bunny and Daffy Duck through the Louvre, and the three of them jump in and out of famous paintings, adapting their looks to the art styles of great artists. The sequence where they jump into Salvador Dali’s The Persistence of Memory is glorious, and captures the spirits of both Chuck Jones, lover of high art and Salvador Dali, lover of popular culture, in a way that mothing else could.

It also included some nice little jabs at the way the world has changed since the Looney Tunes’ heyday. Characters comment on how modern audiences react to Bugs cross-dressing and the very existence of Speedy Gonzales in a way that they did not in the 1940’s. It’s a picture cleverer than most Hollywood features, especially Hollywood family films. The public kindly rewarded it for this by making it one of the biggest bombs of its year.

I don’t recommend that you watch Irreversible. At least, not if you’re squeamish. Gaspar Noe’s polarizing 2002 feature is one of the most brutally violent movies ever made. There are plenty of bloody films out there to be sure but what separates Irreversible from the splatter films out there is the fact that its violence feels real in a way that the larger than life gore antics of Eli Roth and Sam Raimi never do.

With its ugly color palette, use of extreme and low frequency sound, and brutal storyline, the film is an assault on our eyes, ears, and sense of decency – and that’s precisely the point. It’s the most fully realized exploration of evil that cinema has yet produced.

Opening with a horrific blunt trauma murder in a nightclub, the story of Irreversible is a series of thirteen scenes told in reverse chronological order. The killer shown in the first scene initially appears to be an animal to us, repulsive, subhuman. But as the film progresses, we learn what drove him to become this way. He did not spring forth as a fully formed demon from the depths of hell. Rather, he was formed slowly but surely by circumstances beyond his control. Villains having tragic backstories is nothing new but what makes Irreversible brilliant is the way that the story is told.

The sequencing of the narrator forces us to slowly, often painfully, begin to reconsider our first impressions of this situation. We realize that we too may have made similar decisions if put into the situation of the film’s villain, who progresses into a protagonist as the film treads back, boat again the current, ceaselessly back into the past. The role of chance in forming evil is explored more fruitfully here than in any other film.

By telling the story this way, we dread decisions that characters make, knowing that as innocuous as they seem, they lead to disastrous consequences. Upon its release, critics were so appalled by the film’s violence that they panned it. We can only hope that this film will one day experience a critical renaissance. Would that challenge Noe’s bleak view of humanity?

Released during a time when every major studio was looking for the next Harry Potter, Stardust did well enough with critics and audiences, but has been forgotten over the past decade. A shame, given that it’s one of the most charming films of the post – Lord of the Rings fantasy boom.

We get the usual portals between worlds, evil witches and transvestite pirates but what really sets the film apart is that it’s one of the few fantasy romance films out there where the audience actually gets to see a couple convincingly and slowly fall in love.

As much as the Walt Disney’s formula of a couple dancing together once and realizing that they were meant for each other works for children’s fables, it’s nice to see a romantic fantasy aimed for an older set. It also doesn’t hurt that talented actors like Robert DeNiro and Michelle Pfeiffer populate the film, playing their roles seriously enough that we can get invested in its world but humorously enough to be charming.

Bob Clark’s Black Christmas has it all: ingenious horror mise en scène, creepy restraint, and a snappy title. The problem was that it was released only ten days after The Texas Chain Saw Massacre, a slasher classic with even more ingenious horror mise en scène, creepier restraint and a snappier title. That doesn’t change the fact that Clark crafted a wonderful film with a twist that’s still novel forty five years since: the villain is never seen and his motives are never explained.

The partial glimpses we get of him and the mumbling, cryptic snippets of his dialogue that we hear tap into a fear of the unknown often left unexplored in modern horror. The fact that most of his scenes are shot from his perspective makes him appear almost omniscient, and this visual power disparity makes the film’s suspense almost unbearable.

Black Christmas also features another interesting idea that most subsequent slashers did not bother to copy: it develops its characters. Olivia Hussey’s Jess Bradford is neither one of the pure maidens of Gothic fiction nor one of the empowered heroines of later horror. The fact that she is not a male feminist or antifeminist fantasy makes her feels more real than most movie characters.

The film’s theme of motherhood gives its perversion of Yuletide cheer a greater bite than any of Tim Burton’s Christmas movies. Like the ominous cover of “Silent Night” than plays over the film’s opening credits, something is not quite right about this film. Something haunting. Something that lingers.

David Lynch’s Lost Highway makes perfect sense. It just has to be read under a microscope. What turns most people off about this film is how impenetrable it appears to be, but the film is easier to read if it is understood as a musical. Misogyny is one of the most prominent themes in film noir, and no film noir explores it more brutally than Lost Highway.

The story of a man who murders his wife and turns into another man only to revert back to his old self is really about a man rejecting misogyny only to return to it the moment he realizes he cannot own a woman body and soul.

Lynch’s use of a soundtrack by classic rock legends (David Bowie, Lou Reed) and alt-rock superstars (Marilyn Manson, Nine Inch Nails) was seen by some as a sell-out move, but the true meaning of the film can only be understood if the film’s songs are read closely. In them, we see the horrid tale of a man unable to escape, a man who makes the same mistakes again and again, riding the same lost highway into oblivion. And “This Magic Moment” is a pretty rockin’ tune.