Two women, dance student Alicia and matador Lydia, lie in a coma in the same hospital. Two men, Benigno and Marco, revolve around them and bond over their similar fate. However, Marco finds out that Lydia, his lover, was planning to abandon him for el Nino, her former love interest, before her accident happened ; consequently, he leaves her side.

Marco, on the other hand, who has been in love with Alicia well before she was run down by a car, treats the young woman as if she was capable of interacting with him. Therefore, when it is found out that Alicia was raped and is expecting a child, Marco is accused of the deed and is imprisoned.

In order to gain further understanding of Pedro Almodovar’s work, one should read Mario Vargas Llosa’s novel “Aunt Julia and the scriptwriter”. One of the story lines of the book follows Pedro Camacho, a Bolivian scriptwriter of radio “novelas” (the ancestors of the famous Latin-American “telenovelas” or soap-operas).

His stories are preposterous, blending social clichés with tragic love affairs and spectacular twists of fate and nourish on taboo subjects (many related to sexual practices) without getting embarrassed with subtle psychology. However, Llosa’s Pedro Camacho is an artist in the sense that he infuses his writings with passion and the utmost sincerity.

Pedro Almodovar is a sort of post-modern creator of “telenovelas”: he is clearly inspired by the genre, yet his oeuvre also oozes ironical distance from its source material. Besides the overblown situations, the story of “Talk to Her” is also problematic because of the sympathy it tries to elicit for a man who, unhinged as he may be, is ultimately a rapist. But, if one is willing to overlook the moral ambiguity, “Talk to her” is an intense film magnified by Almodovar’s vibrant signature color palette and graced with delicate performances.

Two young men who both go by the name of Gerry decide to hike at a site fittingly called “The Wilderness Trail” in a desert that is probably the Death Valley. They plan to have a leisurely walk and then go back to their car, but they soon realize they are incapable of finding their way back. At the beginning of their ordeal, they throw in all their resourcefulness; but soon enough, they abandon all other methods except walking straight ahead without exchanging a single word.

Gus van Sant’s “Gerry” is an appropriate example of a film whose plot deceived an important part of its audience (critic Roger Ebert describes in his review that when he saw the film at the 2002 Sundance Film Festival, approximately half the spectators walked out before the ending) because of a confounding reason: it resembled real life too well.

Many types of realism, some more extreme than others, have paraded on the silver screen since the invention of cinema. One could think that by the 2000s the audience would have adjusted to unspectacular plots, ordinary characters and cinematic time that tries to reproduce the impression of real time through the pacing of the film and the length of individual shots.

Gus van Sant’s imprudence was to apply this treatment to an event (getting lost in the desert) that, first of all, was canonized by an enormous number of cinematic representations and, secondly, that most spectators had never experienced personally and were therefore forced to forge their perceptions of based on films or other types of fictional narratives.

Due to these reasons, the plot of “Gerry” seems drab; but what would be a fault in most films is actually a strength in the case of van Sant’s film. The vague boredom, the ritualistic repetitiveness, the flat wasteland, the mesmeric camera movements all successfully mimic the experience of completely losing one’s way. 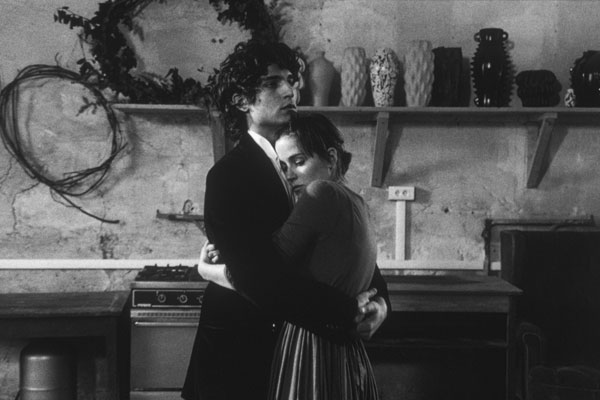 François, a young photographer, falls in love with Carole, an actress, during a photo shoot in her vast Parisian apartment. The two begin an affair which is complicated by Carole’s mental fragility and by the fact that she is married, albeit to an artist who is away most of the time.

When Francois must escape in extremis from their love nest due to the unexpected arrival of the husband, he chooses to disappear from Carole’s life. The young woman descends into alcoholism and eventually kills herself. Her ghost comes to haunt François who is now engaged to Eve. The apparitions become more frequent as the marriage plans take shape.

The plot of “Frontier of the Dawn” is quite uncommon for an art film and director Philippe Garrel certainly doesn’t cumber himself with the task of clarifying the exact nature of François’ visions (are they hallucinations? the expression of his guilt-ridden conscience? or is the film making an incursion into the supernatural at the middle of its runtime?). Carole’s ghost is treated straight-forwardly and its appearance in place of François’ reflection in the mirror reminds one of silent films and of their crude tricks.

Despite the initial amusement this method provokes, it becomes quickly fascinating to observe how the supernatural elements blend with Garrel’s distinctive minutiose scrutiny of human behavior. It is quite a treat to watch how actor Louis Garrel, following the director’s instruction, applies himself to the task of realistically rendering a man’s emotional reaction to seeing his dead lover’s spectre.

Otherwise, “Frontier of Dawn” has all the characteristics that make Philippe Garrel’s languid oeuvre one of the most hypnotizing offerings of French cinema: the aching closeness to the actors’ faces and bodies, the pared-down visual style, the atemporal fictional universe, the autobiographical touches, etc.

At the end of the 19h century, Mattie Ross, a hard-as-nails fourteen year-old girl sets out to revenge her father’s death at the hands of a drifter named Tom Chaney. While collecting her father’s remains, Mattie finds out that the murderer has escaped in Indian territory; therefore, she employs Marshal Rooster Cogburn who reluctantly agrees to catch the fugitive. But Tom Chaney’s pursuit is also Texas Ranger Laboeuf’s mission, albeit for a different crime. After many disputes, Mattie and Cogburn part ways with Labeouf, only to be reunited when all three are closing in on the runaway.

The premise of the Coen Brothers’ film (which is actually the premise of Charles Portis 1968 homonymous novel) is not uninteresting, as it places a female character at the core of an essentially patriarchal genre.

As if her gender wouldn’t be enough of an obstacle, Mattie is also a child; therefore, she will be forced to demonstrate her worth under the gaze of her two uncompromising partners as well as to cope with the dangers such a chase as the one she has embarked on naturally implies. All these are the classic elements of an excellent bildungsroman; however, the story is easy to fault due to its excessive use of coincidences and of last-minute returns of fate.

If Rooster Cogburn is trigger-happy, one could say that the Coen Brothers’ film certainly is “twist-happy”. Some have attributed this to the brothers’ desire to respect classic western tropes; others have claimed that the two film-makers didn’t wish to depart from their source material; and yet others saw it as an instance of lazy storytelling.

In any way, there are plenty of delights in “True Grit”, as in all Coen Brothers’ films, from colorful supporting characters to evocative cinematography and delectable dialogues that overshadow the predictable plot.

If he does not succeed in the limited period of time that is given to him, he is to be transformed into an animal of his choice and banished to the nearby woods. But as under any authoritarian rule, resistance movements take shape: groups of single people inhabit the woods and sometimes raid the hotel. David joins them only to discover he has to face another type of dictatorship: among the rebels, love is forbidden.

Yorgos Lathimos’ “The Lobster” certainly has the most divisive premise from the films on this list. One is either intrigued by its otherworldliness and by the twist it brings to the threadbare dystopian fiction genre or one finds it utterly laughable, nothing more than a ridiculous turn-on-its-head interpretation of the old fairy tale with the prince transformed into a toad.

It is obvious that, if the story would have been entrusted to a less gifted director, the result would have been catastrophic. But Lanthimos doesn’t shy away from bringing out the heavy artillery and from the first images of the film, the audience realizes that they are not watching a quirky romantic comedy, but a Greek tragedy spiced up with bursts of absurd humor.

Beyond the pastel facade, violent instincts are lurking. All dystopias are in fact nothing more than an exaggeration of certain tendencies of contemporary society; “The Lobster” witnesses to the fertility crisis in developed societies and to its contradictory results: the retreat towards traditional values or the exacerbation of individualism. The hotel staff and the rebels both represent one of these extremes, while Colin Farrell and Rachel Weisz, with their ordinary looks and muted costumes, are the embodiment of the everyday man who helplessly searches for balance.