Violence has existed in cinema since the beginning, and real life violence definitely predates movies. Still, films have often been blamed for glorifying violence. In some cases, the film in question isn’t even as bloody as it seems, or is censored because its context isn’t properly understood.

Many films are no bloodier than Shakespeare but are simply hated by critics, who emphasize their violence just to trash them. More broadly, people forget that they are only movies. In any case, here are ten watchable to great films which have been unfairly dismissed as too violent. 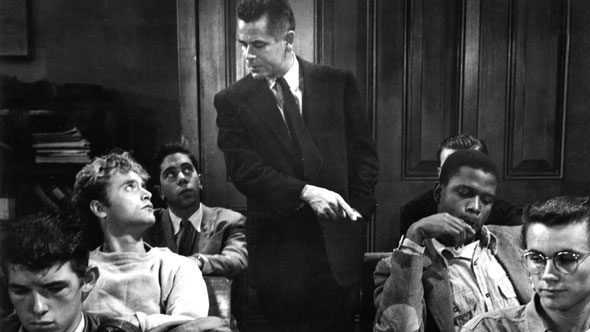 Directed by Richard Brooks, “Blackboard Jungle” stars Glenn Ford as a new teacher at a poor, inner-city school. Tensions are definitely raised, and some of the movie certainly involves violence. However, the outrage at “Blackboard Jungle” was more a product of its age.

In 1955, the mere presence of Sidney Poitier on screen was considered controversial, due to racism. In fact, Rock ‘n Roll music in general was considered outrageous then (something people tend to forget). Some screenings actually didn’t play the movie’s opening theme, “Rock Around the Clock” by Bill Haley & His Comets! Why? Rock and Roll was considered as controversial as the violence.

The film was banned outright in Memphis, Tennessee and Atlanta, Georgia. Why? As The Atlanta Review Board put it: “[Blackboard Jungle is] immoral, obscene, licentious and will adversely affect the peace, health, morals and good order of the city.”

Still, it sounds like the peace, health, morals and good order were already adversely affected in these areas — as such censorship exemplifies. The controversy seems silly today, especially when watching the relatively tame movie. It wasn’t silly then, though.

Directed by Howard Hawks, 1932’s Scarface was — and still is — a tour de force film, depicting the ravages of the gangster lifestyle. Paul Muni does a great job as Tony Camonte — who is based in real-life gangster Al Capone. Regardless of its greatness, the censors tore it to shreds. Will Hays, chairman of the Motion Pictures Producers and Distributors of America, constantly demanded script rewrites.

The film had to include an introductory condemnation of Gangsterism, and they even tried to change the movie’s title. Hawks had to add scenes where characters criticized government for lack of action against crime. As a result, the film has more hokey and preachy moments, and these moments seem forced (because they were). So, if you’re wondering why Scarface has such a conformist message, now you know.

Does Scarface depict violence? Sure, but so did other movies by this point. More importantly, would the film have glorified Al Capone’s lifestyle, without all the added preaching? No. Scarface is not depicted as a good guy, or as someone with a great life. In fact, the whole point of the movie is his fall, which is not graceful. On top of that, the real Al Capone was already in trouble by the time this film was released. This makes the preaching even less relevant.

In Quentin Tarantino’s Inglourious Basterds, Nazis are killed. More technically happens in the movie, sure, but the focus is on Jews taking revenge on Nazis. It’s a violent response to a violent regime.

Still, some critics, like Liel Leibovitz found it to be too immoral, or too amoral. Leibovitz argued, “The desire to turn film into a literal, blunt instrument of revenge drains it of the terrific power it has as a sharp and precise tool with which to cut through myopia, forgetfulness, ignorance, and denial.” (SOURCE)

Similarly, Jon Richards says, “This is a movie that thinks cold-blooded brutality and torture are not necessary evils, or excesses spawned in the heat of battle, but the very epitome of cool. It’s a celebration of the most bestial kind of toughness in the name of us-vs-them entitlement.” (SOURCE)

There’s one little problem, though: Revenge is appealing! That’s one reason people do it. For Tarantino (or anyone else) to deny that is absurd. If a person feels justified and “cool” with revenge, they are more likely to do it.

So, if you’re telling a story where people will execute revenge, the characters won’t necessarily have moral qualms about it. In truth, that aspect of “Inglourious Basterds” is probably the most realistic part. Films don’t have to be arbiters of absolutist morality, and these characters are not pacifists.

It’s seldom remembered, but “Child’s Play 3” was a rather controversial movie at one point. In fact, some people in the UK blamed it for two murders: That of James Bulger in 1993 and Suzanne Capper one year earlier. Why was Chucky blamed for Bulger’s death? A month before the murder, one of the 10 year old murderer’s fathers had rented Child’s Play 3.

Also, the boys who killed the toddler had splashed some blue paint into his right eye, which some considered similar to a scene in Child’s Play 3. Specifically,there’s a scene where Chucky replaces blue paint bullets with live rounds at a boot camp’s “War Games” event.

Later in the movie, Chucky abducts a child cadet and brings him to a haunted house where there are “train tracks” for the ride’s cars, intending to transfer his soul into the kid’s body. Well, as turns out, Bulger’s body was found near some train tracks. While it could be coincidence, some thought this movie — which the British called a “video nasty” — was the big trigger (as opposed to any sort of family problem). (SOURCE)

In fact, the murder inspired John Major to say one of the most totalitarian things ever: “We must condemn a little more, and understand a little less.” (SOURCE) (SOURCE)

As for the Suzanne Capper controversy, people believed her kidnappers and torturers — 5 adults and one juvenile — were inspired by Chucky. As she sat in a bathtub and they tortured her, they would often taunt her by playing a rave song featuring samples of Chucky’s voice. The media was trying to link both crimes to “Child’s Play 3,” with the belief that, if we’d just get rid of depictions of violence, real violence would be reduced.

Of course, most people who watch films depicting violence don’t do such things, but a moral panic is just too busy panicking. Most people don’t think about “Child’s Play 3” much anymore, which implies something about its supposed power to enchant and cause harm.

Plenty of people like “The Terminator,” considering it a sci-fi action powerhouse, and one of the first prominent roles for Arnold Schwarzennegar. However, it was not without controversy. The Newhouse News Service called it a “lurid, violent, pretentious piece of claptrap”. (SOURCE)

Not to be outdone, UK novelist and critic Gilbert Adair ramped up his criticism. Adair called the film “repellent to the last degree,” accusing it of “insidious Nazification.” He said it had an “appeal rooted in an unholy compound of fascism, fashion and fascination.” (SOURCE: Andrews, Nigel (1995). True Myths: The Life and Times of Arnold Schwarzenegger. London: Bloomsbury. p. 137.)

Is “The Terminator” really that bad, though? Where does the Nazi stuff come from? If anything, the film warns about the dangers of technocratic elites, and exaggerates the deadly potential of technology and unrestrained futurism.

As anyone knows, this flies in the face of fascism, which often flirted with “futurist” ideas. Indeed, Nazis would have been the first to take credit for any technological innovation. Even if they hadn’t invented it themselves, they’d be at the front lines to claim it as their own invention.

In other words, there’s nothing inherently pro-fascist about “The Terminator.” Nor is it a particularly pro-war or pro-violence movie. Sure, it can be accused of given mixed messages. Arnold is depicted as pretty cool, and the Terminator machines themselves are “bad-ass,” and warfare and explosions are part of the action. Still, it’s a bit unfair to call “The Terminator” anything beyond what it is — a 1980s action movie that depicted violence in a fashion that’s actually pretty unrealistic, and in many ways cautionary.