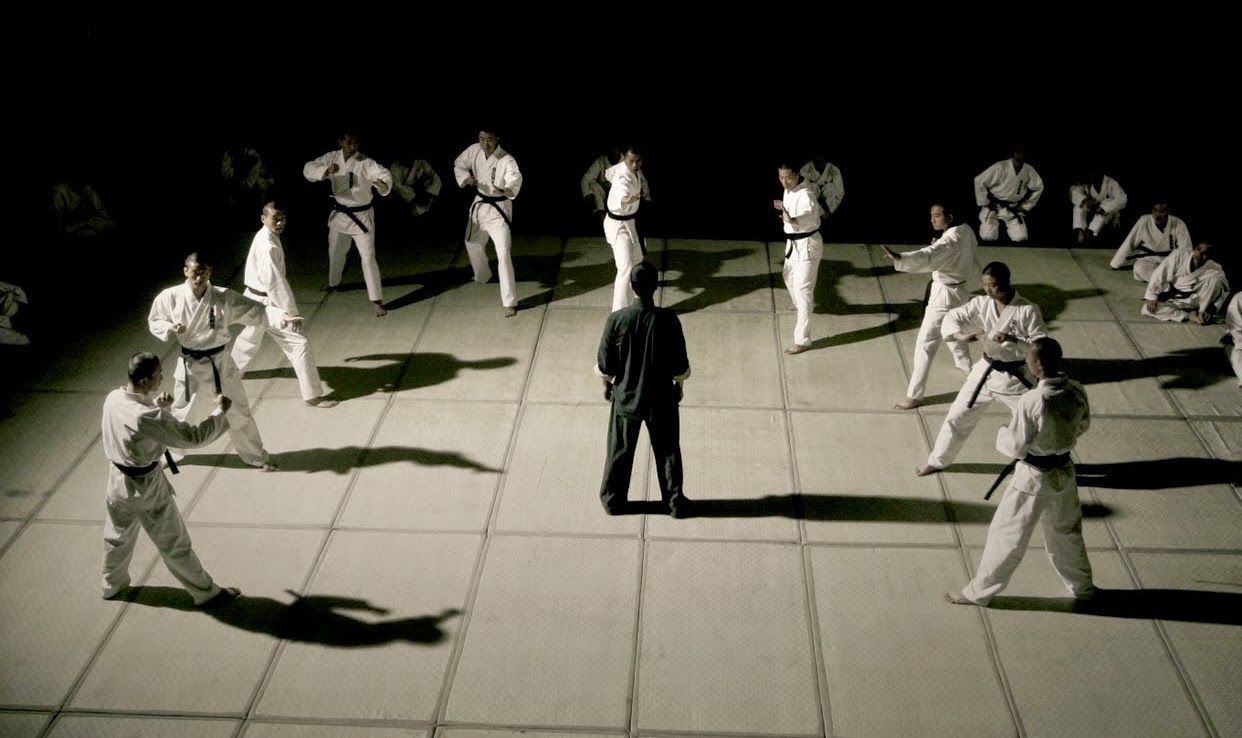 This list could have easily been occupied by several Ip Man fights: his duel against a Japanese General, the fish market fight, the Boxing match against Twister, the duel against Mike Tyson or his final fight against his fellow Wing Chun practitioner are just some examples. However, the fight that still remains the highlight of the series was his battle against 10 black belts in the original. The reason for this: the emotion.

Ip Man’s style of fighting, Wing Chun Kung Fu, is best described as fluid, eclectic and even gentle. While his opponents grow frustrated and angry, Ip Man’s ability to remain calm and gentle is what sets him apart. This all changes following the death of his friend. After invading China, the army challenges local martial artists to fight against the best from Japan. When his friend is gunned down after failing to beat three fighters, Ip Man steps forward with a challenge that grabs everyone’s attention: 10 fighters.

Ip Man’s style changes dramatically. He is no longer toying with his opponents. Instead, we see him brutally cut down each opponent. One has his neck stomped on, another has his arm snapped in half and, in a cringe inducing moment, another has his leg dislocated from his hip.

The rest are brought down by rapid chain punches. While the scene contains solid choreography and cinematography, the one thing that elevates it above the others is anger expressed by Ip Man. Fight scenes are only as powerful as the emotions expressed by the characters. This is the first (and currently only) time we have seen Ip Man truly angry and his response is devastating.

Former professional kickboxer Benny ‘The Jet’ Urquidez has twice appeared in a Jackie Chan film and both times played a nameless henchmen, yet he remains one of Chan’s greatest adversaries. Dragons Forever showcased a great fight between the two but it is nothing compared to the showdown between the two in Wheels on Meals.

After the heroes arrive at a castle to rescue Sylvia, a young woman with a sizeable inheritance, the trio must fight off various henchman. As for Thomas (Chan), he encounters the much more skilled henchman, played by Urquidez. While Chan shows off his acrobatics, creatively dodging attack, Urquidez shows off his kickboxing moves including, in one scene, a kick that is so swift that it extinguishes a set of candles. No camera tricks, just Urquidez’s skills on display.

Wheels on Meals is another example of Chan taking risks by moving away from the acrobatic, Buster Keaton inspired stunt fights and more towards one on one bouts.

This spot could easily go to the continuous one shot fight scene in the restaurant which follows Thai elephant keeper Kham (Tony Jaa) as he ascends a staircase while dispatching multiple henchmen, including one who is thrown over a railing and dropped two stories into a Kkiosk. But despite creating the martial arts equivalent of the Hard Boiled shootout, the real game changer was the final fight between Kham and fifty henchman.

Kham had come to Australia to track down his two elephants, stolen by poachers. Finally tracking down those responsible, he discovers that the older of the two elephants has been killed and her skeleton is on display. Devastated by the sight (flashback revealing his close relationship with the elephant as a child), Kham breaks down until a rogue henchman plunges a knife into his gut, triggering what could be considered the angriest protagonist in action cinema history.

Utilising a mixture of Taekwondo, Aikido and unique form of Muay Thai/Boran inspired by elephant fighting tactics, Kham cripples multiple henchman. Knee caps, ankles, shoulders, wrists, fingers and necks are all snapped as Jaa delivers one of the most painful beatdowns ever witnessed.

Despite being credited with introducing audiences to several talented film martial artists including John Foo, Johnny Tri Nguyen, Lateef Crowder and Nathan Jones, it is Jaa’s showdown with a team of nameless henchmen that stands tall. 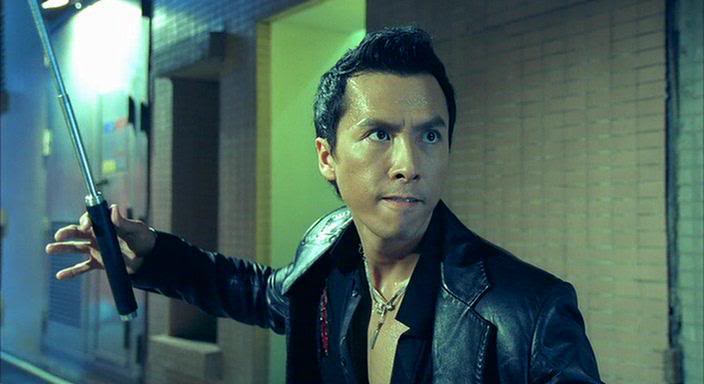 After returning from Hollywood to Hong Kong, Donnie Yen slowly introduced Mixed Martial Arts into Hong Kong cinema, utilising it against the likes of Sammo Hung, Colin Chou and Andy On. However, it was during this period that he also created one of his most traditional yet incredible fight scenes. Not only is it a visual masterpiece, it was mostly improvised by the film’s two stars: Yen and Jacky Wu.

The build up is simple. Police officer Ma Kwan must confront a mob boss and return stolen money. However, before he arrives, he runs into mob assassin Jack, responsible for the murders of several police officers. Jack is armed with a small sword, Kwan with a police baton, perfect weapons as the pair go swinging.

Hero in black, villain in white, neon lights and plenty of blood, director Wilson Yip knows how to set up a beautiful scene but when it comes down to a fight, he leaves it in the trusting hands of his choreographers, even if they are make it up as they go.

There have many interpretations of the great fictional Chinese hero, Chen Zhen. Bruce Lee did it first, as has Donnie Yen and most recently Jordan Chan. This film however, not only catapulted star Jet Li and choreographer Yuen Woo-ping to international attention, it also produced one of the finest fight scenes out of contemporary Hong Kong cinema.

Following the death of his teacher at the hands of a Japanese master, Chen Zhen believes there is a conspiracy involving a Japanese General eager to embarrass the Chinese. After exposing him, Zhen confronts Fujita at a dojo.

Li was a national champion in Wushu while Billy Chow, playing Fujita, was a champion kickboxer. The obvious size difference between the two, the differing styles and the use of location all morph together to create a 15-minute fight scene that never loses momentum.

The Wachowski’s owe a lot to Hong Kong cinema, especially a number of films on this list. Despite only having one screenplay (Assassins) and one directorial work (Bound) between them, Warner Bros. pushed ahead with the ambitious project that combined aspects of philosophy, fairy tale, hard sci-fi and of course martial arts cinema.

Many scenes changed Hollywood forever. The lobby gunfight, the helicopter shootout, Trinity’s escape across rooftops and the iconic bullet time sequence all stand out as solid pieces of cinema. However, in terms of fight scenes, the train station duel between Neo and Agent Smith brings out the very best of Hollywood action cinema. Having destroyed Neo’s only route of escape, the pair face off with the constant danger of passing trains only mere feet away.

Hollywood has a history of taking untrained actors and throwing them into highly ambitious fights. However, under the tutelage of legendary choreographer and wire-fu expert Yuen Woo-ping, stars Keanu Reeves and Hugo Weaving carry themselves as warriors in this fight scenes delivering blows that are not only brutal, but beautifully performed.

The Wachowski’s never followed The Matrix with anything near as impactful. The sequels were derided and their work on Speed Racer and Jupiter Ascending was disappointing. However, the original still stands as one of the most daring science fiction films made since the original Star Wars. 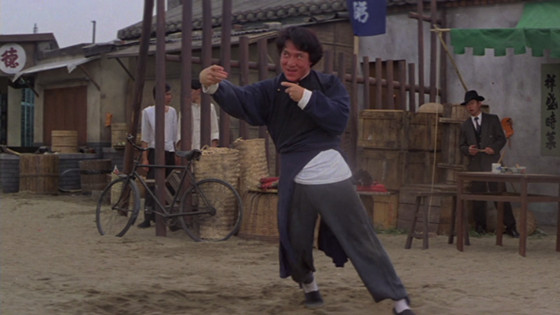 Jackie Chan’s career dates back to the early 1960’s. For an actor, that is impressive. But for a stunt man and martial artist, it is truly awe-inspiring. Having started his career as an extra and stunt double (including a brief beatdown from Bruce Lee in Enter the Dragon), Chan moved onto leading roles in action comedies. One of these early films was Drunken Master (1978), which introduced the world to Chan’s blend of action and comedy as well as the unique fighting style known as Drunken Boxing.

However, it would take nearly a quarter of a century for Chan to return to the role Wong Fei-hung in the sequel that delivers arguably Chan’s best fight scene. Chan was already 40 years old when he shot this film but clearly, he does not let his age slow him down or let him second-guess some risky stunts. At one point, he is kicked off a ledge and lands on a bed of coals. No tricks. However, after dealing with various henchmen, Wong confronts John, a well-dressed villain with some incredible moves.

Ken Lo, who plays John, was Jackie Chan’s actual bodyguard and his moves on screen have yet to replicated by anyone. A flurry of kicks quickly keeps Wong at bay until he consumes an excessive amount of alcohol. Not only is this fight scene thrilling and daring, it is also a lot of fun. Chan’s mixture of skill and humour make this a fight scene to watch with a big smile on your face.

It would have never been to right to give the number one spot to anyone other than Bruce Lee. The legend himself is credited with bringing martial arts cinema into the mainstream as well as inspiring an entire generation of martial artists.

Lee, a talented martial artist, is recruited by British intelligence to compete in a martial arts tournament held on a private island belonging to Han (Shih Kien). Lee must determine whether Han is involved in organised crime with the help of gambler Roper (John Saxon) and veteran Williams (Jim Kelly).

While the film also addressed contextual issues for the early 1970’s such as civil rights and decolonisation, Enter the Dragon is still a prime piece of action cinema and storytelling. When Lee and Roper are exposed, Han attempts to have them both killed but the islands prisoners escape, allowing him to face off against Han.

Everything about the final battle is perfect. The hall of mirrors, Han’s claw. All pieces that make up a fight scene that helped establish Lee’s status as a film and martial arts icon.