With the growing popularity South Korean cinema has been enjoying internationally, the transfer of Korean filmmakers to Hollywood was an inevitable action. From the three directors that made the step, Park Chan-wook with “Stoker”, Kim Jee-woon with “The Last Stand”, and Bong Joon-ho with “Snowpiercer”, the latter was the most successful, both artistically and commercially.

With the film featuring an all-star Hollywood cast that resulted in approximately 80 percent of the film being shot in English, and most of the shooting taking place in Prague, the production costs reached $40 million, making “Snowpiercer” the most expensive Korean production ever made.

However, the film would go on to screen at a number of international festivals, winning a plethora of awards and eventually finding distribution all over the world, with its profit at the end of its run reaching the amount of $87 million worldwide.

While the movie now has a Rotten Tomatoes score of 95%, it only received 7/10 rating on IMDB. Here are four reasons that justify why it’s underrated by the audiences. Please note that the article contains many spoilers.

1. Making the most out of an unusual combination 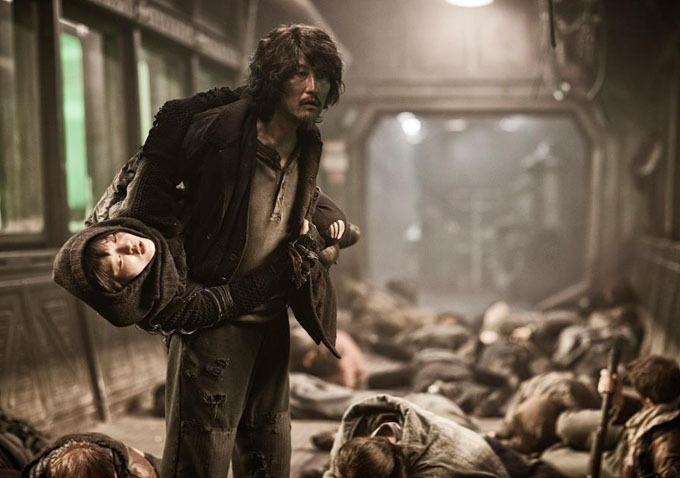 Evidently, a film based on a French graphic novel, namely “Le Transperceneige” by Jacques Lob, Benjamin Legrand, and Jean-Marc Rochette, directed by a Korean director, and featuring an international cast, is not a combination one sees every day. Bong Joon-ho, however, managed to make it all work as he magnificently adapted a deeply meaningful work.

In the not-so-far-off future, humanity makes a last-ditch effort to deal once and for all with the “greenhouse effect.” Unfortunately, the plan completely fails and the planet enters a new ice age, where almost every form of life is extinct.

However, before the catastrophe, a mogul named Wilford manufactured a massive train that has the ability to travel around the world perpetually without being affected by the weather. The last members of humanity are currently living in this train, with the rich ones living in luxury in the front of the train and the poor being cramped in the back, eating protein bars of an unknown source.

Having lived for 17 years in extreme poverty, the inhabitants of the back decide to not tolerate their inhumane living conditions and to revolt in order to move toward the front of the train. They choose Curtis as their leader, who agrees to lead them, albeit reluctantly.

Failed revolts have occurred in the past, but this time, one of the oldest inhabitants of the train, Gilliam, has an idea. Namgoong, a man imprisoned in a cryogenic prison in the train, was one of the vehicle’s manufacturers before he became a drug addict, and knows how to circumvent the complex system that holds the door closed between the cars. By releasing him, they would have many chances to reach the front of the train.

A bit later, and after they realize that the guards Minister Mason is sending against them are not as powerful as they seem, they form a team consisting of Curtis, the released Namgoong and his daughter Yona, Edgar, and Tanya, and proceed to reach the front of the train.

2. Symbolism, allegory and a number of social, political, and financial comments 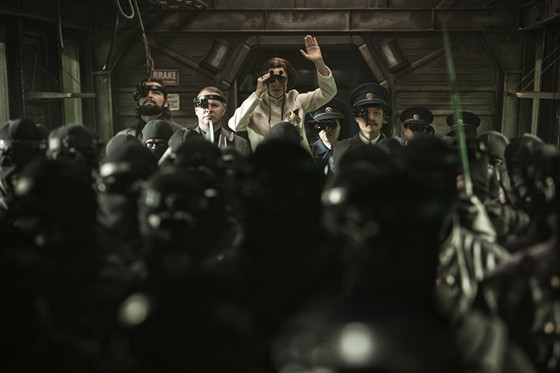 Furthermore, the people in the front consider their place not a privilege but rather a divine guideline, occasionally even stating that their position is not without sacrifices, in an indication of how detached they are from reality.

In that fashion, the “revolution” that ensues is presented as something inevitable, since the circumstances in the back of the train are unbearable. However, as the film reaches its climax, this revolution is revealed to be nothing else than an elaborate process of population control, instigated by the leadership.

Furthermore, the revolutionaries are revealed to be cannibals, as they used to eat their weaker passengers including babies, to the point that some of them started offering their own body parts, in a perverse version of communism.

Despite the fact that the leadership allows revolution, its general practice consists of a number of policies, preventing one that is controllable by those in the back. In that fashion, the leaders first make them think that there is no hope outside of the train and then give them an illusion of choice, freedom, and free will through the idea that they can actually revolt. Secondly, and this time regarding the people in front of the train, intense propaganda is sent out that glorifies Wilford, which begins from the children.

The film deals with class warfare and economic equality, but not in an obvious way. Instead, the whole story is an allegory regarding Darwinian equality. This is presented through Wilford’s words when he speaks to Curtis: “Everyone has their preordained position and everyone is in their place except you.” For Wilford, equality and justice does not matter, since the only thing that matters in this world is survival. In that fashion, he highlights Curtis’s misconception that these two concepts actually exist.

In order for this balance to be achieved, since natural selection is out of the question in the train environment, the only way is through political manipulation, and particularly through the concept of “revolution”, which works for both the people in the front (“the rich”) and in the back (“the poor”).

For the former, it’s in order to provide them with an idea of insecurity that makes them completely dependable on the leadership for their safety. For the latter, it is in order to give them just enough hope and to not let them fall into utter despair, which will make them completely irrational and thus uncontrollable.

Lastly, there is the anarchist point of view, as represented by Namgoong, who provides the “third way”, that of hope. This comes in direct contradiction, which even takes physical form in the film with the fight between Namgoong and Curtis, with both Curtis’s revolution and Wilford’s preordained Status Quo. The Korean does not care to retain the current system or to change the leadership in order to improve the lives of the people in the back, in the same environment the train provides.

Instead, through his observations as presented through the concept that the snow has started melting, he provides a third solution, one that leaves hope in the hands of nature. 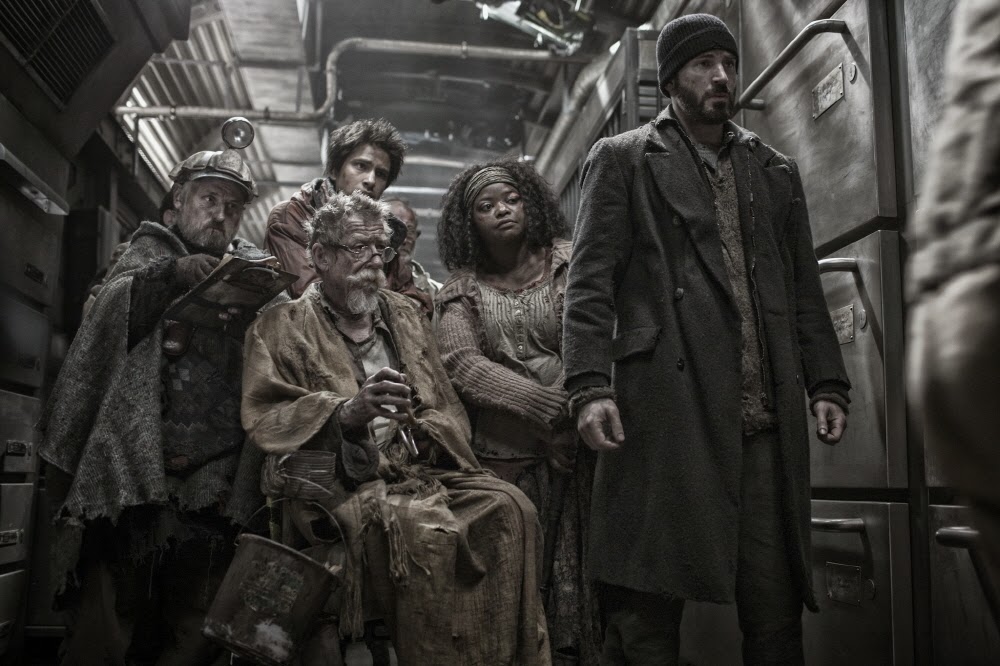 “Snowpiercer” is a technically impressive film, as it benefits the most from its production values. Probably the most outstanding feature of the film is the train itself, with Bong and his team staging the movie on a giant gyroscopic gimbal, which can roll from side to side or bend realistically to give a three-dimensional feel to the train.

Nearly all the shots within the train are filmed so that the tail sections are to the left of the characters onscreen, and the engine to the right. In that way, Bong managed to give the sense that the characters are moving as if they were actually on the train, in an utterly realistic fashion.

The special effects are equally outstanding, both in the outside shots of the frozen dystopia and in the interior of train. This elaborateness finds its apogee in the Aquarium car, which presents the perfect combination of lighting, cinematography, and special effects to present a wagon that features an aquarium on one side and a frozen landscape on the other.

The production design is also elaborate, with the many and different settings in the train highlighting the work done in their particular aspect, as much as the differences between the tail and the front.

All of the film’s technical aspects combine to present the most memorable sequence in the film, the one where the protagonists open the door only to find a number of men with hatchets waiting for them, in a truly impressive action scene. Since Park Chan-wook was among the producers, one cannot help but think that he had something to do with this scene, which seems like a large-scale adaptation of the one in “Oldboy”, where Dae-su is fighting a score of men holding axes.

4. An impressive implementation of an international, all-star cast 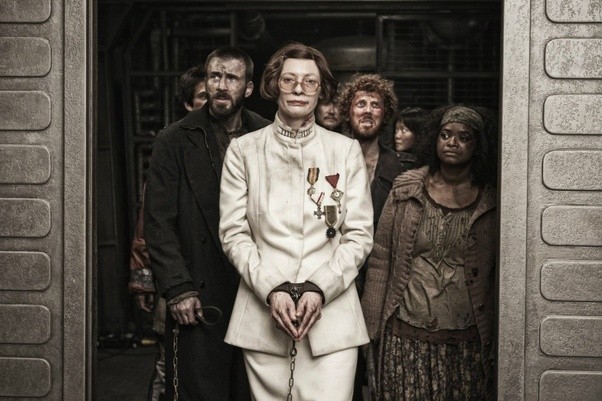 Evidently, one of the film’s greatest assets is its cast, which forms a unique and utterly fruitful amalgam of actors from over the world. In that fashion, Chris Evans plays Curtis, in one of the best roles of his career, despite the relatively laconic part.

The apogee of his performance comes near the end, when he explains his story to Namgoong in a very impressive sequence. South Korean actor Kang Ho-song as Namgoong steals the show, with his ability to present characters that draw laughter even in the direst of situations.

British actress Tilda Swinton, in an almost unrecognizable role, is outstanding as Minister Mason, in a performance that perfectly fits the graphic novel aesthetics of the film. Her monologues are among the highlights of the film.

American actor Ed Harris, despite his brief time on screen, is excellent as always as Wilford, with a monologue of sorts that combines pragmatism with infuriating condescension. British actor John Hurt gives another very dignified performance as Gilliam, and Jamie Bell, another British actor, is as feisty as ever as Edgar, as is the case with American actress Octavia Spencer.