Out of all the inventions of humanity, God is certainly one of the most elusive ones. Since we’ve began to think, we’ve wondered about the meaning of being; we want to know why life exists, why we as individuals exist, and we want to know what is death and if there’s anything after it.

Many philosophers have tackled the issue of God, but we are still far from a definitive answer. There is a sense of awe and amazement underlying in metaphysical investigations, as this is a very rich field for philosophical pondering and experimentation.

The search for meaning for our lives led us to the foundation of several religions and doctrines, all of them set to make us one with God, the divine, the universe, nature, or whatever name they use to encompass the unreachable, to try to understand the system of the world and its secret order.

Here is a selection of 15 films that are eminently spiritual or that examine the human issues with a divine perspective.

The first four films by Chilean director Alejandro Jodorowsky, which he made while living in Mexico City, provide a challenging and haunting encounter with the divine and the scatological. “El Topo”, his second feature film, is divided into two parts.

In the first part, we follow a mystical cowboy, played by Jodorowsky himself, who goes on a quest in the desert to find and kill in a duel the four masters of the revolver; and in the second half, we see him turned into a deity adored by a community of people with congenital deformities, who were expelled from a nearby town due to their ugliness.

Amongst a cacophony of religious and esoteric symbolism, we witness a journey that is common to mankind. Our unlikely hero, who is not casually named after an animal that searches for the sun at the risk of being blinded by its light, is driven by violence and desire, and strives for perfection and divinity.

He goes on to complete a mission, only to experience a downfall just before he achieves it, and he then tries to find redemption and forgiveness, completely oblivious to the catastrophe he’s going to provoke. In the film is embedded a pattern found in life itself; the transit for glory to doom, from happiness to depression, from godly inspiration to mundane instinct, from warm hope to violent outcome.

When “El Topo” was screened in New York, John Lennon was so fascinated by it that he bought the rights to distribute the film in the United States, and he also gave Jodorowsky $1 million so he could make another film.

This film was “La Montaña Sagrada”, or “The Holy Mountain”, an experience that is equally hermetic and visually baroque as it is interesting and mesmerizing. Jodorowsky again plays an important role, this time as an alchemist determined to turn the mundane and infected in the world into something divine and pure.

Photographed by eminent cinematographer Rafael Corkidi, the film’s visuals are stunning and cruel, featuring a bombardment of occult symbology, the understanding of which requires spiritual studies; and poetical imagery, the understanding of which requires the intuition of the unconscious mind; both lead to exhaustion and exhilaration at the same time.

While Jodorowsky chose to end the film in a quite inelegant and anticlimactic manner, the journey has a richness that allows for great contemplation and pondering.

Very few directors are respected the way Tarkovsky is, and there is a reason for that. He was the greatest poet to ever work in cinema; his films are filled with enormous beauty that transcends the mere appearance of the images, leaking into the life of the spectator. He filmed “The Sacrifice”, his final film, in Sweden, while being in exile from his beloved Russia.

With Sven Nykvist as cinematographer and Erland Josephson as the lead actor, this film tells the story of Alexander, a philosopher and former actor who is faced with the end of the world on his birthday.

In Tarkovsky’s world, the end of times does not come with great chaos and crumbling civilizations, but with a metaphysical sense of dread, a careful descent into despair and madness. Alexander communicates with God, and in dreamlike sequences he learns he can bring salvation to the world by seeking help from Maria, a witch whose love can bring peace.

Tarkovsky practically edited this film while lying on his deathbed, and in the story of a man who wishes to use love to save mankind, we can easily see the epitome of everything he believed in and fought for. A testament. 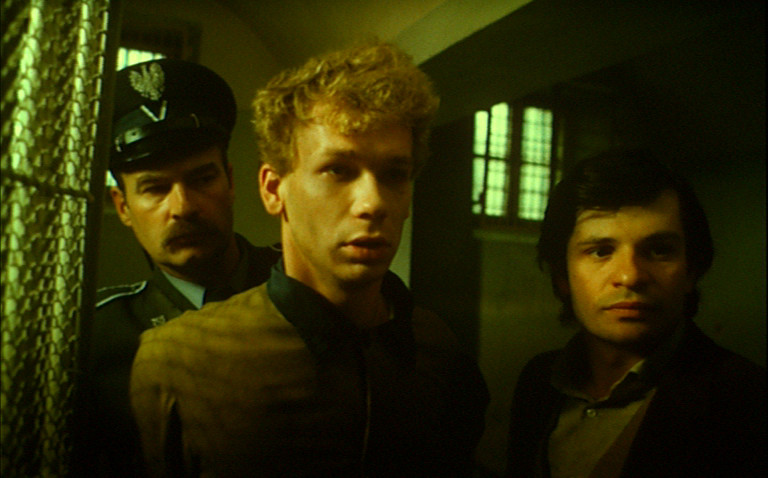 While not a movie, per se, but a miniseries comprising 10 episodes made for Polish television, “The Decalogue” is a beautiful poem in which 10 different stories portray the human condition and the many experiences we might come across in our life; things like love, loss, grief, friendship, compassion, faith, and many more. With every episode being based on one of the 10 commandments, the question of God surfaces constantly.

This film is offered as a sort of mirror in which our lives, in one way or another, can be found. Underneath the particular circumstances in which things develop in everybody’s lives, we can find a common ground, the human experience stripped down to its bare essentials. What Kieślowski’s work does here is to divinize our individuality.

God is portrayed in this 10-hour opus as a quiet observer; he does not interfere with people’s lives, he does not save nor condemn them, and he doesn’t react to their decisions. He just observes the unraveling of their dramas and conflicts.

Bela Tarr’s take on the apocalypse is darker and more pessimistic than Tarkovsky’s. According to the legend on which it is based, German philosopher Friedrich Nietzsche encountered a man whipping his old and tired horse, and at the sight of such violence he rushed to protect the horse, vanishing afterwards. The film, which is Tarr’s final film, starts right after the incident and it gives us a glimpse into the lives of the man, his daughter, and the horse.

Tarr’s apocalypse is beautifully photographed in black and white, and the music composed for the film is great. The man and his daughter are stuck in the heaviness of life’s routines, and they seem to be completely isolated from the world. One day, they receive a visitor that informs them that the world is agonizing. In this Nietzschean tale, God and men alike conspire to bring about the world’s destruction.

“Melancholia” is a poetic study of depression, hopelessness, and disappointment. Starting on the day of Justine’s (Kirsten Dunst) wedding, it follows the approach of a rogue planet called Melancholia, which is in collision course with our planet. After the wedding, Justine falls into a severe paralyzing depression, but as the planet gets closer, and with it its death menace, she seems to slowly recover. On the other hand, her sister Claire receives the news of the planet with great fear and anxiety.

Being a part of what is known as von Trier’s depression trilogy, the film is pessimistic and discomforting. Among its lyrical imagery and its many references to the history of art, there is a tale about our attraction to the obscure and dangerous. In Claire’s anxiety and Justine’s depression, we see life reacting to itself, and the heart’s behavior when faced with inevitable death.

Carlos Reygadas is one of most renowned Mexican filmmakers in the festival scene. With “Japón”, he marked a trend that is still palpable in Mexican auteur cinema. It tells the story of an unnamed man, a painter, who leaves the city and goes to a remote village with the purpose of committing suicide. With a palpable Tarkovskian influence, this bucolic film is a reunion with nature.

The man takes a room with an elderly woman named Ascen, and it is through her that he recovers his desire to live. After he sees the way she is treated by her family, he starts to develop an emotional bond with her. Being away from the city, everything feels new to him, every sensation is unprecedented, and the contact with nature is an almost religious experience.