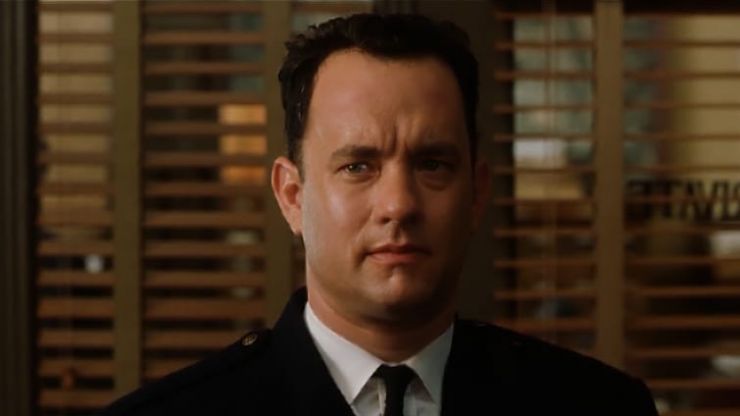 Cited as featuring one of the saddest endings in movie history, The Green Mile would be a grave omission for a list on this topic.

John Coffey is an innocent man accused of raping and killing two girls. However, upon arriving on death row, the guards notice that there’s something special about John beyond his simple mind and sensitive demeanor. He’s magic.

John has healing powers which cure many ailments but hurts him in the process. The guards, unable to free him from his sentence, instead help John to realize his potential, using his gift to heal people in the last phase of his life. John’s a miracle, sentenced to die in a gruesome way, with no one able to stop it. The Green Mile’s themes of morality, justice, and judgement infuse what could be seen outwardly as a silly concept with a maturity and realism that makes the film one of Stephen King’s most beloved cinematic adaptations.

Never has so innocent and beautiful a man been killed in such horrible fashion, and the prolonged execution makes the audience as guilty as the guards. They all weep for John Coffey, as does the viewer.

Sansho the Bailiff tells the story of a highborn family sold into slavery during Japan’s Heian period, known for both its beautiful art and its widespread barbarity.

More time passes. The children are now adults, having spent ten years in the camp. The sister, Anju, now moral and wise, advocates trying to escape, but her brother, Zushio, hardhearted and one of Sansho’s most faithful servants, believes their best shot at survival is complacency.

However, when a friend of the siblings becomes sick and needs to be disposed of, the pair volunteers to take her dying body out of the camp. This presents the opportunity to flee. Zushio leaves with the sick woman and finds sanctuary—and treatment for her—in a monastery, while Anju distracts the guards and is captured for treason. Not wanting to reveal the location of her brother, but knowing she would be forced to do so under torture, she kills herself.

Zushio returns to the governmental city, discloses his identity, and asks of the whereabouts of his father. The Chief Advisor reveals that his father is dead, but offers Zushio his father’s old position. Zushio accepts, and, with legitimate power, returns to liberate the slaves from the camp.

Though he succeeds, the knowledge of his sister’s death ravages his spirit and he renounces the government position. With one last hope for emotional salvation, he goes in search of his mother. Upon arrival at the brothel, it is revealed that she’s dead also.

Oddly, he hears his mother’s song, and tracks its tune to an unrecognizable blind woman living on the beach. It’s his mother. After much convincing that Zushio is truly himself, they reunite, but also lament the loss of their family and freedom, and the horrors leveled on one another. At least it’s a happy ending…

It’s the go-to sad movie, permanently at the center of the sadness/film Venn diagram. Schindler’s List is the first film to be mentioned when this list topic is broached, and for good reason: it’s devastating.

Firstly, there’s the Holocaust. The worst atrocity in human history. Couple that with a director whose humanistic filmmaking was so effective that the final test was to try to find beauty in the most horrifying subject matter known to mankind and you have a movie which should only be viewed after a full mental checkup.

Most of you know the story. A rich businessman named Oskar Schindler buys a factory in Krakow, Poland during the Reich. Instead of stocking it with Aryan workers, he hires a Jewish man as his partner and the two enlist predominantly Jewish men and women to run the factory—because they’re cheaper. As Poland become ghettoized and the Jews are forced into increasingly tougher circumstances, the factory becomes a safe haven for those facing persecution, as the Jews’ status as factory workers for the war effort ensures their safety under Schindler’s benefaction.

When the Final Solution is enacted and the trains come a rolling, Schindler’s focus turns from business to humanity. He saves over a thousand lives, many of whom are on the “list” created to extract people as industrial workers from Auschwitz-bound trains.

Universally decided as the saddest moment of the film, Schindler, while standing with his Jews who are about to be liberated, laments the fact he didn’t save more, weepily noting the number of people that the selling of his car and pin could have saved. The guilt is there even in the man who did the most, so the viewers who didn’t do anything—since most weren’t even born yet—are made to feel the full ramification of this moment: that Schindler’s Jews weren’t even a drop in the ocean.

2. Grave of the Fireflies 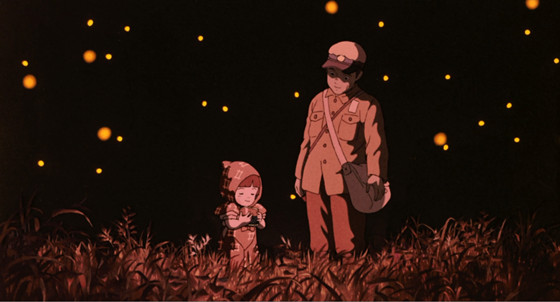 If you’re a sadness junkie who chases films that are emotionally affecting, you’ve probably come across Grave of the Fireflies, a joyless movie that could be considered irredeemable if it weren’t so brilliant.

The film concerns a brother and sister who are left to fend for themselves after American firebombs destroy their city of Kobe, Japan. Their mother dies during the bombing, so they’re forced to seek refuge with their aunt in an unharmed district. The aunt is not happy to be supporting the children in addition to her own family, especially as food rations dwindle, and becomes increasingly hostile towards them. Wanting to alleviate their Aunt’s stress, the siblings move out and take residence in a nearby bomb shelter, surviving off the hope that their father, a naval captain, will soon return and rescue them.

With little money or reserves the children’s health starts deteriorating, especially the younger sister, Setsuko, who is suffering from malnutrition. Desperate to save his sister, Seita turns to stealing food. After getting caught, he has no other option than to withdraw the remaining money from his mother’s bank account. While at the bank he learns that Japan has surrendered to the Allies, and that his father, along with the rest of the navy, is dead.

Upon returning with the first bounty of food in a long while, Seita finds that Setsuko is dying, and she passes into the other world while Seita is preparing her meal. He cremates her and puts her ashes in a fruit tin. He takes the tin and heads for a train station, where he dies also from malnutrition.

The tiniest bit of respite we have from this overwhelmingly morose story is that the spirits of Seita and Setsuko are still alive and without sadness. It’s the final shot of the movie, but we’re not sure if it makes up for the rest of the film’s emotional torture.

1. Dear Zachary: A Letter to a Son About His Father

A lot of hype has been leveled on this film for its apparently unprecedented sadness and incredible plot twist—so incredible, by the way, that the notoriously loquacious internet respects the preservation of this secret like nothing else, doing so to maximize the sorrow the unspoiled reaction would elicit. The hype is deserved. The rumors are true; Dear Zachary is our pick, and the pick of many others, as the saddest film ever made.

Dear Zachary is a true story begun as a “video scrapbook” made to chronicle the life of the deceased best friend of the filmmaker for the sake of the friend’s unborn son. That might be all the information we’re at liberty to give. What follows is a ride through the far reaches of human cruelty as the seemingly innocent story develops into a shocking thriller that makes any actual thriller tame in comparison.

Most noteworthy is the sadness that this film evokes. Many people have described an oppressive malaise that follows the viewing of this movie. In fact, it might be fair to put a name on this condition: the Dear Zachary syndrome. Some have said it lasts weeks and contains all the symptoms of a standard depressive period.

Though you may find yourself crying at many moments in the movie—and possibly many moments after—the plot bombshell is what sets Dear Zachary apart from any movie that dares to call itself a drama.