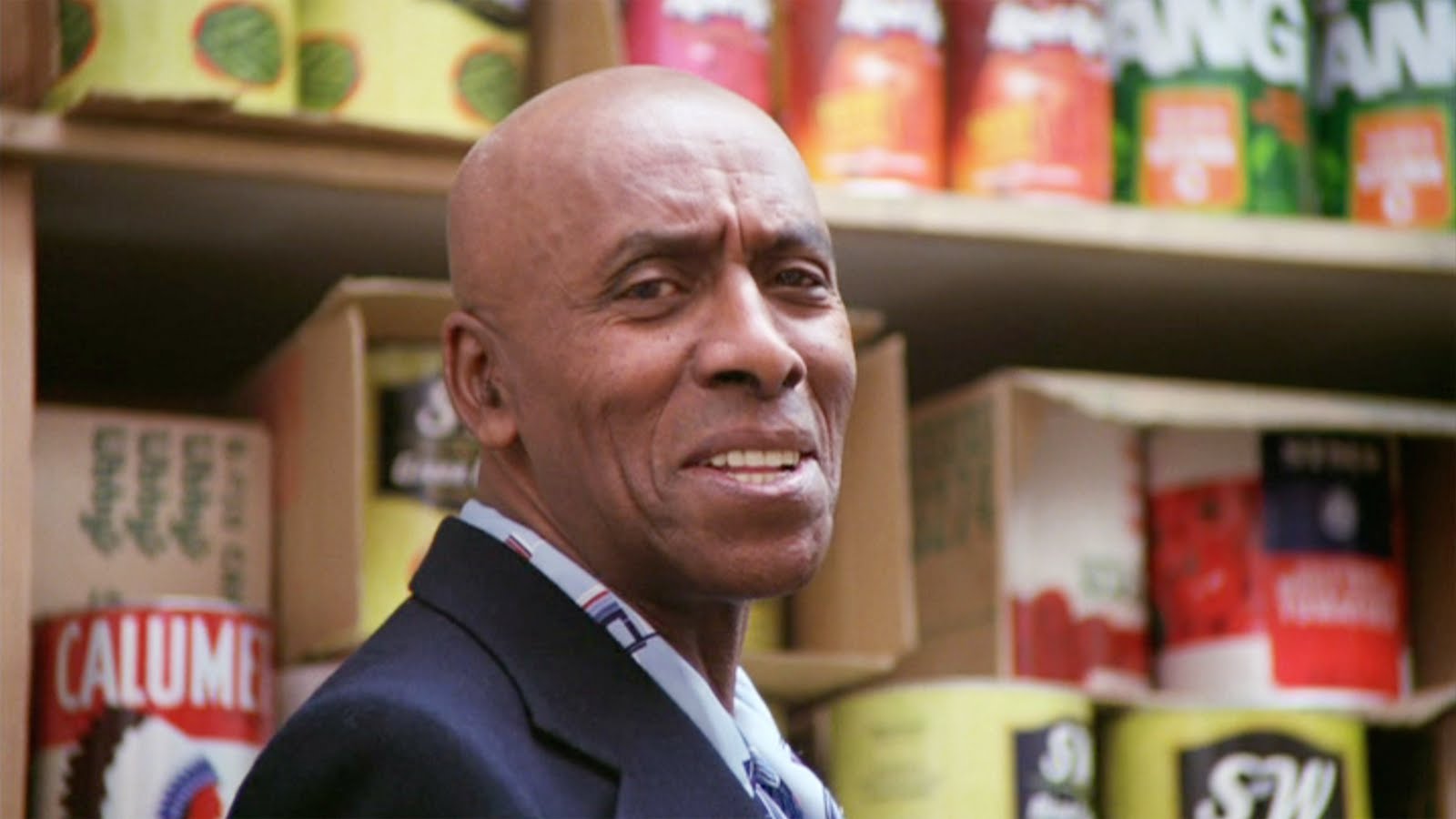 Dick Hollarann’s (Scatman Crothers) psychic link with Danny Torrance is the one plot thread in The Shining that isn’t dripping with dread. He answers Danny’s psychic messages and comes to him, but far from saving Danny from his psychotic father, he meets the end of Jack Torrance’s axe. The kindly Dick Hollarann is left to die in the ominous Overlook.

Generally regarded as the greatest horror film ever made, the maze like nature of the Overlook and the whole film in general leaves you secretly knowing that no character is safe from either Jack or Kubrick. Adapted from another Stephen King novel, but changing it so that it becomes a different beast entirely.

The basic plot stays relatively faithful: Jack and his family move to a deserted hotel where he will work as a caretaker for the winter whilst the place is closed, he thinks he will relish the time and peace, so he can continue work on his writing, but the hotel has a strange affect on him, and he goes on a murderous spree. The bond between Hollarann and Danny runs against the constant swirl of dread circling the building, as they both share their secret ability to shine. But it’s Danny’s Shine that brings him back to the Overlook and to his sudden demise.

Films have killed off kindly old gentleman before, but not with such brutality. It takes one swift blow of the axe to bump off Hollarann and then he’s gone, just like that. Kubrick is brutal in his dispatching of the character, possibly the only hope Danny has against the threat that is stalking him around the corridors of the hotel, leaving him in the clutches of his homicidal father. 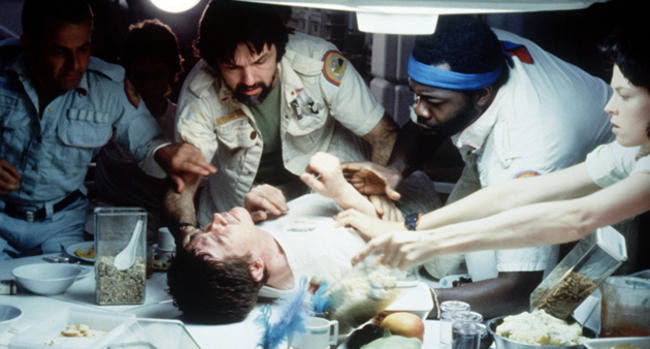 The actors were just as shocked as the viewer in the famous chest bursting scene in Alien. Their faces, splashed with blood, were etched with genuine trauma. Ridley Scott kept this whole scene a secret from the actors, and they seem just as open mouthed as the audience watching.

During the exploration of an alien ship, Kane (John Hurt) gets friendly with an obscene, spidery creature that attaches itself to his face and upon his return to the Nostromo it drops off, seemingly dead. Whilst regaining full consciousness, he seems to be totally unaffected by the strange alien attachment. But, in now the most famous scene of dining in history (taking the number one spot from The Last Supper), he starts convulsing and writhing on the dinner table before a monstrous alien creature hatches out of his chest, spraying everything in sight with a fine shower of gore.

No horror set in space had ever been as graphic as Alien, its shocks and menace are yet to be surpassed even in today’s jaded times. Kane is left banging at deaths door when the face hugger grabs on to him and doesn’t relinquish its grip, so the viewer casts him aside as fodder, but he makes a miraculous recovery when the alien loosens its hold. There’s always that small scratching feeling that Kane will not be the same after his ordeal, but he seems fine. Its then we’re hit with THAT scene.

In 1960 your leading lady made it to the end, no matter what she endured, she would be there as the end credits started to roll. Hitchcock changed all that, no one was safe in film from that point onwards. An audience member going to watch Psycho in them innocent times would fully one hundred percent expect Janet Leigh to still be standing at the films finale, the shock of her being carved up less than halfway through would have been catastrophic, much to Hitchcock’s glee.

Marion Crane (Leigh) a real estate secretary wants to get married to her boyfriend Sam Loomis, but because of his debts, their incapable of funding such an event. She therefore steals a clients $40,000, packs her bags and arranges to meet Sam in California. It’s a long journey so she decides to stay in a cosy little establishment for the night, the Bates Motel and enjoys dinner with the proprietor Norman Bates.

All very Hitchcock so far, tension builds and we settle in for another great suspense from the master. But then Marion decides to take that fateful shower and the whole film world is turned upside down with one of the first great shock deaths in cinema.

A blurred outline of a woman from behind the shower curtain, the raising of the arm, the curtain pulls back, and a few frenzied thrusts of the knife and a few minutes of that famous score and our lead actress, the one that 1960’s audiences had no doubt would survive to the end is laying dead in the shower. From that moment on Hitchcock could throw anything at us, and by the end of Psycho he has.

Most of the deaths in this list have been ugly, horrid affairs, but the end of The Wicker Man, whilst no less depressing and shocking than the others, holds a strange beauty to it.

The huge wicker structure containing the virginal God fearing Sergeant Howie, his cries going unheard as the Wicker Man burns away to reveal a sunset on the horizon. After the strange build up of the story and the madness of the end it’s an image that is tattooed on horror cinema and all of cinema in general, as, without any bloodshed it surprises and haunts.

Righteous police officer Sergeant Howie (Edward Woodward) is sent to the island of Summerisle to investigate the disappearance of a young girl. Whilst there, he encounters strange pagan rituals and everything that could be considered anti-Christian, much to his bafflement and horror. Upon finding the missing girl and learning that in order for the island to have a successful harvest she would have to be sacrificed, he foolishly tries to help her and falls into their trap.

Howie’s cries of “Oh Jesus Christ!” as he is led to the infamous figure is horrifyingly juxtaposed with the cheery chanting and singing of the village folk, and you half expect him to escape or for someone to save the day, but he is led to and locked inside the wicker man and burns, his howls of torment are taken by the breeze, no one, even his God has heard him, and much to the audiences shock, he perishes.

Survival in this legendarily low budget film is key, and to survive to the end, through many challenges, keeping everyone around him alive as they grasp onto the brink of sanity, and more importantly evading a full on zombie apocalypse, is a major struggle. But Ben (Duane Jones) just about makes it, emerging from his hiding place the morning after the attack, he looks out the window and is shot by the marauding zombie hunters who mistake him for a fully paid up member of the living dead, who then burn his body on the bonfire of flesh that is high with the living dead that Ben had helped stack the previous night.

The world is in the throes of an outbreak; the dead are coming back to life and eating the flesh of the living and we focus on a small group of individuals who somehow end up together in a farmhouse, which they barricade and turn into a fortress from the horrors of the world that lies just outside.

The ending makes you feel worthless, what’s the point of surviving? What’s the point in fighting to live? Coming through as the clear hero of the film, Ben fights his way valiantly through the hordes and gets nothing in the way of reward, the sudden light of the morning seeming to tell the viewer all will be fine, but hitting you with a sucker punch in its dying moments, leaving the audience open mouthed and wallowing deep in the harrowing outcome of that end scene.