What is it about truly disturbing movies that film fans enjoy? Is it their sheer audacity and strangeness? The extreme violence and graphic sexual elements that are often on display in these films? Is it some sort of severe second-hand prurient thrill we’re seeking through fiction?

Whatever the case, many dedicated cinephiles tend to seek out transgressive films whose content is exceedingly horrifying or graphic. Perhaps it’s to witness something they thought they’d never see in a movie—something that may be deeply unpleasant or disturbing, but unique nonetheless.

It’s difficult to call many of the films on this list “good.” Some are very artistic, or original, or interesting, but their themes, narratives, and overall content bar most of them from being considered “good.” Most of these films contain wildly transgressive and disturbing material, such as rape and incest, and none of them carry positive messages or have upbeat endings. A fair amount of the protagonists don’t even survive these movies.

Maybe the reason some film fans seek out the most disturbing, sick, and extreme films they can find because it’s a way to combat their own deep fears and revulsion towards the truly awful in the world—that if they see horrifying things depicted on-screen, they can somehow become immune to them. Whatever the case, if you’re looking for films that will make you think twice about why you’re even watching it—and enjoy the endurance test of sitting through such unpleasant material—here are the ten most disturbing films of the 21st century (so far).

In 2007, David witnesses a hit-and-run, which makes him recall a disturbing incident in his past. The film then flashes back to 1958, where a young David meets two adolescent girls, Meg and Susan, who have moved next door to him after losing their parents in an accident. They are taken in by the Chandlers, relatives that include Ruth, the mother, and her three sons. David immediately develops a crush on Meg, but in the degenerate household that Ruth runs–which includes providing adolescents in the neighbor with beer and cigarettes–no innocence can remain for long.

Before long, Meg becomes the target for Ruth’s sadistic abuse, being starved and subjected to verbal insults. The situation quickly degenerates as Meg fends off the unwanted attentions of the boys in the house, which leads Ruth to beat her little sister Susan as punishment.

After trying to alert the police of the abuse in the house, Meg is bound in the cellar with her hands tied to the rafters. She is subjected to physical and sexual abuse by the entire Chandler household and some neighborhood boys while her sister is similarly abused by Ruth. While David plans to help her escape, Meg’s torture becomes more severe before a brutal end to her suffering is found.

The Girl Next Door is an unpleasant watch: a horror film rooted in reality, its awful depictions of the extent people will go to inflict pain and abuse on another because it’s condoned and encouraged by family members is sure to disturb even the most jaded film-goer. Praised by critics but disliked by audiences, no less a luminary than Stephen King called it, “The most authentically shocking American film I’ve seen since Henry: Portrait of a Serial Killer.”

A couple keeps their adult son and two adult daughters in their highly secure, fenced-in compound. Raised from birth never once leaving the premises, these unnamed adult children are completely unaware of the outside world, having been conditioned by their parents to think that everywhere except for their family property has fallen into violent anarchy. They are tricked into thinking they have another brother who lives just outside the wall, so they throw supplies over for him.

When a plane passes overhead, the father sneaks around to the other side of the fence and tosses a toy plane for them to find. They have been told they can only leave the estate by car, and even then only until their “dogtooth” (canine) falls out.

The father pays an employee from his factory to come to the house to have sex with the son. When the employee fails to find pleasure from the son, she gives one of the daughters a headband to sexually satisfy her.

This daughter later gains access to VHS tapes from the employee for this service and watches them in secret, revealing to her a world very different from what she was told about. The father finds out about this, beats the employee, and fires her. He then orders his son to pick which sister to have sex with. After this, the daughter that has become aware of the outside world plans her escape.

Dogtooth is an insidiously disturbing movie on many levels. Between the parent’s bewildering and carefully thought-out child abuse and the adult children’s complete unawareness of not just the outside world but basic concepts of life, watching Dogtooth is like watching the creepiest documentary you could imagine of one of the most dysfunctional families of all time.

Made on a low budget, Dogtooth was a smash at Cannes and was nominated for Best Foreign Film at the Academy Awards that year. It’s a haunting film that disturbs the viewer from its very concept of the incredible damage overprotective parents can inflict on their children and the desperate measures one will take to escape from such a situation.

Oldboy is a disturbing film on this list that has gained a cult following and was proven popular enough to justify a (terrible) American remake. The 2003 South Korean original—directed by Park Chan-wook—involves the bloody vengeance a man enacts after being imprisoned for 15 years by an unknown party for unknown reasons. Just after his imprisonment begins, Oh (Choi Min-sik) finds out from the TV that his wife had been murdered and he is a prime suspect. spends over a decade trapped in a cell that looks like a hotel room before being suddenly released with no explanation.

With his daughter having been adopted years ago, Oh becomes determined to uncover who stole his life, finding vague clues about his mysterious captor. Along the way, Oh also becomes involved with a beautiful young sushi chef, and the two form an intimate connection.

Oh is also contacted by a wealthy man who seems to be behind his long imprisonment, telling Oh that if he can figure out why he was imprisoned, the wealthy man will kill himself. But there’s one more devastating secret that will push Oh to his breaking point.

Incredibly violent and with a few disturbing twists and turns, Oldboy introduced South Korean’s excellent cinematic output to a lot of film fans and even 14 years after its release remains one of the most disturbing films of the 21st century. 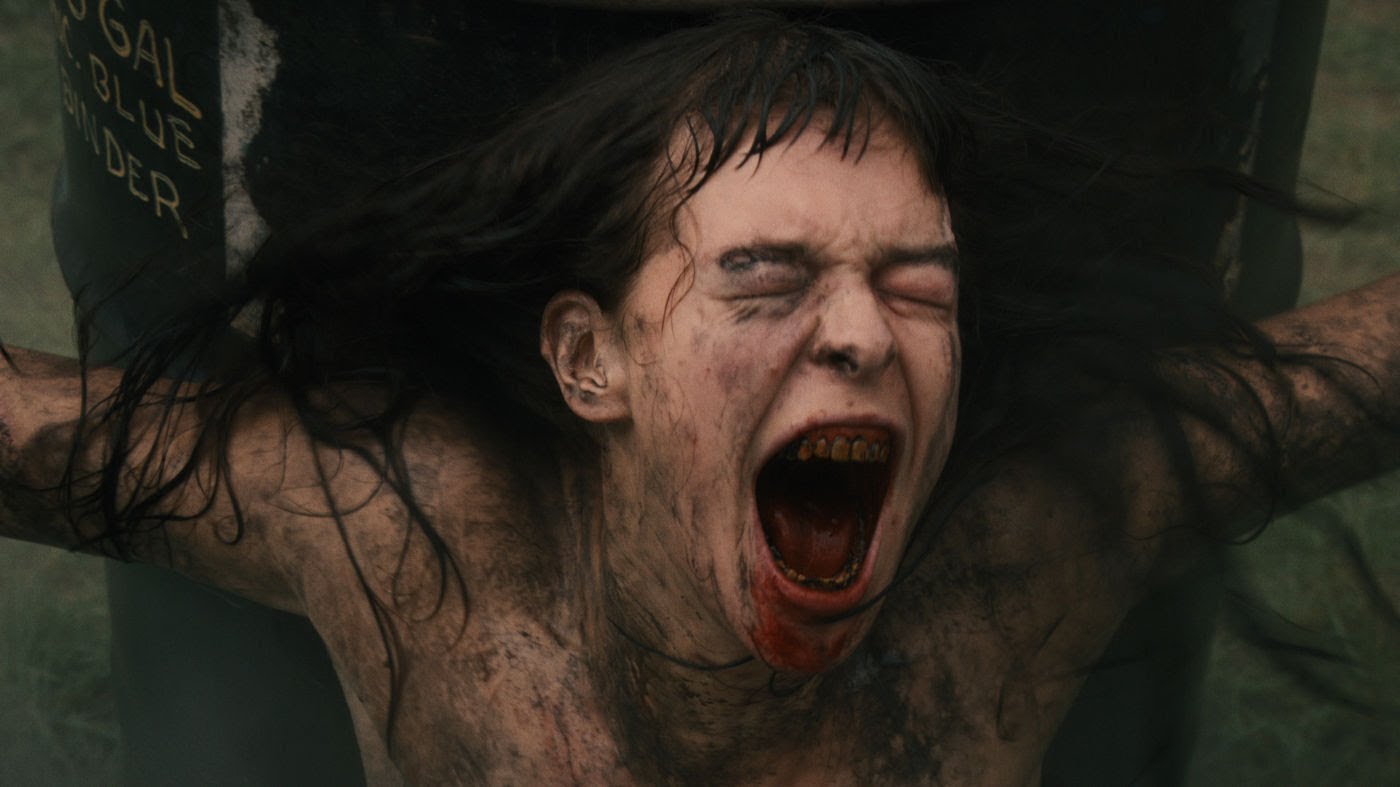 A feral woman is found by a suburban father who’s out hunting. The man captures the woman and brings her to his house, where it’s apparent his family is wildly dysfunctional, and announces that they’re going to attempt to “civilize” this woman. His wife passively allows the father’s increasingly transgressive behaviors towards the woman—which includes bathing her in boiling hot water and violently enforcing measures in his attempts to civilize her—while their withdrawn teenage daughter looks on in horror.

The film escalates in violence, especially when the daughter’s teacher shows up to share some unpleasant news about her with the family and even more disturbing secrets of the family are revealed, before an explosive, violent ending.

A loose sequel to 2009’s The Offspring, The Woman was directed by Lucky McKee, who had previously directed the grotesque black comedy May. Especially for an American-made horror film, The Woman is gleefully perverse and depicts a truly dysfunctional family that maintains normalcy on its surface. Underseen upon release, fans of disturbing horror will find what they’re looking for—whatever it is any of us are looking for in these kinds of films—in The Woman.

A woman is held captive by a gifted plastic surgeon who has developed artificial skin. His housekeeper’s son comes to the surgeon’s lavish estate to hide after committing a robbery, in which he promptly overpowers his mother and rapes the captive woman. The plastic surgeon returns home and murders him. And this isn’t even the most disturbing part of the film.

The Skin I Live In, by acclaimed director Pedro Almodóvar, plays a narrative trick on the audience that is in turns a revenge story and psychological horror. It’s revealed that the surgeon, played by Antonio Banderas, has had a traumatic past that involved his wife being horrifically scarred due to being badly burnt in a car crash, which leads her to commit suicide.

Afterwards, his mentally ill daughter was traumatized by a sexual encounter with a young man, Vincente, at a wedding, which also leads her to commit suicide. Driven by revenge, the doctor finds the young man responsible for his daughter’s trauma, kidnaps him, and locks him away in his estate, where he subjects Vincente to a six-year-long sexual reassignment process that turns him into Vera.

The Skin I Live In is in many ways a body horror film that’s disturbing for viewers due to Vincente/Vera’s agony at being reassigned gender against his/her will and the struggle he/she has in retaining their identity.

Banderas gives perhaps his best performance as the disturbed doctor, while Elena Anaya delivers a tricky performance as—quite literally—a man trapped in a woman’s body. Far more intelligent than most horror films, with a deceptively lush and meditative tone, The Skin I Live In has more going on under the surface to upset the viewer than it first appears.