It’s hard to think of a twenty-first century filmmaker more reclusive than Terrence Malick. He’s almost never interviewed; he’s rarely photographed on set; and in the past, he’s even avoided the Oscars, despite being nominated for Best Director both “The Thin Red Line” and “The Tree of Life.”

Yet as elusive as Malick is, he’s nothing compared to the women and men in his movies, who can usually be summed up solely in hazy catchphrases (Christian Bale’s character in “Knight of Cups,” for one, is best described as “a Los Angeles writer who feels unfulfilled”). In fact, thanks to a combination of vague voiceovers, fragmented scenes, and elliptical conclusions, Malick’s movies generally resist any concrete interpretation. They’re too otherworldly, too experimental, too tricky to be easily pinned down with the point of a critical pen.

That said, the process of trying to decode the mysteries of Malick can be intoxicating. Yes, the journey erodes some of his mystique, but attempting to unravel his creative intentions often leads to fascinating and mind-stretching destinations, whether you’re uncovering a character’s concealed motives or wrestling with the meaning of a perplexing plot point (or simply wondering of Malick, “What was he thinking?”).

The following list investigates many of those puzzlers. It is by no means exhaustive—Malick’s films are packed so densely with narrative strands that moviegoers may never be able to list them all, let alone understand them—but it is a start, a guide to a filmmaker who has made a career out of mystifying us, whether he’s journeying across the golden plains of Oklahoma or staring out into the fringes of the known universe.

So buckle up. Malick may believe that “there two ways through life,” but there are countless paths you can take to comprehend his movies. This is one of them.

1. What is the point of the seemingly random montage about the birth of the universe in “The Tree of Life”? 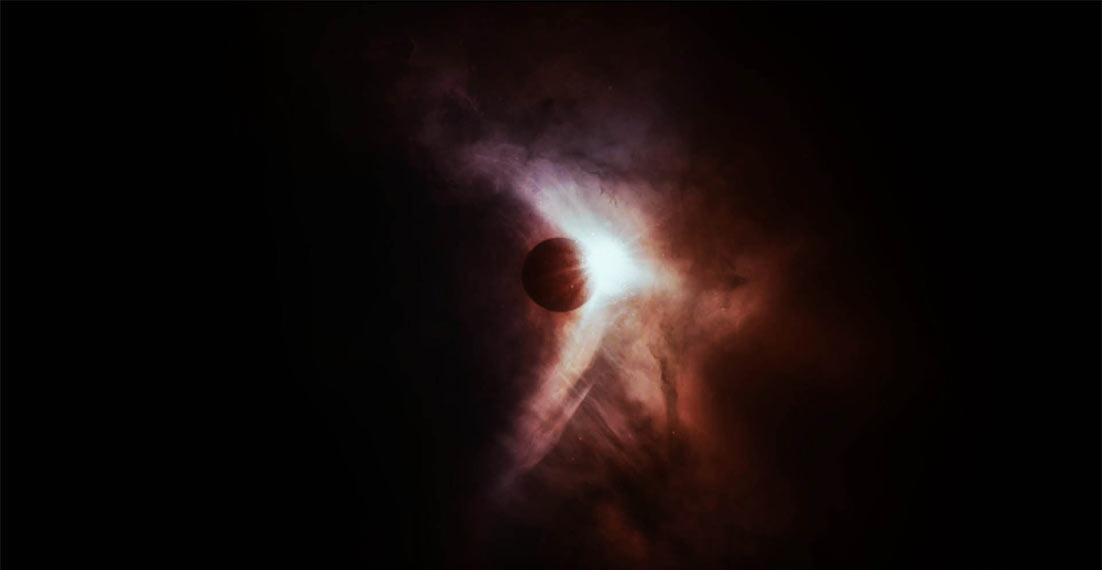 The celestial vistas…the swirling waves…the dinosaurs. For anyone who first saw “The Tree of Life” in a theater when it was released in 2011, those images, which are part of a montage chronicling the origin of the universe and the Earth, are impossible to forget. Yet they’re also baffling because they initially appear disconnected from the film’s primary narrative, the story of a boy named Jack (Hunter McCracken) being raised by a vicious egomaniac of a father (Brad Pitt) in Texas during the 1950s.

So why did Malick rupture the film’s oedipal drama by going cosmic? Possibly because it was the only way to alleviate Jack’s anguish. As an adult, Jack (now played by Sean Penn) declares, “The world’s going to the dogs. People are greedy. It keeps getting worse”—he regards his personal suffering as a symptom of a decaying world.

But by showing us beauteous images of early life on Earth (including a gorgeous shot of a dinosaur lounging on a beach), Malick counteracts Jack’s pessimism by reminding us that Earth is an ecosystem that has produced wonders. By that count, “The Tree of Life” shows that just by living on this planet, we become a part of something glorious—a realization that leads to a reawakening of Jack’s slumbering sense of hope.

2. Why does Neil (Ben Affleck) neglect his wife in “To the Wonder”?

Trying to penetrate the psyche of a typical Malick protagonist can often feel like trying to topple an iron wall with a toothpick. Neil is no exception—lumbering, evasive, and frequently mute, he is a seemingly unknowable wraith of a man, especially when he giddily woos Marina (Olga Kurylenko), a single mother from France, only to coldly ignore and abuse her after they marry.

Since Neil is one of the few major characters in “To the Wonder” who doesn’t address the audience in voiceover throughout the entire film, it’s tricky to trace his behavior back to any discernible motive. Yet there is an explanation for Neil’s noxious conduct nestled in a sermon delivered by his priest, Father Quintana (Javier Bardem):

In essence, Quintana believes that while Jesus will forgive his followers for their missteps, he will not forgive them for failing to step in the first place. This intimates that Neil, in Quintana’s moral vision, should be faulted for his indecisiveness, which keeps him from spurning Marina’s marriage proposal even when he knows he no longer loves her—thereby prolonging their romance long past its expiration date and transforming it into a storm of both physical and verbal violence.

Neil’s moral frailty is also responsible for his catastrophic affair with Jane (Rachel McAdams), a rancher mourning her young daughter’s death. While Neil harbors only flimsy affection for Jane, he lamely submits to her plea for romantic commitment. Later, while roaming the darkened rooms of her isolated home, Jane castigates Neil for his weakness, declaring that their relationship “was nothing. You made it nothing.” She’s right, and according to Malick and Quintana, the “nothing” Neil created was borne of his inaction.

3. Why is “Days of Heaven” so conventional, compared to Malick’s later films?

Moody, lyrical, and steeped in rural beauty, “Days of Heaven” is essential viewing for Malick devotees. Set in 1916, the film follows the fortunes of Abby (Brooke Adams) and Bill (Richard Gere), two drifters attempting to manipulate a dying farmer (Sam Shepard) into bequeathing them his fortune. It’s a story that brims with feeling, thanks largely to Shepard’s gently vulnerable performance as the farmer, whose tragic naiveté makes him a target for Bill’s insidious scheming.

While “Days of Heaven” continues to command the adoration of cinephiles (and was even re-released by Criterion), it doesn’t radically reject the confines of coherent storytelling the way Malick’s later films do. It may sometimes feel more like a poem than a film, but its core story—the saga of how Abby exploits the farmer, but ultimately falls for him—echoes countless Hollywood melodramas and romantic comedies.

This is probably because “Days of Heaven” was only Malick’s second feature (after 1973’s “Badlands”)—the style of even the most self-assured auteur usually doesn’t solidify in their sophomore effort (witness the post-”Usual Suspects” evolution of Bryan Singer from cynic to superhero savant). Visual, thematic, and narrative obsessions shift as careers unfold and as moving as “Days of Heaven” is, when it was released in 1978 it offered just a taste of the insurrectionist spirit of Malick marvels to come.

4. What’s the point of the scene with the crocodile in “The Thin Red Line”?

Based on James Jones’ novel of the same name, “The Thin Red Line” takes place during World War II and starts with something scaly: the image of a hulking crocodile slithering through mud-filled water. It’s a bemusing scene, even for Malick—when you start watching a movie with a cast that includes the dashing likes of George Clooney and Jared Leto, you don’t expect the first actor you see onscreen to be a reptile.

Yet the crocodile’s cameo underscores the movie’s point—that war is an unnatural phenomenon that perverts the magnificence of the natural world. The crocodile, though fierce looking, is beautiful in its size and power and by placing it at the start of the story, Malick makes a defiant declaration: that despite being a war film, “The Thin Red Line” will celebrate the natural world, not the forces that desecrate it.

5. In “Knight of Cups,” what causes Rick (Christian Bale) to become a superficial playboy?

While “Knight of Cups” is soaked in Malick’s trademark muted colors and hushed intimacy, the film features scenes of debauchery that wouldn’t have felt out of place in an art-house remake of “The Hangover.” Rick, the film’s protagonist, may be a screenwriter, but we hardly ever see him writing—more often, he parties like Jordan Belfort, and even dates a stripper (Teresa Palmer).

So what explains the boorish behavior of the lone party animal in Malick’s zoo of principal characters? It’s hard to say. Little is known about Rick, save for the fact that he lives in Los Angeles, is wary of his suicidal brother, Barry (Wes Bentley), and despises his dilapidated father (Brian Denehy). But believe it or not, the resolution of the mystery of Rick may have a name: Ruth.

Ruth is the name of Cherry Jones’ character in “Knight of Cups,” who we see spending time with both Rick and Barry and exuding an overbearing yet genial aura (“I hope you have children,” she tells Rick). Her appearance is truncated—she’s featured in only one of the film’s numerous montages—yet she seems to be Rick and Barry’s mother.

And she may be dead, Malick hints. Near the film’s end, Rick visits the scorched remains of a burned-down house and says that someone was left there “to get burned up.” He could be referring to his other brother (whose funeral we witness early in the film), but it’s equally likely that he lost his mother to those flames (which would explain Ruth’s absence from the majority of the movie).

Of course, this is all conjecture—without getting direct confirmation from Malick, it’s impossible to be sure that Ruth is Rick’s mother. Still, that fog of uncertainty of part of the reason why Malick’s movies are consistently entrancing. Watching most modern American films is like hiking along a freshly cut concrete trail; watching a Malick movie is like stumbling down a crowded Manhattan boulevard devoid of street lamps, disoriented but roused by the thrill of feeling just a little lost in the dark.