From The Asphalt Jungle (1950) and Rififi (1955) to Dog Day Afternoon (1975) and 70s stylish neo-noir thriller such as Le Cercle Rouge (1970) and The Driver (1978) and then 90s heavy action thrillers and wisecrack, cockney caper films that include Point Break (1991), Heat (1995) and Out of Sight (1998) as well as other great entries throughout this trajectory, it might seem like there is little ground to cover in the heist genre during the 21st century.

Since the early 2000s, there has been a fair share of quick-cash derivative or B-quality robbery films, but there has also been plenty of heist thrillers that embody the best qualities of the subgenre, as well as those that have in one way or another, contributed new, innovative material to expand its landscape.

For purposes of novelty, popular high-budgeted films that focus on special-effect spectacles that overshadow its heist genre qualities such as Inception (2010) and Fast Five (2011), although mesmerizing, will not be included in the list. In the same manner, crime dramas whose heists are only procedural, unimportant or simply do not fill out the quota of the genre’s conventions throughout their character driven dramas such as revisionist western The Assassination of Jesse James by the Coward Robert Ford (2007) and last year’s neo-western Hell or High Water (2016) will not be included in the discussion.

Needless to say, the selected films revolve around heists and thefts, but from their own distinctive angle. Therefore, this list strives to provide a loose, but not definitive ranking of the best heist film since the year 2000. Enjoy. 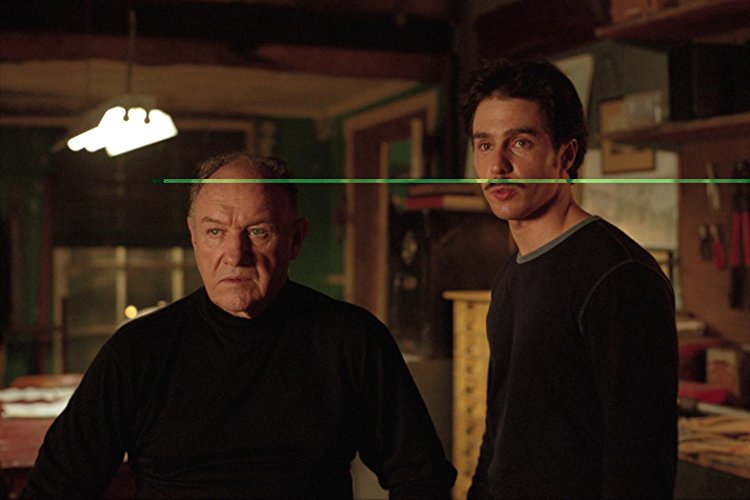 “Everybody needs money. That’s why they call it money.” If Danny DeVito’s two-cent mastermind Mickey Bergman: a crooked foulmouthed short man that avariciously examines jewels through a monocle is the antagonist of David Mamet’s ensemble piece – an archetype as old as stone to the genre – then it is no wonder why a Pulitzer Prize winning auteur such as Mamet would go for a title such as this one.

A solid first entry to a list of heist films, Heist is a meticulously constructed caper picture, that despite not covering new ground, does encapsulates the best qualities of the genre: the witty, down-to-earth banter, the counter-plan twists, the clockwork mechanics and up-the-sleeve aces that make a heist successful, as well as the feelings of distrust, the betrayals, the seduction. It’s all here.

Heist follows worn, but level-headed veteran thief Joe Moore (Gene Hackman at his element), along lifelong crewmembers Bobby Blane (Delroy Lindo maintaining convincing chemistry with Hackman) and Pinky Pincus (Mamet-regular Ricky Jay), as well as wife Fran (a colloquial Rebecca Pidgeon countering the noir female lead archetype). Once Joe is caught by a security camera during a heist, he decides to hang up the gloves and flee to the Caribbean, but Bergman withholds his payment as a countermeasure to force him back to pull “one last job.”

To ensure Moore sticks to the agreement, Bergman brings in his scoundrel nephew, Jimmy Silk (Sam Rockwell in a role not too far from his one in Matchstick Men), who is not only short-circuit thwart to Joe, but his attraction towards Fran further adds to the fire.

Ultimately, Heist is the kind of old-fashioned caper film that prefers to pick a lock with hairpins rather than blow it off with a glue bomb. From its opening diamond robbery to its scheme to retrieve gold bars from a cargo airplane, the real heist Mamet’s script pulls off to charm the viewer does not rely on the gunplay or the twists already worn by other heist entries, but on the enriched, consistent wordplay endowed with a sense of comical, oftentimes self-deprecating, cynicism that is so integral to caper film as slick as Heist. 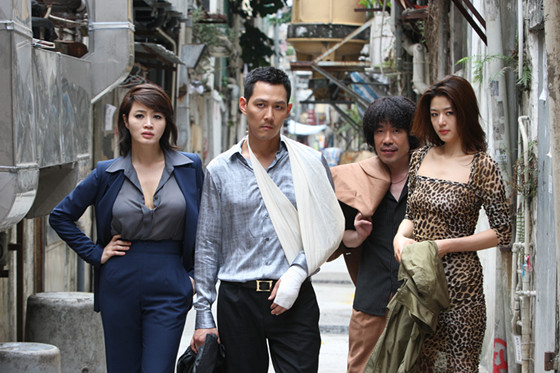 Half Ocean’s Eleven. Half 90s Hong Kong action genre. South Korean director Choi Dong-hoon’s heist blockbuster The Thieves might come across as derivative, but it showcases a well-calibrated combination of gamesmanship and witty repartee, the twists and turns in a contest of one-upmanship, and lastly, outrageous, yet exhilarating stunts that include rappelling daredevils, car chases and shootouts.

Staged in foreign luxurious interiors and surrounded by elegant apparel, The Thieves starts off in a similar note to Soderbergh’s heist film: master craftsman Macao Park (Kim Yun-seok) brings together both a Korean and Chinese parties in order to steal a $20 million worth legendary diamond known as the “Tear of the Sun” and sell it to an unseen Keyser Söze-esque mobster called Wei Hong.

Along the way, the characters are polished through slapstick shenanigans, multilingual barriers and seductive interactions until the much-awaited and notably well-edited heist, whose operation skips back-and-forth between a stealth infiltration, the holding of guards at gunpoint, and the obligatory incognito couple putting up appearances (Simon Yam and Kim Hae-sook in a tragically romantic subplot).

However, The Thieves takes a turn for the worst (and all the more exciting) when the plan goes awry and tests the members’ alliances by plummeting them in an every-man-for-himself scenario.

Ultimately, Dong-hoon’s The Thieves wears its badge – as the current fifth highest-grossing movie in Korean film history – not only because it is a debonair spectacle of technical craftsmanship, but also for managing to provide enough old scores to settle and amusing interactions from well-thought characters above the average blockbuster.

Through a bank’s security camera, four men wearing ghoulish masks and carrying assault rifles barge through its doors in what appears to be the onset to an armed robbery. As it unfolds, not only do the intruders erase evidence by putting the security footage data sticks inside a microwave, throwing cellphones inside fishbowls, and using bleach to clean DNA traces, but on top of it, one of the assailants savagely beats the bank manager’s head with his assault rifle.

As the opening of The Town goes to show, there is an extreme attention to detail as well as a distinctive lean, but brutal quality (even bullets holes on a certain character’s face have this particular appeal) overflowing to Ben Affleck’s film adaption of Prince of Thieves.

Similar to the string of crime dramas set in Boston such as Mystic River (2003), The Departed (2006) and Affleck’s debut Gone Baby Gone (2007), crime is as thick as blood in The Town. Pic follows band ringleader Doug MacRay (Affleck in his signature nonchalant demeanor) – who under the leads of local crime lord Fergie “The Gardener” Colm (Pete Postlethwaite) – pulls off bank jobs alongside paranoid, volatile partner Jem Coughlin (Jeremy Renner in one of his most memorable roles) and two other fellows.

Strikingly similar to Michael Mann’s Heat (1995), the stakes start to stack when MacRay seeks out and strikes a romance with bank hostess and robbery witness Claire Keesey (Rebecca Hall in solid form) just when Jon Hamm’s cookie cutter FBI agent Adam Frawley is about to close in on MacRay’s band of outlaws.

As a heist thriller, the planning is procedural and the FBI storyline runs thin, yet The Town is at its strongest, most gut-wrenching during the shootouts, robberies, and car getaways that pit the plan of action against Renner’s wild card Coughlin (the film’s emblematic nun scene for example), who is not only an untamable force throughout the film, but also the embodiment of the same desires and instincts of the criminal world that MacRay is trying to break away.

The handsome face of 21st century heist-thrillers, Soderbergh’s famous caper film is nothing if not nonchalant, unadulterated fun. A remake of Lewis Milestone’s 1960 film of the same name, Ocean’s Eleven does not aim to reinvent the wheel, if anything it follows the procedural steps set by Rififi (1955), but it does so while providing plenty of witty remarks, comedic banter, and finesse from its signature rat pack: a stellar cast that includes George Clooney, Brad Pitt, Julia Roberts, Matt Damon, Don Cheadle, Bernie Mac, a relatively then-unknown Casey Affleck and more.

The heist is set in motion when Danny Ocean (a suave Clooney, or just regular Clooney) – fresh out of prison and seeking the next job – gets in touch with his old partner Rusty Ryan (Pitt) in order to plot a scheme to steal from three Las Vegas casinos (actual real-life The Mirage, the Bellagio, and the MGM Grand).

Together, the duo recruits an all-star team, each member specializing in fields such as demolition, casino dealing, surveillance, acrobatics, etc. However, the stakes continue to stack when the team, much to their dismay, learns that Ocean’s ulterior motive is not only to steal the money, but also win back his ex-wife Tess (Roberts) from Las Vegas tycoon Terry Benedict (Andy Garcia).

Whether it may be Ocean and Benedict battling it out for Tess, Rusty giving pep talks to Damon’s Linus on how to be a successful conman, or the well-carried mannerisms of scrupulous billionaire Saul Bloom (Carl Reiner) and extravagant, yet poised Las Vegas queen Tishkoff (Elliot Gould), there’s an undeniable charm to Ted Griffin’s concise, slick script and how the actors stroll through luxurious settings and bounce amusing remarks on one another while simultaneously pulling off a low-stake, all surface, yet highly satisfying payoff. 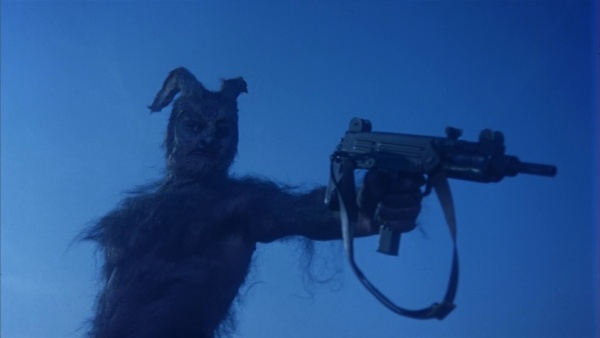 Whether it’d be an eerie man with a macabre rabbit head holding an automatic rifle, a ludicrous Indiana Jones-esque large boulder rolling to destroy a pool, or Ben Kingsley’s gleeful psychotic Don Logan hilariously yelling “No” repeatedly like a locomotive, calling Jonathan Glazer’s film debut “unconventional” fails to describe just how far it is from the regular heist thriller, or even a traditional film narrative for that matter. Sexy Beast is built on an episodic structure and walks a fine line between comedy and graphic violence, credibility and the absurd.

However, the past returns to haunt Dove in the form of Don Logan (Kingsley in a must-see-to-believe performance), who proposes for the ol’ battered gangster to return to London for “one last job” as requested by criminal overlord and Logan’s master Teddy Bass (Ian McShane), and won’t take no for an answer.

If Logan is not like a hard-wired, unwavering mad dog that has crawled from hell to bark at a tree until it falls (and as evident with Dove, it will), he could might as well be a prodigious mouthpiece for an endless string of Cockney insults and profanities. When an annoyed Dove utters: “This is madness, I’ve had enough of this “Crime and Punishment” bollocks, I’m happy here,” Don responds, “I won’t let you be happy, why should I?”

As a heist film, the criminal act itself takes a backseat, but it serves its purpose as the center point around which Glazer’s surreal nonsense hovers: How will Dove break away from Logan’s grasp and the criminal life? how far can Logan’s and Bass’ motivations go? Just how morally corrupt are these people and most importantly, how will it end for them exactly? And even then, perhaps it does not matter. Watching these characters unfold is like staring at a flickering lightbulb you can’t look away from.