“Sing Street” is one of those heartwarming films where you want to stand up and cheer when it’s over. This rock ’n’ roll musical / comedy is written and directed by John Carney (who also directed “Once” and the excellent drama “On the Edge”).

It stars Ferdia Walsh-Peelo as Conor, a kid with a chaotic family life who is being relocated to a new school by his father (Aidan Gillen). There, he meets the beautiful Raphina (Lucy Boynton), an aspiring model, and instantly falls in love with her. Conor has a decision to make – what better way to impress her than to start a band? And so the adventure begins…

This film nominally takes place in our reality, with lots of realistic elements of everyday family life and those in school, but its reality is the reality of the songs Conor’s band “Sing Street“ performs.

“Sing Street“ is a “boy meets girl“ film, without feeling formulastic for a single moment, mostly thanks to the wonderful acting creations of the main characters and the energetic direction of John Carney. It takes place in Dublin in 1985, and the place and time are wonderfully recreated. The soundtrack is great, featuring The Cure, Duran Duran, The Jam, Motörhead, The Clash, Spandau Ballet, among others.

Also, the music from Conor’s band is very good, funny, and rebellious at times. “Sing Street” is a warm, charming, and rebellious film, a love letter to the 80s, and to a time in life when everything looks possible.

Yorgos Lanthimos is a director of highly individual, satirical, absurdist films, and with his work, he questions and satirizes the modern concepts of basic human functioning. His surrealistic and nightmarish “Dogtooth” was mostly targeted toward the concept of modern family life, was told through the deadpan delivery of his characters, and was tightly composed of shots in a cold, minimalistic setting. His “The Lobster” is equally absurdist, a deadpan nightmarish comedy whose target is modern dating.

The film stars Colin Farrell as David who, after he discovers that his wife left him, is locked in a hotel with a number of other single people and he is ordered to find his partner in the timeframe of 45 days or he will be turned into an animal. He accepts and chooses the lobster.

Like in “Dogtooth”, the deadpan delivery, humor black as night, and absurdism are also very much present here. The people’s need to find at least something similar in their partner are brutally satirized here. Also, in a time when dating is very much a part of big online services and apps, “The Lobster” comes off as an effective and vicious attack on the machinery of connecting people.

Although “Dogtooth” is more consistent than “The Lobster”, the latter also has the power to shake up the viewer. Its impact is even bigger after it’s over, when some of the situations hit you again and continue to haunt you. 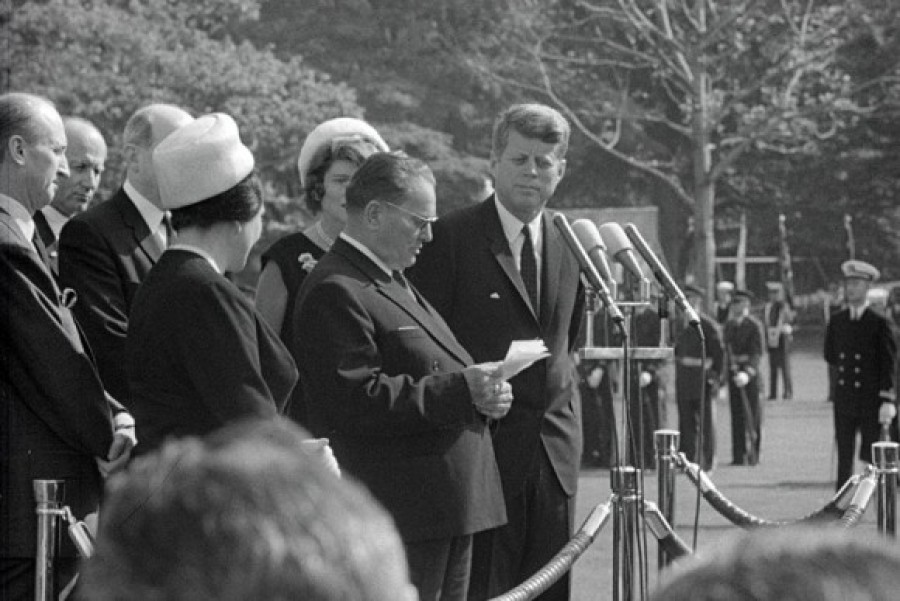 “Houston, We Have a Problem” is one of the more interesting films of recent years. It’s a mockumentary about the alleged space program of the socialist former Yugoslavia (Socialist Federal Republic of Yugoslavia) designed for a flight to the Moon, brought from Yugoslavia by the US.

The film mixes the archive material with the many acted parts (especially acted interviews) in a great way, combining it in a very appropriate form. In its second part, the film becomes more of a document about the breakup of Yugoslavia and reveals its true nature: through the story about the alleged space program, we discover the story about one land that didn’t last long, a land-project that lasted for 47 years (1945 – 1992) in which everything was “too good to be true“.

The film explores the roles of foreign forces in the breakup of Yugoslavia and through the fictional story, it tells us about very real manipulations behind closed doors. Slovene philosopher Slavoj Žižek is our guide through the film’s events and is expectedly great in that part. This film presents to us the complete premise making us question what is reality and what is fiction, leading us to the main point – it’s very easy for people to be manipulated and to have their worldview changed.

“Houston, We Have a Problem” is based on the widespread belief about the existing of the SFRJ space program, believed to be true by many citizens of the countries that were once part of the SFRJ (Serbia, Croatia, Slovenia, Bosnia and Herzegovina, Montenegro, and Macedonia).

The film uses some true facts: cooperation between the US and SFRJ in the various scientific fields, employment of SFRJ scientists in the NASA Apollo program, financial support to SFRJ from the US, and their good relationship during the Cold War (Yugoslavia was never part of NATO or the Warsaw Pact, but was leading neutral politics).

It uses these facts to create an even more intriguing combination of truth and imagination, and as a result, we have a great deconstruction of the conspiracy theories. By connecting the truth (the high standard of living in SFRJ) and mixing it with imagined sale of the alleged SFRJ space program to the US, the film hits right in the center of the target.

Blurring the boundaries between the real and the imagined, the possible and the absurd, this film makes us ask ourselves what is the real truth in all of this, and face the fact that we are very easily manipulated into believing the most wildest things imaginable. And in every lie there is some truth, usually hidden behind and indirectly connected to the theme.

This very intriguing film was directed by Lucile Hadžihalilović, who made her feature film debut “Innocence” 12 years ago. Both “Evolution” and “Innocence” have a lot in common – both films are about childhood and the rituals of growing up, both are set in isolated and ostensibly peaceful places, and both take place completely outside of the everyday reality.

“Evolution” is set on a no-name island populated exclusively by women and boys. One of the boys, Nicholas (Max Brebant), finds a dead body of a boy in the water, covered by a starfish. However, his mother assures him that there is nobody in the sea. That was a lie. After one angry incident involving his friends, Nicholas is taken to the hospital by his mother and soon we find out that the boys from the island are being held in the hospital and operated on for mysterious reasons.

The film’s mysterious and mystical elements serve it well, making “Evolution“ an intriguing horror film. Many questions are raised with some subtle hints, and the film is not confusing in the cheap way – Hadžihalilović definitely knows what she is doing and what kind of the film she wants to make. The grown-ups (here they are women, mostly mothers) are connected in some mysterious way that is not completely explained.

The film follows the logic of dreams, hinting at many possibilities but not giving any final answers, which is, as it’s been said in this case, a plus because it makes the film even more effective, despite the hermetic symbolism. One of the main elements of this film and of the director’s previous film is the questioning of the world of grown-ups from the perspective of children. Also, this is a film about literal evolution, which is the main reason why it takes place by the sea.

“Evolution“ is concentrated on its dreamlike nature, which is one of the main characteristics of the film medium, being an emotional experience above all, but also giving lots of food for thought. As for the horror element, the body horror is the dominant aspect, with lots of very effective moments of Lovecraftian horror. Mystical, creepy, and beautifully shot, “Evolution” is another excellent film in this very promising director’s career.

After “Zwartboek” (Black Book), the excellent drama set during WWII, Paul Verhoeven returned ten years later with his next film, the thriller-drama “Elle“, his first French-language film. Was it worth the wait? Oh yes! Verhoeven showed (as he did in his previous film) that he is still in great form and equally brave, discerning, passionate, and smart like in his older days (in films like “The Fourth Man”, “Flesh + Blood”, “RoboCop”, “Basic Instinct”, and “Starship Troopers”).

“Elle” is his best film in the last 20 years, which is to say from “Starship Troopers” onward. Aside from the director, an equally important element for the success of the film is Isabelle Huppert, who showed once again that she is an actress who’s never afraid to involve herself in controversial material. She created a character to be remembered forever; her Elle is one of the best acting portraits of the current decade, male or female.

Here, she plays neither the victim nor criminal, but very skillfully balances between those two, never falling into one of those two categories. Everything that happens with her character, the way she reacts to events around her and especially to the tragedy that happened to her, are completely without cliched elements.

Verhoeven’s directing is recognizably energetic and provocative; he is still not afraid to push the boundaries and to surprise us with his highly original vision. He and Huppert together created something magical, a film that left us wanting more and one that gives us a lot with every viewing. The only thing we can do is watch it again and wait for another Verhoeven film.

Author Bio: Saša Avramović is a student of Geography living in Jagodina, Serbia. His primary focus of interest is cinema – in his spare time he watches films as much as he can and reads about them. He would like to become a film director (currently making her first short film).