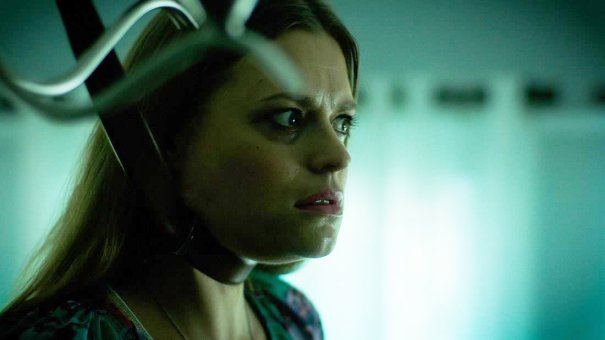 “I feel like I can’t breathe,” imparts desperate housewife Jill (Marianna Palka, who also wrote and directed the film) to her perpetually distracted and utterly assholish husband, Bill (Jason Ritter), in an early scene in the biting new comic drama, Bitch. Palka takes pains and considerable risks with this often confrontational piss-take on the patriarchy, and it’s really a shame that about half the time Bitch backs down and whimpers away instead of having a howl.

When we first meet Jill she’s at her wit’s end as her bustling family (four kids; two in middle school and two in early elementary) and unfaithful hubby (he’s routinely working extra hours shagging kissable co-worker Annabelle [Sol Rodriguez]) endlessly take her for granted. The only thing in Jill’s life that seems to pay her much heed is a neighbourhood dog that, so it seems, only her and her eldest daughter (Brighton Sharbino) appear to be cognizant of, as the whole family hears, but never seems to see.

Before long Jill, who’s made at least one legitimate suicide attempt, unfortunately played for laughs, regresses into a feral-like convalescent, living in the basement, sans clothing, covered in her own feces and filth, snarling and snapping at everyone, including her kids, Bill, and her well-meaning middle-aged sister, Beth (Jaime King).

Bitch works best when it’s an awkward comedy, and it certainly has a number of squirm-inducing scenes. It’s also frequently funny to see Ritter get into some physical slapstick comedy like when he throws a tantrum in his kids’ schoolyard, or when he fetches sticks and romps around with Jill at the dog park. It really is easy to see Ritter’s likeness to his old man, John, and the sex farce elements certainly fringes upon some easily identifiable Jack Tripper-like territory.

It’s just too bad that so much of Bitch isn’t all that compelling or pleasant. Not that it needs to be pleasant –– especially when Palka spends a third of the film mired in actual shit –– but she’s often filmed in overcranked closeups or we see from her ill-effective animalistic point-of-view so that the viewer never really knows how wild she’s actually gone, as it may be a put on.

Ritter seems to dominate the film, and while he’s frequently funny (“I just wish that my dick was smaller, and none of this woulda happened!”), he’s a deadbeat dad and an undeserving spouse, and his aboutface is too predictable and peremptory.

This is Palka’s fourth feature and maybe that’s why it’s hard not to expect something a little more focussed. That said, Bitch does delight in skewering gender politics, being unpredictable, and often miscreant, like a very bad dog indeed. It’s not a bad film, but Bitch never quite gets off the leash, either, and all it really gives us are a lot of so-so scraps.