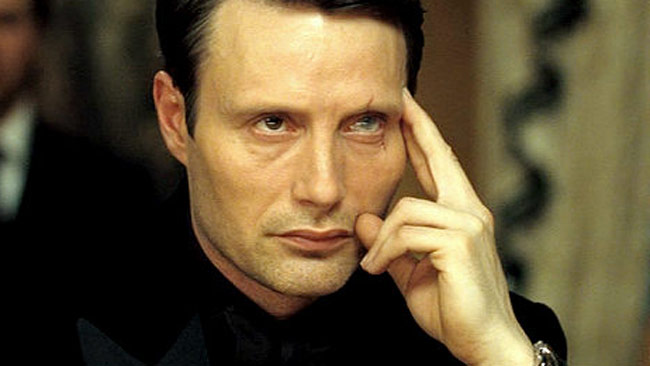 Spanning fifty-five years and twenty-four films, six actors have portrayed 007, and each has brought with them a unique interpretation of the ‘stupid policeman’. Some of their performances have been excellent, joining with superb writing and filmmaking to conjure near-perfect action-espionage masterpieces. Others have been almost jovial- a result of the era and tone of the film in which they appear, but also perhaps a sly acknowledgement of the series’ fading influence.

Whether remarkable or ordinary, these performances are not exclusive to certain actors or periods in time. Moore is best known as the ‘joke’ Bond yet has moments of brilliance in many of his films- moments devoid of raised eyebrow or smug remark.

Dalton, conversely, is remembered as the ‘straight’ Bond, but his films are not without the series’ trademark humour and wit. It’s well-documented that Connery- so iconic as the James Bond of the 60’s- grew weary of the role, and his reappearance in ‘Diamonds are Forever’ was certainly not driven by his love for the character. This shows in his performance, still enjoyable yet so far removed from his pre-Lazenby outings that it almost defeats the purpose of his return.

Lazenby is perhaps the biggest paradox of the entire franchise. Whilst ‘On Her Majesty’s Secret Service’ is widely regarded as the finest 007 instalment, his portrayal of Bond- his only outing as the secret agent- is almost universally considered to be the weakest. This highlights the importance of factors away from the leading man- of course aspects such as design, direction, script and score are vital to an entry enjoying enduring success, but the casting and characterisation of Bond’s supporting company cannot be underestimated. And with each 007 release comes an array of audience expectations with regards to that casting: the ‘Bond-girl’; the henchmen; if applicable- M, Q, Moneypenny; and most importantly- the villain.

Revisiting each film based on the merits of its primary antagonist- its ‘Bond villain’- opens new angles from which to analyse the films. Whilst ‘The World is Not Enough’ remains by no means an essential entry, by acknowledging the unique nature of its villain, a newfound appreciation may be obtained. The villain of ‘For Your Eyes Only’ is difficult to recall, yet perhaps the film’s lack of standing is as much a result of its weak antagonist as the weak antagonist is a result of an under-powered film.

The influence of Blofeld is everywhere of course; the early Bond villains worked for him (except for ‘Goldfinger’) and then the main baddie was him. Legal wrangling’s and new ideas mean he is conspicuous by his absence through the Moore, Dalton and Brosnan era’s, whilst his recent ‘reimagined’ return is the source of much debate. In this list, the ‘original’ Blofeld (‘From Russia with Love’ through to ‘Diamonds are Forever’) has been separated from the Christoph Waltz interpretation (‘Spectre’).

Ranking these villains is an incredible task, disagreement and debate inevitable. Towards the back of the list, all but the most forgettable ‘baddie’- appearing in the lowest points of the franchise (Kamal Kahn, Aristotle Kristatos)- still have their endearing qualities. Some villains have been dragged down by the film in which they appear (Elektra King, Max Zorin), whilst others are rated highly through elevating already-impressive instalments (Trevelyan, Le Chiffre). Some are iconic (Scaramanga, Goldfinger) but a villain’s synonymy with their correlating film is not always a positive thing (Gustav Graves, Elliot Carver).

So, here they all are, ranked and analysed- away from, and as part of, the world they exist in. There will be uproar, certainly, but this is nothing personal. It’s purely business…

22. Aristotle Kristatos (Julian Glover – ‘For Your Eyes Only’)

Stripped back and subdued, ‘For Your Eyes Only’ responds to the delirious excess of Moore’s previous few outings by returning to more grounded espionage thrills, but the results are disappointingly forgettable.

After a much-maligned opening that sees Bond casually dispose of a Blofeld ‘lookalike’, audiences are introduced to a villain who’s essentially the opposite of The Man with the White Cat- understated, underpowered, and unmemorable. Greek smuggler Aristotle Kristatos has no mutilation, vendetta, or taste for terror; his simple aims are limited to working for the highest bidder and pursuing illicit relations with his young ward.

Although his rivalry with Milos Columbo- one of the most exciting Bond allies since Kerim Bay – adds interest, Kristatos lacks the traits to pass as a convincing antagonist. He’s also left desperately wanting in the henchman department- a villain like Stromberg may have been short on magnetism, but he had an underwater lair, he had secret buttons that opened trap doors, and he had ‘Jaws’. Julian Glover may have gone on to prove his worth in ‘Indiana Jones and the Last Crusade’, but here his character is a non-entity in an already unexceptional film.

Daniel Craig’s blond Bond is back, and haunted by the raw events of his previous outing, he’s bruised, bitter and bloodthirsty. Binding the vibrant ‘Quantum of Solace’ so closely to ‘Casino Royale’ does bolster a script that feels frequently undercooked, but by positioning itself as a direct sequel, it’s easy to dismiss this as the ‘difficult second album’ of the reboot era, despite the visceral direction and snappy editing.

As with ‘Le Chiffre’ before him, the bad-guy of ‘Quantum’ is a sub-villain working for a higher power. But unlike his predecessor, Dominic Greene never hints at being more than a one-dimensional pawn, leaving his character to feel like an afterthought in a film that reportedly suffered its share of production issues.

Perhaps with a longer run time than its taut one hour forty-six, Amalric’s portrayal of Greene as a cold, oily yes-man would have had greater impact, but ultimately, as in his final first-fight with Bond, this villain lacks the punch to be remembered as anything other than a footnote. 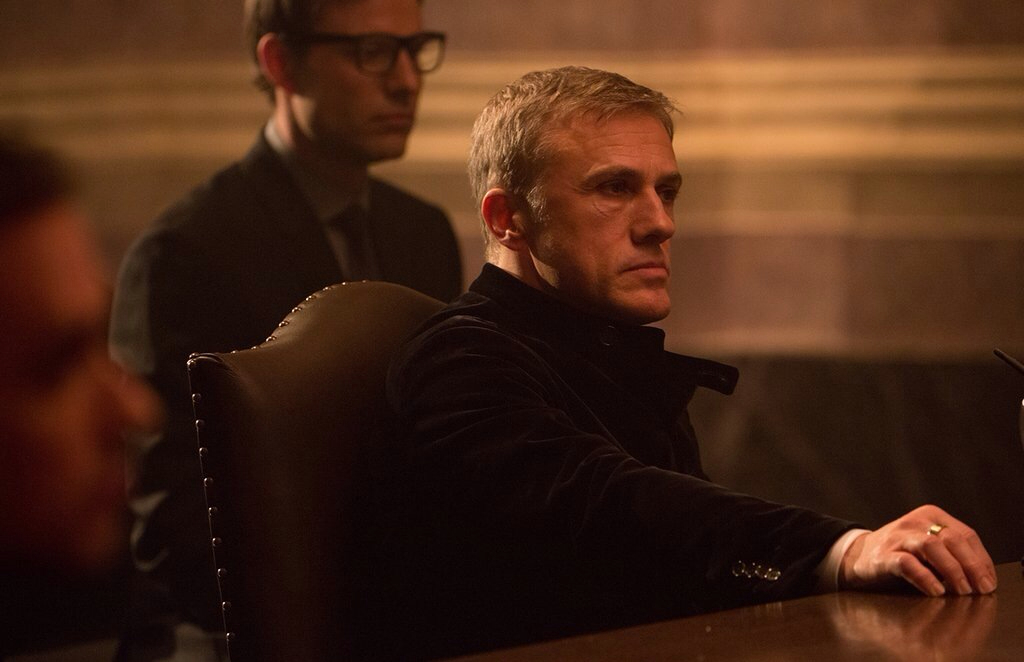 The writing was always on the wall that repeating the success of ‘Skyfall’ would be a challenge, but through their insistence on probing Bond’s childhood once more to create a ‘revelatory’ villain, the returning writers not only failed to match their previous output, but laid the foundation for one of the biggest missteps in 007 history.

In a production plagued by rumour and indecision, the presence of Christoph Waltz was cause for elation; an Oscar-nominated actor with a flair for playing dastardly villains, perhaps he might even trump celebrated predecessor ‘Silva’. And with a script leaked via the Sony cyber-attack, the resolution of a long-standing rights issue, and the film’s confirmed title, fans were sure: Waltz’s casting would mark the triumphant return of supervillain Ernst Stavro Blofeld.

Stern denials followed. Waltz isn’t Blofeld he’s Franz Oberhauser, James’ ‘foster brother’ who’s dead but who isn’t dead and who’s reinvented himself as… Wait. Waltz is Blofeld, and in a pointless twist that offers questions not answers, he orchestrated every event that ever happened to Craig’s Bond. Cuckoo!

Despite its long tracking shot and tall budget, ‘Spectre’ lacks substance; proof that classic character plus talented actor doesn’t always equal glory. Daniel Craig joked after filming wrapped that he’d rather slash his wrists than return as 007, and having experienced the tonal muddle of ‘Spectre’, it’s not hard to see why. 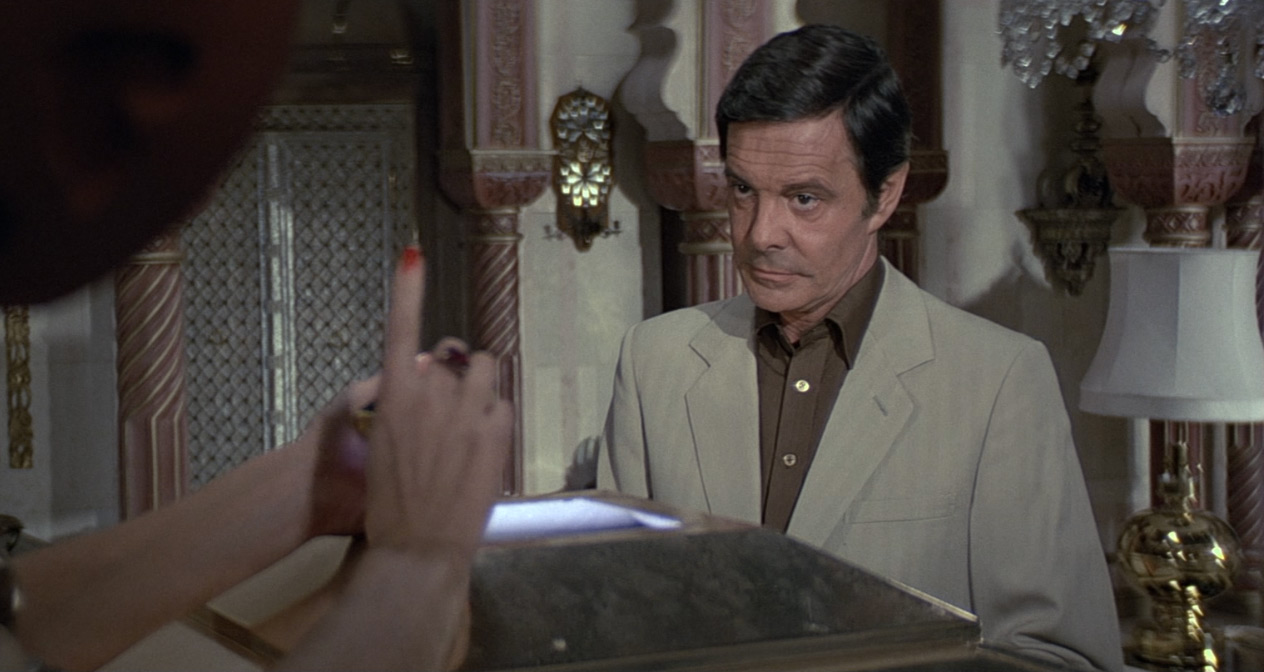 More curio than essential canon, on paper ‘Octopussy’ makes for a memorable Bond instalment. Opening with the assassination of 009, Moore’s penultimate outing features a strong female lead, knife-throwing twins and Kamal Khan, the smooth Afghan prince plotting the West’s demise alongside a murderous Soviet General. The finished film however- convoluted, poorly paced and bloated with camp innuendo- treats viewers to an ageing Bond dressed in gorilla suit, clown costume, and swinging through the jungle whilst perfecting his ‘Tarzan yell’.

As in ‘For Your Eyes Only’, the dull villains on offer here fail to sparkle, and a devilish turn by Klaus Maria Brandauer as Maximilian Largo in ‘Never Say Never Again’, released the same year, highlights their shortcomings even more.

When the exiled Prince Kamal Khan tells Bond he has a ‘nasty habit of surviving’, Jourdan’s smug execution gifts the franchise one of its staple ‘trailer-lines’, but woefully let down by his Oddjob-lite henchman and surprisingly boring accomplice, this unremarkable villain is worlds away from an ‘All Time High’. 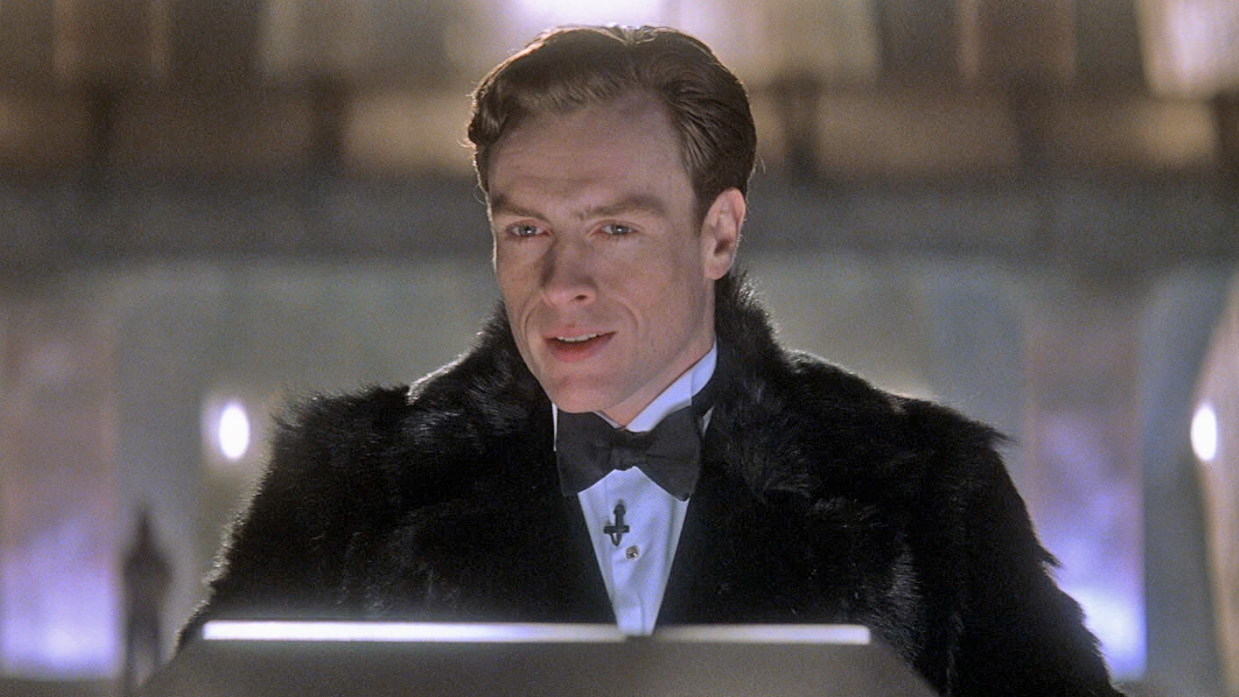 One of the biggest (and only) achievements of ‘Die Another Day’ is that actor Toby Stephens portrays the principle villain as so intensely obnoxious, it’s hard to determine whether it’s the character or actor that’s so unlikeable. That character begins life as North Korean Colonel Tan-Sun Moon (Will Yun Lee), but having seemingly fallen to his doom after a pre-titles duel with Bond, he undergoes ‘gene therapy’ to re-emerge as arrogant Caucasian Gustav Graves. Ludicrous though the Graves story is, it’s just one of many ill-judged elements in an entry so catastrophic it led to a series revamp and the end of the Brosnan era.

At its most acceptable away from ice-cutting sun-lasers and surfing secret-agents, Graves actually provides ‘Die Another Day’ with some of it’s less deplorable moments. When he tells Bond he modelled the ‘disgusting’ Gustav Graves on him (‘that unjustifiable swagger, the crass quips’), audiences are briefly reminded of some of the finer James Bond-Bond Villain interactions. With the benefit of hindsight then, in a film that gave us an ‘electroclash’ theme song and invisible cars sold by Basil Fawlty, perhaps Toby Stephens isn’t so unlikeable after all. 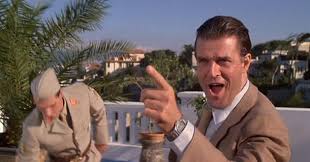 With the Bond franchise increasingly leaning towards self-parody, Timothy Dalton’s arrival as a ruthlessly cool 007 signalled a fresh direction. Part of the actor’s intrigue was his ability to craft believable relationships with every character- General Pushkin (John Rys Davies), Kamran Shah (Art Malik) and Saunders (Thomas Wheatley) all feel incredibly real- and this ability strengthened a less thrilling aspect of the superb ‘The Living Daylights’: its villains.

KGB traitor General Georgi Koskov is as much plot device as character- his playful tone initially betraying his predicament- but once it’s revealed Koskov’s defection to the West is a sham and he’s working with arms dealer Brad Whittaker (Joe Don Baker), the light-heartedness makes sense. Comically charming almost to a fault, it’s testament to Jeroen Krabbé’s performance that he’s remembered whatsoever in a film that boasts so many other fine qualities.