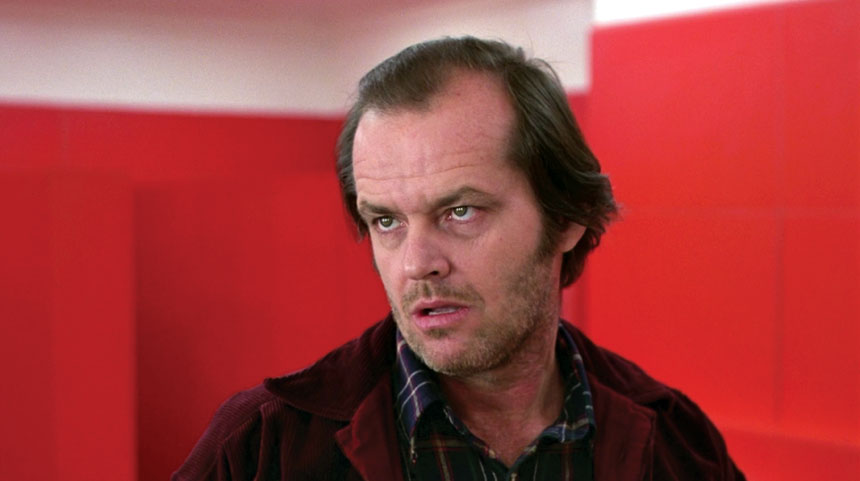 Whenever people leave their house and go out in public, they put on both an outfit and an act to keep up appearances. However, we are all flawed humans at the core, and there is no state of being completely natural and vulnerable, and at our most animalistic and rawest state, as when you are naked. People are undressed in bathrooms as they bathe or relieve themselves, showing that no matter how much society tries to appear perfect, we are all animals with unflattering bodily functions.

Stanley Kubrick was one of the best and most innovative film directors of the 20th century. Whether his films were set in ancient Rome or the technologically advanced future, Kubrick’s characters would always end up returning to the bathroom, regardless of how far mankind has supposedly come in the interim. Bathrooms are both a facility and a social construct that represents the contradiction of people trying to be civilised by going to a private room to do some of their most animalistic acts.

Kubrick was aware of this, and used this fact to show his characters in their most intimate and unflattering form, and to advance the plot. Between his 1960 historical epic “Spartacus” and his exploration of lust with “Eyes Wide Shut” in 1999, Kubrick spent nearly 40 years utilising bathrooms in his films to show that despite the appearances people put on in public, humans will never be the perfect beings they strive to be. 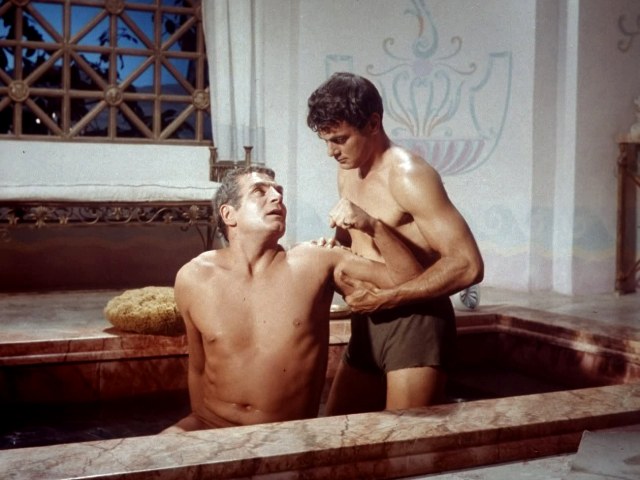 Whenever people discuss the Roman and Greek empires that thrived in the late BC and early AD time period, often the subject of the free and rampant sexuality of that era will come up. Homosexuality and bisexuality were considered just as acceptable as heterosexuality in those days, but they were certainly considered taboo for audiences watching the film in either 1960 or today.

The scene where the Roman general Crassus (Laurence Olivier) has a bath and is washed by his slave Antoninus (Tony Curtis) is a perfect example of this. Crassus attempts to seduce Antoninus by asking him if he likes “eating oysters” or “eating snails”, which are obvious allegories for vaginas and penises.

The fact Crassus is saying this to Antoninus while in the bath when no one else is around shows, even back in the days of the Roman Empire, what a personal act bathing is, and allows Crassus to try to be intimate with Antoninus as he has allowed Antoninus to be with him during such an act by saying what “food” you like to eat is a matter of taste and not about morality.

It also shows that even a grand public figure like a Roman general has basic human needs like keeping clean and satisfying his sexual urges, just like the many faceless soldiers he commands.

This scene has been noted by many for its unsubtle homosexual undertones, which is particularly jarring since Crassus is a Roman general and the leader of rugged and manly warriors, yet he is doing something that many cultures would consider to be very unmanly and homosexual. Crassus is also trying to abuse his power as a general to make Antoninus have sex with him, which would have been common in those days, although Antoninus leaves the room before he can be abused.

This intimate and sleazy bath scene was originally cut from the film’s original 1960 release, assumingly because its subtext was taboo for audiences at the time. The scene was added into the film again upon its re-release in 1991, and it gives the film a whole new feel of the underbelly of forbidden sexuality. 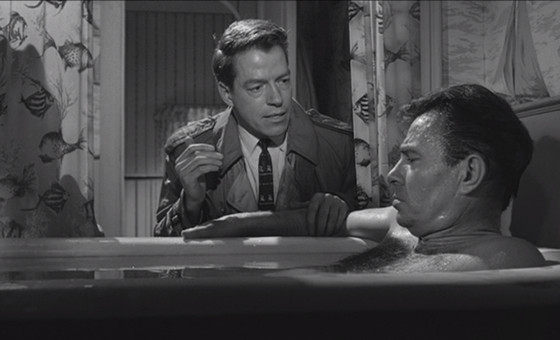 After Humbert (James Mason) marries Charlotte (Shelley Winters), the mother of the teenage nymphet Lolita (Sue Lyon) whom he lusts after, Humbert locks himself in the bathroom to write in his diary and to hide in there to avoid having to have sex with his wife. She cannot intrude on the privacy he needs for both his thoughts and for when nature calls.

On the other side of the bathroom door, Charlotte is worried and says she does not want any secrets between them, but the door is both literally and figuratively a barrier between them. She even asks Humbert if there is another woman in his life; little does she know that it is her own daughter.

This is contrasted shortly after when he does not want to have sex with Charlotte in bed and when she finds and reads Humbert’s diary out in the open, away from the bathroom, revealing his true thoughts and his lust for Lolita.

Moments later, Humbert relaxes in the bath, having a drink to celebrate his wife’s death with some cheery music playing in the background, but is interrupted by his neighbours John (Jerry Stovin) and Jean Farlow (Diana Decker), making the bathroom no longer the safe and private place it used to be for him.

Jean looks away and covers her eyes when she sees that Humbert is naked in the bath, knowing that she has intruded on Humbert’s private time in the bathroom. They see the gun on the basin and think they have interrupted Humbert’s attempt at committing suicide, which is of course another very personal act.

Then the father of the driver that ran over Charlotte comes in to try to weasel his son out of trouble, and provides Humbert with the financial assistance that allows Humbert to pursue Lolita further.

Throughout these peoples’ interruption of his bathtime, Humbert shows very little sadness nor concern about his wife’s death that only happened a scene earlier, showing that he never truly loved her anyway, and now he has one less obstacle in seducing Lolita. 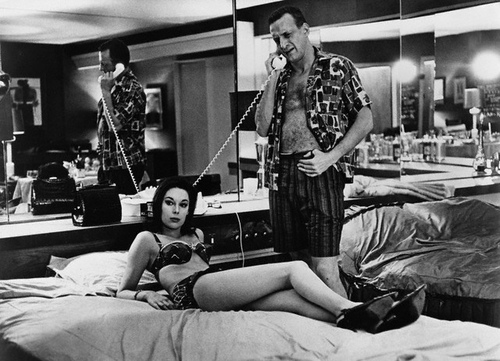 “Dr Strangelove” is a dark comedy about Cold War era paranoia and the threat of nuclear apocalypse started by either the American or Russian armies. While the film covers some very serious subject matter through the lens of an absurdist comedy, even the military men with the fate of the world in their hands retreat to the bathroom to get away from their troubles.

When General Turgidson (George C. Scott) is using the toilet, he is interrupted by his secretary and mistress Miss Scott (Tracy Reed), and by his tone of voice, he is clearly infuriated when his personal time is interrupted by the outside world, specifically work.

Miss Scott admits to the caller that Turgidson is in the “powder room”, one of the many expressions for using the toilet, showing that the fact the Turgidson is doing a natural act that everyone in the world does is too embarrassing to say without using a euphemism.

Later on in the film, General Jack D. Ripper (Sterling Hayden) is fighting against soldiers trying to capture him with only Group Captain Lionel Mandrake (Peter Sellers) by his side. Ripper confesses that he launched the missiles because of his theory that the “precious bodily fluids” of Americans was compromised by Russians, as he is sexually impotent and could not ejaculate, which is akin to the other bodily functions that society tries to hide by concealing them in bathrooms.

Ripper locks himself in his private bathroom and shoots himself without giving the CRM code to Mandrake to stop the nuclear missiles from destroying the world. As Ripper was delusional, it is fitting that he killed himself in the bathroom, as the sacredness of the bathroom within society provided him a way out of both his immediate problems and his life.

Although the real year 2001 has passed and was nowhere near as futuristic as this film predicted, the depiction of technology in “2001: A Space Odyssey” that allows people to work in space is still a marvel to look at nearly 50 years after being made. However, despite the millions of years that passed between the opening scenes in prehistoric times and the society with technological advances, one thing that did not change in all that time was people’s need to relieve themselves.

A very brief but amusing moment in the film is when astronaut Dr. Heywood Floyd (William Sylvester) has to study the long and complicated list of instructions to use the zero gravity toilet. The look on Floyd’s face is both of feeling overwhelmed and busting to go to the toilet. This moment takes place after the audience is shown around the impressive space station and how it defies gravity, but one thing it cannot defy is the body’s need to expel human waste.

But a more serious bathroom scene toward the end of the film occurs after astronaut Dave (Keir Dullea) has travelled through the vortex of strange and colourful visuals and ends up in a fancy apartment and enters the bathroom. He looks into the mirror and sees that he is now rapidly aging, which he continues to do throughout the scene. This depicts the ultimate form of despair in humanity and nature, in that we all inevitably get older and slowly age towards death. 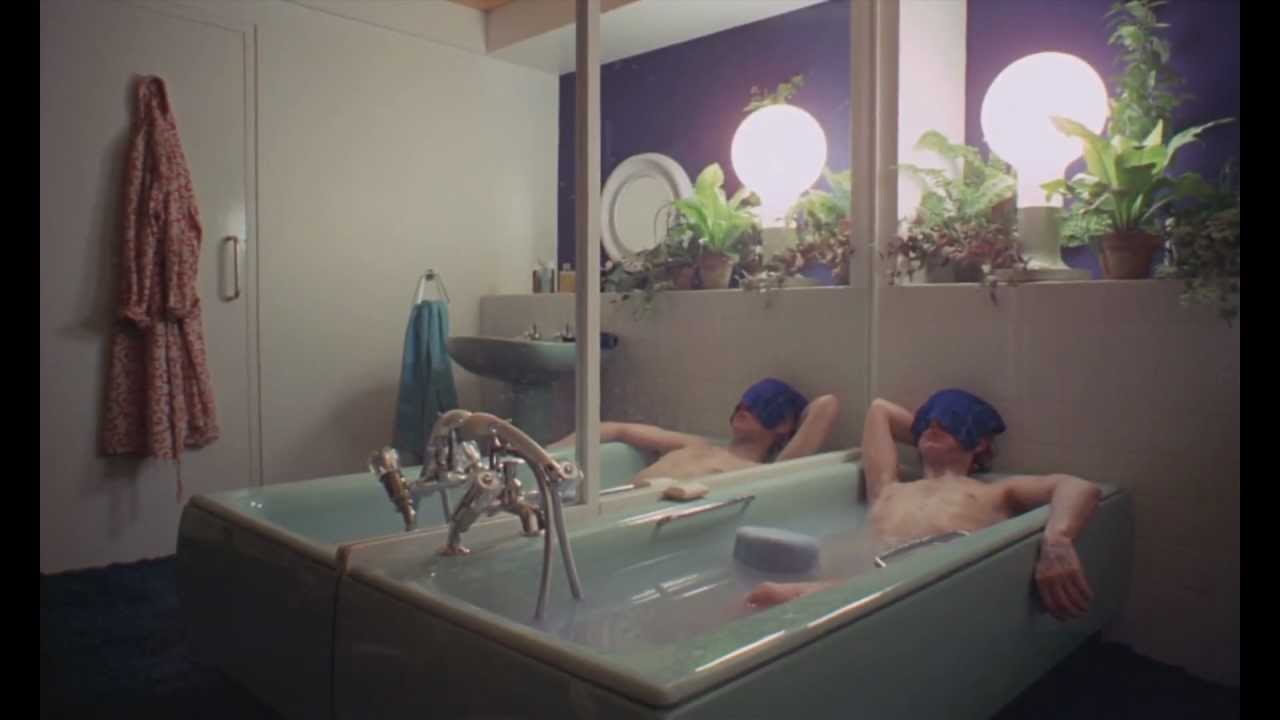 One aspect of having a bath that people enjoy is how relaxing it is, letting people sometimes nod off or daydream. Despite having gone to prison for hurting innocent people and receiving the Ludovico Technique that messed up his psychology, this relaxation was young criminal Alex deLarge’s (Malcolm McDowell) undoing.

After being assaulted by his former victims and accomplices, Alex is taken in by Mr. Frank Alexander (Patrick Magee), who Alex had crippled and whose wife he joyfully raped at the start of the film. Mr. Alexander does not recognise Alex and only knows of him through the newspapers for undergoing the Ludovico Technique. However, Alex does recognise Mr. Alexander and naturally keeps his mouth shut.

But when Alex gets too comfortable while taking a bath, he thoughtlessly sings “Singin’ in the Rain”, which was the same song he sung while assaulting Mr. Alexander and his wife years earlier. This reveals Alex’s identity as the thug who ruined Mr. Alexander’s life, and the look on Mr. Alexander’s face upon realising this is unforgettable. In this instance, the bathroom is not the safe space that Kubrick’s characters think it is.