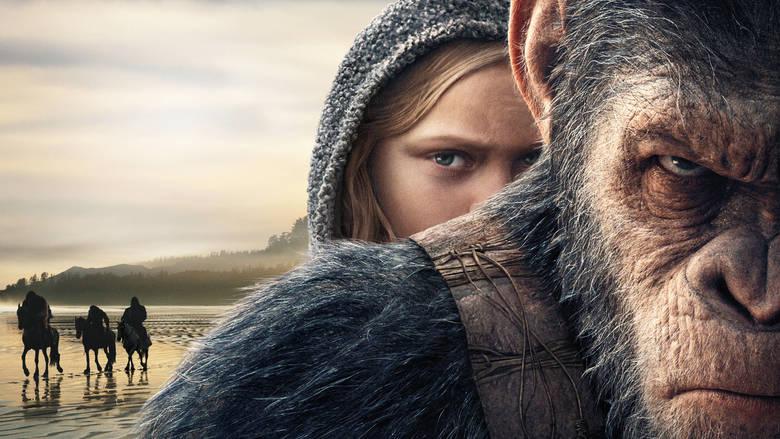 In the eerie opening scene of Matt Reeves’ wonderful new film “War for the Planet of the Apes,” a pack of human soldiers hides in a forest, waiting to attack a group of horse-riding apes who look strange, even menacing, from a distance. Yet from harrowing start to moist-eyed finish, “War” draws us close to its highly evolved title characters, daring us to look into their eyes and declare that they’re less civilized, cunning, and compassionate than we are.

Typically, sequels don’t dare audiences to do anything besides sit back and stare at stale, zombified genre tropes. But 2017 has hardly been a typical year for movies (any year that plays host to “Dunkirk,” “The Lost City of Z,” “Song to Song,” and “Wonder Woman” is off to a scorching start) and “War for the Planet of the Apes” is hardly a typical franchise installment. It’s too brutal, honest, and heartfelt to deserve that classification.

It is, in other words, the finest sequel of 2017 so far (note to “Blade Runner 2049” director Denis Villeneuve: your move). Here are eight reasons why.

1. It offers an unforgettable and insightful portrait of a post-apocalyptic Earth

By the time that “War of the Planet of the Apes” begins, humankind has become a specter of itself. The scientific exploits of Will Rodman (James Franco) may have unleashed ultra-smart apes like the noble chimp revolutionary Caesar (Andy Serkis, who leads a cast of ape portrayers who act via motion capture so bedazzling that “seamless” is too crude a descriptor) in “Rise of the Planet of the Apes” (2011), but they also led to the creation of the so-called Simian Flu, which decimated a vast swath of the human race. As a result, our species has been apparently been reduced to little more than two warring military gangs, one of which is led by the Colonel (Woody Harrelson), a crazed dictator who in one scene fondly recalls the time he shot and killed his son.

A hefty chunk of the film follows Caesar and several of his ape allies (including the kindly, billowing orangutan Maurice, who is effortlessly embodied by Karin Konoval) as they search for the Colonel, who has slaughtered Caesar’s wife Cornelia (Judy Greer) and his eldest son, Blue Eyes (Max Lloyd-Jones). To find him, they have to wander across a world that seems to have lost its industrial sheen—there are no cities or towns in sight and the most notable remnant of the America we know and love/hate is a battered, ancient-looking Coca-Cola truck.

It’s a world that may, for some viewers, recall David Denby’s dismissive description of the largely unspoiled moon Pandora in James Cameron’s “Avatar”: “True, there’s no reality TV or fast food, but there’s no tennis or Raymond Chandler or Ella Fitzgerald, either.” Then again, you could reverse Denby’s argument in the case of “War.”

The Earth depicted in the film may not have any ice cream sandwiches or “Star Trek” DVDs (to each his or her own favorite vestiges of commercial civilization!), but there’s no factories or freeways either. In an oddly beautiful way, this shattered shell of the Earth is a wonder because there’s room to stop and relish the kinds of magnificent details that get smothered by the average megalopolis, like the sound of waves washing against a shore when Caesar and Maurice discover a young, mute, and apparently orphaned girl (the astonishing Amiah Miller, who recently turned 13).

At Maurice’s calm insistence, she is adopted into an ape family that soon expands to include Bad Ape, a chimp who wears a sporty vest for most of the film and is played by Steve Zahn (who beautifully injects the character with goofy bravado) and presents the girl with a gift: the shiny logo of a Chevy Nova. It’s a wink at the original “Planet of the Apes” film from 1968, which is based on a novel by Pierre Boulle and also featured a character named Nova—a name that, sure enough, the girl in “War” seems to adopt.

Yet this isn’t the same kind of fussy foreshadowing that made Matthew Vaughn’s “X-Men: First Class” so irritating; it’s a statement about the film’s faith that the Earth can be bettered. The Nova logo may have once adorned something to be bought and sold, but in “War,” it becomes a comfort to a frightened girl, serving a higher purpose in the same way that the apes live more principled (and more ecologically responsible) lives than their human rivals.

The logo, in other words, encapsulates the possibility that the de-coporatized, rewilded realm of “War for the Planet of Apes” is not only a fallen world, but a better world.

2. It explores divisions on both sides of the apes vs. humans war 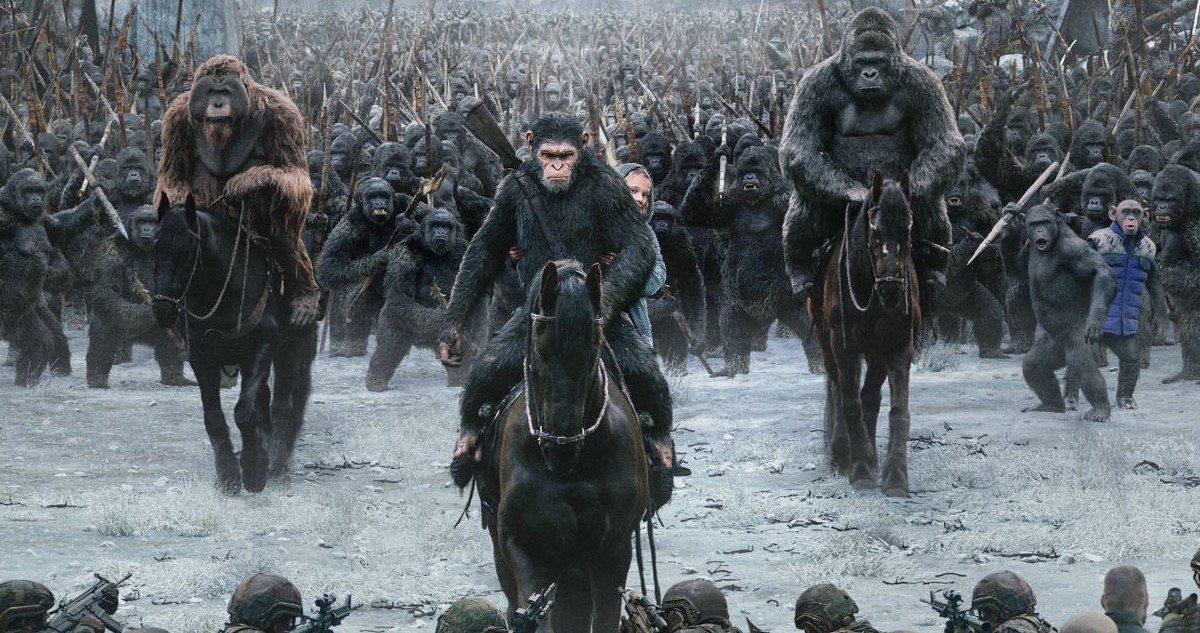 The best summer blockbusters are explosion-filled milestones in what could pretentiously (and aptly) be called “the cinema of moral ambiguity.” The original “Star Wars” trilogy tested Luke Skywalker by revealing thwarted goodness beneath Darth Vader’s gleaming mask; the Jason Bourne series showed an ex-CIA assassin trying to atone for his in-cold-blood crimes; Sam Raimi’s “Spider-Man” films tapped the rippling tension between Peter Parker’s steely code of honor and his selfish (and completely understandable) desire for friendship, love, and intimacy.

And now we have “War for the Planet of the Apes,” which muddies its moral waters with a fascinating depiction of infighting among apes and humans alike (thanks to the film’s multilayered screenplay, which Mr. Reeves wrote with Mark Bomback). The war of title, it turns out, is not just about two factions trying to tear each other’s throats out, but how both sides are confronted by a war at home.

Among the apes, discord has taken root thanks to the now-dead Koba (Toby Kebbell), the chimp and ex-laboratory specimen who emerged as Caesar’s nemesis in 2014’s “Dawn of the Planet of the Apes” (which Reeves also directed). In “War,” he has been reduced to a taunting apparition in Caesar’s nightmares, but his embittered, tarnished spirit lives on in the Koba followers who have chosen to side with the humans rather than submit to Caesar-administered justice.

It’s chilling to watch these apes reduced to little more than property (the heart-breakingly dehumanizing designation “DONKEY” is written on their backs). But if their chosen path has resulted in a tragic rift among apekind, the humans are in no position to judge, since many of them are so alarmed by the Colonel’s ruthlessness (more on that later) that they decide to attack his snow-crested military base.

The apes and the humans, in other words, are not monolithic opposing forces—they’re factions riddled with factions. And in age an age when America (where “War” is set) is split into so many warring tribes (Bernie Democrats, Hillary Democrats, Trump Republicans, anti-Trump Republicans, anti-everything Americans sick of the whole thing), that’s both painful to watch and profoundly apt.

3. Its visual effects are peerless 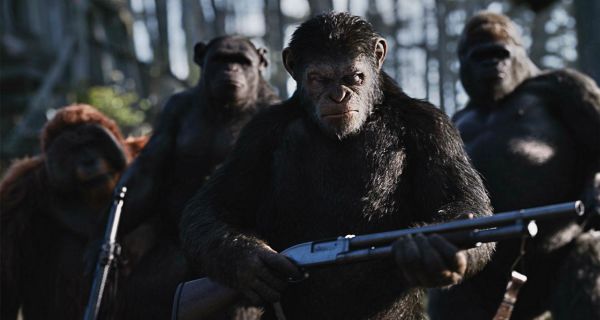 One of the less-forgivable Oscar blunders of the current decade is the cringe-worthy 2012 moment when Ben Stiller and Emma Stone presented the Academy Award for best visual effects to “Hugo,” Martin Scorsese’s smarmy, over-determined reconstruction of Brian Selznick’s novel/graphic novel “The Invention of Hugo Cabret.” The injustice still stings, not only because “Hugo” didn’t deserve the award, but because “Rise of the Planet of the Apes” deserved it more.

There’s little left to say about gobsmacking effects in “Rise”—doubtless you’ve heard critics sigh over the amazingly graceful movements of the apes, or the fur so textured that you could imagine reaching a hand through the screen and running your fingers through it. But it is still refreshing to report that with incomparable aid from the special-effects company Weta Digital, Reeves has cemented and expanded the sterling breakthroughs of “Rise.”

You see that not only in the remarkable scenes where Serkis and Harrelson’s menacing interactions transcend their flesh-and-pixels origin, but in each glimpse of Caesar’s beautifully expressive face, not least of all when he passes judgment on a group of captured humans. The stoic anger and determination set into his hardened, bearded visage is captured so clearly by Serkis and Weta that instead of thinking about how Caesar is largely a child of CGI, you simply believe in him as a man determined to defend his species and his family. If (as before) the Oscars can’t be bothered to honor that achievement (both Serkis’ and Weta’s), it’ll be their loss.

4. It explores the folly of putting your faith in a single leader 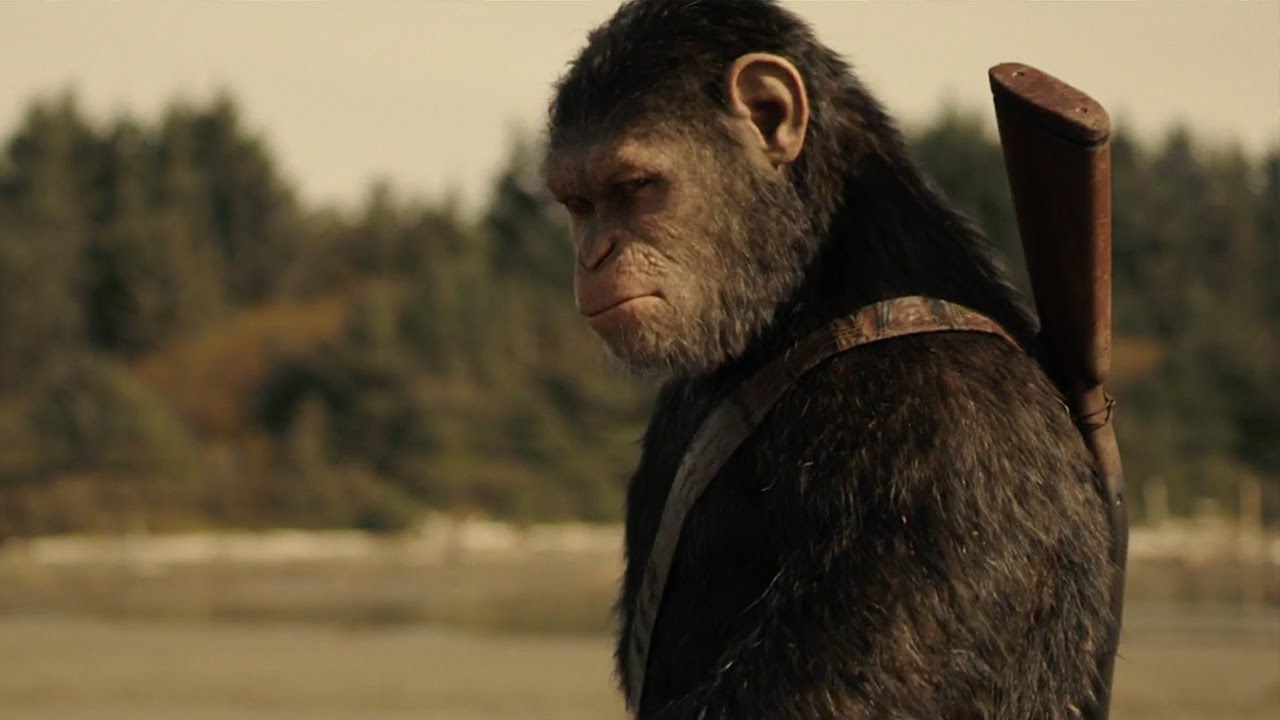 It’s hard to believe that there was a time when James Franco was the marquee star of “Rise of the Planet of the Apes.” The shimmer of his presence may have helped lure viewers to what at the time seemed like a dubious franchise resuscitation, but for all his talents (and any actor who can leap lithely from “Spider-Man” to “Spring Breakers” is talented), he was eclipsed by Serkis’ Caesar long before he left the franchise.

That said, you could argue that Caesar himself becomes eclipsed in “War.” He may command the respect of many of his fellow apes—he is their paterfamilias, their general, their spiritual icon—but after the deaths of Cornelia and Blue Eyes, he becomes tormented and vengeful, which blunts his effectiveness as a leader. As a result, “War” is able to explore how Caesar’s comrades fill the leadership void he leaves behind and tellingly refuses to pit Caesar against the Colonel for a climactic, mettle-testing confrontation (at least a physical one). Neither man gets to determine whether their species will flounder or flourish—that responsibility falls to their followers.

All of which seems to be Reeves’ way of suggesting that there’s folly in placing your faith in a single leader. Quite rightly, he prefers the communal heroism of characters like Maurice, Nova, and Bad Ape—people who band together, fight for survival, and, you know, actually get things done.