One of the most iconic films of this era is Akira Kurosawa’s “Seven Samurai”, considered among the most influential movies of all time, and the basis for a plethora of productions, with John Sturges’ “The Magnificent Seven” being a direct adaptation.

This influence became widely known, even at the time, as the film was nominated for two Oscars (Best Art Direction-Set Decoration, Black-and-White; and Best Costume Design, Black-and-White), while Kurosawa won the Silver Lion at the Venice Film Festival.

Here are eight reasons that justify the place the film holds, even nowadays, in world cinema. 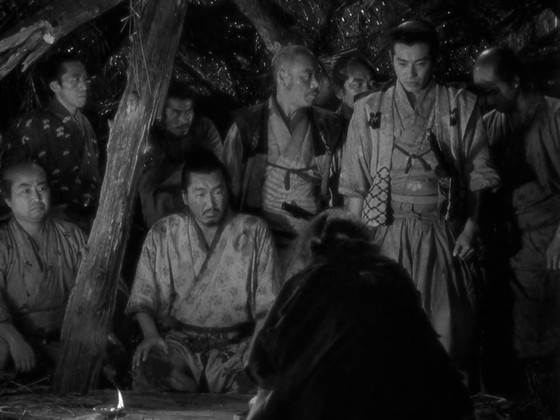 In 16th century Japan, during the feudal wars, an entire village is on the border of starvation due to the constant raids by a gang of armed robbers. When a villager learns, by chance, that the gang is planning to steal their whole crop during the harvest, the desperate inhabitants decide to ask for protection. Their “choice” is Kambei, a ronin who has fallen on hard times.

Despite the fact that they only offer three meals a day, he accepts and even finds six more samurai to help, with the last one, named Kikuchiyo, being the most colorful. The samurai try to train the villagers and to organize the village’s defense, although the obstacles seem to be constant. The film reaches its apogee in the final sequence, with the gang’s raid.

Through this script, which Kurosawa penned along with Shinobu Hashimoto and Hideo Oguni, the Japanese master presented his ideas on a number of social issues. These include the concept of the samurai and of the peasants, which are presented in a completely new light, which shattered the image they held for the public, particularly the latter.

Furthermore, his notions about chivalry and self-sacrifice are also presented, along with the realistic depiction of the circumstances of the era. The script allowed Kurosawa to combine action and substance in an elaborate fashion that allowed the film to be both entertaining and meaningful.

Kurosawa took the essence of “Rashomon” and elevated it to a higher level with “Seven Samurai”. Here, only the acts that derive from emotion are considered valid, and as such, original. Kurosawa managed to present this truth through violent physical action, in a fashion that keeps the film meaningful and entertaining at the same time.

His main message is eloquently depicted in the final scene, where the remaining samurai are standing to the mound where their comrades are buried. As the farmers ignore them in order to proceed with their work in the fields, Kanbei says to the other two that they have lost again, and in their silent question, he elaborates that they lost, since the farmers are the real winners.

The message is obvious – although people can try to cooperate, absolute equality is impossible. There will always be winners and losers, even among the winning side. All the magnificent scenes and sequences of the film actually lead toward this truth, but the audience cannot realize that until the end, captivated by the masterful direction.

Furthermore, despite its long duration, the film’s pace is quite fast, as Kurosawa highlights, with his direction, the story and the characters.

3. Disillusioned presentation of the samurais 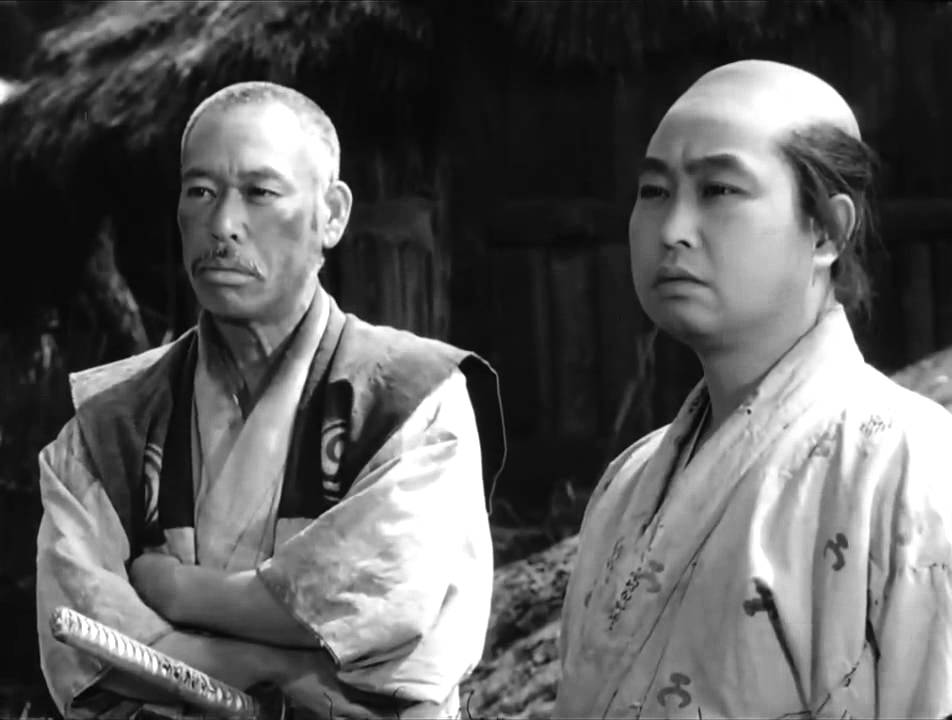 For centuries, the members of the caste of samurai were considered noble heroes and warriors, individuals that had nothing to do with those in the lower castes, icons of chivalry and virtue. This image started “crumbling” after the end of World War II, but Kurosawa gave it a major hit with the way he depicted them in the film.

Kikuchiyo eloquently expresses Kurosawa’s perception for samurai in the scene where he brings the armor of a dead samurai to his comrades. He accuses them for the despair their way of living has brought upon the farmers, who were the most numerous, but also the most tormented group in the feudal Japan of the 16th century.

According to him, their constant battles have ruined the land, stripping the farmers of fields to plant their crop. The taxation the shoguns force upon the villagers to finance the wars of the samurai barely allows them a meager income to live. Furthermore, they frequently forced the villagers to leave their fields in order to do the jobs deemed unworthy by the samurai. Lastly, the constant raids by the occasional conflicting forces strip the rest of the population of the little they have left.

In a different kind of criticism, Kurosawa portrays the samurai as naive, since they easily fall for the tricks of the cunning but illiterate samurai. The fact that Kikuchiyo, who is not a samurai, eventually becomes one of them, as they do not realize he is the son of the farmer, also moves toward this direction.

However, in the end, he elevates them as they are portrayed as heroic and highly competent warriors who are not afraid to sacrifice themselves.

4. Realistic presentation of the villagers 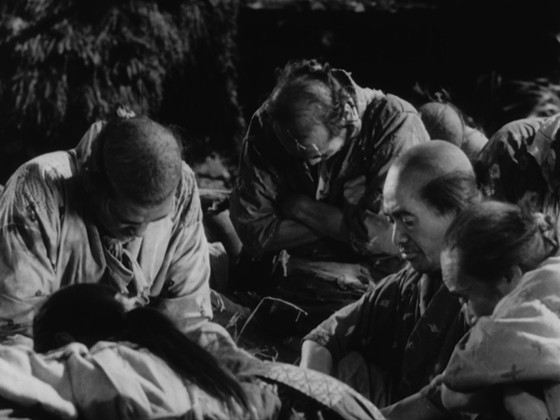 On the other hand, Kurosawa does not exemplify the villagers either, despite their circumstances. He portrays them as cunning, cheating individuals who are always ready to go to extremes in order to survive. These traits become even worse, since they take advantage of the samurai who agree to give their lives for them, just for three meals a day.

However, as in the case of the samurai, he manages to elevate them through Kikujiro, a man who eventually proved at least as chivalrous and competent as the actual samurai.

The film features a number of scenes, all of which are impressive and meaningful; notably, the one with the “fake” duel in the beginning, which eventually results in the death of one of the two fighters. However, the one that truly stands apart is the final one, between the combined forces of the samurai and the villagers, and the bandits, which takes place in heavy rain.

The pacing is short and curt in its presentation, and along with the jump cuts and the cutting on action, it demands the audience’s full attention while retaining the agony until the end. When each of the sequences end, Kurosawa uses wide shots to stress the fact, and also to release the tension.

This becomes particularly visible at the end of the film. Furthermore, the quick cutting and the use of telephoto lenses stresses the chaotic and claustrophobic feeling the scene emits.

Due to the above, the scene has been hailed as one of cinema’s greatest action sequences. 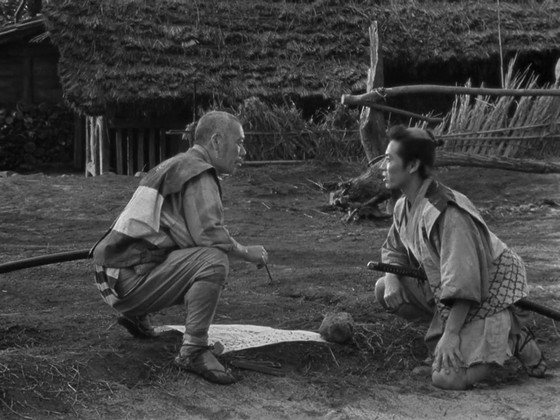 Kurosawa has been hailed as “the world’s greatest editor”, and his prowess in the field is magnificently displayed in this movie, and particularly the aforementioned scene.

Here, every cut seems to serve a purpose, and the editing serves as a tool of continuity in order for the audience to understand what and where is happening. Kurosawa managed this continuity by using multiple cameras in the scenes, which allowed him to edit with utter precision, despite the fact that the action follows multiple storylines and occurs in different places in the village.

Another technique he uses is the quick editing, which keeps the pace short and crisp, not letting the audience look away from the screen even for a moment. The jump cuts and the cutting on action also serve the same purpose, while a number of wide shots injected in the sequence help to release the tension, although for a brief time. However, even these shots eventually create drama and tension.

Furthermore, as I mentioned in the previous paragraph, the quick cutting and the use of telephoto lenses stresses the chaotic and claustrophobic feeling the scene emits. Lastly, the fact that the scene begins and ends with a shot of the samurai banner gives a wonderful conclusion, which emphasizes the completion of the circle created by calmness and tension. 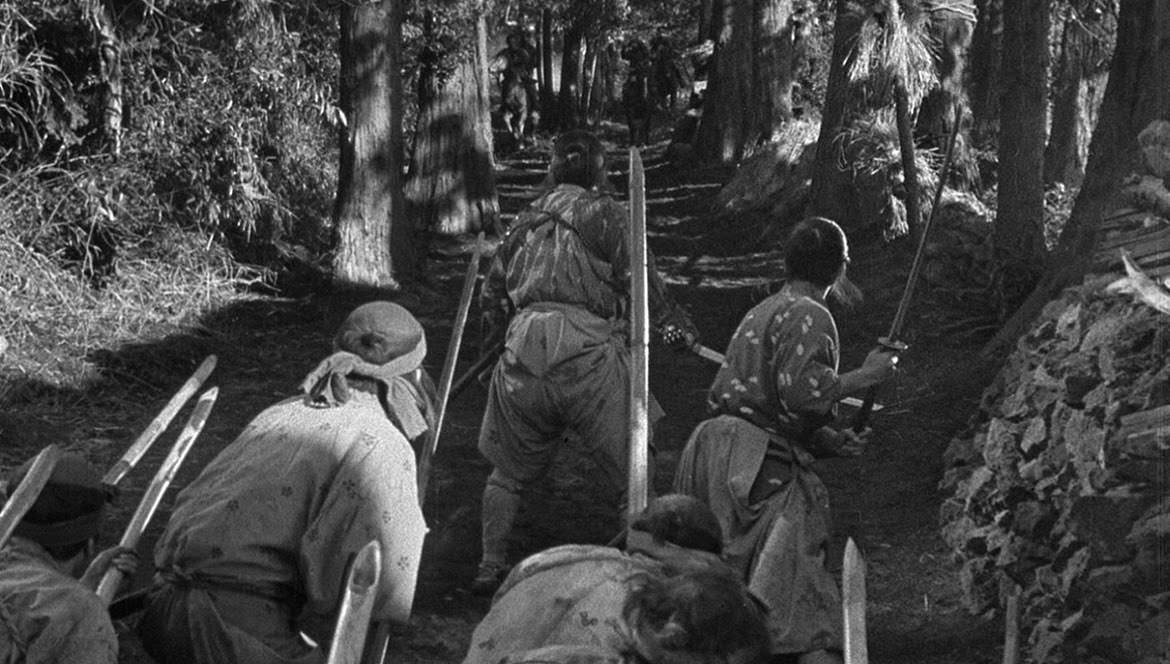 Kurosawa created a new style, as he used telephoto lenses to capture detail for the first time. He also used multiple cameras, each shooting the scene from a different angle, and this allowed him to cut directly from one perspective to the other without stopping the action. This method used enormous quantities of film, thus being very costly, but Kurosawa preferred it for the freedom it gave him to keep the angles he chose.

One of his particular trademarks, the use of human tides, sweeping down from higher places to lower ones, is also present here, and highlights his ability to follow the action instead of editing it in separate shots. Along with a number of meaningful close-ups, and the use of deep focus in order to portray multiple actions in the background simultaneously, the film’s cinematography is one of the biggest achievements of world cinema.

Toshiro Mifune is the film’s obvious star as Kikuchiyo. Kurosawa managed to contain his usual hyperbole in acting by drawing a role for him, specifically tailored to his method, as Kikuchiyo constantly overreacts. This trait is particularly visible in the scene where he presents the armor of the dead samurai, as he first criticizes the villagers and then his comrades, and in a funny sequence, at a flock of children who wanted to play with him.

The greatest performance, however, comes from Takashi Shimura as Kanbei, who, once more, exemplifies his ability to play radically different roles. His biggest trait is that he manages to portray a variety of emotions simply with his eyes, without any extreme movements or gestures.

Isao Kimura is also great as Katsushiro, the most inexperienced of the samurai, who idolizes Kanbei. His scenes that stand out are the ones where he expresses his awe of Kyuzo and the subsequent devastation when he is killed, and the one where he kills for the first time.